Most of India's estimated 1.2 billion people have to pay for medical treatment out of their own pockets. In our continuing series on health financing, Patralekha Chatterjee reports on a scheme that is providing health care to families living below the poverty line.

Over the past year, 28-year-old Parameshwari Arun, a part-time maid in south Delhi, has borrowed the equivalent of US$ 1000 to pay for her six-year-old son's medical treatment. Despite this expenditure, they still do not know what ails their son or whether he is likely to get better.

"This medical problem, which started innocuously when my son Vigneshwaram came home from school one day complaining of a pain in the leg, has thrown our family finances out of gear," says Arun. She and her husband, a chauffeur, together earn about US$ 250 a month, barely enough to feed a family of four in Delhi.

The Aruns are not covered by health insurance, so the unforeseen expenditure on doctors' fees, tests, medicines and their son's hospitalization has strained their finances. The couple, which has one other child, live in Dakshinpuri, one of several resettlement colonies established in the late 1970s for rural migrants who previously were forced to squat alongside open drains, river banks and railway tracks in India's capital.

About 10 kilometres from Dakshinpuri, 40-year-old Sunita Gupta, a shack dweller, flashes her biometric smart card. It is one of her most prized possessions, giving her access to the government-sponsored National Health Insurance Scheme for families living below the poverty line. 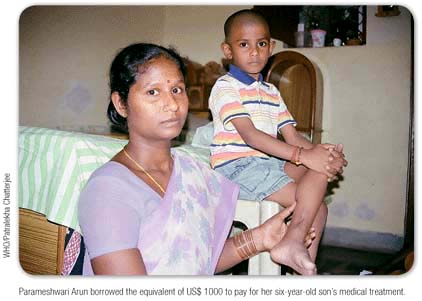 The National Health Insurance Scheme was launched by India's Ministry of Labour and Employment in April 2008. "Recently, I had to have an operation," says Gupta. "I went to a private clinic. The smart card took care of the hospitalization charges. Now I am back at work. This cashless insurance scheme is a big help."

Arun and Gupta exemplify the emerging challenges and opportunities in India, where the majority of the estimated population of 1.2 billion  spread across 28 self-governing states and seven territories within the federal republic  does not have access to quality health care.

One of the major reasons that India's poor incur debt is the cost of health care. "Less than 15% of the population in India today has any kind of health-care cover, be it community insurance, employers' expenditure, social insurance etc," noted a July 2009 report by the Federation of Indian Chambers of Commerce and Industry.

"As a percentage of GDP the overall health expenditure in India is low," says Dr Varatharajan Durairaj from the World Health Organization's Department of Health Systems Financing. It was estimated to be 4% in 2008, according to the most recent National Health Accounts. Given that the government share of health spending is low, out-of-pocket payments are the dominant source of health financing.

India's health-financing system is much more complex than those found in other developing countries. It does not fit into the definition of a tax-based or an insurance-based system. It is still evolving," says Durairaj. "The flow of money from communities, philanthropists and households, for example, is not well documented. While the amount and flow of government spending are known to a larger extent, estimates on private spending are based on responses from surveys of households. However, the estimated share of household out-of-pocket expenses in total health spending is one of the highest in the world, with more than US$ 40 billion spent."

There are centrally funded schemes, but public health care is largely the responsibility of state governments, and financing varies from state to state. "Workers in the organized economic sector in India make up less than 10% of the total workforce," says Ravi Duggal, a senior trainer and health analyst with the International Budget Partnership, which aims to reduce poverty and improve the quality of governance around the world. "Corporate insurance schemes are insignificant, though in numbers, given India's size, they may sound huge."

"The biggest challenge is getting this unregulated and unorganized system under a single umbrella for providing universal access," says Duggal. "The reining-in process is not going to be easy as many of the schemes' operators are too accustomed to being unregulated. But the world over, the only solution is organizing the entire health system of a country under a single-payer mechanism that regulates it. All resources are pooled in a single authority, such as the National Health Insurance in Canada or the National Health Service in the United Kingdom. Brazil and Thailand have also moved in this direction."

In India, financing outpatient care for the poor is a key concern. Financial constraints cause many to skip antenatal care or postpone treatment for minor ailments. In response, the Federal Government's flagship National Rural Health Mission has used conditional cash transfers to give money to households in return for specific actions, such as regular attendance at school and health clinics, and participation in immunization campaigns.

While debate continues on the best model for India's health-care financing, initiatives such as the National Health Insurance Scheme are getting off the ground. "About 75% of the financing for this scheme is provided by the national government, the remainder by state governments," says Anil Swarup, the director general of labour welfare in the Federal Ministry of Labour and Employment. "The National Health Insurance Scheme is doing well. In the Garhwa district of Jharkhand state, for instance, there has been 80% enrolment of beneficiaries. The private sector is playing a critical role in the National Health Insurance Scheme. In some places, such as Kerala, it has increased the earnings of government hospitals, and some institutions are using the money to strengthen their infrastructure." 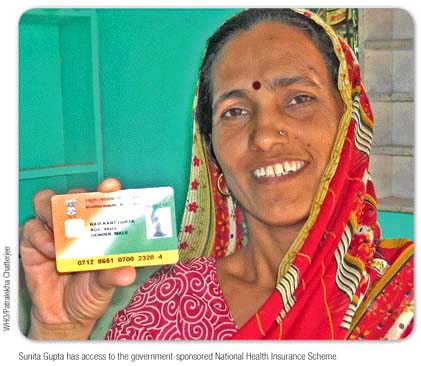 The scheme aims to protect households living below the poverty line from liabilities arising from hospitalization. Beneficiaries are entitled to up to 30 000 rupees (US$ 640) of cover for most of the diseases that require hospitalization. Coverage extends to five family members, including the head and spouse and up to three dependents. Beneficiaries pay less than US$ 1 to register. The central and state governments then pay the premium to the insurer, which is selected by the state government.

Participating households can choose between public and private hospitals. Every beneficiary family is issued with a biometric smart card that stores members' fingerprints and photographs. After the insurance company is selected, it must engage both public and private health-care providers based on prescribed criteria. These hospitals are required to install the hardware and software to process smart-card transactions. The scheme provides an incentive to everyone involved.

"There have been three evaluations of the National Health Insurance Scheme to date," says Swarup. "They were conducted in Kerala, Delhi and one district in Uttar Pradesh. The satisfaction rating was 90% (good to excellent) in Kerala, 86% (good to excellent) in Delhi, while Jaunpur district in Uttar Pradesh showed a 70% satisfaction rating. We are collating the feedback from the field and using it to improve the design of the scheme."

The National Health Insurance Scheme has distributed more than 15 million smart cards across 26 states, covering more than 55 million people. But as it scales up, it is facing challenges on several fronts.

"We have to build capacity at every level  hospital, bureaucracy, insurance companies  for effective implementation of the scheme," says Swarup. "Second, there is a need for greater awareness of the scheme among the public. Third, we need to improve quality of services at the hospitals. Until there is a buy-in at every level, it will not be a huge success."

Arun Nair, a researcher at the Delhi-based National Health Systems Resource Centre, says the information gap between patients and hospitals needs to be addressed. Many patients are not fully aware of their entitlements, and can be exploited in the absence of standard treatment guidelines.

Ish Kain, a National Health Insurance Scheme field coordinator in Gupta's neighbourhood of Tigri, agrees: "Many patients are semi-literate or illiterate. They are not aware of the full range of benefits under the scheme, nor aware of their rights. Sometimes hospitals take advantage of their ignorance."

"I did not have to pay for my uterus operation," says Gupta, "but I was charged for diagnostic tests." She is not sure whether such tests are paid for under the scheme, and in any case, has not been given any receipts.

Despite these problems, the scheme offers some hope to the poor of India requiring affordable health care. "The National Health Insurance Scheme is the first integrated effort by the central and state governments to provide social health protection to the informal sector," says Nair. "That is a big step forward."

However, sustainability is a key question. "The National Health Insurance Scheme will remain as a transitory measure unless its long-term sustainability is assured and it is linked with universal coverage plans," says WHO's Durairaj. "At present, the impact of the scheme on social health protection and its links with universal coverage plans are unclear as it is still evolving. At the same time, we cannot doubt its potential impact."