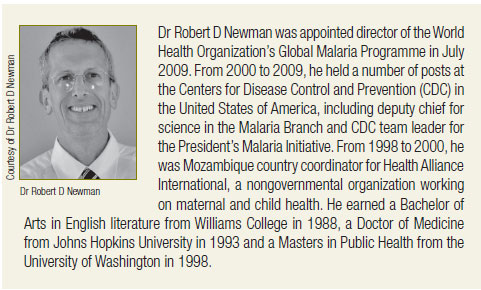 Dr Robert D Newman tells the WHO Bulletin why malaria programmes don't make headlines, why rapid diagnostic tests are the hottest new technology and why eradication is the only acceptable end-goal in beating this ancient scourge.

Q: The WHO malaria eradication campaign of the 1950s and 1960s failed, so why did the Gates Foundation resurrect that goal 30 years later and why did WHO endorse it?

A: I wouldn't want to speak for the Gates Foundation, but I do believe that eradicating malaria is the only morally acceptable end-goal, one that will take 40 years or more to achieve. Today, it's possible to reduce malaria in the places where it's worst and to eliminate it from the fringes where it is already low. But it's not possible to take the centre of Africa and reduce malaria to zero with today's tools.

Q: There is a long history of efforts to control malaria, from the League of Nations' Malaria Commission of the 1920s to the abandoned eradication campaign of the 1950s and 1960s. What is different today?

A: First, the tool kit is broader. People know that it's not going to happen with a single wonder drug or insecticide, but a complicated mix of insecticide-treated nets, indoor residual spraying, better diagnostic testing, better antimalarials and new tools on the horizon. Also, we have realized that no one organization can do this alone. It needs to be a global partnership, as with Roll Back Malaria. The WHO Global Malaria Programme plays a key role in that partnership by setting evidence-based policies, independently tracking progress, designing approaches for capacity building and health systems strengthening, and identifying threats to success and new opportunities for action. But you also need bilateral programmes, nongovernmental organizations and academic institutions. At the centre of everything you have national malaria control programmes, which are much more sophisticated than 20 years ago. So you have a different landscape today.

Q: What is the difference between elimination and eradication?

A: In the past, the term "eradication" was applied at the country level, so you'll hear about countries having "eradicated" malaria. Today, we use the term eradication to refer to the permanent reduction to zero of the worldwide incidence of malaria, and "elimination" as interrupting local mosquito-borne malaria transmission in a defined geographical area, usually a country.

Q: In March 2010 WHO changed its policy and now recommends diagnostic testing for malaria in all suspected cases before initiating treatment. Given the limited availability of quality microscopy, especially in Africa, how will countries achieve this?

A: Over the past few years a constellation of changes has compelled our technical expert group to recommend we move to universal access to diagnostic testing for malaria. Microscopy remains a reliable diagnostic tool but is seldom available. In the past 10 years, we have seen an increase in the availability of rapid diagnostic tests for malaria. Their cost has come down and their accuracy is reported through a product testing programme. In recent years, malaria transmission has dropped, so that in many places we are also saving money, as a typical rapid diagnostic test costs about US$ 0.50 while the average course of an artemisinin-based combination therapy (ACT) costs just under US$ 1. About a decade ago in Africa fewer than 5% of suspected cases in the public sector were given a diagnostic test, whereas in 2009 diagnostic testing was performed on 35% of such cases.

Q: Have any countries introduced such tests yet?

A: Many countries are using rapid diagnostic tests. For example, Senegal began to roll them out in 2007 to its health facilities, scaled up to every health facility within 18 months and saved a quarter of a million courses of ACTs every year. Until now, health-care workers have had to guess, treating all fever cases with antimalarials. Now fevers are no longer being treated presumptively, and Senegal knows from every single district exactly how many malaria cases it has every month. I don't see how we can defeat malaria unless we know where we've been successful or not, and where we're seeing resurgences.

Q: Is there any progress in terms of a vaccine?

A: There is a vaccine called "RTS,S" that is now in a very large phase III trial in 11 sites in seven African countries and will have enrolled approximately 16 000 infants and young children by the trial's end. We have never had a malaria vaccine get that far. The phase II studies in the target age groups in Africa have shown anywhere from 40-60% protection against malaria in the follow-up period for the trials. It's very exciting progress, but the efficacy to date is not that of, say, a measles vaccine, which is expected to be at least 90%. If licensed, it would be the first vaccine for a parasitic disease. The WHO Global Malaria Programme and the Department of Immunization, Vaccines and Biologicals have convened a joint technical expert group that regularly reviews progress on the RTS,S trial, scheduled to finish in 2014. So by 2015 the group will have enough evidence to advise WHO as to whether it should recommend this vaccine for public health use.

Q: Over three months, WHO will have released as many reports on malaria, what's going on?

A: The World malaria report, the most recent of which was released in December 2010, is the most important annual product to come out of the department, as it is a comprehensive look at the status of malaria control in a given year. In November we released the Global report on antimalarial drug efficacy and drug resistance: 2000-2010 - a review of 10 years of data comprising more than 1100 efficacy studies and 80 000 individual patients. It's important information because we cannot sustain our gains unless we have efficacious antimalarials. We know from history that every time we think we have outsmarted malaria we learn the humbling lesson that we are dealing with a very wily parasite. Resistance is not some abstract concept. Studies in Africa suggest that the huge increase in child mortality in the 1980s can be laid at the doorstep of chloroquine resistance, and that by losing an efficacious drug we open the door to terrible tragedy. We don't want that to happen again. The report documents in detail the emergence of artemisinin resistance in the Mekong region and initial responses. It is the basis for our global response plan, the Global plan for artemisinin resistance containment, which we developed with 100 different stakeholders from the Roll Back Malaria partnership over the last year and which we will release this month.

Q: Your report alerts us to resistance to artemisinins particularly on the Thai-Cambodian border, but also spreading to other parts of the Mekong region. Does that mean that ACTs - the most effective antimalarials to date - will soon be rendered useless?

A: While we have seen the emergence of resistance to artemisinins, we have not seen resistance to ACTs. That's a very important distinction. When administered as part of an ACT regimen, the partner drug "covers for" the artemisinin by killing the parasites that were not killed by the artemisinin. We have seen problems only in cases where the partner drug was previously used on its own and is no longer effective due to resistance. Right now we have five ACT regimens that are recommended by WHO for treating falciparum malaria. We don't have ACT resistance per se, so the good news is that the combination, if chosen well, is still working.

Q: The MDG to reduce malaria is a major goal, but how will we know whether we attain it as there is no reliable baseline from 1990?

A: You point to a huge challenge in public health: that routine data systems are not as strong as they need to be. There are ways around the lack of empirical data on malaria; there are ways to model and impute data that are missing. There are also sufficiently reliable ways to measure global progress. This is another reason why malaria diagnostics are so important, as confirming cases is essential for accurate and timely malaria surveillance. It's incumbent upon all of us working in public health to improve surveillance systems and vital registration systems so that we do have these data. Not just so that the world can measure its success, or so that donors can ask if the dollars were well spent, but most importantly so that countries can measure their own progress and appropriately manage their programmes.

Q: Why is there more drug resistance in south-eastern Asia than in Africa and Latin America?

A: Why is the Mekong area known as "the cradle of drug resistance"? Often resistance arises where the drugs were used first and the longest. The Mekong also has a very large private sector and a lot of the market for these drugs is unregulated. In the case of ACTs, artemisinins were marketed alone, and so people might buy a seven-day course but only take the drug for two days, or they may have gone to a shop that sold them a couple of doses. I ascribe most of the problem to early adoption and inappropriate use.

Q: Will resistance to artemisinins spread to Africa?

A: If history is any guide, yes. The global plan I mentioned looks at these scenarios and classifies countries. A tier-one country has confirmed resistance; a tier-two country is one that neighbours or has a significant migrant flow from a tier-one country. Tier three includes everywhere else, including Africa. We are asking tier-three countries to test four to six sites for efficacy and resistance to medicines that are in use there. If every country follows this recommendation, we can respond quickly and mobilize all the resources needed to face the emergency should resistance to artemisinins emerge.

Q: What is WHO's role in malaria control?

A: Malaria control is a complex endeavour in which WHO plays a vital role in representing the Member States' interests. As a department, we have distilled our key roles into four parts: setting evidence-based norms, policies and guidelines for countries to use; keeping an independent score of global progress; designing approaches for capacity-building, surveillance and health systems strengthening; and identifying threats and opportunities. Drug resistance is a major threat, a future malaria vaccine is a potential opportunity. The daily work of rolling out malaria control programmes is invisible. It's not front page news. For the first time not a single case of falciparum malaria was reported in the European Region in 2009. Morocco and Turkmenistan were declared malaria-free in 2010. And yet these things go relatively unnoticed. What will really move malaria control forward between now and 2015 is going to be the work by the unsung heroes at the community level and in district health facilities. That's where the battle will be won or lost, and WHO's role is to support that work.