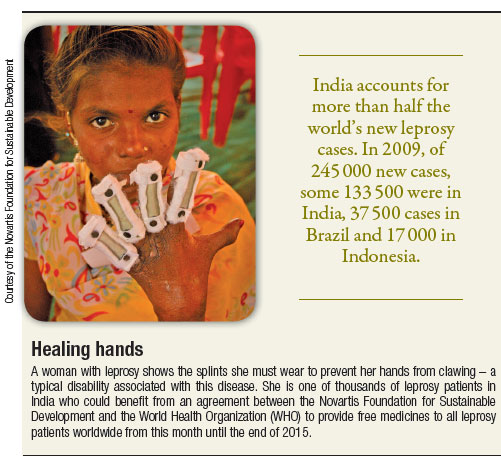 One year after an earthquake devastated the country, Haiti is considered to have the world's second highest needs for humanitarian funding. For the seventh consecutive year, the Sudan tops the list for crisis fund requirements and the Democratic Republic of the Congo is in third place. This year the United Nations Consolidated Appeals Process, which coordinates aid for responding to the world's crises, is asking donors for a total of US$ 7.4 billion in humanitarian funding to provide assistance to 50 million people in 28 countries. The 2011 Consolidated Appeals Process involves input from a record 425 aid organizations.

The first ever meningococcal A conjugate vaccine was rolled out across the whole of Burkina Faso last month. If introduced in all of the 25 countries that make up the so-called meningitis belt, it has the potential to eliminate the primary cause of epidemic meningitis in Africa. The new vaccine was designed to protect against group A meningococcus, which accounts for 80-85% of meningitis cases in those countries.

It was developed by the Meningitis Vaccine Project, a partnership between WHO and the international non-profit organization PATH, working closely with public health officials in countries of the meningitis belt, and research institutions across the world. It was manufactured by an Indian company, which agreed to sell the vaccine at a price affordable to African countries, less than US$ 0.50 per dose.

UN women up and running

The new United Nations agency on women's empowerment, UN Women, was officially up and running on 1 January at its New York headquarters. Headed by former Chilean president Michelle Bachelet, UN Women will be the lead UN agency dedicated to promoting women's rights and gender equality. It merges and will build on the work of: the UN Development Fund for Women (UNIFEM), the Division for the Advancement of Women (DAW), the Office of the Special Adviser on Gender Issues (OSAGI) and the UN International Research and Training Institute for the Advancement of Women (UN-INSTRAW). UN Women's projected annual budget of US$ 500 million is more than double the current combined resources of the four merged agencies.

The number of people newly infected with HIV is declining and AIDS-related deaths are decreasing, according to a report from the Joint United Nations Programme on HIV/AIDS (UNAIDS). The rate of new HIV infections has either stabilized or declined significantly in at least 56 countries. Data from the 2010 UNAIDS report on the global AIDS epidemic show an estimated 2.6 million new infection cases in 2009, nearly 20% fewer than 10 years earlier. In 2009, 1.8 million people died from AIDS-related illnesses, nearly one-fifth fewer than the 2.1 million who died in 2004.

WHO is calling for a new rapid diagnostic test for tuberculosis to be rolled out as part of national plans for tuberculosis and multidrug-resistant tuberculosis (MDR-TB) care and control. The test is a fully automated nucleic acid amplification test or NAAT that can be done on the bench and is ground-breaking in that it provides an accurate diagnosis of both TB and rifampicin resistance in about 100 minutes, compared to current tests that can take up to three months to produce results. Its endorsement by WHO last month follows 18 months of rigorous assessment in the early diagnosis of tuberculosis, as well as MDR-TB and tuberculosis complicated by HIV infection, which are more difficult to diagnose.

Last month, WHO issued another set of new tuberculosis guidelines recommending that all HIV-infected adults and children should receive isoniazid preventive therapy for 6 to 36 months, or as a life-long treatment in settings with high HIV and tuberculosis prevalence. Of the nearly two million AIDS-related deaths each year, one quarter of them are associated with tuberculosis. 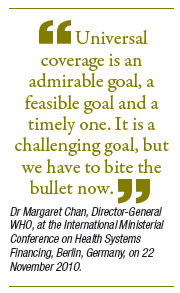 The Global Polio Eradication Initiative provides economic benefits of at least US$ 40-50 billion, according to a study published in the journal Vaccine. The study by Duintjer Tebbens et al. estimates that the initiative will have prevented more than 8 million cases of paralytic polio during the period 1988 to 2035. This translates into real savings from reduced treatment costs and gains in productivity, providing a strong economic justification for polio eradication.

Canada and the United States of America are slow to introduce electronic medical records compared with other developed countries, according to a survey of more than 10 000 primary-care doctors. The survey done by the Commonwealth Fund found that almost all primary-care doctors had access to electronic medical records in the Netherlands (99%), New Zealand (97%), Norway (97%), the United Kingdom of Great Britain and Northern Ireland (96%), Australia (95%) and Sweden (94%). Countries that still have some way to go include France (68%), the United States of America (46%) and Canada (37%). Read the report in the British Medical Journal, available at: http://www.bmj.com/content/341/bmj.c6198.full

A free online tool that teaches children about healthy eating has won first prize in the United States' First Lady Michelle Obama's competition called Apps for Healthy Kids. ZisBoomBah's free online tool "Pick Chow!" competed against nearly 100 American technology developers to design games and software applications to encourage healthy eating and physical activity. The game allows children to create healthy meals by dragging and dropping foods onto their virtual plate. Children then send their choices to their parents by e-mail and the tool creates a menu, recipes and a shopping list. For more information on the competition, see: http://www.AppsforHealthyKids.com

What would you prefer: incontinence or impotence? Dementia or death? The Global Burden of Diseases, Injuries and Risk Factors Study is calling on the general public around the world to participate in a survey to help improve the measurement of the impact of different diseases and injuries. This survey responds to the longstanding criticism about opaque methods for weighting health and disability preferences in the global burden of disease. The survey asks respondents to imagine different health outcomes and compare them to each other. For example: "Imagine two people - the first person is completely blind and the second person suffers from constant intense back pain. Who is healthier overall?" Available from: http://gbdsurvey.org/

12 January: Launch of Global Plan for Artemisinin Resistance Containment. Through this plan, WHO and partners urge countries to contain or eliminate resistance to artemisinins, to preserve the efficacy of artemisinin-based combination therapies (ACTs). It comes two months after the release of the Global report on antimalarial drug efficacy and drug resistance: 2000-2010. Available from: http://www.who.int/malaria/diagnosis_treatment/resistance

17-25 January: WHO's Executive Board meeting in Geneva. The Board is made up of 34 health experts, each one designated by a Member State elected for a three-year term by the World Health Assembly. Issues up for discussion include: the eradication of guinea-worm disease, the global immunization strategy and the sharing of influenza viruses among countries.

25-29 January: Prince Mahidol Award Conference/Second Global Forum on Human Resources for Health, Bangkok, Thailand. The theme is "Reviewing progress, renewing commitments to health workers towards MDGs and beyond." For the first time, awards will be presented to commend and recognize individual health workers for their exceptional contributions to health. For more information, see: http://www.who.int/workforcealliance/forum/2011

4 February: World Cancer Day. The Union for International Cancer Control is calling on the international community to take immediate steps to reduce the global cancer burden by committing to the World Cancer Declaration. Sign the declaration at: http://www.uicc.org/declaration/sign-world-cancer-declaration

8-11 February: Launch of the Global Status Report on Alcohol and Health in Geneva during the first-ever meeting of national counterparts to the Global Strategy to Reduce the Harmful Use of Alcohol.