Bangladesh is one of a number of countries trying to prevent acid violence through legislation while providing specialized care for victims, but attitudes to women need to change for there to be further progress. Patralekha Chatterjee reports.

It happened twelve years ago, but Asma Akhtar still remembers the assault vividly. A spurned suitor in his late 20s sneaked into her family's mud shack in the village of Jhalakhandi in southern Bangladesh and poured acid over her face while she was sleeping. She was 14 years old. "[The acid] trickled down from my forehead, dribbled into one eye and stung my right cheek. I screamed," Akhtar recalls. It was her mother who bravely grabbed the man before he could escape. "Unfortunately," says Akhtar, "the damage had already been done." Because there was no doctor in the village, Akhtar had to travel by road and then by boat to the nearest health centre, a four-hour journey, and when she got there no one knew how to treat the injuries. In the end a family friend put her in touch with the Acid Survivors Foundation (ASF), a nongovernmental organization (NGO) that had just been set up in the capital, Dhaka.

"Acid is used because men don't want to kill, they want to disfigure," says Monira Rahman, ASF's executive director, who explains that while acid violence is sometimes perpetrated by spurned lovers, it can also be used to attain other objectives. Acid burns can melt the skin away down to the bone so they often require expensive medical treatment. Legal redress is time-consuming and thus also expensive, so acid violence is often used to ruin families. Nor are the victims always women. "Studies of chemical burns caused by assault over the past 40 years reveal that while in some settings most victims are women, overall men are at greatest risk," says Dr Alexander Butchart, coordinator of the prevention of violence unit at the World Health Organization (WHO), citing Jamaica as one country where women are reported to have resorted to acid violence against men more often than men against women. 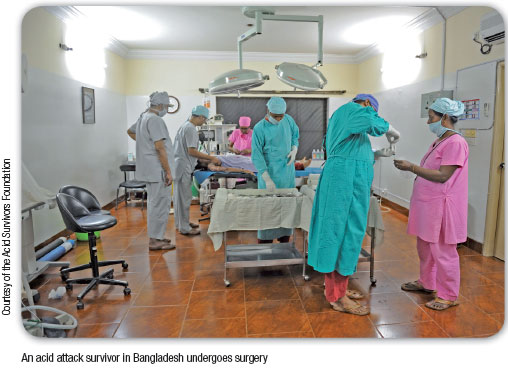 However, the studies are limited in that they cite only cases that have actually been reported. Campaigners say this is just the tip of the iceberg and that the true extent is much greater because women are often too afraid to report acid violence while many more live in fear of acid attacks. In Bangladesh and most other countries in Asia and in Africa where acid violence occurs, campaigners say the violence is typically male on female.

For Butchart this is an important consideration since addressing the problem effectively requires defining who is at greatest risk of perpetrating and becoming a victim of such violence. Butchart says that, with its partners, WHO is developing a manual on best practices for the prevention of burns and care provision for survivors, including a section on burns due to acid violence.

There are no global estimates of the number of victims of acid attacks each year. Apart from Bangladesh, acid violence has been reported in Afghanistan, Cambodia, China, India, Jamaica, Nepal, Nigeria, Pakistan, South Africa and Uganda. There have also been a few isolated cases in Europe and North America. In a highly publicized case in the United Kingdom of Great Britain and Northern Ireland, the model and television presenter Katie Piper spent more than a year undergoing surgery and physiotherapy to rebuild her face following an acid attack in 2008.

Before 1999, few countries were even talking about the subject, but since then, supported by United Kingdom-based NGO Acid Survivors Trust International (ASTI), ASFs have been established in several countries, including Cambodia, Pakistan and Uganda (ASFs are also planned in India and Nepal), and acid violence is increasingly on the policy agenda. "It is only in countries where there is an Acid Survivors Foundation mobilizing public support and working with the government that action is taken," says John Morrison, ASTI's chairman and founder. Morrison points out that apart from offering support for victims, ASFs raise awareness and spur the review or creation of much-needed legislation.

The Government of Bangladesh was one of the first to do this with the enactment, in 2002, of the Acid Control Act. Under the Act, the unlicensed production, import, transport, storage, sale and use of acid became punishable with a prison sentence of three to 10 years and the same applies to the possession of chemicals and equipment for the unlicensed production of acid. Bangladesh has also adopted measures to expedite the judicial process with the establishment of dedicated tribunals. The Government of Pakistan is also about to pass new laws, while the Government of Uganda is reviewing laws relating to acid violence with a view to strengthening them. In Cambodia a government committee tasked with drafting new legislation to curb acid violence was formed in February 2010, after a spate of attacks that began in late 2009. Legislation is likely to regulate acid sales and can impose harsher sentences on attackers including life imprisonment, according to drafting committee deputy chairman Ouk Kimlek. 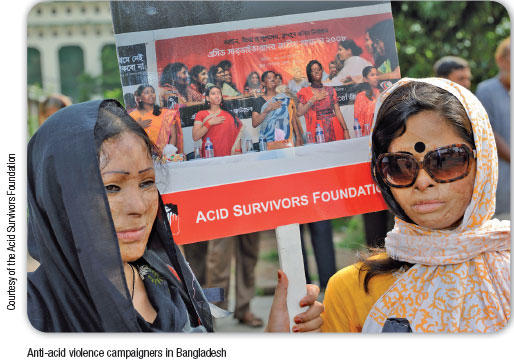 Even though acid violence is getting more attention in Bangladesh, much more needs to be done to prevent attacks in the future and to address the needs of victims. For one thing, conviction rates for such assaults remain very low - ranging between 10-20%, according to Rahman. For another, Bangladesh still struggles to meet the needs of victims on the clinical front. Fourteen of the 15 qualified plastic surgeons in the country work at the 50-bed burns unit in Dhaka, leaving just one located at a burns unit in Chittagong, in the south-east of the country. One of the biggest challenges in treating acid burn patients is to act without delay, so the lack of facilities outside Dhaka is a huge problem. For Dr Samanta Sen, project director of the burns unit affiliated to Dhaka Medical College Hospital, one solution would be to train more doctors and paramedics. "There is a need to have an independent burns and plastic surgery institute," Sen says. Meanwhile, the government has initiated steps to open a burns unit in the country's 13 medical college-cum-hospitals.

Ideally, attacks should not happen in the first place, and the government is working to make this a reality by developing links with local and national media to focus attention on the problem. One of the main targets of the government's awareness-raising campaign is Bangladeshi males, a focus ASTI's Morrison applauds, noting that the national cricket team has publicly condemned acid violence. Community outreach of the kind being undertaken by the Bangladesh Acid Survivors Foundation (BASF), which has developed close links with other grassroots NGOs such as Nariphokko and the Bangladesh Rural Advancement Committee (BRAC), can also play a role in prevention.

For the time being there are reasons to be cautiously optimistic about the future in Bangladesh, where, according to Morrison and Rahman, despite the low conviction rate of perpetrators and the inadequate provision of specialized health care, acid attacks have come down from an estimated 500 in 2002 to fewer than 100 in 2010. The ASF in Dhaka must take a lot of credit for that and, of course, for picking up the pieces of Asma Akhtar's shattered life 12 years ago. Akhtar underwent plastic surgery in the Dhaka Medical College and was also sent abroad for treatment. "My eye was already damaged when I arrived in Dhaka so nothing much could be done about that," she says, but since that terrible night she has been able to put her life back together, working as a peer counsellor for the foundation, marrying and becoming the proud mother of a three-year-old girl.