Are antibiotics still "automatic" in France?

The first part of a series of three features on antimicrobial resistance looks at the French campaign that has been held up as an example of how to change the way antibiotics are prescribed. But, as Gary Humphreys reports, 10 years after the campaign's launch France is still one of Europe's biggest consumers of antibiotics and trends are moving in the wrong direction.

Dr Pierre Fayn recalls the effect a 2002 French National Health Insurance campaign promoting better-targeted antibiotic use had on the children of Cléon d'Andran, a sleepy village in the Drôme in south-eastern France. "I would start by explaining to the parent why there was no need to treat the little one's cold with an antibiotic, and the child would chant: "Because 'antibiotics are not automatic'. They knew the catchphrase," he says with a grin.

The catchphrase - Les antibiotiques, c'est pas automatique - was in fact the title of the campaign first launched in 2002 with the aim of decreasing antibiotic prescription in France by 25% over a period of five years. In particular, the campaign targeted the treatment of viral respiratory infections in children, for whom 40% of the prescriptions were being written. Since 2002 the campaign has been repeated every winter for the duration of the viral respiratory infections epidemic season. The campaign was part of a broader government initiative rolled out in 2001 and called Keep Antibiotics Working - a multi-pronged plan that included the promotion of streptococcal rapid antigen testing and treatment guidelines among health-care professionals and the targeting of primary care physicians in one-on-one tutorials.

At the time of the 2002 launch, France was consuming more antibiotics than any other country in Europe and facing a burgeoning antimicrobial resistance problem, notably with multidrug-resistant Streptococcus pneumoniae, a bacterium that colonizes the nose and throat and can cause problems that range from mild ear infections to life-threatening pneumonia and is especially dangerous for young children and elderly people. It has been known ever since antibiotics were developed that using them improperly leads to bacterial resistance, and overuse of antibiotics only increases that risk. The threat of widespread antimicrobial resistance raises the spectre of a world without effective antibiotics, where a patient can die from an infection once regarded as banal and easily treatable. The World Health Organization is devoting the next World Health Day on 7 April 2011 to raising awareness around the issue. 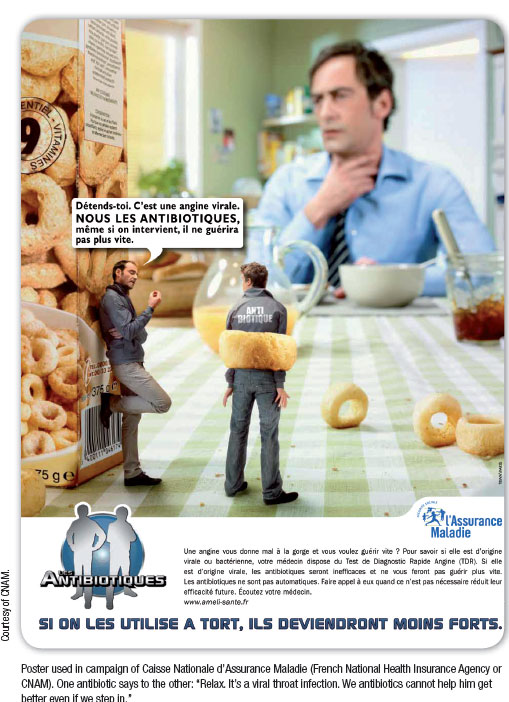 France is one of 22 high-income countries whose measures to reduce antibiotic usage between 1990 and 2007 are assessed in a study by Dr Benedikt Huttner and colleagues that was published in The Lancet in January 2010. They found that campaigns that were formally assessed, like the French one, seemed to reduce the use of antibiotics in outpatients "at least in high-prescribing countries".

According to a study published in PLoS Medicine in June 2009, the French campaign exceeded expectations with a 26.5% reduction in the number of antibiotic prescriptions over the first five years. Though by no means the first to achieve significant results - yearly mass media campaigns in Belgium have been credited with a 36% reduction in antibiotic prescriptions between 1999 and 2000 and 2006 and 2007, for example - the French campaign is often held up as a model.

For Professor Benoit Schlemmer, president of the government-appointed Keep Antibiotics Working committee, while the achievements of the French campaign are undeniable, nine years after its launch there are still major concerns about the way the French prescribe and consume antibiotics. For one thing France remains close to the top of Europe's antibiotic consumer league table, trailing super-prescribers Greece and Cyprus, although Schlemmer says league tables are of little interest to him. "The important thing is we prescribe 50% more antibiotics than the average for Europe. Half of the prescriptions [for antibiotics] written in France are pointless." And the situation is not improving. In fact there was a 4% increase in prescriptions for adults between 2008 and 2009, Schlemmer says, adding that the increase was even steeper winter to winter, where the jump was more like 10%.

So what is going wrong? One explanation may lie in the way French doctors get paid. Fayn's income is dependent on the number of clients he sees so, like all French general practitioners, he has a financial stake in attracting patients and in keeping his consultations as short as possible. "Time is money and the truth is it's quicker to prescribe an antibiotic than to spend half an hour explaining to the clients why they don't really need one," says Schlemmer.

Meanwhile, telling patients to go away and come back again if the symptoms get worse is not easy either. "People would rather not have to come back," Fayn admits. Some doctors are ready to take a stand. "I say [to my patients] 'if you have already diagnosed the illness and prescribed the cure then you do not need me'," says Dr Alban Pinay, another general practitioner based just outside the village of La Begude de Mazenc, a few kilometres from Cléon d'Andran. "I give them my prescription pad and say 'go ahead, you fill it out'." Pinay claims that the campaign has increased public awareness of the resistance issue and made it easier to win the argument, but acknowledges that some patients don't like to be turned down and, if they are, will simply go to find another doctor who will give them what they want.

Clearly this is not a uniquely French problem. "It's human nature," says Professor John Conly at the Centre for Antimicrobial Resistance of the University of Calgary, Canada, and former Chairman of the Board for the Canadian Committee on Antibiotic Resistance. "Doctors yield to pressure from patients for a number of reasons, one being - depending on the health-care system - that they are afraid they will lose their patients."

The consensus among the doctors and patients interviewed for this article was that doctors typically end up adopting a kind of compromise where they prescribe the antimicrobial demanded and then tell the patient to wait before taking it to see if the condition improves on its own. Laurent Depraz, a 40-year-old father of two young children prone to ear infections and coughs, says that his Paris-based paediatrician usually gives an oral swab test before prescribing. "But even if the illness does not appear to require antibiotics at the time, the pediatrician will still write a second prescription for antibiotics to be used three days later if the symptoms have not disappeared," he says. "There is an attitude problem here," says Schlemmer. "A kind of intellectual laziness that says 'this may not do the patient any good, but it certainly won't hurt him'."

But it will hurt him, in the long run, as the overuse of antibiotics leads to the development of resistant bacteria, so sooner or later the same patient could be exposed to a bacterium against which the treatment simply will not work. Changing the way doctors get paid could be one solution to France's problem. But according to Schlemmer this is a very sensitive issue that French doctors are reluctant to discuss. "We have talked to the ministry of health about the possibility of incentivizing doctors to prescribe less, but so far no decision has been taken," he says, adding: "Personally I am not sure it will change much. This is a cultural issue and it's going to take 10 or perhaps 20 years to change attitudes, but we are heading for a catastrophe if we don't succeed."