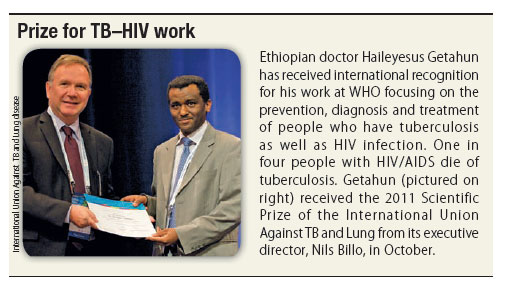 Representatives from about 100 governments gathered at the World Conference on Social Determinants of Health in Rio de Janeiro, Brazil, in October pledged to improve social, economic and environmental conditions to reduce health inequities within and between countries. Convened by WHO and hosted by the Government of Brazil, the conference brought together health ministers as well as health experts and civil society organizations. Read the Rio Political Declaration on Social Determinants of Health here: http://www.who.int/sdhconference/declaration/rio_political_declaration.pdf

Argentines consume an average of 12 g of salt per day, more than double the internationally recommended daily limit of less than 5 g. Argentina and other countries in the WHO Region of the Americas are working closely with food manufacturers to reduce salt content in products such as bread, soups, instant noodles, baby food and snack foods. Researchers in Canada have estimated that reducing sodium intake by 10% each year in 18 Latin American countries could prevent almost 600 000 heart attacks and strokes and save some 54 000 lives. "Most people are unaware of where most of the salt they consume comes from and how damaging it can be to their health," says James Hospedales, senior adviser on prevention and control of chronic diseases at the WHO Regional Office for the Americas. "Population-wide policies and action are key if we are going to make the healthy choice the easy choice for people to make."

Pharmaceutical companies have agreed to share their intellectual property with non-profit disease research organizations to speed the development of drugs, vaccines and diagnostics on neglected tropical diseases, malaria and tuberculosis. In October, the World Intellectual Property Organization launched WIPO Re:Search, a new searchable, public database of intellectual property assets, information and resources contributed by pharmaceutical companies and researchers. Qualified researchers anywhere in the world will be able to access this royalty-free information to further research and development on neglected tropical diseases.

Promising results from phase III trials of a malaria vaccine for children were announced at the Malaria Forum hosted by the Bill & Melinda Gates Foundation in October in Seattle, United States of America (USA). Between May 2009 and January 2011, more than 15 000 children from seven African countries took part in trials that showed that the malaria candidate vaccine called RTS,S prevented clinical malaria in 56% of children enrolled. "The preliminary outcome of these ongoing clinical trials marks a significant milestone in research efforts to control malaria worldwide and in Africa in particular. We look forward to the end product and expect it to be cost-effective," says Luis Sambo, WHO Regional Director for Africa. In sub-Saharan Africa, a child dies of malaria every 45 seconds. 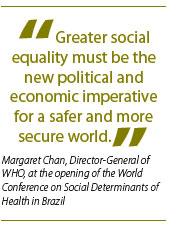 Brazilian soccer star "Ronaldinho" has joined an international campaign to make young people more aware of HIV/AIDS. Already a United Nations Goodwill Ambassador, the footballer has accepted an invitation to work with the Joint United Nations Programme on HIV/AIDS (UNAIDS) and the Brazilian Ministry of Health to promote AIDS awareness. Only about one-third of young peopl e worldwide have accurate and comprehensive knowledge of how to protect themselves against HIV. This year's World AIDS Day on 1 December marks 30 years since the first reported case of HIV infection. Since 1981, more than 65 million people have become infected with the virus and nearly 30 million have died of HIV-related causes.

Since 1992, following a recommendation by the American Academy of Paediatrics, parents in the USA have been putting babies to sleep on their backs to decrease the risk of sudden infant death syndrome (SIDS). As a result, the number of SIDS cases there have fallen by more than 50% but infant deaths from other sleep-related causes, including suffocation, asphyxia and entrapment, have increased. The American Academy of Paediatrics has expanded its recommendations to reduce these deaths as well. The recommendations include the use of a firm sleep surface, breastfeeding, room-sharing without bed-sharing, routine immunization, use of a pacifier and avoidance of soft bedding and overheating. Access the technical report from the Task Force on SIDS in: www.pediatrics.org/cgi/content/full/128/5/e1341

High-tech, commercial blood tests for tuberculosis (TB) - called interferon-gamma release assays (IGRAs) - should not be used in low- and middle-income countries, according to new recommendations published by WHO in October. IGRAs are designed to test for latent TB infection - i.e. exposure to TB bacilli. These indirect tests cannot accurately predict the risk of infected individuals developing active disease. According to the expert committee, IGRAs should not be used in low-resource settings, particularly in countries that have a high TB and/or HIV burden. Where indirect tests are used, WHO does not recommend using IGRAs in place of less expensive, simpler tuberculin skin tests. These guidelines do not apply to high-income countries, where IGRAs can be used in conjunction with radiography and other diagnostic technology.

Every day around 3000 young people aged 1524 years are infected with HIV. For the first time, the United Nations is calling on young people to help develop fresh ideas for tackling HIV infection. CrowdOutAIDS.org is an online collaborative project that uses social media to involve young people from around the world in developing an HIV strategy. "It is absolutely critical that we engage young people - not as recipients of our messages but as the actors and creators of change," says Michel Sidibé, executive director of UNAIDS. The project will continue until mid-January 2012. To find out more, visit www.crowdoutaids.org.

Nordic countries in the lead

Iceland, Norway, Finland and Sweden continue to rank as the top four countries with the best gender equality, according to the fourth World Economic Forum's Global Gender Gap Report published in October. The Report's index assesses 134 countries on how well resources and opportunities are divided among male and female populations, regardless of the country's level of development. It examines gender inequality in four areas: (i) economic participation; (ii) educational attainment; (iii) health and survival; and (iv) political empowerment. Lesotho and South Africa rank 8th and 12th due to high levels of female participation in education and the workforce. In Asia, the Philippines sets a good example, ranking ninth overall due to strong performance in all areas assessed by the index. Access the report at: http://www.weforum.org/gendergap

Aggressive marketing of infant formula led to a decline in breastfeeding in the Philippines, according to a study published in November in Social Science and Medicine. A survey of 345 mothers with children aged less than two years found that those who recalled advertisements for infant formula were more likely to use the product. The women remembered messages, mostly in television advertisements, claiming that infant formula would make their babies healthier and more intelligent. Infants given formula are more than six times more likely to be weaned before 12 months. According to national statistics, only 16% of Filipino infants aged 45 months were breastfed exclusively, as recommended by WHO. Between 2003 and 2008, rates of formula feeding in the Philippines increased by 6%.