For Stephen and Linda Schneider, the game was up. The husband and wife, he a doctor and she a registered nurse, had been running a "pill mill" - an illegal prescription drug dispensary - in the state of Kansas. Last year they were convicted of fraud and other offences and sentenced to 30 and 33 years respectively in prison.

Their illegal dealings led to more than 100 drug overdoses requiring visits to emergency rooms and were linked to 68 deaths. A four-year investigation of the case that involved a dozen American law-enforcement and health-care organizations was awarded the 2010 prize for "investigation of the year" by the National Health Care Anti-Fraud Association in the United States of America (USA).

But for Lou Saccoccio, executive director of the association, when it comes to tackling health-care fraud head-on, tough sentencing is not enough. "The crime's been committed. The money's gone. We need to focus more on prevention."

Saccoccio estimates that, by the end of 2011, US$ 75 billion will have been lost to fraud in the USA, but he adds that there are signs of change. "Private insurers and public programmes are starting to focus more on prevention and the systemic aspects of it." 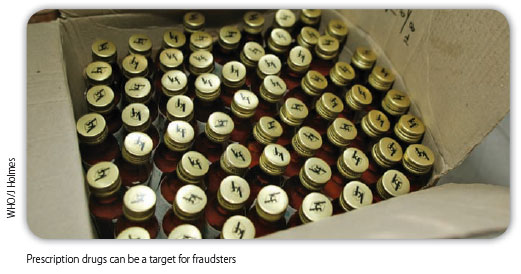 Unlike the Schneider case, most health-care fraud is what specialists such as Saccoccio term "high volume, low value". The forging of a doctor's signature on a prescription and the theft of basic medical equipment may seem trivial but, when added up, account for billions of dollars lost every year. Money that could be spent on patient care.

The World Health Organization's (WHO) latest estimate of annual global health care expenditure is US$ 5.7 trillion (2008). Each year, 7.29% of that, or an estimated US$ 415 billion, is lost to fraud (and error), according to figures released last month by the Centre for Counter Fraud Studies at the University of Portsmouth and accounting firm PKF in the United Kingdom of Great Britain and Northern Ireland. Jim Gee, director of Counter Fraud Services at PKF, calls health-care fraud "the last great unreduced health-care cost".

"The sooner we treat fraud as a cost like any other, to be measured and minimized, the quicker more money will be available for better patient care," says Gee, who headed the National Health Service's (NHS) Counter Fraud Service in the United Kingdom between 1998 and 2006. Since leaving the NHS, Gee has been working with health providers in different countries and has helped to produce the first worldwide estimates for health-care fraud.

"These new figures highlight the global scale of the problem," Gee says. "No country is exempt. It affects every kind of health-care system, be it public or private."

Health-care fraud is found in many forms: from the theft of a wheelchair to the organized crime rackets that steal patient information and set up shell companies to bill their insurers for "phantom services". In China, for example, some families use the health-care identity of the member with the best health coverage. In South Africa, people claim for services they have not received and in countries such as the USA, where providers bill insurers directly, health-care fraud may take the form of over-charging known in the business as "upcoding". 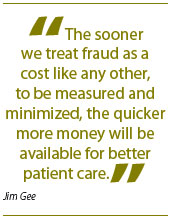 In South Africa, Simanga Msane, business development officer with Johannesburg-based fraud investigation firm Qhubeka Forensic Services, believes that the South African health-care system is defrauded to the tune of between 4 billion and 8 billion rand annually (US$ 0.51 billion). In the United Kingdom in 200809, around 3% of the NHS's expenditure was lost to fraud, according to research by the University of Portsmouth. This has been reduced from estimates of more than 5% fraud 10 years earlier.

In the USA, according to Saccoccio, some progress is being made in making health systems more resistant to fraud. The Centers for Medicare and Medicaid Services (CMS), the federal agency that administers the insurance programme for the elderly and the public health programme for people with low incomes, is beginning to use predictive modelling technologies to detect patterns of health-care fraud. This is done via a system developed in the private sector designed to catch fraudsters before the damage is done.

"The system uses algorithms and an analytical process to examine Medicare claims as they are made, assign risk scores and issue alerts to CMS before claims are paid," Saccoccio says, adding that CMS can use this information to identify potentially fraudulent claims and analyse them further. 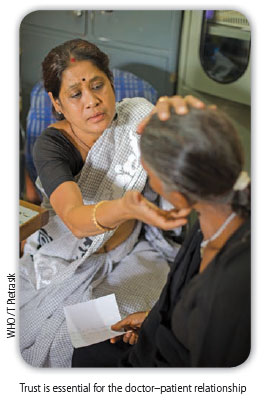 Payers of health care, including government programmes and commercial insurers, can protect themselves, Saccoccio says, by doing background checks on new providers, by suspending payments to providers where there is suspicion of fraud and by sharing anti-fraud information about new trends and schemes.

In China, the government "has tried a number of micro measures" to combat health fraud, according to Grayson Clarke, fund management expert at the European UnionChina Social Security Project. These include preventing doctors from receiving kick-backs from the recommendation and sale of pharmaceutical products by centralizing drug procurement at hospitals.

As in many countries, China doles out severe punishment to transgressors as a deterrent. "In terms of medical insurance, a number of provincial and municipal authorities have adopted a punishment system for hospitals, clinics and pharmacists found to have overcharged for services. This includes fines and, in theory, suspension from being an approved supplier for medical insurance services," Clarke says.

A recent major development expected to reduce fraud considerably is China's Social Insurance Law that came into force earlier this year. It brings many types of medical insurance under one roof and incorporates anti-fraud measures, according to Hu Jiye, a professor at the China University of Political Science and Law. Jiye is one of the experts who helped draft new legislation as part of China's drive to provide universal access to health services by 2020.

But while these recent administrative and legal measures should reduce health-care fraud, China's efforts are hampered by its inability to measure the problem. "It cannot assess whether it is reducing costs or winning the battle against fraud unless it has reliable, transparent and consistent medical and financial information," says Clarke.

"Countries that have gone furthest in tackling fraud have strong financial and medical accountability systems, i.e. proper accounting and reporting underpinned by solid audit regimes." Clarke says countries need to be able to benchmark the costs of the same treatment or drugs in different areas and explain why those differences occur.

Once proper financial accounting systems are in place, technology can play an important role. Paul Vincke, president of the European Healthcare Fraud and Corruption Network, tells of a computer programme used by health providers in Norway, which can stop fraudulent payments before they leave the system. An estimated 60% of the abuse in Norway's health-care system was detected as a result, Vincke says.

For Gee, many people working in health care are in denial about the problem of fraud in their sector. No organization as bound up with public trust as a health-care system wants to admit large-scale losses. "When I started my work with the NHS," Gee says, "finance directors of large hospitals with £200 million-a-year budgets would sometimes say to me, 'There is no fraud in my hospital'".

But those who work in the counter-fraud field argue that, until there is recognition of the extent of the problem, steps cannot be taken to remedy it.

A positive sign that countries are acknowledging the problem is the organization of the first-ever global conference on health-care fraud. The event, which took place on 15 November, was hosted by the Global Health Care Anti-Fraud Network in Atlanta, USA. It drew participants from countries including Canada, New Zealand, South Africa and several countries in Europe, including the United Kingdom.

According to Vincke, acknowledgement of fraud in France led to the establishment of a counter-fraud service based on best practice in Belgium, the Netherlands and the United Kingdom. Between 2006 and 2010, the service managed to recoup 250 million Euros (US$ 346 million). 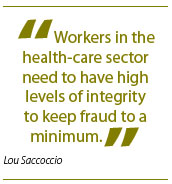 Anti-fraud experts agree that the motives of fraudsters are universal: a desire for more money and a belief that they will get away with it. The presiding judge in the Schneider case last year called the case "an avoidable tragedy motivated by greed".

"Health care as a sector really isn't different from any other sector; the essential human behaviours remain the same," Gee says. To successfully reduce the cost of fraud requires more than just reacting to individual incidents after losses have been incurred. "It requires work to strengthen anti-fraud cultures, to take measures to deter fraud and to remove systemic weaknesses that provide opportunities for fraudulent behaviour," Gee says.

Saccoccio agrees: "Workers in the health-care sector need to have high levels of integrity to keep fraud to a minimum." This, Gee says, is fundamental. "Research has shown over the years that you can never completely eradicate the dishonest minority but, by developing a strong anti-fraud culture and strong peer-group pressure, you can maximize the size of the honest majority."