Scientists embrace the "One World" approach

More than 20 horses in the Australian states of Queensland and New South Wales had died of the Hendra virus. Panic was growing and fear that the virus could spill over to the human population as it had in the past, killing four out of every seven people infected.

Queensland's premier invited a group of scientists to advise her cabinet in July on what to do. "I told them it was 'lucky' that the virus killed the horses quickly and that it is not easily transmissible," says Linfa Wang, who heads the emerging virus research team at the CSIRO Australian Animal Health Laboratory. "That way it couldn't spread fast and infect humans."

Over the past 15 years, its close cousin, the Nipah virus had killed hundreds of people in Bangladesh, India, Malaysia and Singapore. The Hendra and Nipah viruses cause severe illness in humans, characterized by inflammation of the brain or respiratory diseases. 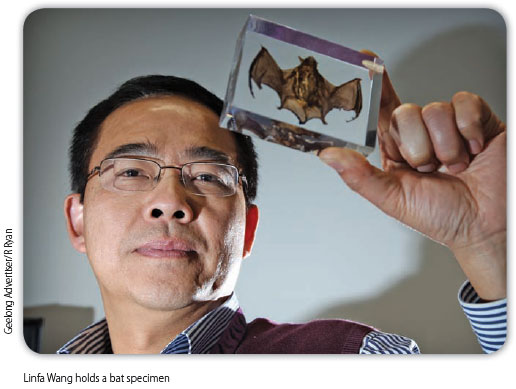 The state opposition leader had called for a cull of bats, the virus natural host. "Bomb the bats" screamed the headline of a newspaper quoting him.

"We explained that we shouldn't exterminate the whole bat population because we need them to maintain the ecological balance," Wang says, explaining that bats play an important role in seed dispersal, pollination and insect control. "This in turn helps to control other infectious diseases transmitted by insects." If bats are stressed due to lack of food or forced migration, the stress can increase the viral load in bats and trigger more disease outbreaks, he told the cabinet. 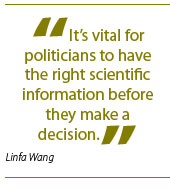 As a result, the state government stepped up public education about the disease and invested more in research.

Governments are increasingly seeking the advice of scientists, says Wang recalling a recent visit from a high-level delegation from China. "It's vital for politicians to have the right scientific information before they make a decision."

The spectre of an outbreak of an unknown virus for which there is no vaccine or cure has become the ultimate modern-day nightmare, not only for politicians. Recently released Hollywood film Contagion taps into popular fears of disease outbreaks and is based on a true story - Wang and his colleagues' discovery of the Hendra/Nipah viruses in the 1990s.

"Our lab is one of the largest bio-containment facilities in the world dealing with animal pathogens, some of which have the potential to infect and kill humans. About 50 of our staff went to see the film," Wang says. "We were very excited to see our work in the movie. What happens in the film is similar to what happened to us, for example, how we developed diagnostics and special bat cell lines to grow the virus."

Wang and his colleagues are part of a new global movement that brings together experts who once had little or nothing to do with each other, from basic science and disease surveillance to ecology and veterinary medicine.

"We are working hard to promote the idea of 'One Health'. There are still huge gaps in our knowledge, we need a better understanding of the wildlife hosts of pathogens, otherwise we will not be able to prevent future outbreaks," Wang says.

More than 30 new human infectious diseases have emerged over the past three decades, most of them originating in the animal world. The "One Health" movement is about preventing situations such as deforestation and certain agricultural practices that encourage their emergence, and it advocates for early detection.

A growing number of scientists at the so-called interface between humans and animals is dedicated to catching pathogens that are on the verge of mutating and jumping from animals to humans. Joseph Fair is the chief science officer of Global Viral Forecasting Inc., based in the United States of America (USA), one part of this global collaboration.

Fair says that politicians in his country have started to pay more attention to the threat of major epidemics since the end of the Cold War. "Back in the [Ronald] Reagan years, thinking about nuclear catastrophe was what kept people awake at night," Fair says, referring to the 1980s when this United States president was in office.

Fair's work focuses on so-called viral hot spots, the parts of the world where pathogens are likely to jump from animals to humans, such as the tropics of central Africa and south-east Asia. "These are places with high biodiversity and heavy interaction between humans and wild animals in terms of the hunting and consumption of bush meat," Fair says. "But the consumption is not so much the problem - it's the butchering. That's where the jump from animal to human occurs in most cases."

In 2009, the United States government launched the Emerging Pandemic Threats programme to "preempt or combat diseases that could cause future pandemics". It works in partnership with the World Health Organization (WHO), the United Nations Food and Agriculture Organization (FAO) and the World Organization for Animal Health (OIE) to help develop laboratory networks and strengthen diagnostic capacities in the places where new diseases occur. 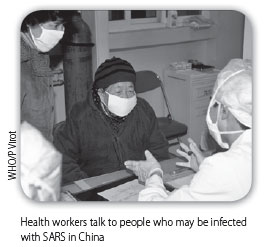 "I collected many field samples in the 1980s in Africa, but in those days we did not have sophisticated laboratories on hand to analyse them," says Pierre Formenty, who leads the Emerging and Dangerous Pathogens team at WHO. "If we'd had these systems 50 years ago, perhaps we could have detected HIV (the virus that causes AIDS) and averted the pandemic that has killed millions of people." HIV originated from a chimpanzee virus.

Wang and other animal health experts are working more closely with their human health counterparts than ever before. WHO has stepped up its collaboration with FAO and OIE along the lines of the "One Health" approach.

One of the best examples of how human and animal health converge is the story of severe acute respiratory syndrome (SARS). After the end of the outbreak in July 2003, WHO, FAO and the Chinese government asked scientists to find out where the disease had come from to improve prevention measures.

A few months later, virologist Yi Guan from the University of Hong Kong in Hong Kong, Special Administrative Region, China, investigated a renewed outbreak of SARS. He visited Guangdong, the Chinese province where SARS was first found, from October to December of that year to take samples at animal markets there. 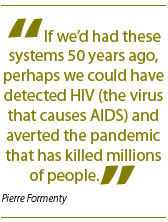 "There were many species in cages closely packed together," says Yi. "Stress caused by lack of space and the threat to their lives are factors that increase transmission between animals and to humans. These conditions were typical at these animal markets."

In this part of China, the economic boom that started in the mid-1980s led to more affluence and a greater demand for civet, a rare game meat delicacy. The number of civet cat farms increased from about 15 to 2000 between the start of the boom and the time of the SARS outbreak in 200203. 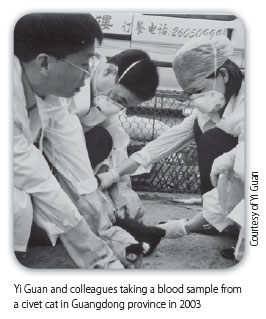 "We found that several kinds of animals were infected with a virus that was 99% similar to the SARS virus found in humans, confirming once again that a SARS-like virus at the live animal markets in Guangdong was the source of the infection in humans," says Yi. As a result, civet trading in these markets was banned in 2004. "It is this measure that broke the chain of transmission and the reason why SARS has not made a come back since."

But while scientific findings showed that civet cats transmitted SARS to humans, it was not until 2005 that the mystery about SARS' origins was solved.

"Given my background in Hendra and Nipah, I had a hunch that bats were perhaps the natural reservoir," says Wang. "But initially it was hard to persuade Chinese scientists to accept this."

Wang and his colleagues from institutions in China, Australia and the USA gathered samples; their findings published in the journal, Science Express, in 2005 suggested that bats were indeed the natural host for SARS. "The virus we found in bats was as close as we could get to the SARS virus isolated in humans, it was more than 90% similar genetically," Wang says.

"This is just one example, but it shows why wild life and public health people need to work together. SARS started in China but the bats may have come from all over the region," Wang says. "We found evidence of all types of transmission: animal to human, animal to animal, human to human and human to animal. There is no doubt that SARS will come back, but the impact will be much smaller since we are now much better prepared for early detection and prevention of any potential outbreaks."