Kjell Magne Bondevik was diagnosed with depression during his first term as prime minister. His honesty and willingness to speak openly about his illness led to an outpouring of support from across Norway. He talks to Ben Jones.

Q: When did you realize you were depressed?

A: One Sunday morning in August 1998, I couldn't get out of bed. The minister of foreign affairs, a close friend of mine, came. I told him I wanted to resign. I felt totally empty, without any value. Everything was black. He said I should not make such an important decision when I was in bad shape. Another friend came with a psychiatrist. Together they got me out of bed and, after talking to me, the doctor diagnosed me with "depression".

Q: Why did you decide to go public?

A: The next day we had to do a press release to announce my absence as prime minister, but were unsure how to explain this. After a few minutes, I said: 'Why don't we tell it as it is?' and that's what we did, for two reasons. First, to avoid speculation and, second, and even more importantly, I could contribute to more openness about mental health problems and help to combat the stigma attached to them. Today I'm even more convinced than I was then that it was the right thing to do.

Q: Do you know the cause of your depression. How long did it take to recover?

A: During over 30 years in politics, stress was common in my life, but this time it was different. When I became prime minister I took on too much and hardly had a break. At the same time I was going through a time of loss and grief as three of my best friends had all died of brain cancer in the space of three years. I didn't realize that grief, when it is not managed properly, depletes your strength. I was away from the office for three and half weeks, after what I call 'walking and talking therapy' in a cottage in the mountains. 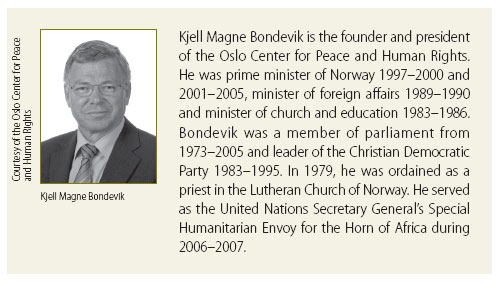 Q: What was the public response?

A: I received about 1000 letters from people across Norway, saying they had similar problems and that when I was open about my diagnosis, it became easier for them to be open as well. Some of them said that, for the first time, they could talk to somebody else about their illness. They were thinking: 'If the prime minister can talk about his mental health problems, why can't we do it too?' 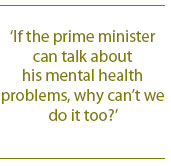 Q: What did you learn from your illness?

A: The need to dare to feel your weakness and to accept all the painful feelings. I believe that it is possible to show weakness when you are a leader. That way we become even stronger. As prime minister, it taught me how to set limits on what I should be involved in and what people could ask of me. I became a better leader and a better prime minister. As a human being, I learned a solid lesson in how delicately tuned human nature is. It is all about balance between our physical and mental situation. And I learned about the importance of taking care of the good moments in life, of the relationship with family and friends, and taking time to experience nature, music and art. I also think that a good physical condition through exercise improves mental health. But most of all I learned about the importance of openness about mental illness.

A: The health services in Norway are financed by government funds and, in general, have a great capacity to meet the needs of the people. Hospitalization, for both physical and psychological diseases, is also free of charge. Still, when the Norwegian parliament discussed a white paper on mental health and the health system in 1997, there was broad political agreement that mental health had been neglected and that this had to change.

A: The government presented an eight-year plan for mental health services to spend 24 billion Norwegian krone (US$ 4.3 billion) more on mental health care services, including on research into mental health. We wanted a warmer and more humane society, where people care for their fellow human beings, care for the less fortunate among us and take responsibility for each other and for future generations. The idea was to support people with mental health conditions so that they could become independent and organize their own lives. We established several principles for expanding mental health services including prevention, where possible, and that users should have a say in the services that are on offer. Also, treatment should be voluntary as far as possible, while service users should have plenty of contact and compani onship with other service users. The idea is to give the recipient of the services a new quality of life. Q: Now more than a decade later what is the result?

A: The mental health care system was not good enough, so there was strong pressure from nongovernmental organizations and health workers to improve and expand the mental health system. Since then, we have built 75 new mental health centres across Norway's 18 districts. Some big psychiatric hospitals have been closed down. In general, there has been a greater focus on public health. More and more people have come forward to tell their stories about their mental health problems, people from all walks of life, celebrities and ordinary people alike. Also, people working in the mental health system have taken an even more active position in the media. Since my announcement, we have also seen an increase in the number of people with mental health problems, but this is because they are being diagnosed and counted better than they were in the past.

Q: Are there arguments for locking away psychiatric patients, for example, those who have committed criminal acts, such as violent attacks?

A: These acts are a sign that mental health services are not fully equipped to deal with the challenges and that there is still a lack of capacity. Locking up patients is not the way to go, but in some extreme cases it may be necessary for the shortest time possible and with adequate legal safeguards.