WHO is revising its guidance for countries on how to prepare for a future influenza pandemic but, as Michael Dumiak reports, the challenges are great.

Three years after the H1N1 influenza pandemic, there is a reluctance to talk about it  even among health officials  as, despite widespread alarm, it was far less devastating than the 1918 Spanish flu. Pandemic fatigue has set in and is difficult to overcome in the current economic crisis.

"It's vital for the global health community to take in what happened during the 2009 outbreak and learn from it," says Dr Nahoko Shindo from the World Health Organization's (WHO) Global Influenza Programme.

She warns that if this is not done soon, countries will lose momentum and the memory of what happened will fade. "We need to fix the things that didn't work so that we can tackle similar threats better in future."

Top on her list is the fact that, during the early phase of the 2009 pandemic, some countries were following their national guidance based on an older version of WHO pandemic preparedness guidance while WHO was following the updated version. In addition, she cites the fact that vaccines arrived in many countries after their first waves of the pandemic were over.

Health authorities were criticized for calling for large sums to be spent on vaccines and antivirals at the time yet, in retrospect, available data show that antivirals helped to save lives and that vaccines were effective in immunizing populations, Shindo says.

In mobilizing against H1N1 in 2009, WHO dispatched three million oseltamivir treatments to 72 countries in two weeks. Diagnostic kits were sent to 140 countries. Over the course of a year more than 78 million doses of a new vaccine went to 77 countries.

The process of revising WHO pandemic preparedness guidance in line with lessons from the 2009 H1N1 pandemic started this year and involves consultation with WHO's 194 Member States. Initially the Organization will report progress on this to countries at the Executive Board meeting in January next year and then at the World Health Assembly in May.

Shindo says that the revised guidance is likely to retain the whole-of-society approach involving all sectors, but that two components could be treated differently: the severity of the pandemic and the phases of the pandemic, a system used to determine all aspects of the response. Still, she adds, given the confusion over these elements, the revision process is far from over. These and other elements could change. 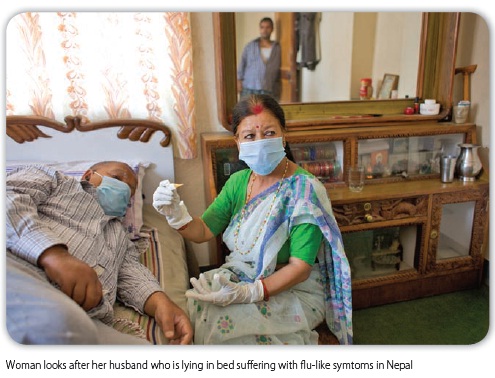 Yet such guidance on pandemic influenza preparedness is important. Low- and middle-income countries, in particular, rely on it, while many high-income countries tend to make their own plans. "An influenza pandemic is a global event and, therefore, when revising WHO guidance it is important to have countries' agreement on the concept of 'phases', 'severity' and other terminology," Shindo says.

The challenges for health authorities preparing for the next pandemic are numerous so solid guidance is essential.

Why plan for flu outbreaks and spend money to stockpile resources that may never be used? How should health authorities respond to an evolving health threat when national budgets are tight? And, in future, how should they communicate uncertainty in a fast-moving situation that is emotionally and politically charged? "People are scared in outbreaks because the source of the fear is invisible," Shindo explains. "They get angry too because outbreaks expose the weaknesses of their health systems, putting these systems under immense strain and then people suffer as a result."

A WHO study released in 2011, Comparative analysis of national pandemic influenza preparedness plans, shows that more than 100 countries had such plans in 2009. "Some plans have since been revised in light of the 2009 experience, but others are left as they were in 2009. And even where countries have plans, many are just on paper, they have never been tested in a desktop exercise, simulation or drill," Shindo says. "There needs to be a political push forward."

Among the plans that are up to date are those in Cambodia and Singapore, two of the countries included in the 2011 WHO study.

Cambodia shows that even with limited resources it is possible to revise plans in accordance with WHO guidance. According to Dr Nima Asgari, a WHO emerging disease surveillance and response expert in Cambodia, the country revised its pandemic preparedness plan following the H1N1 pandemic to incorporate local lessons learnt after the pandemic.

Asgari says that WHO helped Cambodian government on the ground during the 2009 H1N1 flu pandemic, assisting in surveillance efforts and outbreak response, and then followed up as the Cambodian health ministry revised its preparedness plan.

WHO guidance is also being followed in Singapore in plans for the way the spread of a future pandemic would be communicated to the public, says Jayne Lim, assistant director of policy and control in the health ministry's communicable diseases division.

Singapore is also reviewing its response framework for pandemic influenza to take into account new evidence that emerged following the 2009 pandemic. "Pandemic preparedness plans should be pragmatic, based on available resources. This applies to both developed and developing nations," Lim says.

Globally there are lessons from the 2009 pandemic response: disease surveillance and identification are fairly good. But communication must be effective, careful and precise, otherwise it can backfire, become politically fraught and difficult to correct. Preparedness for a pandemic is a difficult concept to define and execute, and is not the same thing as preparing for a flood or other natural disaster.

People and information move fast. Pandemics are not likely to happen the way countries plan for them. "The whole world was expecting the next pandemic to start in south-east Asia," says Dr Hande Harmanci, a medical officer who was working with WHO's Global Influenza Programme in 2009. "It emerged in the Americas."

Gary Nabel, director of the vaccine research centre at the National Institutes of Health in the United States of America, says that the 2009 virus strain did not exist before the epidemic exploded. "We need to do more than prepare for future viruses based on existing strains," he says. Nabel is on one of several teams researching a universal, or at least a more broad-based, flu vaccine. 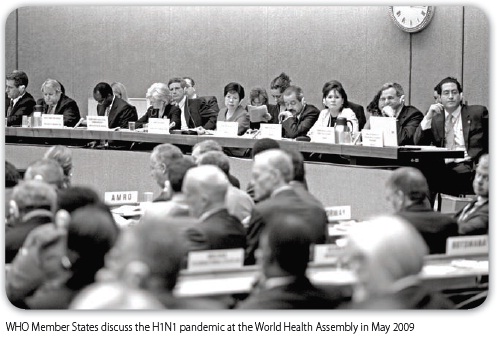 Debate over the 2009 H1N1 pandemic response  the first pandemic for which countries had ever prepared in advance  lives on. Arguments continue over the death toll. A study published in the Lancet Infectious Diseases journal in September estimates that hundreds of thousands of people lost their lives in the first 12 months of the 2009 H1N1 influenza pandemic, many times more than the 18 500 laboratory confirmed deaths officially reported to WHO from April 2009 to August 2010. This suggests that good surveillance and reporting are essential for producing more reliable data, Shindo says.

Critics still say WHO and other international institutions exaggerated the importance of the outbreak and colluded with for-profit drugs manufacturers; charges that WHO rejects. In the 2011 Report of the Review Committee on the Functioning of the International Health Regulations (2005) in relation to Pandemic (H1N1) 2009, an assessment of the global response to the H1N1 pandemic, an international panel of experts concluded that WHO had performed well overall during the pandemic although there were shortcomings. It found no evidence of misconduct.

The panel, which reviews adherence to the legally-binding International Health Regulations (IHR), warned, however, that the world was ill-prepared to respond to a severe influenza pandemic or to "any similarly global, sustained and threatening public-health emergency". To address this, it recommended that countries implement more fully the core national and local capacities called for in the IHR, as well as embrace a multi-sectoral approach and strengthen their health-care systems.

WHO gives countries technical support to implement these rules and is preparing to report on the progress it has made in revising the current 2009 pandemic preparedness guidance for countries to the World Health Assembly in May 2013, WHO's highest governing body, as recommended by the IHR review panel.

The 2009 pandemic highlighted the importance of control and response, says Gavin Smith, a respiratory virus and disease control expert based in Asia. "The public relations was a disaster and, unfortunately, led to a perception of the WHO and scientists crying wolf. This has to be managed better in future."