Securing access to medicines and other health technologies in developing countries continues to be among the major challenges for global health. The challenge lies in ensuring that existing health products are delivered at affordable prices and that innovations and discoveries meet the health needs of developing countries. This policy problem calls for both global and national policy instruments. When in 2001 the Commission on Macroeconomics and Health categorized diseases as type I, II and III based on the extent to which they affected countries at different economic levels, it was alienating for many public health professionals.1 However, it represented a reality. The classification captured the idea that the existing system provided inadequate incentives for the development of health technologies designed to address diseases that primarily affect developing countries (type II and III diseases).

An underproduction of public goods accounts for the underlying market failure. The knowledge generated by research is truly a public good only if it is made available for anyone to use without restriction. However, such a public good will be underprovided, according to economic theory, since the benefit to society from producing the good will outweigh the returns to the producers of the good. Hence, less knowledge will be generated than is socially desirable. As Nobel Prize winner Joe Stiglitz once noted, "The central public policy implication of public goods is that the state must play some role in the provision of such goods; otherwise they will be undersupplied." He described two strategies that could be adopted: (1) to increase the appropriability/excludability of the returns through intellectual property protection, or (2) to increase direct government support for research and development (R&D).2 If the public good has global applications, as is the case for most research, a further problem lies in generating collective action by states to avoid free riding.

Intellectual property rights address this problem by allowing producers to capture some of the social benefit through measures such as patents and a time-limited monopoly period. These measures create incentives for private companies to invest in R&D and develop new technologies while also making profits by charging high prices, reflecting R&D costs, during the monopoly period. This model has hitherto worked reasonably well for type I diseases in high-income countries, which have willingly paid prices high enough to incentivize companies to invest in R&D. In poorer countries the system fails to provide adequate incentives because their purchasing power is so small that they are unable to pay the high prices incorporating the R&D costs.

This systemic failure triggered a process in the World Health Organization (WHO) that has now lasted for nearly 10 years. The Commission on Intellectual Property Rights, Innovation and Public Health was established in 2003 after a World Health Assembly (WHA) resolution and issued a report with 60 recommendations in 2006.3 Subsequent intergovernmental negotiations, the Intergovernmental Working Group on Public Health, Innovation and Intellectual Property (IGWG) process, concluded with a Global Strategy and Plan of Action on Public Health, Innovation and Intellectual Property that was endorsed by the WHA in 2008.4 However, one important outstanding issue was how to incentivize, finance and coordinate R&D. This was deferred to the Expert Working Group on Research and Development: Coordination and Financing, which presented its report in 2010.5 Member States of WHO then requested through the WHA that this work be continued through a Consultative Expert Working Group on Research and Development: Financing and Coordination (CEWG). In April 2012 the 20-member CEWG group, representing all WHO regions, published an analysis of "current financing and coordination of research and development, as well as proposals for new and innovative sources of financing to stimulate research and development related to Type II and Type III diseases and the specific research and development needs of developing countries in relation to Type I diseases".6

The CEWG analysed more than one hundred different financing and allocation mechanisms proposed by countries, academia, civil society or the private sector.7 We grouped these proposed mechanisms into 15 categories and analysed them according to a broad array of criteria, including public health impact, efficiency and cost-effectiveness, technical and financial feasibility, intellectual property management, delinking R&D financing from product prices, access to products for patients, governance and accountability and capacity-building. A key assessment criterion was whether the mechanism operated in a way that delinked the costs of R&D from the price of the product, that is, whether R&D was funded from sources other than patent-protected monopoly prices, which would allow the health products to be sold at an affordable cost.

Based on our analysis of the proposals, we reached the following set of recommendations ( Box 1 ) on global policy efforts to promote R&D relevant to the specific needs of developing countries: R&D should be conducted by an open knowledge innovation approach in which R&D outputs are in the public domain or made available through appropriate open licensing approaches. 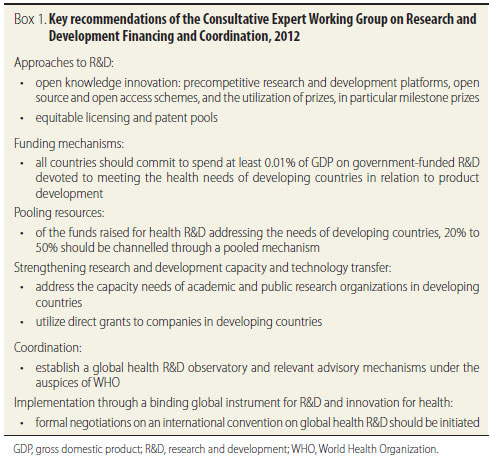  Increased sharing of R&D outputs should be facilitated through the use of patent pools.

 Financial resources should be more efficiently used and better coordinated by using pooled funding mechanisms, and some of the funds should be devoted to capacity-building in developing countries through measures such as direct grants to companies.

 Increased financing should be based on increased contributions from governments and philanthropic sources in light of the market failures related to private investments.

 R&D needs to be better coordinated given scarce resources, and WHO should have the central role in strengthening coordination through its convening capacity and its normative mandate rooted in its representative governance structures and accountability mechanisms.

We have assessed current financial contributions by examining existing data on investments in health research. Such data have clear limitations. Thus, one of our recommendations is to establish a global health R&D observatory under the auspices of WHO. We have concluded, nonetheless, based on needs assessments encompassing the current product pipelines of product development partnerships, that all countries should commit to spending at least 0.01% of their gross domestic products (GDPs) on government-funded R&D to develop technologies for the specific health needs of developing countries. This amounts to around 6 billion United States dollars (US$) a year, or approximately twice the current investments. We propose that 20-50% of this amount (i.e. around US$ 1 to 3 billion) be pooled through competitive international mechanisms to prioritize funding where needs and opportunities are defined through appropriate mechanisms. In addition, we suggest that countries make these commitments within a context in which they invest from 0.05% to 0.10% (developing countries) and from 0.15% to 0.2% (developed countries) of their GDPs in government-funded health research of all kinds, making sure that other areas of health research are also sufficiently addressed.

Specific minimum commitments by all countries across all income levels are needed to meet the global challenge of generating R&D that addresses the specific health needs of developing countries. Commitments should be secured through agreements to limit free rider problems, optimize the global contribution to this joint public good and achieve fair burden sharing.

To ensure that proposals are acted upon, the CEWG suggests that the recommendations be implemented through a global binding instrument, specifically an international convention on global health R&D. Such a convention would be under the auspices of WHO and in compliance with Article 19 of the WHO constitution. Its basis could be the agreed Global Strategy and Plan of Action and the CEWG recommendations presented above. We believe the time has come to agree on a concerted framework for R&D targeting the particular health needs of developing countries to ensure that commitments are fulfilled. It is also time to secure knowledge production for global health, which is a global public good, through appropriate regulations. Within the environmental sector several mechanisms rooted in international conventions contribute to the production of public goods.

Our recommendations, if acted upon by the 65th WHA in May 2012, will lead to a system, complementary to the current intellectual property system, that will address the market failures we have identified. Such a system will generate important global public goods by encouraging the fair contributions and active participation of all countries and by stimulating increased collaboration and sharing of knowledge between research institutions. By promoting more public investment and alternatives to product pricing as a way to incentivize and finance R&D, it will ensure the supply of products for developing countries at more affordable prices. These results, we believe, will successfully bring to a close 10 years of effort, to the benefit of the millions of people who are sick or dying because they lack access to the health care products they need.

Submitted: 26 March 2012
Accepted: 27 March 2012
Competing interests: We have been Chair (J-AR), Vice-Chair (CC) and rapporteurs (LCG, HH, LL, BMM) of the Consultative Expert Working Group on Research and Development: Financing and Coordination (CEWG) at WHO. Bongani Mayosi is Head of the Department of Medicine of Groote Schuur Hospital at the University of Cape Town, and his department has received funding from several pharmaceutical companies for a variety of institutional research projects.