Ending polio, one type at a time

Countries have endorsed a plan for the polio endgame, one that hinges on making inactivated polio vaccine more affordable for low-and middle-income countries. Patrick Adams reports.

In 2000, the polio eradication campaign seemed to be nearing its end. Wild type 2 poliovirus had been stamped out worldwide the previous year, while poliovirus types 1 and 3 had been confined to a few hundred cases. But then, the virus did something the experts didn't expect.

Somewhere on the island of Hispaniola in the Caribbean a child developed paralysis as a result of the live poliovirus used to make the vaccine. Cases of vaccine-associated polio paralysis had been known for many years, but were - and still are - extremely rare. But what was alarming about this case was that the vaccine-derived virus had spread similar to a wild virus, and was causing an outbreak.

Twenty-one children in the Dominican Republic and Haiti that make up Hispaniola became paralysed and two died before the outbreak could be quelled by mass vaccination campaigns. The episode revealed a troubling new possibility: that the vaccine of choice in most countries, the trivalent oral polio vaccine, could itself lead to new polio outbreaks.

Although such outbreaks have occurred in 16 countries since the Hispaniola outbreak, they are extremely rare, given the 10 billion doses or more of oral polio vaccine administered to 2.5 billion children. 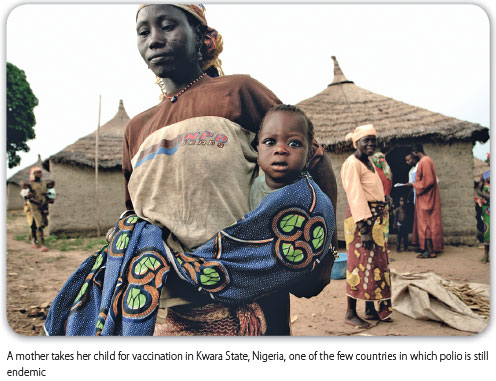 For officials at the World Health Organization (WHO) the eradication puzzle had suddenly become more complex.

"We realized that not only would we have to eradicate the wild poliovirus but we would also have to eradicate the vaccine-derived virus as well," says Bruce Aylward, Assistant Director-General for Polio, Emergencies and Country Collaboration at WHO, one of the four spearheading partners in the Global Polio Eradication Initiative (GPEI) along with Rotary International, the US Centers for Disease Control and Prevention and UNICEF.

"So we had this big new problem and we had to come up with a whole new solution. It's been quite a ride," Aylward says.

Since then, Aylward and his colleagues have been developing that "new solution": a plan to take the world from eradicating the wild poliovirus to ensuring the polio endgame will achieve a world free of all polio-paralysis, be it from wild- or vaccine-derived polio. If successful, polio would become the second infectious disease to be wiped out after smallpox was eradicated in the 1970s.

Governments and their partners have invested some US$ 9 billion in 25 years of polio eradication efforts, according to the Global Polio Eradication Initiative, but the world is only expected to realize a return on this investment - estimated at a minimum direct savings of US$ 40-50 billion by 2035, in low-middle-income and low-income countries - if the three remaining endemic countries: Afghanistan, Nigeria and Pakistan, eliminate the disease, while the rest of the world remains polio-free, according to a study published in Vaccine 2010.

While vaccination efforts are most intense in these three countries, all countries need to maintain high immunization coverage with their polio vaccination programmes as they all face the risk of re-infection as long as cases are still occurring somewhere in the world.

This year the World Health Assembly, which governs WHO and the Global Polio Eradication Initiative, endorsed the plan for the polio eradication endgame, declaring the completion of polio eradication a "programmatic emergency for global public health" and calling on countries to provide funding.

WHO Director-General Dr Margaret Chan told the Assembly that polio eradication was "at a tipping point between success and failure," highlighting the funding gap of US$ 945 million until the end of 2013 (against a US$ 2.19 billion budget for that period). This year alone, the cash shortage has led to a reduction in mass vaccination activities in 24 high-risk countries, putting millions of children at risk. 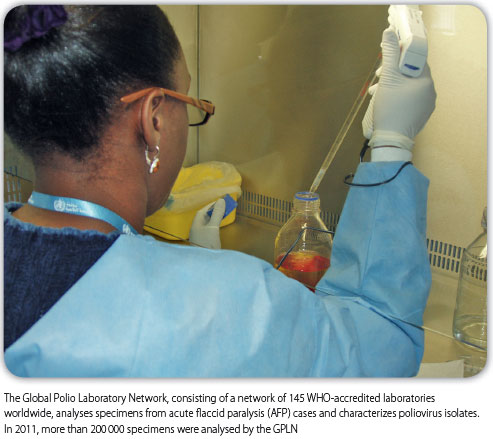 Bivalent vaccines protect against two serotypes of a disease, trivalent vaccines against three. In the case of polio, although there are three types of the poliovirus, it is the type 2 component in the trivalent oral polio vaccine has caused more than 80% of cases of vaccine-derived polioviruses that have caused outbreaks and so removing the type 2 component from the vaccine is vital to success.

And that is where IPV comes in. IPV, which is administered through injection, provides immunity to all three types of poliovirus but, unlike the oral vaccine, does not cause vaccine-derived polio because the virus used in its manufacture is dead.

Unlike the oral vaccine, however, IPV does not invoke intestinal immunity needed to stop transmission. So a child who receives only IPV won't develop polio, but could excrete the virus perpetuating its circulation. That's why a combination of both the bivalent oral vaccine and IPV is now necessary.

"IPV would serve as a kind of insurance policy by boosting children's immunity to type 2 and would have the added advantage of also boosting types 1 and 3 immunity and, thereby, accelerating the removal of those last wild polioviruses," says WHO's Roland Sutter, coordinator of the Research and Product Development Team of the Global Polio Eradication Initiative.

This two-prong strategy, involving the bivalent oral polio vaccine and IPV, Aylward and Sutter believe, will succeed in eliminating the main risk due to the type 2 virus. After the eradication of all remaining strains of wild poliovirus transmission, countries could stop using the bivalent oral polio vaccine, eliminating any residual remaining risks associated with the type 1 and 3 components contained in that vaccine.

The chief hurdle to this plan is cost. At a minimum of US$ 3 a dose, IPV is far too costly for the low-income countries that might need it most. So the fear when developing the plan was that, in the unlikely event that a type 2 vaccine-derived poliovirus did emerge during or immediately after the switch, children with immunity only to types 1 and 3 wouldn't be protected as countries would not be able to afford IPV.

The challenge, then, was to find a way to use IPV in a significantly less expensive but yet sufficiently effective way. And Aylward knew that wouldn't be easy. "If you're a manufacturer, there isn't a great incentive to find ways to make your product more cheaply available," he says. "We sometimes had to push hard."

Eventually, in 2010, WHO experts collaborated with researchers in Cuba and Oman, among other countries, to look at four possible scenarios to reduce the cost of IPV use: reducing the number of doses, using a fractional (1/5th) dose, increasing the interval between doses and producing the vaccine in resource-limited settings. "All of this work was driven by a developing country need for a cheap solution to this circulating vaccine-derived poliovirus problem", says Aylward, "and the really exciting thing is that most of this research took place in developing countries."

Moreover, he says, the results were far better than expected. "Will one-fifth of a dose work?" he says. "Yes, just as well as a full dose for boosting. Will two doses work as well as four doses? Yes, if you give them four months apart. Can you make an affordable IPV product in a low-income country? Well, it turns out you probably can. These were all big surprises for many working in immunization."

"What we need now is for manufacturers to agree to produce intra-dermal fractional dose IPV, and for licensing bodies to rapidly examine whether this potential solution can undergo fast-track licensing - given the strong public health imperative - so that we have it within a year," says Aylward. But for all of the promising data, that has yet to happen.

"The A380 is on the runway, but we haven't gotten it up in the air yet. And that requires a lot of people cooperating."