New but costly forms of hadron therapy to treat certain cancers raise important questions about how much health systems can afford to pay, but for some cancers, including many child cancers, they are among the most promising treatments we have. Gary Humphreys reports.

When Alison Ainsworth was told that her eight-year-old son, Izaak, had an inoperable brain tumour (pilocytic astrocytoma), she and her husband, Ged, who live in Wigan, in the United Kingdom, were faced with some grim choices. "The options at that point were conventional radiotherapy and chemotherapy, neither of which seemed very promising," she recalls.

Despite the progress that has been made in conventional radiotherapy over the past few decades, X-rays still cause damage to surrounding tissue because of photons' tendency to scatter as well as to blast on through the target, causing the equivalent of an exit wound. This makes them particularly unsuitable for the treatment of tumours in delicate organs such as the brain or the eye, or indeed any tumour that is buried deep in the body. And they represent a particular threat to children, "Children's heads are growing," explains Ed Smith, Izaak's doctor, and a consultant in clinical oncology at The Christie, a cancer centre in Manchester. "So damage to bone and muscle tissue can cause facial development problems later on, while damage to structures such as the pituitary gland can affect the growth process itself."

Alison and Ged decided to commit their son to an 18-month course of chemotherapy. The results were disappointing. "After 12 months it was clear that chemotherapy wasn't working. Izaak was very tired and very sick and there was no change in the size of the tumour," Alison recalls. What he needed was something that could hit the tumour without causing collateral damage. What he needed was proton therapy. 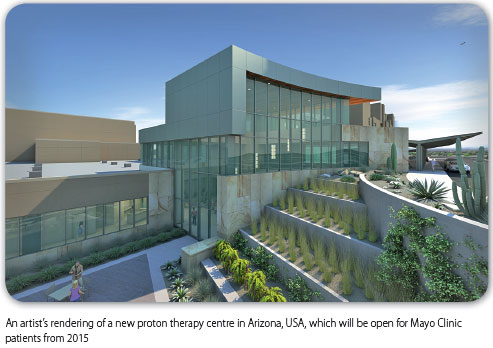 Proton therapy - which, along with carbon ion therapy, is a form of hadron therapy - is used because it targets tumours more precisely than the specialized, radio-therapeutic X-rays used in conventional cancer treatments.

Adriana Velazquez, co-ordinator of the Essential Medicines and Pharmaceutical Policies Department at WHO, said: "Cancer is one of the noncommunicable diseases that claims high numbers of deaths globally, both in high and low income countries. Sophisticated and costly medical devices that include high end technology and complex research, like proton therapy for cancer treatment, look promising, even if such treatment is currently very expensive. We hope that further research and uptake of these technologies will make these high-end devices more available for effective treatment in complicated cases of cancer care globally."

The treatment uses a specially adapted particle accelerator, such as a cyclotron or synchrotron, to fire a beam of positively charged, high-energy, subatomic particles at a tumour. The energy released by the particles breaks up the DNA of the target cancer cells, preventing replication and causing cell death. According to the Particle Therapy Co-Operative Group, an association representing hadron therapy professionals, at the end of last year more than 95 000 patients had been treated worldwide with particle radiotherapy, of which about 84 000 were treated with protons.

Protons have several other advantages over the photons delivered in X-rays. First, they carry enough energy to disrupt tumours to a depth of 30cm, and because they are 'heavy' they penetrate tissue with minimal diffusion. They also slow down relatively quickly, reducing the exit wound effect, and release most of their energy at the end of their path. "By varying the strength of the beam it is possible to control quite precisely where this explosion of energy takes place," explains Wolfgang Schlegel, Head of the Department of Medical Physics in Radiation Oncology at the German Cancer Research Centre in Heidelberg, Germany. Because the proton beam can also be deflected by electro-magnets it is possible to target the entire tumour in three dimensions.

Given that protons seem to be so well suited for zapping tumours, why are they not used more? Three reasons are commonly cited. The first is the lack of data proving the efficacy of proton therapy, an issue highlighted in an article published by the British Medical Journal in April. However, as Schlegel points out, while such criticism may be justified with regard to the increasing use of protons for the treatment of prostate cancer, notably in the United States of America, the benefit case for the treatment of cancers in children, and young adults, and the treatment of adult cancers of the skull base region and spine is increasingly strong. Smith concurs: "Evidence of late effects takes longer to come through. So of course there's a paucity of evidence, but it is very clear that the bulk of the tissues are not being irradiated with proton therapy and that has to be a good thing."

The second objection to proton therapy is cost. At around US$ 150 million - the ball park figure generally cited - proton therapy facilities are not cheap even for high-income countries. But like many therapies that were initially prohibitively expensive for most patients in most countries, this too could one day change. For the time being though, it is expensive. 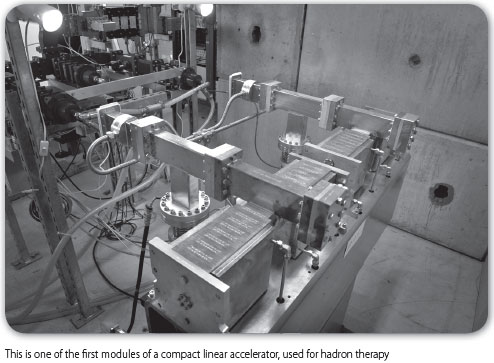 Schlegel is quick to point out that US$ 150 million is not the cost of building a facility, but includes other items, such as staffing and building maintenance, his point being that those costs are built into conventional radiotherapy too. He also argues that facilities that can achieve optimal patient throughput while charging enough per patient can break even at the end of the year. So what does treatment cost? "It depends on what insurance companies are ready to pay." says Schlegel, adding that the Heidelberg facility charges 20 000 per patient (US$ 26 000). "As the ion therapy centre was funded as a research unit we can cover our running costs if we treat between 600 and 800 patients a year," he says.

And while, 20 000 per treatment may sound like a lot, as Ugo Amaldi, one of the scientists behind the development of ion synchrotrons optimized for medical applications at the European Organization for Nuclear Research (CERN) points out, tomotherapy, the latest kind of X-ray therapy costs around 10 000 per treatment. "So the price difference [between proton and radio therapy] is not so dramatic," Amaldi says.

The third obstacle to proton therapy's development is the fact that cyclotrons and synchrotrons eat up a lot of floor space. In the USA, the University of Pennsylvania's cyclotron, for example, built in 2009, weighs in at slightly over 200 metric tonnes and shoots protons through a 91 m pipe bristling with gadgets into treatment rooms where 90 tonne motorized cranes are used to achieve the optimal targeting of tumours.

For Domenico Campi, a CERN staffer since 1984 and now vice president of the board of ADAM, a Geneva-based company, the bulk and cost of proton therapy technology is a major stumbling block. "If there isn't a real jump in the technology, the cost is going to remain so high that it is by no means clear that proton therapy can replace traditional X-ray radiotherapy," Campi says. In collaboration with CERN, the Geneva company is developing new compact linear accelerators, otherwise known as LINACS, which Campi hopes will reduce the size and the cost of building proton therapy centres constructed as specialized units within cancer treatment centres.

Ugo Amaldi, chairman of ADAM's scientific committee, also sees a future in which more compact 'single room' facilities are used, based on LINACS, and believes that carbon ions will play a more important role, noting that they offer a potential advantage over protons in the treatment of radio-resistant tumours (roughly 10% of all solid tumours), which cannot be controlled with either X-rays or protons.

Amaldi persuaded the Italian government to finance the construction of a carbon ion treatment centre in Pavia, northern Italy, which opened its doors to patients in 2011.

For Schlegel, laser technologies may offer the best chance for a significant reduction in size and cost of hadron therapy, noting that two German research institutes, one in Dresden and another in Munich, are already looking at short pulse, high energy 'table top' lasers. "Currently they are not able to generate the kind of energy levels required, but in five or perhaps 10 years they might," Schlegel says.

The future may well be bright for hadron therapy, even if the treatment itself is still in its relative infancy. Cross-border collaboration to conduct more research is already well under way, with CERN-based organization ENLIGHT, which helps to coordinate European efforts in hadron therapy, formed in 2002. The group already numbers 300 clinicians, physicists, biologists and engineers from 20 European countries.

CERN's attempts to harness hadron therapy show how a field that is often seen as being completely unrelated to health can have potential public health benefits.

Of course, 10 years is a long time to wait for new technology for the mother of a child with an inoperable tumour. For Alison Ainsworth a solution was needed now. In the end she opted for proton therapy, and was referred to the National Health Service's National Specialised Commissioning Team (NSCT), which offers a limited number of overseas referrals to patients considered suitable for this treatment (the United Kingdom doesn't currently offer the therapy, but plans to open two facilities in 2017). The NSCT agreed to fund Izaak's treatment at the ProCure treatment centre in Oklahoma, USA, including travel and accommodation. The trip lasted two months. "The doctors were amazing," Alison says. The truth is that for all its shortcomings, for patients like Izaak there really is no alternative to proton therapy, and as Smith puts it: "These are the technologies that we have available now, and it is surely our responsibility to use them sooner rather than later."