Senator Roméo Dallaire commanded the UN Assistance Mission for Rwanda in 1994. He spoke to Ben Jones about helping combatants after conflict, child soldiers and why writing his books meant "going back to hell".

Q: How has armed conflict changed and what effect do these cha nges have on the mental health of soldiers?

A: We have stumbled into a new era of conflict. Rather than a hiatus in the use of force, we have seen a continuum of failing states and imploding nations, massive human rights abuses and, at the same time, this calls for the use of force or for the military to act in a completely different scenario. It is not about fighting an army in opposition and winning a war but, on the contrary, about integrating the use of force with the humanitarian effort, the political effort and the development effort to help nascent democracies establish security.

This has created significant ethical, moral and legal dilemmas for practitioners, be they the diplomats or soldiers or police working in the field, who are doing a lot of on-the-job training and ad hoc stuff. So we're creating traumas in people who are trying to do the right thing but are not sure exactly what the right thing is.

Q: Is it harder to heal mental scars than physical ones?

A: It is harder to make governments realize the sense of urgency that's required to bring therapy and support to heal the mental injuries, because often they can't see it. An arm dangling has an immediate response and so we've often considered the mental injury to be something we can handle later, only to realize that the levels of suicide that we're living with simply don't tolerate that sort of scenario. Also, the longer you wait to help someone with therapy, the worse the injury gets and the more difficult it is to pull them up.

A cultural shift was required to make people realize that mental injuries, or operational stress injuries, had to have the same priorities as physical ones.

What we're seeing is that those who are affected psychologically, who in the past were hurting a lot because of the stigma, are suffering less and there is less stigmatization. But the dimension that is not well understood is that these operational stress injuries can be fatal.

Q: Is the international community now strong enough to prevent genocides such as the one we saw in Rwanda happening again? 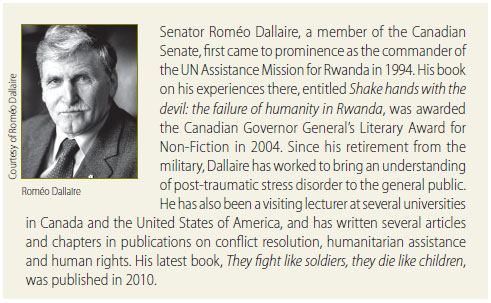 A: No, we are not strong enough yet. Understanding the drivers of violence must be accompanied by the will to intervene, from smaller scale development and economic projects to larger and more coordinated commitments over the long-term. This includes the need to build domestic political will to enable foreign policy decisions that can ultimately prevent mass atrocities and genocide.

Q: How can a peacekeeper be mentally prepared for child soldiers?

A: My first encounters with them were in Rwanda, during the civil war. They were combatants and they fought that way. Not only that, the youth movement of the extremist party of the government was used as a militia and they were the ones who conducted much of the slaughter of the genocide.

So if the kids are using weapons, and they are conducting killing operations and so on, and you have a responsibility to protect, all that I was able to discover by 2004 is that you treat them as belligerents and you have the right to self-defence. The problem for a soldier confronted with child combatants is: how many do you kill before you start burning a bunch of your own brain cells? So that's what has pushed us into looking at child soldiers not as a social problem, but as a weapons system.

Q: So you're changing the language around child soldiers then, essentially?

A: I believe that by acknowledging the use of these children as a "weapons system", we acknowledge the perversity of it. In no way does the use of the term ignore the humanity of the children. While what I've been doing is considering: how do we neutralize this use of this very effective weapons system, how do we make it a liability to adults to want to recruit them and ultimately, stop the recruitment?

Q: How do you and the organization you're involved with, the Child Soldiers Initiative, prevent the recruitment of child soldiers?

A: By building the capacity of military and police, by providing options through training and research for their possible interactions with child soldiers. Training of the military and police also builds confidence and relationships at the community level.

Also, by engaging community members, those affected by war and former child soldiers, we gain innovative and critical perspectives and buy in from local actors to address the use of children in armed conflict.

Q: To what extent can you rehabilitate a child soldier? How far is it possible to make them just a child again?

A: I'm just back from three weeks in Rwanda, the Democratic Republic of the Congo and south-western Sudan, where the Ugandans, the Sudan People's Liberation Army, the Congolese, two UN missions and Central African Republic forces are all caught up trying to go after both the Lord's Resistance Army and some of the organizations that fought in Rwanda.

They're using child soldiers, both the Lord's Resistance Army and those who fought in Rwanda. I saw child soldiers reached by UN missions using radio who were convinced to sneak away and then were received by rehabilitation centres. The level of sophistication has improved since 2001 when I was in Sierra Leone, where the kids were mixed in with the adults at the rehab centres. Now, because they are separated, the children are given opportunities to live without fear, they are given options of schooling and learning a trade and they are offered therapy developed to meet the needs of child soldiers, including the girls. We're seeing an extraordinary desire in these kids to change.

Q: How successful has that been?

A: In fact, the communities want it to happen. However, they were fearful of what these kids could revert to doing and so they're the ones who've been asking both government and nongovernmental organizations (NGOs) to help them understand and integrate these kids back into society, particularly the child soldier leader: the 14-year-old who's been commanding 20-odd other kids for three or four years, who has all kinds of leadership skills. The efforts now in Rwanda are by far ahead of the others, and Rwanda has invested significantly, both financially and politically, in reintegrating them into society.

Q: How do you gauge the success of these efforts?

A: We are told that, in the case of Rwanda, their success rate is over 70%. This is verified by NGOs and the UN.

Q: How has post-conflict rehabilitation of soldiers changed to reflect the changing nature of conflict?

A: When soldiers came back from the Second World War and from the Korean War, the USA and Canada mobilized massively, there were loads of programmes to permit the soldiers to come back to work, study or get a farm. Those programmes covered a lot of the psychologically injured soldiers.

But there was a lot of hit and miss, a lot of guys became alcoholics, a lot of them ended up in the streets.

That situation did not force the military to study these psychological injuries and do something about it. There was very little, if any, hard data on how to prepare, sustain in the field and ultimately identify and then bring treatment to soldiers injured psychologically in conflicts?

In 1997 I went public with my own psychological problems and the Canadian government started to build capacity with Veterans Affairs Canada, who had been doing some work in this area. It's been 15 years and there's been a lot of guys and girls who've been affected, and their families too, but they have programmes of peer and family support now.

There are therapists and a decompression area in Cyprus where Canadian troops spend five days rest and get back into normality. They do this after their tour is complete, but before returning to their families. There is follow-up for those who are injured psychologically.

Q: How hard was it for you to write first about Rwanda and then about child soldiers?

A: The book on the genocide took me three years to write. It took me seven years to want to sit down and write it! It was three years of going back to hell. There was absolutely no therapeutic value there, it was an overwhelming desire to tell my kids what had happened, and I was going to live through that again, because that's the only way to do it.

The other book on child soldiers is where I'm concentrating a lot of my time, effort and research work.

Q: So when people talk about writing books as being cathartic, that wasn't your experience?

A: No. I don't know how they do that. My exercise was how to put in a book a year in which I saw paradise on earth being overrun by the devil and the rest of the world not giving a damn.

Q: What does the next year hold for you?

A: I'm in the process of negotiating a third book on the conceptual basis of warfare for our era - the fundamentals behind the doctrines, tactics and equipment that everyone is using, and whether a new generation of leaders is required who are far more aware of all the other disciplines that are now needed in conflict.