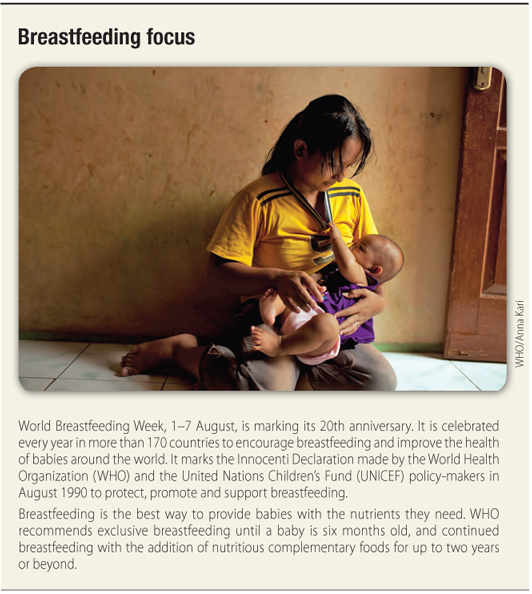 WHO has called for more women in low- and middle-income countries to have access to a broader range of safe and effective contraceptive products.

At the Family Planning Summit in London last month, WHO also urged more support for integrating family planning services into basic health care and a systematic examination of why so many women are still unable to obtain contraception when needed.

An estimated 222 million women and girls in developing countries who do not want to get pregnant lack access to contraceptives as well as family planning information and services. WHO estimates that maternal deaths could be reduced by one third if all the women who wished to avoid pregnancy had access to effective contraception. Unmarried, young, poor, migrant and rural women often have no access to family planning counselling and services.

A mix of pathogens are responsible for the deaths of more than 60 children in Cambodia. At the time of going to press 64 had died, according to the country's health ministry.

Based on the laboratory results gathered in early July, many of the samples tested positive for enterovirus 71 (EV-71), which causes hand, foot and mouth disease. The EV-71 virus has been known to cause severe complications among some patients.

Several other pathogens, including dengue and Streptococcus suis were also identified. in some of the samples. The samples were found to be negative for H5N1 and other influenza viruses, severe acute respiratory syndrome and Nipah virus.

The top 10 dangers posed by poor use of medical devices has been released by the Emergency Care Research Institute (ECRI Institute).

Alarm hazards including alarm fatigue  health-care workers becoming overwhelmed by the sheer number of alarms on medical devices  is top of the list.

Exposure to radiation from chemotherapy and radiotherapy is second, while errors giving medication by infusion pumps came third.

Researchers took into account several factors when compiling the list, such as the likelihood of the hazard occurring and its harmfulness.

The United Nations food standards body has agreed on a new set of regulations  including the maximum level of melamine in liquid milk formula for babies  to protect the health of consumers across the world. Other measures adopted include new food safety standards on seafood, melons, dried figs and food labelling.

The Codex Alimentarius Commission, jointly run by the Food and Agriculture Organization and WHO, sets international food safety and quality standards to promote safer and more nutritious food for consumers worldwide. Codex standards often serve as a basis for national legislation, and provide the food safety benchmarks for international food trade.

Recommendations include the wrapping of pre-cut melons to prevent harmful bacteria, a maximum of 10 µg per kilogram of carcinogenic aflatoxins in dried figs, and a maximum limit of 0.15 mg/kg for melamine, which can be lethal in high concentrations, in liquid infant milk.

The International Livestock Research Institute has published a list of geographical hotspots for human-animal diseases (zoonoses), such as tuberculosis and Rift Valley fever. According to the study13 zoonoses are responsible for 2.4 billion cases of human illness and 2.2 million deaths every year. 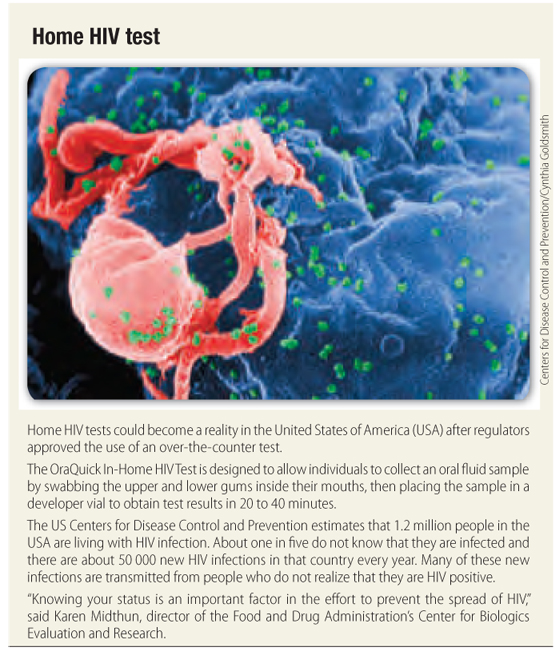 The countries with the highest zoonotic disease burdens are Ethiopia, India, Nigeria and the United Republic of Tanzania.

The study, published in the Lancet, states that these nations have less than a 5% chance of meeting the target of the first Millennium Development Goal .

The researchers examined trends in the weight and height of more than 7.7 million children in 141 countries between 1985 and 2011.

Professor Majid Ezzati, from the School of Public Health at Imperial College, London in the United Kingdom of Great Britain and Northern Ireland, explained: "Our analysis shows that the developing world as a whole has made considerable progress towards reducing child malnutrition, but there are still far too many children who don't receive sufficient nutritious foods or who lose nutrients due to repeated sickness. Severe challenges lie ahead."

The Millennium Development Goal aims to end poverty and hunger by the year 2015, and one indicator of progress is the proportion of underweight children.

According to the researchers, more than 250 million children were mildly to severely underweight in 2011, with 17 countries  primarily in sub-Saharan Africa and Oceania  not showing any significant improvement.

New, more effective vaccines are not having the expected impact in the drive to eliminate polio in Afghanistan and Pakistan because not enough children are being vaccinated, according to a study published 4 July in the Lancet.

Sharp declines in vaccine uptake in these two countries have led to a rise in the number of new infections between 2006 and 2011, even though new vaccines introduced during this period of time have proven to be more effective against the main circulating strain of the virus.

Poliovirus exists in three strains, with wild type 1 being the most prevalent. It mainly affects children under five and causes paralysis in about one in 200 cases. In most parts of the world it has been eliminated by sustained vaccination programmes in the late 20th century. Afghanistan and Pakistan are two of three countries  the other being Nigeria  that have never managed to eliminate polio.

Scientists from Imperial College London and WHO assessed the effect of immunization campaigns in Afghanistan and Pakistan by analysing data collected by national surveillance programmes. They also assessed the effectiveness of the three varieties of polio vaccine against the predominant type 1 strain of the virus.