Despite the bad press that traditional Chinese medicine sometimes receives, proponents believe it represents an untapped pharmacopeia and are using cutting edge biotechnology to prove it. Gary Humphreys reports.

Professor Karl Wah-Keung Tsim, a neurobiologist who heads a research team in the Life Science Division of the Hong Kong Special Administrative Region University of Science and Technology, believes that, for all the challenges it may face, traditional Chinese medicine is potentially a pharmacological gold mine. "There are around 100 000 formulas going back 2000 years, drugs that can be used to treat a range of illnesses from depression and insomnia, to osteoporosis," he says, pointing out that researchers have already found at least one gem in the form of artemisinin, which is known as qinghaosu in Mandarin.

Traditional medicine, primarily the use of a combination of herbs prescribed in compounds, is hugely important in China, where it represents around 40% of the Chinese pharmaceutical market, with annual sales of US$ 21 billion. A popular choice among patients in China, it is also a choice that the government increasingly supports. According to Vice Health Minister, Wang Guoqiang, in 2011 the Chinese government invested roughly US$ 1 billion (RMB 6 billion) in traditional medicine research and projects, nearly tripling the amount invested in 2010. 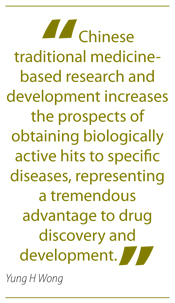 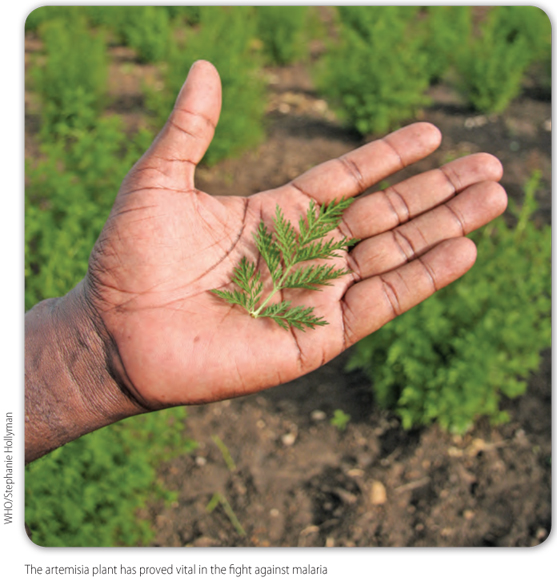 Traditional Chinese medicine is big in China and other Asian countries, where, according to WHO, up to 80% of some populations use it for health care. However, it is less accepted elsewhere, partly because of the lack of an evidence base as well as concerns about quality. Such doubts are typified by the reports produced on a regular basis by the Medicines Healthcare Products Regulatory Agency in the United Kingdom of Great Britain and Northern Ireland, which recently said that there is a substantial global trade in Chinese remedies of questionable quality. In an attempt to prevent the sale of poor-quality products, in May 2011 the European Union made it illegal to sell any traditional Chinese herbal treatments not registered under the European Union Traditional Herbal Medicines Registration Scheme.

Improving drug quality standards is at the top of China's agenda and is the focus of the work being done by Professor Liu Liang, director of the State Key Laboratory for Quality Research in Chinese Medicines, in Macau, China, where he and his team of researchers are working on quality control of traditional Chinese medicines, using contemporary technology. "Our main focus is how to arrive at some standards in order to achieve consistency in production, including in the manufacturing process," Liang says. 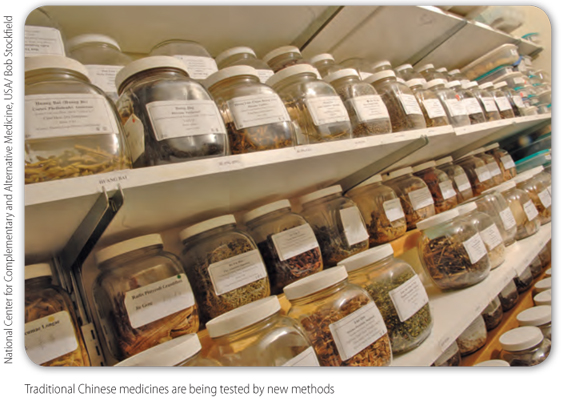 Convincing the global research and development community of the evidence basis for traditional Chinese medicine is proving even more challenging than establishing quality standards. However, here too Chinese researchers in state and academic institutions are pushing forward. They are trying to isolate the active ingredients of traditional medicines, a task made difficult because most Chinese medicines contain multiple components. Even simple recipes such as danggui  the two-herb decoction prescribed to stimulate the immune system and blood circulation, which has been the focus of Tsim's research efforts for the past decade  are molecularly complex, because the herbs themselves have multiple ingredients. "A single herb can have hundreds of components," Tsim says.

Professor Yung H Wong, director of the Division of Life Sciences at the Biotechnology Research Institute in Hong Kong Special Administrative Region, believes that cutting-edge biotechnology is the key to unravelling that complexity. Like Tsim and Liang, Wong is also a firm believer in traditional medicine, primarily because of the biological leads it may offer. "It has been used successfully in Chinese culture for thousands of years in the treatment of diseases," he says. "Chinese traditional medicine-based research and development increases the prospects of obtaining biologically active hits to specific diseases, representing a tremendous advantage to drug discovery and development." 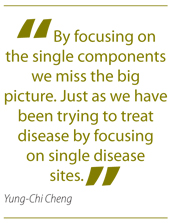 Wong and his team are using a high-throughput screening platform that incorporates the latest technology. "We use the platform to screen large collections of extracts, fractionated extracts and pure compounds," says Wong, adding that he is targeting more than 150 cell lines and over 300 molecules.

For other researchers it is the very complexity of the interactions between the different components of the herbal compounds that makes for the effectiveness of traditional medicines. Far from being an obstacle to drug research, the complexity is what makes research on these compounds revealing. "By focusing on the single components we miss the big picture. Just as we have been trying to treat disease by focusing on single disease sites," says Professor Yung-Chi Cheng, an oncology researcher at Yale University who is working on huang qin tang, a four-herb combination discovered some 1800 years ago.

Huang qin tang was originally prescribed to reduce diarrhoea and stomach upsets. "I wanted to see if it would reduce the side-effects of chemotherapy without interfering with the chemotherapy itself," he says. Cheng used liquid chromatography and mass spectroscopy, to separate compounds and identify the individual components of the mixture. He then used phytomics to study the specific biological activity performed by each component of the herbal composition. "Using these techniques we were able to identify 57 chemicals," Cheng says. "We then worked up a biological response profile, monitoring roughly 18 000 gene products in human cells to see what changed under the impact of the formula."

Cheng found that the compound reduces chemotherapy-induced inflammation in the gastrointestinal tract through three different mechanisms. "Individually these mechanisms are not that potent, but all three working together make a significant difference," he says. Not only were the mechanisms different, the chemicals involved in them were different as well. And something else was happening. "The mixture repairs the tissue damage caused by chemotherapy, and here again the chemicals involved are quite different from the chemicals suppressing the nausea." For Cheng this clearly demonstrates that it makes no sense to try to understand the biological impact of this compound in terms of the action of single components.

With funding from the National Institutes of Health in the United States of America, Cheng has more recently developed a testable drug, in the form of a capsule containing a dehydrated herbal product. The drug, which is about to go into phase II clinical trials, will probably be available in three to five years. However, for Cheng, doing the science and establishing an evidence base that garners respect for the field of traditional Chinese medicine is just as important as producing the individual drug. "Traditional Chinese medicine is a human treasure and it should be shared with the world," he says.