A new diagnostic test for tuberculosis  including its most common resistant form  is being rolled out at record pace, with South Africa its biggest implementer. The challenge now is to treat the new cases. Claire Keeton reports.

Molecular technology originally developed to detect anthrax in the United States postal service is revolutionizing the diagnosis of tuberculosis, particularly in countries where tuberculosis is a common cause of death among people with HIV infection. The Xpert MTB/RIF  a rapid, fully-automated nucleic acid amplification test  is the first major breakthrough in tuberculosis diagnostics since sputum smear microscopy was developed more than 100 years ago.

But unlike sputum smear microscopy, which has poor sensitivity in HIV-positive people, or sputum culture, which takes three to six weeks to yield basic results and even longer to yield the results of drug susceptibility tests, the new test detects Mycobacterium tuberculosis and resistance to rifampicin, a commonly used tuberculosis drug, in less than two hours.

Some 77 countries are rolling out the new test, but none has embraced it more enthusiastically than South Africa. So far the sub-Saharan country has procured 288 Xpert machines and over a million test cartridges for tuberculosis  representing 59% of global supply.

Health minister Dr Aaron Motsoaledi calls the new technology a "bazooka against tuberculosis," using military language to describe its potential to help his country combat the country's tuberculosis epidemic. "With early treatment  made possible by using the new system  we stand a better chance of controlling this epidemic. Tuberculosis is responsible for 80% of deaths among people with HIV," Motsoaledi says.

Motsoaledi even performed the first test himself at the Prince Mshiyeni Hospital Laboratory in the province of KwaZulu-Natal in March 2011. "As his campaign around this technology spreads, we have had people coming forward, saying 'we want the test the minister says is so good for tuberculosis'," says Professor Wendy Stevens. 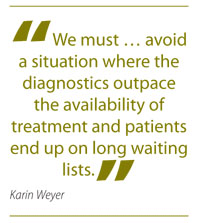 As head of the National Priority Programmes at the National Health Laboratory Service in Johannesburg, Stevens is overseeing the rollout. "So far, we have 152 machines up and running  we are at about 6070% national coverage  and we aim to have the next 136 functioning by the end of 2013." 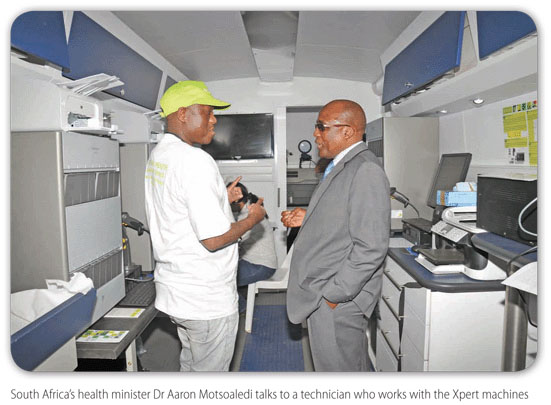 To take the new test, patients produce a sputum specimen (fluid coughed up from the lungs) just as they do for microscopy and culture diagnostic methods. The specimen is mixed with a reagent and the mixture is put into the cartridge which is inserted into a module in the machine. The results are called up on a computer screen.

South Africa's Xpert machines range from having 4, 8 and 16 to 48 modules, and the country will soon be installing the new 80-module version that can process up to 320 tests in a day and is known, in industry jargon, as "high throughput. "

"We have gone from zero budget, when we started, to US$ 21.5 million (R190 million) in the first year for the equipment, cartridges and training. We now have funds committed until 2016, this covers the annual budget needed to test every South African," Stevens says.

Since South Africa introduced the new test, the rate of tuberculosis diagnosis among symptomatic individuals seen in primary-health-care centres has doubled from 9 to roughly 16%. About 7% of all confirmed cases are resistant to rifampicin.

In the past, many patients were lost to follow-up and HIV-positive patients died while waiting for their test results. "Now we are making the diagnosis and initiating treatment before the person dies," says Dr Francesca Conradie, president of the Southern African HIV Clinicians' Society.

Drug-resistant tuberculosis is a major challenge not least because patients need to be treated with expensive second-line drugs, which have more severe side-effects than first-line drugs, and take up to 24 months to effect a cure. When these patients also have HIV infection their chances of survival are poor.

"Tuberculosis patients with unknown resistance to rifampicin often used to be treated with conventional first-line drugs, which are much less effective when rifampicin resistance is present and whose use may lead to further resistance. In countries using the new diagnostic test, this should no longer happen," says Dr Karin Weyer, coordinator of the Laboratories, Diagnostics and Drug Resistance unit at the World Health Organization (WHO). 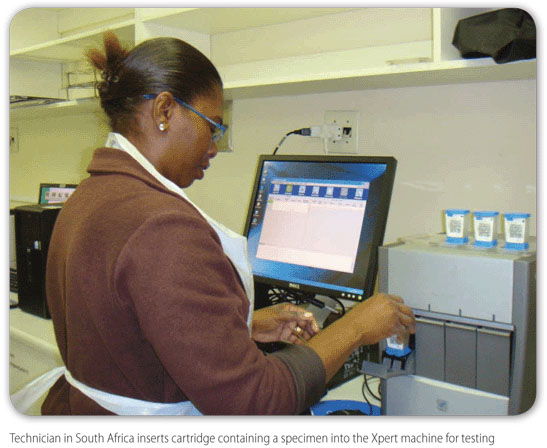 "The Xpert test narrows down the possibilities, so that we can detect the patients with drug-susceptible tuberculosis and treat them appropriately  these are the vast majority  and quickly identify those with rifampicin resistance who need additional drugs, including second-line medicines," Weyer says, adding that introduction of the new diagnostic test does not mean that countries should do away with conventional microscopy and culture services which, she says, "are still needed to monitor treatment and investigate resistance to drugs other than rifampicin. "

Although South Africa is by far the world's biggest implementer of the new tuberculosis test, the latest figures from the WHO monitoring of the global rollout show that China, India, the Philippines and the Russian Federation  which have an estimated 60% of the world's drug-resistant cases  have ordered Xpert machines with a total of 404 modules and 131 820 MTB/RIF cartridges.

As resistant cases are rapidly confirmed, the next challenge will be increasing access to second-line medicines with which to treat them, says Weyer. She and her colleagues have drawn important lessons from the roll-out of HIV testing in the early 2000s, when many cases were confirmed before antiretroviral treatment was widely available.

"That led to a successful campaign for access to treatment and now, a decade later, the treatment gap for HIV is no longer so great," Weyer says. "We must forecast the amount of drugs that will be needed and build the necessary clinical capacity to avoid a situation where the diagnostics outpace the availability of treatment and patients end up on long waiting lists. "

While WHO is playing a pivotal role in the rollout of this technology, in terms of policy and guidelines development, it was the Foundation for Innovative New Diagnostics (FIND), a non-profit Geneva-based outfit that works on improving diagnostics in poor countries, that first recognized the potential of this technology for tuberculosis control.

The Xpert system was developed in 2002 by Cepheid Inc. based in Sunnyvale in the United States of America (USA) to test for anthrax following a series of attacks in the postal services in 2001.

FIND approached Cepheid Inc. and concluded a co-development agreement with the company, which subsequently adapted the technology for tuberculosis diagnosis in partnership with the University of Medicine and Dentistry of New Jersey and with funding from the US National Institutes of Health and the Bill & Melinda Gates Foundation.

In negotiations brokered by FIND, Cepheid Inc. agreed to preferential pricing for the Xpert MTB/RIF assay for the public sector in 145 countries. Initially, a 75% reduction in the price of the machines and cartridges was agreed, so the cartridge was to cost about US$ 18 each, considerably less than in the private sector (US$ 6080).

But even with this concession, the test was still beyond the reach of poor countries, so the US government (USAID and PEPFAR), the Bill & Melinda Gates Foundation and health financing organization UNITAID stepped in. This led to an agreement with Cepheid Inc. in August 2012 on a 40% cut in the price of the cartridge to US$ 9.98 for the 145 countries.

UNITAID has also provided US$ 25.9 million to buy 200 Xpert machines and 1.4 million Xpert MTB/RIF cartridges for 21 of those countries with a high burden of tuberculosis, multidrug-resistant tuberculosis and tuberculosisHIV co-infection. The TBXpert Project, which is overseen by the WHO Stop TB Department, plans to roll out the new test in these countries with additional funding for implementation from international donors in the next three years, Weyer says.

"The Xpert is a brilliant piece of technology  an absolute game changer  and I don't think this is the end of it," says Conradie.