In Nigeria's megacity of Lagos, lifestyles resemble those of developed countries and hypertension is increasingly becoming a problem. Motunrayo Bello reports.

Joseph Otu (not his real name) found out about his blood pressure problem the hard way. Woken up in the middle of the night with a headache, he had difficulty speaking and felt weak on one side of his body. The 54-year-old Nigerian professional driver had no idea what was happening to him, but feared the worst.

His family took him to a clinic near his home in Ibafo in the sprawling megacity of Lagos, where a nurse checked his blood pressure.

Blood pressure readings are comprised of two values: one for systolic and one for diastolic pressure; anything equal to or above 140 over 90 is considered high. Otu's stood at 175 over 110, a level at which he faced an increased risk of stroke, heart attack and kidney failure. "We started praying," says Otu.

The fact that Otu had no idea about his blood pressure status before clinical diagnosis is not unusual. High blood pressure requires the heart to work harder than normal to circulate blood through the blood vessels. The symptoms of high blood pressure, also known as hypertension, are not always obvious, which makes regular check-ups essential.

Nigeria is one of many developing countries where the health services have focused on treating infectious diseases, such as malaria and tuberculosis, but in recent years, noncommunicable conditions have become an increasing problem. One of the most prevalent noncommunicable conditions worldwide, hypertension is responsible for an estimated 45% of deaths due to heart disease and 51% of deaths due to stroke globally. 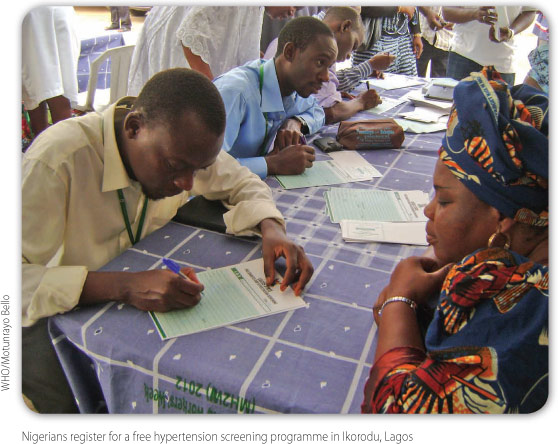 Of WHO's six regions, the African region has the highest prevalence of hypertension estimated at 46% of adults aged 25 and above, according to WHO's Global status report on noncommunicable diseases 2010.

Moreover, the problems caused by hypertension are made worse when people are not aware of the necessity for - or unable to afford - regular blood pressure checks.

This year's World Health Day, on 7 April, aims to promote more awareness of the causes and consequences of high blood pressure, as well as how it can be prevented, and to encourage national and local authorities to do more about this growing problem.

"We hope this campaign will encourage more adults to check their blood pressure but also that health authorities will make blood pressure measurement affordable for everyone," says Dr Shanthi Mendis, a medical officer at WHO.

In many developing countries few people go for routine medical check-ups to monitor the risk factors associated with noncommunicable diseases. And Nigeria is no exception.

Dr Kingsley Akinroye, executive director of the Nigerian Heart Foundation, a nongovernmental organization (NGO), says that, "the health system offers diagnosis and treatment only to those who pay for it". Even when people do go for a medical check-up, diagnosis of such chronic conditions can be unreliable at primary health level.

Toyin Ogunde, a shopkeeper living in Lagos, who went to the doctor reporting headaches and dizziness, says she was prescribed medication for typhoid and malaria before her family finally persuaded her to go to the Lagos State University Teaching Hospital for a second opinion.

According to Dr Olayinka Ogunleye, who works in the hypertension unit at that hospital, it costs around 1000 Nigerian Naira (US$ 6.36) for a patient to have his or her blood pressure checked. Ogunleye says that although this fee may deter some people from finding out their blood pressure status, many others are simply unaware of the health consequences or indifferent to the risks of untreated hypertension. "People don't think it is important to spend money and time on their health; they would rather spend more money on luxuries," he says. 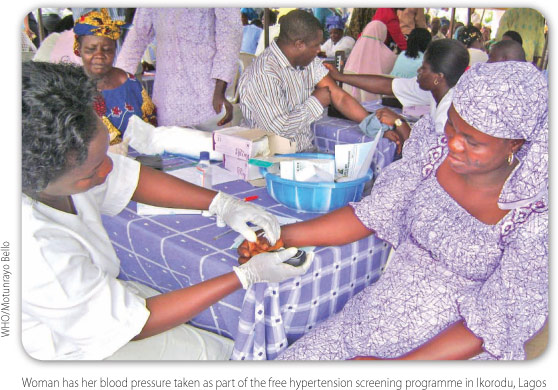 Currently, fewer than 4% of Nigerians are covered by health insurance. These include civil servants working for the federal government and women and children under the Maternal and Child Health Project, which is funded by the US government (USAID).

There are plans to roll out coverage for such basic and essential health services including access to diagnosis and treatment for hypertension under a national health bill, which the federal government is currently considering.

Given the lack of routine blood pressure checks in Nigeria, it is not surprising that the country's statistics on hypertension are unreliable. "Most data are outdated speculation based on mathematical models and surveys that are scanty and unrepresentative with low validity," says Dr Anthony Usoro, national coordinator for noncommunicable diseases at the Federal Ministry of Health in Abuja.

"The lack of reliable data has made it very difficult for policy-makers to concentrate efforts to control the emerging health burden of the disease." Worse, says Akinroye, the lack of hard data has sometimes been used to deny the existence of the problem.

But for all his concerns regarding the lack of adequate programmes at both the state and federal level, Akinroye does see signs of a change in attitudes. He points out that the federal government is currently putting together a national policy on noncommunicable diseases. "The policy is due to be out later this year and will aid the response to hypertension," he says.

While Nigeria's plans to tackle the problem have yet to be announced, the factors that are making it worse are clear. "The high prevalence of hypertension is explained in part by lifestyle changes, many related to changing environmental and social factors," says Dr Obinna Ekwunife, a lecturer at the University of Nigeria in the south-eastern town of Nsukka.

Ekwunife cites factors such as increased salt and fat intake from the consumption of processed foods, increased tobacco use and sedentary lifestyles. "An increasing number of Nigerians are driving to work and participating in jobs with minimal physical activity," he says.

Nowhere are these problems felt more acutely than in the country's burgeoning urban areas. Lagos is a rapidly expanding city that is home to an estimated 10 million people, and, according to a recent United Nations Habitat report, is projected to overtake Cairo to become the largest city in Africa with 12.4 million inhabitants in 2015.

As Lagos state commissioner for health, Dr Jide Idris spends a lot of his time thinking about the particular heart health challenges faced by the city's residents, challenges which, he says, are by no means limited to poor diet and lack of physical activity.

"Urbanization brings risks other than sedentary lifestyles and unhealthy diet. City life has implications for levels of stress and loss of family cohesion as well," he says. Idris is also keen to point out that hypertension is not just a rich man's problem. "Hypertension cuts across gender and socioeconomic status," he says.

Idris emphasizes the importance of traditional prevention efforts, which he says are the main focus of his strategy in Lagos state. In recognition of the fact that prevention and diagnosis of hypertension can be weak at primary health care level, a key aspect of these efforts is to strengthen such services in the state's 277 clinics.

"We are providing diagnosis in public health facilities and there are some financial mechanisms that can support the poor people," Idris says. For tertiary care, he says that a new, high tech cardiac and renal centre is currently under construction in Gbagada district in the north of the city.

Idris says he hopes that state-wide campaigns, using resources such as local government councils, community-based organizations and NGOs. are making a difference. "I personally believe that the awareness is much better than when we started," he says.

Akinroye too expresses qualified optimism, noting that more Nigerians are aware of basic information regarding the effect of high fat and salt consumption or tobacco use on blood pressure. Joseph Otu is one of them. "My doctor told me of the contributing factors," he says, "and I am now encouraging my wife and friends to eat and live healthier as much as possible so they don't end up the way I did." ■