Rocky road from the Semashko to a new health model

Health care is receiving much higher priority and more funds than ever before in the Russian Federation. Russian health economist Igor Sheiman talks to Fiona Fleck. 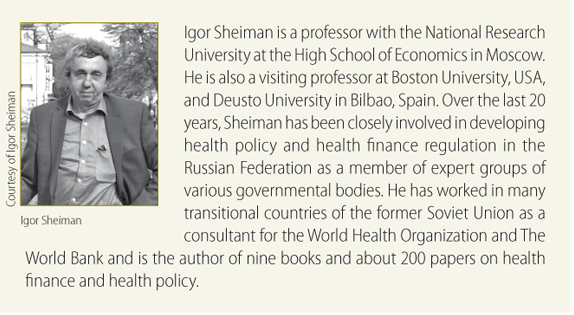 Q: The "Semashko" centralized health-care system brought huge advances in population health in the former Soviet Union, which was  in some ways  one of the first countries to achieve something close to universal coverage of basic health-care services. What was the secret of the system's success?

A: I also value the role of the Semashko system in the first decades of Soviet power. The system provided an acceptable level of medical care that was needed to treat common diseases and ensured comprehensive health-care coverage for the population. It worked relatively well up to the 1970s, when new medical technologies became available and people started to demand better care. The Semashko model was built as a multi-tiered system of care with a strongly differentiated network of service providers, where each of the five levels corresponded to the severity of the disease (district, central rayon, municipal, oblast and federal hospitals) and these were all connected by a sound referral system. Central to this model was the district physician, who was responsible for providing and coordinating the medical care for the population in his or her catchment area. This model made it possible to integrate the activities of other medical services and was very efficient in the economic sense: low cost, health-care coverage could be universal and was rolled out to everyone free of charge.

Q: Why did health progress slow down in the 1970s? What went wrong?

A: In the 1970s, we moved from the Semashko model to the model that emphasizes specialization in outpatient care. The role of the district physician has reduced considerably. Today, the trend towards specialization has reached the point of absurdity. Also, district physicians have lost their responsibility for the health of the people registered with them. As a result, the system seems to be "sailing without a captain", leaving patients to navigate their way through a sea of medical technology and the public has lost confidence in district physicians. According to surveys, these doctors have only a 14% approval rating in the population. People tend to by-pass district physicians and go to specialists directly, which has, in turn, triggered an unsatisfied demand for specialists. We still have universal coverage, in principle, but while most services are said to be free, people often pay for them  mainly because the volume of medical benefits is poorly linked to the financial resources available.

Q: The end of the Soviet Union triggered an economic collapse in the Russian Federation. The so-called economic "shock therapy" advised by World Bank economists has, in recent years, been blamed for the steep decline in life expectancy in the 1990s. Should the economic transition have been handled differently and, in retrospect, is this criticism fair?

A: Unfortunately the so-called economic "shock therapy" was inevitable. The old system of control over society was completely exhausted: the planned economy and the system of centralized governance were not able to guarantee even a minimal improvement in living standards. The start of economic reforms in 1992 was preceded by complete economic collapse. This collapse triggered a high degree of "shock" reform. Some elements of this reform could have been implemented better, privatization being one example. But, in that desperate economic situation, the options were limited. The role of the World Bank is exaggerated, in both the positive and negative sense, since the reform was designed and implemented by the government of that time.

Q: Has the financing reform in the health sector improved the situation?

A: The health financing system of the 1990s can be compared to a beautiful car whose owner forgot to fill its tank with fuel. Contractual relations, new methods of payment for medical care, fund-holding schemes and other innovations in health financing were implemented in a context of acute underfunding and this has not led to a significant reduction in the negative impact of general economic conditions on population health.

A: There were no major health sector reforms. There was a change in the financing model: we switched from budgetary financing to a compulsory health insurance model. This helped to dampen the overall reduction in funding for health care. Thanks to the fixed insurance premiums, the country has come through the transition crisis of the early 1990s with relatively fewer funding losses for health than for other social sectors. But too much was expected of the compulsory health insurance system and, in the end, the premiums did not lead to a significant increase in public health funding. And the new financing system has not contributed much towards building a more rational system of service delivery.

Q: When you headed a team of experts advising the government on health-care reform in the mid-2000s, you argued that the health system was suffering from a lack of funds and inefficient allocation of resources, that an estimated 30% of hospital visits were unnecessary and that 8090% of patients/illnesses could be dealt with at the primary level. Have these aspects improved?

A: Primary health care is still weak today. Over the last five to six years, the government has taken important steps to improve the primary health-care infrastructure and equipment. It has increased the salaries of district physicians and general practitioners. More dramatic changes have taken place in secondary health care. According to the mayor of Moscow [Sergei Sobyanin], the technical level of the hospitals in Moscow is not lower than the average level in hospitals in France and the United Kingdom of Great Britain and Northern Ireland, but the structure of health care has not changed. Inpatient care still dominates, accounting for about 60% of all health-care funding, and this proportion is not changing. Our university's studies show that a significant proportion of patients come to hospital, having bypassed the primary care clinic, that diagnostic tests are duplicated in the clinic and hospital, and that hospital doctors are negative about the adequacy of care at the primary health care level. Also, the coordination between primary health care clinics and hospitals is poor, so there is little continuity of care. Thus, the system of service delivery still requires substantial changes.

Q: How much of what you and your colleagues called for has been done?

A: Not much. First, wage increases have not been accompanied by serious investments on the part of district doctors in improving their competence and coordinating function. The concepts inherent in the traditional Semashko model  such as the importance of primary health care, constant supervision of chronically ill patients, a proactive approach and continuity of care  have almost been lost. Second, the transition to the model of a strong general practitioner, which we called for, is very slow. The health ministry admits that these doctors are needed in rural areas but questions their mass deployment in urban areas. The model of district doctor with very limited therapeutic and coordinating functions still prevails. Third, provider payment methods are still based mostly on a retrospective reimbursement of physician visits, hospital days and so on. Hospitals have financial incentives to admit more patients. The proportion of inappropriate admissions is still high and the average length of stay in a hospital remains unnecessarily long  around two times longer than the average in the European Union.

Q: What is being done to remedy this situation?

A: In recent years health care has been given much higher priority in terms of the funding and attention it receives. The health ministry has started new preventive and health promotion activities, and these are just beginning to reap results in terms of health gains. Between 2006 and 2012, life expectancy increased from 66.6 to 70.3 years and infant mortality dropped from 10.2 to 7.3 deaths per 1000 live births. But the health system as a whole is still badly underfunded and generates high costs. Structural disproportions remain. Hence, the need for more money and the increase in the supply of physicians is a constant feature of the current health system.

Q: How successfully has the country moved from fragmentary health care to an integrated model? In a report in 1996, you said that the health-care system is "illness-oriented and cost-incurring, not health gain oriented nor cost containment focused." Has this changed?

A: The Russian health-care system is still one of the most cost-generating in Europe. It operates a range of factors that generate costs, but in contrast to Western countries, these costs have not "materialized" because the proportion of public funds the country spends is only 3.5% of the gross domestic product compared with 610% in Western Europe. Among the main factors for this are: the weakness of primary-care physicians, excessive specialization of outpatient care (for example, only 16% of all physicians are district physicians and general practitioners in the Russian Federation, compared with 3048% in Western Europe), weak rehabilitation care, and little differentiation between acute and long-term hospital care (hence the high average length of stay in hospitals) and poor interaction between individual health services. All these make the health system require additional money.

Q: Have out-of-pocket payments reduced since the reforms of the 2000s?

A: No, they are growing more rapidly than public spending on health, particularly because of the rising costs of medicines, which are not subsidized. Also, there is a growing demand for private medicine, mainly outpatient care. Private services tend to offer an alternative to services already available in the public sector. The share of private health expenditure in total health expenditure is around 40%, compared with 15%, which is the average for Organisation for Economic Co-operation and Development countries. At present, relatively affluent middle-class people can afford private health services, but that may change with the provision of costly new technologies. Private medical insurance is expanding but currently does not cover more than 5% of the population.

Q: You studied the East German experience of health sector reform in the early 1990s. Which lessons were useful for the Russian experience?

A: In East Germany in the early 1990s, traditional Semashko polyclinics were transformed into independent medical practices. Later on, the process partly reversed and private practitioners began to cooperate with each other in group practices running something similar to the polyclinic model. This experience seemed attractive to us and other post-Soviet countries. Some countries have switched to the model of independent medical practices, but we have not done so and I don't think that was a mistake.

A: The polyclinic model allows you to integrate the work of individual specialties, but its weakness is that each doctor receives about the same salary and, therefore, these doctors are not highly motivated. Our government plans to create highly differentiated pay scales and substantial additional funding has been earmarked for that until 2018. In other words, the polyclinic model has great potential, but its organizational benefits cannot be felt unless doctors have economic incentives as well.