To examine if economic development in China correlates with physical growth among Chinese children and adolescents.

The height, body weight and physical activity level of children and adolescents aged 18 years and under, as well as dietary data, were obtained from seven large surveys conducted in China between 1975 and 2010. Chinese economic development indicators were obtained from the World Bank. Trends in body weight, height, economic data and diet were examined. Tests were conducted to check for correlations between height at 17 years of age and three indicators of economic development: gross domestic product, urbanization and infant mortality rate. Regional differences in physical growth were assessed.

Between 1975 and 2010, the growth of children and adolescents improved in tandem with economic development. The largest increment in height was observed during the period of puberty. Regional inequalities in nutritional status were correlated with disparities in economic development among regions. Over the past two decades, undernutrition declined among children less than 5 years of age, but in 2010 underweight and stunting were still common in poor rural areas. A large increase in obesity was observed in both urban and rural areas, but especially in large cities and, more recently, in small and medium-sized cities and affluent rural areas.

The average weight of children and adolescents has been increasing progressively since the 1970s. Current strategies to combat both child undernutrition and obesity need to be improved, especially in poor rural areas.

Since the economic reforms, income inequalities have increased between western rural areas and coastal areas, as well as between and within rural and urban areas.1111 Cook IG. Pressures of development on China’s cities and regions. In: Cannon T, editor. China’s economic growth: the impact on regions, migration and the environment. London: Macmillan; 2000. These inequalities have probably influenced the regional distribution of malnutrition and how this distribution has changed over time.1212 Jones-Smith JC, Gordon-Larsen P, Siddiqi A, Popkin BM. Cross-national comparisons of time trends in overweight inequality by socioeconomic status among women using repeated cross-sectional surveys from 37 developing countries, 1989–2007. Am J Epidemiol. 2011;173(6):667–75.doi: http://dx.doi.org/10.1093/aje/kwq428 PMID: 21300855
https://doi.org/10.1093/aje/kwq428...

The objective of this paper is to give an overall picture of long-term trends in the growth and nutritional status of Chinese children and adolescents by examining the results of seven large surveys conducted over the past 35 years. We focused on regional disparities in child and adolescent growth and nutritional status, as well as on changes in the pattern and rates of malnutrition after the transition to a more high-fat, high-energy-density and low-fibre diet in an attempt to determine if these changes were associated with the country’s economic development.

Data on the growth and nutritional status of children and adolescents between 0 and 18 years of age were extracted from published data and raw datasets of seven large surveys undertaken in one or more areas with different economic characteristics in China between 1975 and 2010. The following surveys were included: National Growth Survey of Children under 7 years in the Nine Cities of China; National Growth Survey for Rural Children under 7 years in the Ten Provinces of China; National Epidemiological Survey on Simple Obesity in Childhood; Chinese National Survey on Students’ Constitution and Health; China National Nutrition Survey; Chinese Food and Nutrition Surveillance system and China Health and Nutrition Survey. A summary of these surveys can be found in Table 1.

Thumbnail
Table 1
Summary of the nationwide surveys of child and adolescent growth and nutrition used to obtain data for studying child growth, China, 1975–2010

Development indicators for China were obtained from the World Bank;2929 World development indicators. [Internet]. Washington (DC): World Bank. Available from: http://databank.worldbank.org/data/views/variableSelection/selectvariables.aspx?source=world-development-indicators [cited 2013 Dec 3].
http://databank.worldbank.org/data/views... GDP per capita, the Gini index and the percentage of the population living in urban areas between 1970 and 2012.

Mortality rates for infants and for children less than 5 years of age between 1990 and 2013 were obtained from the Global Burden of Disease study.3030 World population prospects: the 2010 revision, volume 1: comprehensive tables. New York (NY): United Nations; 2011.

We examined the statistical associations between physical growth and economic development using ecological comparisons and trends. To explore the relationship between height and GDP and urbanization and infant and child mortality rates, we calculated Pearson’s correlation coefficients (r), adjusting for sex. Trends in the prevalence of underweight, stunting, overweight and obesity were assessed using the χ2 test. SPSS version 13.0 (SPSS Inc., Chicago, United States of America) was used for the statistical analyses.

Between 1975 and 2010, the average height of children and adolescents increased steadily, without any tendency to plateau. The largest increment was noted around puberty, particularly among males, e.g. an increase of 11.9 cm in 13-year-old urban boys. The difference in height between the sexes at 18 years of age increased from 10.3 cm to 12.3 cm during this same period.

Body weight increased in both sexes and all age groups from 1985–2010. After 2005, in all age categories boys were heavier than girls (Fig. 1). To assess whether the increase in adolescents’ average height was associated with economic development – as captured by urbanization, GDP per capita and the Gini index – (Fig. 2), we looked for correlations between two of these indicators and the average height of adolescents 17–18 years of age.

Differences in height were observed in areas having different economic characteristics. Data from the National Growth Survey of Children under 7 years in Nine Cities of China and the National Growth Survey for Rural Children under 7 years in Ten Provinces of China showed that, on average, children of both sexes in rural areas were 2.1 cm (standard deviation, SD: 1.2) shorter than those in suburban areas and 3.6 cm (SD: 2.0) shorter than those in urban areas.

According to the Chinese National Survey on Students’ Constitution and Health, children and adolescents between 7 and 18 years of age who lived in a coastal city were taller, on average, than those living in other provincial capitals. They were also markedly taller, on average, than those living in medium-sized or small cities. Similar differences were observed among rural areas showing high, moderate and poor economic development (Fig. 3).

Fig. 6 illustrates the burden of obesity in areas with different economic characteristics. Large coastal cities were the first to exhibit a rise in overweight and obesity and had the largest increase in prevalence – 32.6% (males) and 19.1% (females) in 2010. Similar increases followed in other areas: first in large, prosperous cities, followed by medium-sized cities with a large middle class and, finally, by the more affluent rural areas. Although an increase in obesity was noted between 1985 and 2010 in western rural areas with low economic development, these areas still had the lowest prevalence of obesity in 2010.

Trends in nutrition and physical activity

In the wake of the 1978 reforms, China underwent many changes in its social structures, living conditions and diet. This has been accompanied by a positive trend in the physical growth of children.3333 Ji CY, Chen TJ. Secular changes in stature and body mass index for Chinese youth in sixteen major cities, 1950s–2005. Am J Hum Biol. 2008;20(5):530–7.doi: http://dx.doi.org/10.1002/ajhb.20770 PMID: 18478539
https://doi.org/10.1002/ajhb.20770... An empirical division of China’s economic development into stages based on the time cycle of China growth surveys facilitates the analysis of its association with trends in children’s growth. In Stage I (before 1975) – out of scope of this analysis – a previous subtle upward trend in growth ceased and even reversed owing to the detrimental effects of famine. In Stage II (1975–1985), children’s growth began to improve again with the recovery of the national economy, and positive trends emerged in older age groups of children in the major cities. In Stage III (1985–1995), physical growth continued to improve in parallel with sustained economic growth. The increment in height among children in rural areas exceeded that seen in children living in urban areas because of improved living standards, health care and increased food supply in the rural areas in the mid-1980s.99 Li H, Zong X, Zhang J, Zhu Z. Physical growth of children in urban, suburban and rural mainland China: a study of 20 years change. Biomed Environ Sci. 2011;24(1):1–11. PMID: 21440834 In Stage IV (1995–2005), even higher growth increments were documented among both urban and rural residents. According to data from 2005 to 2010 (Stage V), the increment has continued and does not seem to be levelling off.3434 Chen TJ, Ji CY. Secular change in stature of urban Chinese children and adolescents, 1985–2010. Biomed Environ Sci. 2013;26(1):13–22. PMID: 23294611

Our study has shown that regional inequalities in child growth and nutrition in China accompany regional economic disparities. Therefore, to promote equitable growth for all children in China, strategies for optimal nutrition need to focus more closely on disadvantaged groups in the poor and underdeveloped areas.

Thumbnail
Table 1
Summary of the nationwide surveys of child and adolescent growth and nutrition used to obtain data for studying child growth, China, 1975–2010 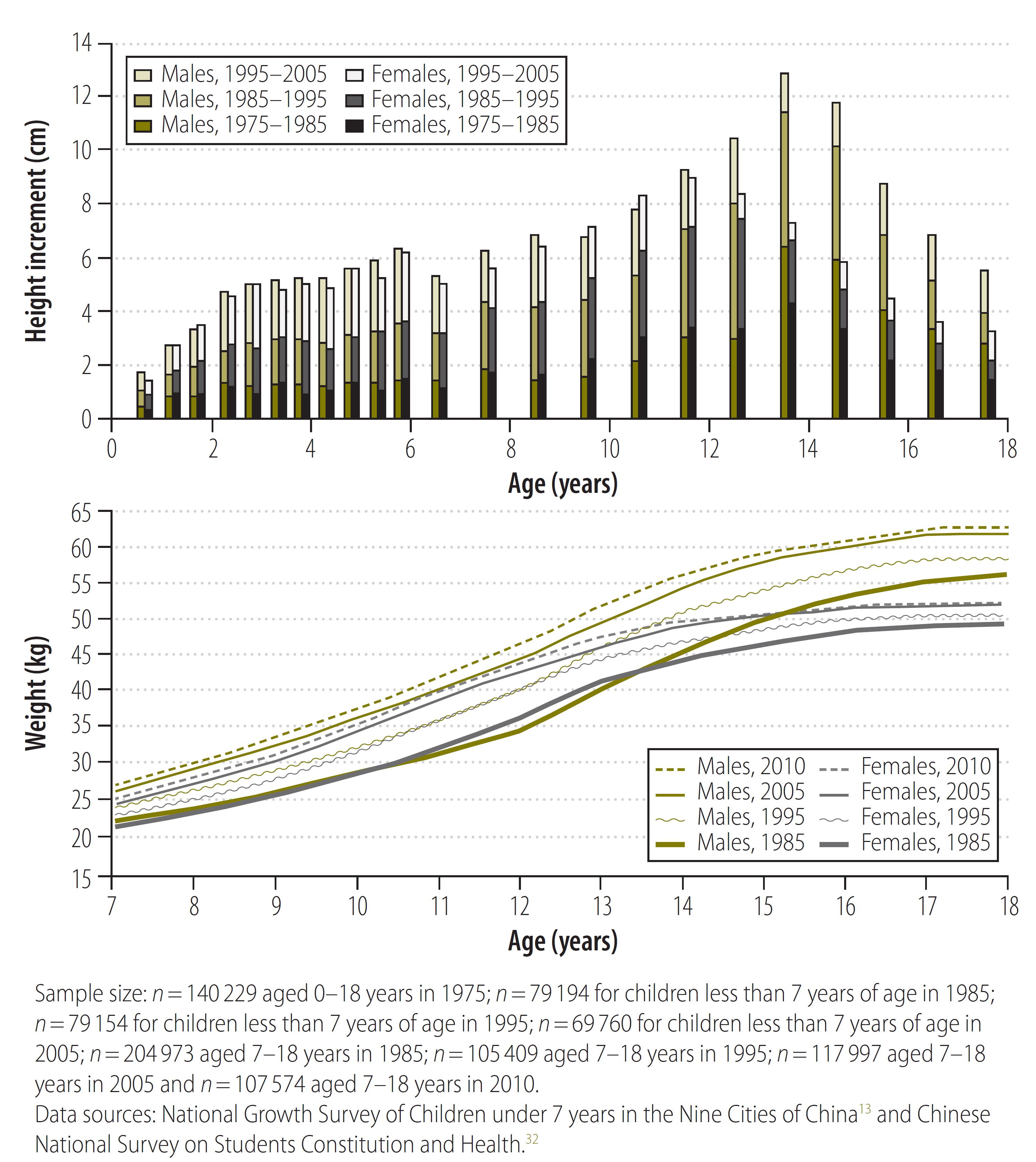 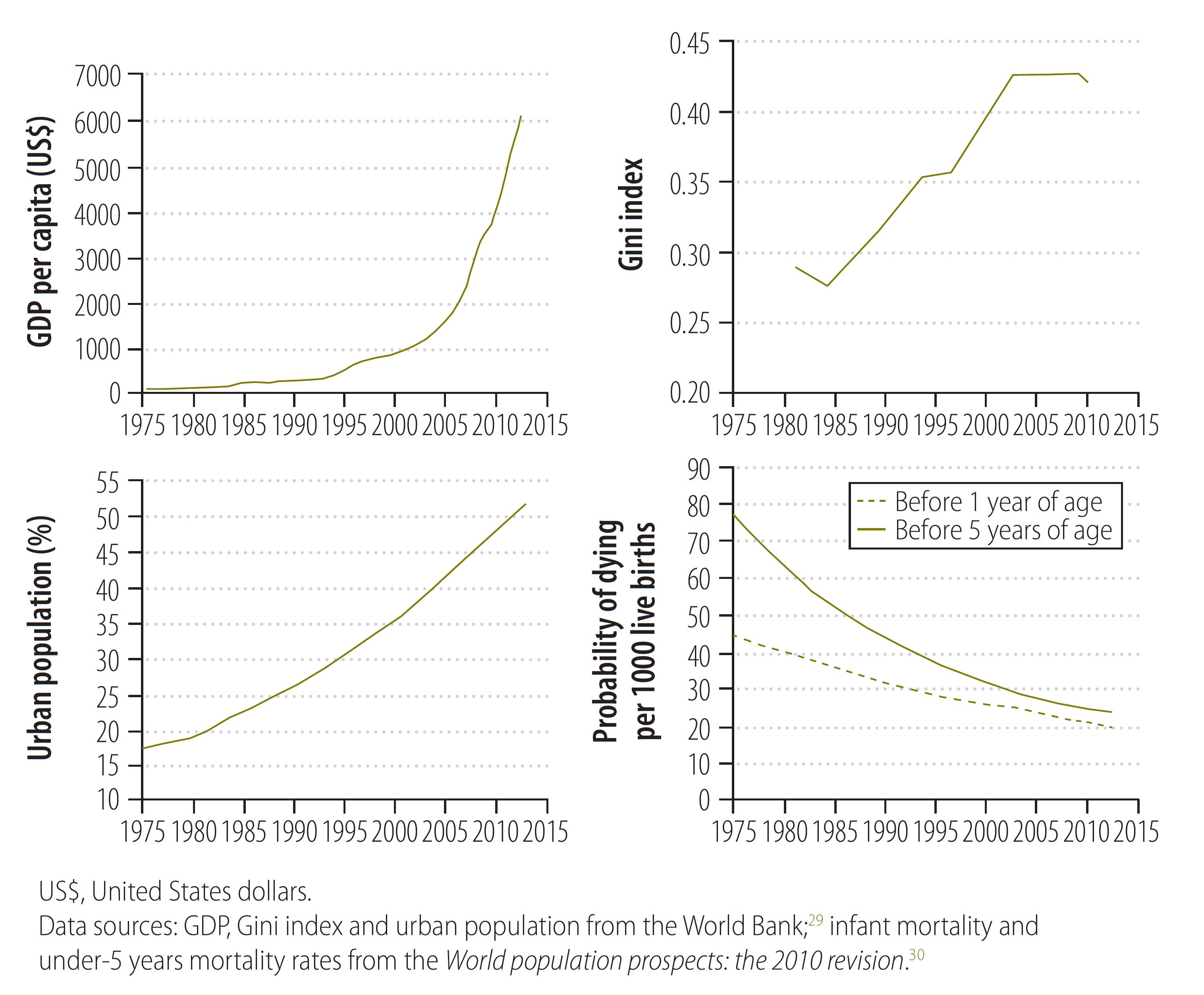 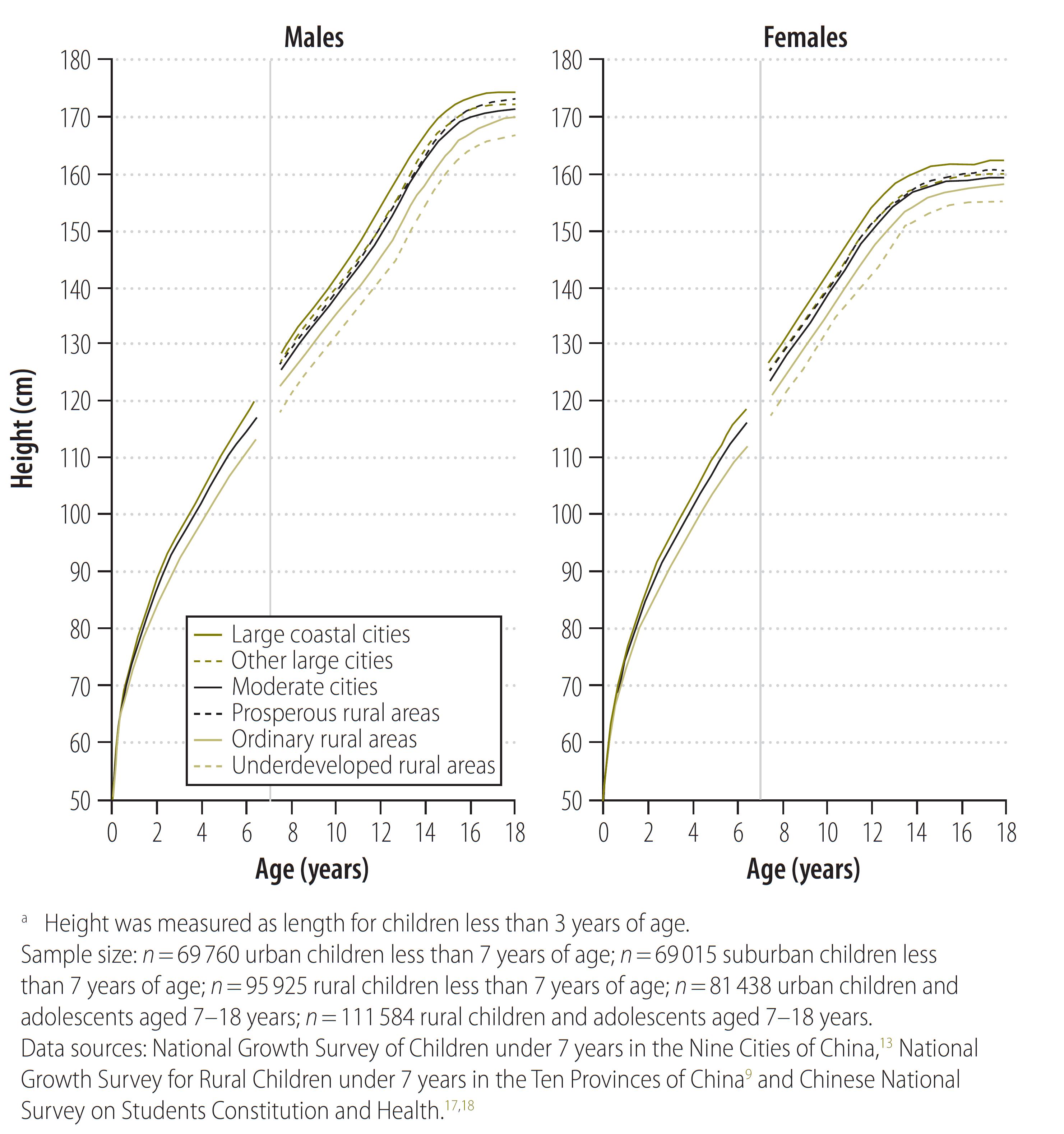 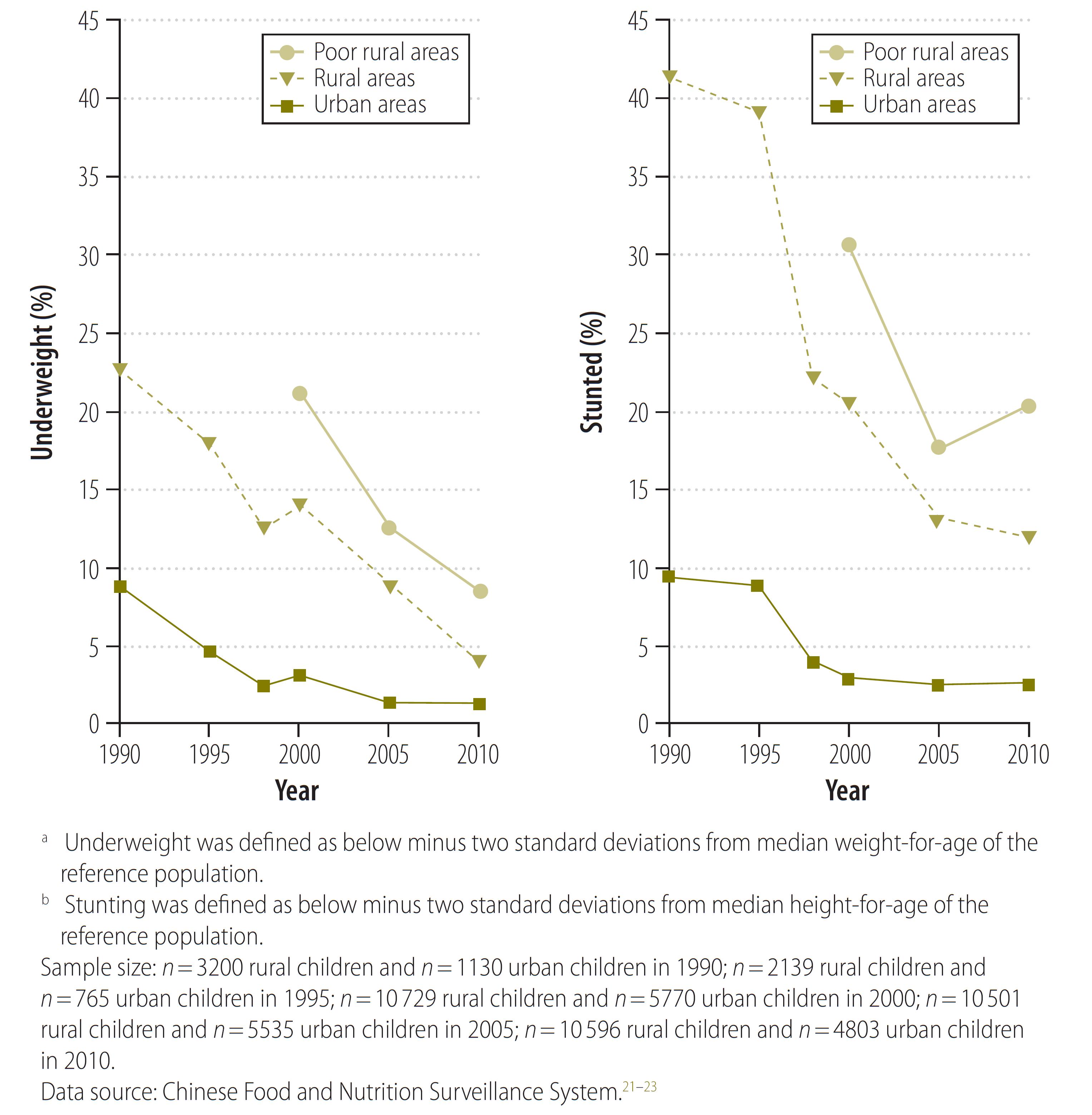 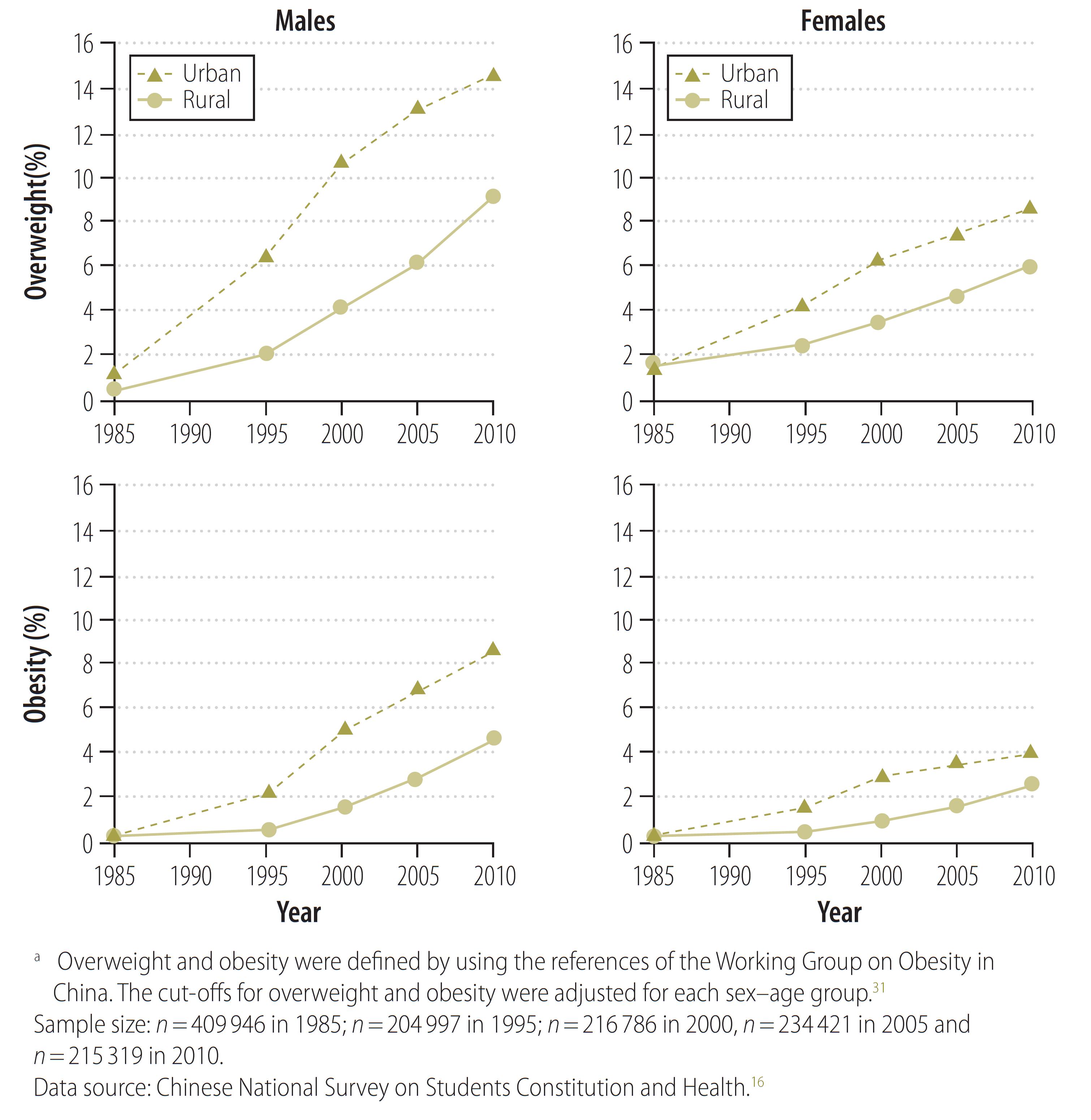 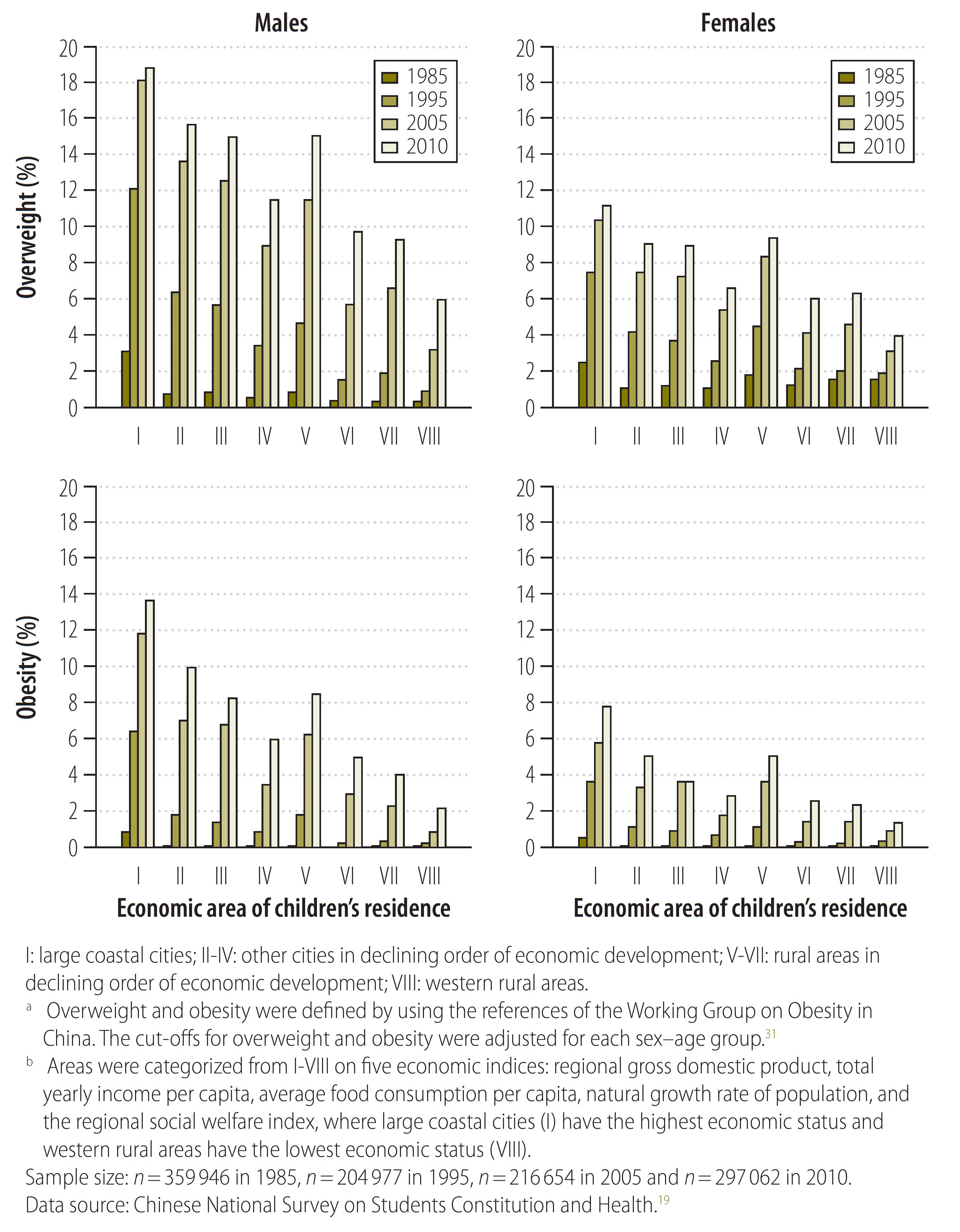 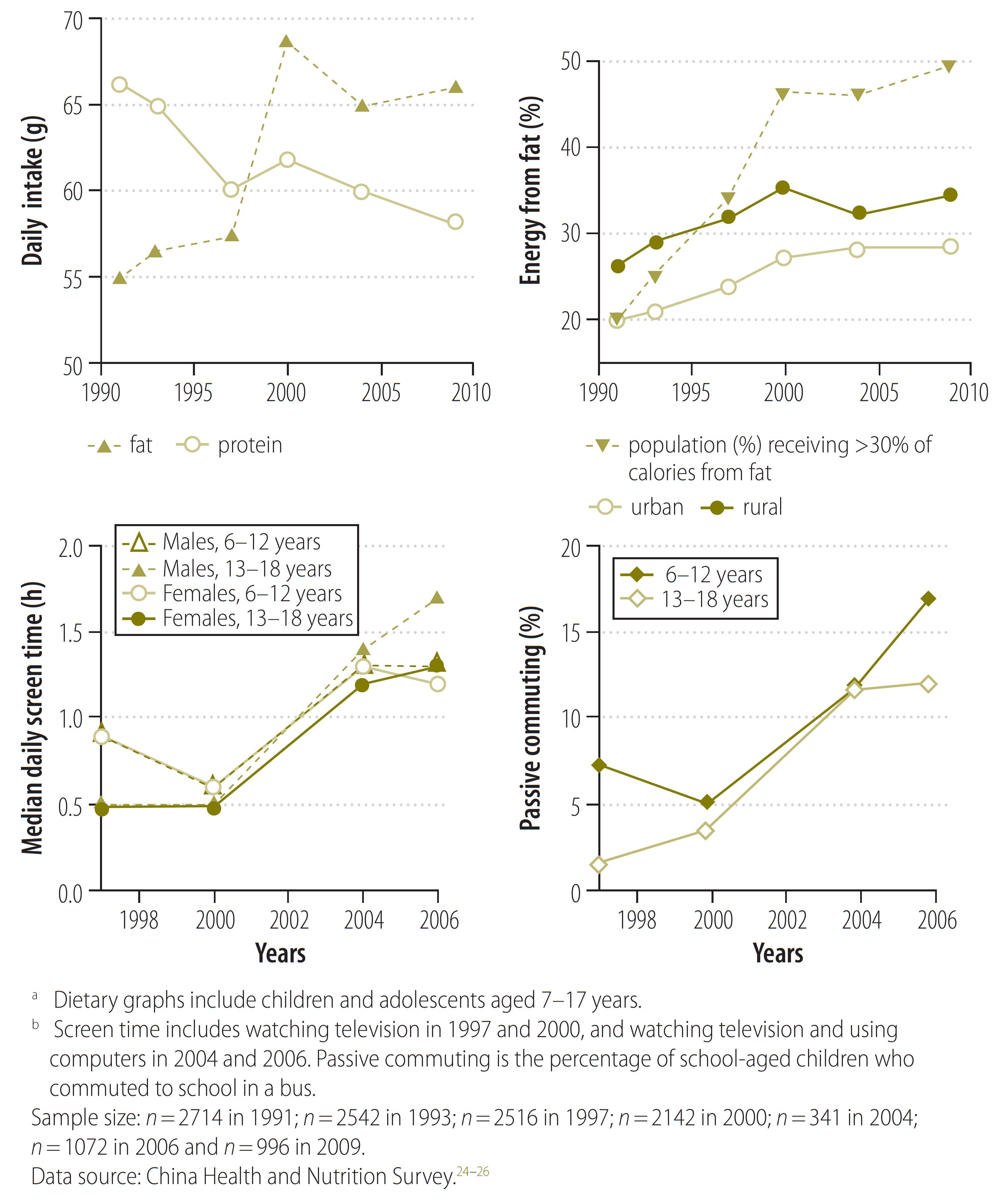 Table 1   Summary of the nationwide surveys of child and adolescent growth and nutrition used to obtain data for studying child growth, China, 1975–2010