Inequality in the characteristics of the institutionalized elderly in the city of Natal, Brazil

The aim of this study was to describe the differences in the profile of elderly residents in non-profit and for-profit Long-Term Residential Institutions for the Elderly (ILPI). We visited 12 ILPIs in the city of Natal, Rio Grande do Norte. Six of them were non-profits housing 260 elderly, and six were for-profit institutions, housing 127 elderly. The unequal characteristics of the elderly in these facilities are based on socioeconomic data and the reason for institutionalization. The data was submitted to Chi-squared or Student’s t, with a significance level of 5%. Illiterate, single, black or brown, individuals with no retirement/pension or healthcare plan, no children and no visitors who purchase something outside the institution with their own money are associated with non-profit ILPIs. When analyzing the reasons for institutionalization, family conflict, abandonment and being homeless were associated with the elderly institutionalized in non-profit ILPIs. The main reason for the elderly institutionalized in for-profit ILPIs was “being ill”. The conditions of the elderly in non-profit ILPIs were poorer, reflecting the social inequality these subjects experienced throughout their lifetime.

As a result, more Long-Term Residential Institutions for the Elderly (ILPI) are being created. This is a special type of socio-health institution that may be non-profit or for-profit. Committing the elderly to this type of facility is associated with the services they offer, in addition to the economic and psychosocial problems that families face in caring for their elderly, especially in view of their vulnerability and reduced functional capability at this stage in life33. Oliveira MPF, Novaes MRCG. Perfil socioeconômico, epidemiológico e farmacoterapêutico de idosos institucionalizados de Brasília, Brasil. Cien Saude Colet 2013; 18(4):1069-1078..

Professionals working at the ILPIs must therefore know how to directly handle the elderly with reduced functional skills, attempting to preserve their quality of life. This requires identifying the differences in the characteristics of the elderly populating residing in non-profit and for-profit ILPIs to help implement care programs for this population, which increasingly needs care due to longer life-spans, loss of independence and autonomy and increase in chronic diseases44. Alencar MA, Bruck NNS, Pereira BC, Câmara TMM, Almeida RDS. Perfil dos idosos residentes em uma instituição de longa permanência. Rev Bras Geriatr Gerontol 2012; 15(4):786-796..

Thus it is fair to state that institutions for the elderly are hybrid in nature: social and healthcare, and therefore demand policies that address both these spheres. This requires developing specific policies to regulate their operation55. Pinto SPLC, Simson ORMV. Instituições de Longa Permanência para Idosos no Brasil: Sumário da Legislação. Rev Bras Geriatr Gerontol 2012; 15(1):169-174..

On October 2008 ILPI regulation was signed, defining the legal, infrastructure, operational, hygiene-sanitary and occupational health requirements for the proper operation of long-term residential care facilities for the elderly in Natal. According to this legislation, the quality of life of the elderly must be safeguarded when they live in this type of shelter66. Natal. Prefeitura Municipal de Natal. Decreto nº 8.553, de 2 de outubro de 2008. Regulamentação do funcionamento de Instituições de Longa permanência destinadas a idosos no Município de Natal. Diário Oficial do Município 2008; 8 out..

It is understood that institutions should offer favorable living conditions to the elderly in all aspects, however due to economic problems this doesn’t always happen. In general. these elderly individuals suffer from a situation of inequality lasting their entire lives. Because of this, the goal of this study was to check the differences in the characteristics of the elderly population living in ILPIs in the city of Natal, RN - both non-profit and for-profit.

This is a cross-sectional study of elderly subjects living and non-profit and for-profit ILPIs as the unit of observation and analysis. This study was submitted to the Federal University of Rio Grande do Norte Research Ethics Committee (REC), and approved.

The sample was made up of elderly men and women aged 60 or over residing in ILPIs in the city of Natal, RN, registered as such with the city health surveillance agency (VISA). We visited twelve long-term care facilities, six of them non-profits housing 260 elderly, and the other six for-profit, housing 127 elderly. This study was performed between June 2012 and November 2013.

Data was collected using a questionnaire based on SABE, the Health, Well-Being and Aging project77. Lebrao ML, Laurenti R. Saúde, bem-estar e envelhecimento: o estudo SABE no Município de São Paulo. Rev Bras Epidemiol 2005; 8(2):127-141. and on the Héredia et al.88. Herédia VBM, Cortelletti IA, Casara MB. Institucionalização do idoso: identidade e realidade. In: Cortelletti IA, Casara MB, Herédia VBM. Idoso asilado, um estudo gerontológico. Caxias do Sul: Educs, Edipucrs; 2004. p. 13-60. study conducted in Caxias do Sul in 2004. The questionnaire was answered by the elderly themselves, so long as they had sufficient cognitive function to do so. Otherwise, the questions were answered by the care-giver or supplemented with data provided by the institution. Interviews to gather data were conducted by interviewers trained and calibrated for this purpose.

To identify inequalities, elderly residents were characterized by age, gender, color/race, marital status, children (yes or no), origin, religion, reason for institutionalization, years of schooling, if they purchased anything outside the institution with their own money, if they have retirement/pension benefits or health insurance or the like, and if they receive visitors.

The questionnaire answers were analyzed using the Statistical Package for the Social Sciences (SPSS) 20.0 program. Furthermore, we used Chi-squared/Fisher’s Exact tests or Student’s t for independent samples to check for any association between the variables used to characterize the elderly and the type of residential facility, with a 95% confidence level.

387 individuals were assessed, with an average age of 81.81 (± 9.04). Most of them - 260 or 67.2% - resided at one of the 6 non-profit facilities, and the remainder – 127 or 32.8% at the 6 for-profit facilities. The majority of the sample was made up of women. Most of the institutionalized subjects in this study were white, single, illiterate, have no health insurance of the equivalent, are retired/have a pension and do not manage their own money.

Table 1 shows the breakdown of the elderly in this study by type of residential facility, and clearly shows significant differences. Data analysis shows that, as a rule, the elderly in non-profit organizations are in the lower end of socioeconomic strata. This was determined based on the fact that the illiterate, single, non-retired/pensioned elderly with no children, no health insurance, and receiving no visitors were associated with non-profit ILPIs.

Thumbnail
Table 1
Absolute and percentage distribution of the independent variables related to living in non-profit and for-profit ILPIs. Natal-RN, Brazil, 2013.

For black and brown subjects, there was a positive association between the variable color/race and the type of facility they are living in. There are 25% fewer whites than blacks at non-profit ILPIs, and 16% fewer white than brown elderly. 27% more of the elderly in non-profit ILPIs reported no children.

Thumbnail
Table 2
Breakdown of the elderly by reason for institutionalization and whether they are in a non-profit or for-profit ILPI. Natal-RN, Brazil, 2013.

The aim of this study was to describe the differences in the profile of elderly residents in non-profit and for-profit Long-Term Residential Institutions for the Elderly (ILPI). In both types of facilities women outnumber men, corroborating the findings in most of the literature reviewed99. Costa EHM, Saintrain MVL, Vieira APGF. Autopercepção da condição de saúde bucal em idosos institucionalizados e não institucionalizados. Cien Saude Colet 2010; 15(6):2925-2930.

Abandonment was not among the main causes for the elderly living in care facilities. However, vulnerabilities are found in family awareness of how to care for the elderly. Given the diminished functional capabilities and independence of this segment, the family transfers responsibility to caregivers, which possibly explains the predominance of “no caregiver” as the main reason for institutionalization.

Regarding color/race and religion, the results reflect the overall characteristics of the Brazilian population, where most people declare themselves to be white and Roman catholic11. Instituto Brasileiro de Geografia e Estatística (IBGE). Censo Demográfico 2010. Rio de Janeiro: IBGE; 2010.. The fact that most of the elderly living in care come from urban areas suggests that those in rural areas have more trouble getting into an ILPI in the state capital, suggesting the need to discuss the supply of this type of service in the interior of the state.

Single elderly and those who have lost their spouse and have no children or close family member socially obligated to provide care are often sent by their more distant relatives to non-profit long-term care facilities for the elderly. In addition, the fact that most of the black or brown elderly live in non-profit ILPIs shows that those who report themselves as such are more likely to have fewer years of schooling and lower socioeconomic status1515. Bastos JF, Peres MA, Peres KG, Dumith SC, Gigante DP. Diferenças socioeconômicas entre autoclassificação e heteroclassificação de cor/raça. Rev Saude Publica 2008; 42(2):324-334..

We found that almost all of the illiterate elderly in the sample live in non-profit facilities, whereas the majority of those with a university degree live in for-profit ILPIs. This reflects a strong association in this country between socioeconomic conditions and completing secondary school, which in turn enables access to higher education. Most individuals completing secondary school belong to the middle or upper classes1616. Osorio RG. Classe, raça e acesso ao ensino superior no Brasil. Cad Pesquisa 2009; 39(138):867-880.. This being the case, the elderly able to cover the costs of a for-profit ILPI had more opportunity to access higher education at the appropriate time in their lives.

In this study all of the elderly receiving no visitors resided in non-profit ILPIs, confirming their unfavorable situation as the absence of visitors is related to abandonment, and may imply in a decline in the individual’s physical or mental health, and is also associated with symptoms of depression2020. Danilow MZ, Moreira ACS, Villela CG, Barra BB, Novaes MRCG, Oliveira MPF. Perfil epidemiológico, sociodemográfico e psicossocial de idosos institucionalizados do Distrito Federal. Comum Ciênc Saúde 2007; 18(1):9-16..

Finally, the more unfavorable conditions were found among the elderly living in non-profit ILPIs. When we look at the reason for institutionalization, the only variable not consistent with this scenario was “being ill”, which was found more often among the elderly in for-profit ILPIs. This leads us to believe that although these families are in a better socioeconomic situation, they would rather institutionalize their elderly because of the services these facilities provide. Looking at the reasons for institutionalizing the elderly in non-profit ILPIs, we found that family members feel no responsibility for caring for the elderly in worse social conditions, as “abandoned by the family”, “no place to live” and “family conflicts” are associated with this type of facility.

In general, the more unfavorable conditions were found among the elderly living in non-profit ILPIs. We found the population of these facilities to be primarily black or brown, single, childless, with few years of schooling, no retirement or healthcare plan and receiving no visitors, reflecting the social inequality these elderly have experienced their entire lives, extending to their later years.

Table 1   Absolute and percentage distribution of the independent variables related to living in non-profit and for-profit ILPIs. Natal-RN, Brazil, 2013. 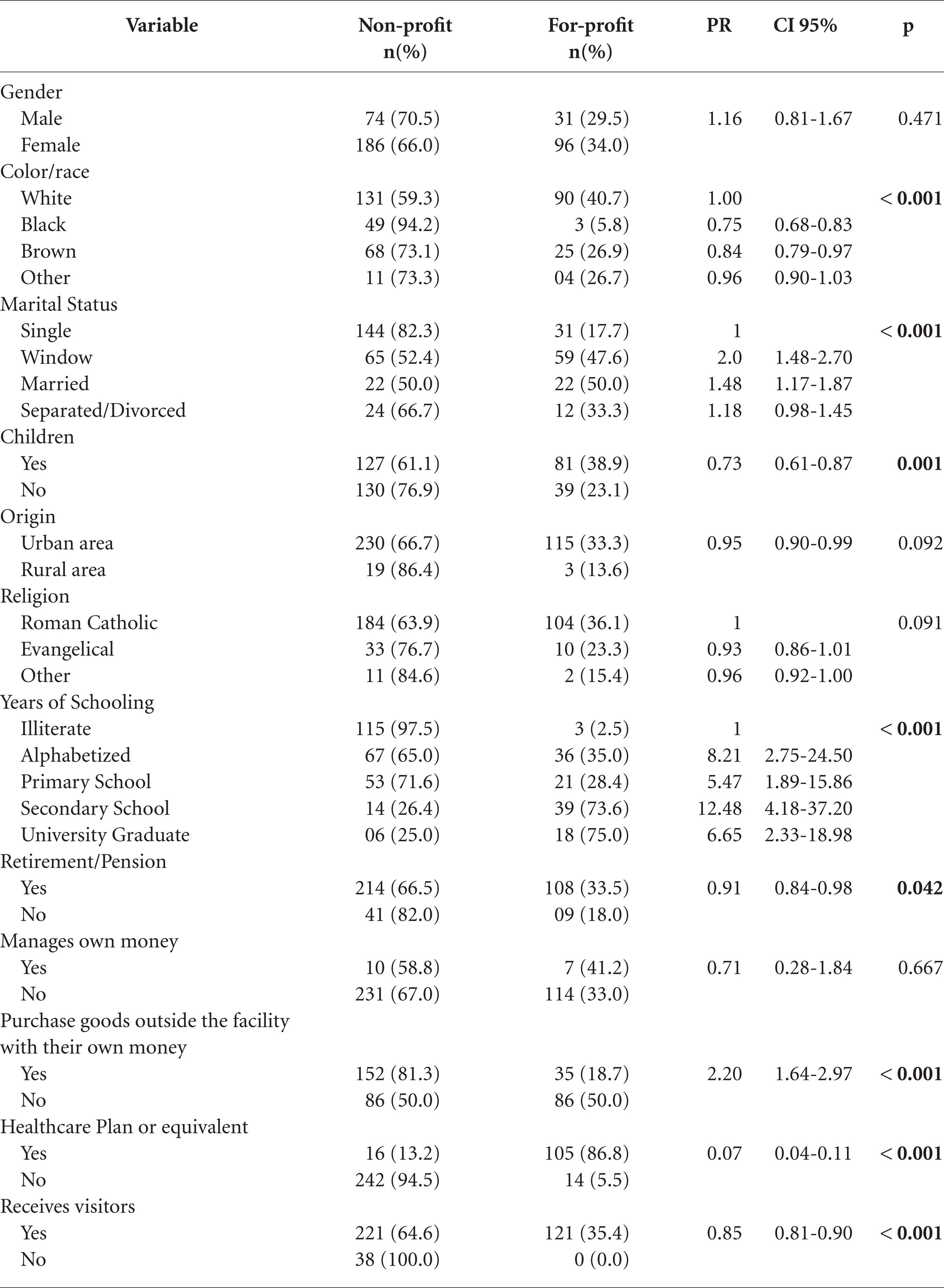 Table 2   Breakdown of the elderly by reason for institutionalization and whether they are in a non-profit or for-profit ILPI. Natal-RN, Brazil, 2013. 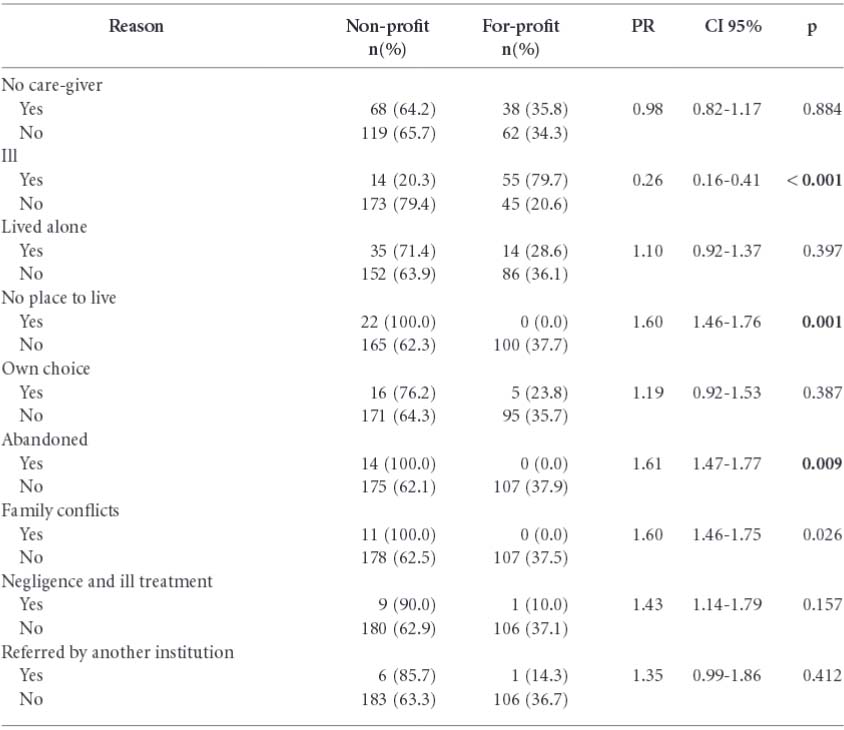