Gender and obesity interaction in quality of life in adults assisted by family doctor program in Niterói, Brazil

Obesity impacts the quality of life (HRQL). Studies about the effects of a possible interaction between gender and body mass are rare. The objective of the present paper is to estimate the biological interaction between gender and obesity on HRQL. This was a cross-sectional study based on data from CAMELIA study with population assisted by the Family Doctor Program of Niteroi visited between June 2006 and December 2007. HRQL was assessed by the SF-36. The exposure categories were: obese women, non-obese women, obese men and non-obese men, the reference category. Obese women showed higher percentages of low overall, physical and mental quality of life with the largest associations in the physical component. The excess risk due to interaction was statistically significant in physical dimension: RERI = 1.97 (0.40-3.52) and RERIa = 1,97 (0.40-1.7). Among the Brazilian population aged 20–64 years, obesity was independently associated with low HRQL. This association differed by gender, being significant for women. The possibility of the combined effect takes greater importance in the context of increasing incidence of obesity globally. Healthcare professionals in primary care settings should pay attention to gender differences in the impact of obesity on HRQL.

In the last decades, the impact on quality of life (QoL) has gained increasing interest as an outcome measure of health status defined as the individual’s perception regarding their position in life according to the cultural context and value systems which they live in, agreeing to their goals, expectations, standards and concerns11. The World Health Organization quality of life assessment (WHOQOL): position paper from the World Health Organization. Soc Sci Med 1995; 41(10):1403-1409.. The concept Health-related quality-of-life (HRQL) adds the issue of disease and health interventions22. Centers for Disease Control and Prevention, National Center for Chronic Disease Prevention and Health Promotion. Measuring Healthy Days. Population Assessment of Health-Related Quality of Life. Division of Adult and Community Health [Internet]. Atlanta-Geogia: CDC; 2000. [acessado 2013 nov 2]. Disponível em: http://www.cdc.gov/hrqol/pdfs/mhd.pdf
http://www.cdc.gov/hrqol/pdfs/mhd.pdf... .

7. Soltoft F, Hammer M, Kragh N. The association of body mass index and health-related quality of life in the general population: data from the 2003 Health Survey of England. Qual Life Res 2009; 18(10):1293-1299.-88. Wee HL, Wu Y, Thumboo J, Lee J, Tai ES. Association of body mass index with Short-Form 36 physical and mental component summary scores in a multiethnic Asian population. Int J Obes (Lond) 2010; 34(6):1034-1043.. However, studies about the effects of a possible interaction between gender and body mass have been little studied99. Choo J, Jeon S, Lee J. Gender differences in health-related quality of life associated with abdominal obesity in a Korean population. BMJ Open 2014; 4:e003954.. As gender differences differs by population groups with diverse sociocultural contexts, it is important to study the interaction between gender and body mass in Brazilian population. The biological interaction refers to an action dependency between two or more factors acting in the same cause, enough to produce an outcome, in other words, a factor may potentiate the action of another1010. Rothman KJ, Greenland S. Modern Epidemiology. 2nd edition. Philadelphia: Lippincott Williams and Wilkins; 1998.,1111. Kalilani L, Atashili J. Measuring additive interaction using odds ratios. Epidemiol Perspect Innov 2006; 3:5.. The aim of this study is to test the hypothesis of biological interaction between gender and body mass on HRQL.

This cross-sectional study is a part of the CAMELIA STUDY (Cardio Metabolic-Renal family) which recruited 1098 subjects were from a public primary care program, the Family Doctor Program in Niteroi, Rio de Janeiro, Brazil1212. de Miranda VA, Cruz Filho RA, de Oliveira TS, Moscavitch SD, Kang HC, Miranda Chagas SV, Costa DM, Vianna Araújo D, Garcia Rosa ML. Racial differences in HbA1c: a cross-sectional analysis of a Brazilian public primary care population. Prim Care Diabetes 2013; 7(2):135-141.. Thirteen FDP units were selected by convenience, covering all administrative areas of the city. Families were enrolled following an initial selection of index cases. To be accepted as an index case, subjects were required to be 67 married to a partner who agreed to participate in the study and have at least one descendant between 12 and 30 who would also enroll.

The protocol was approved by the Ethics Committee of the Medical School of Universidade Federal Fluminense. Informed written consent was obtained from all participants. The participants answered a questionnaire and provided blood and urine samples. The present study included all adults aged 20-64 years, with no history of severe comorbidities such as myocardial infarction, heart failure, cancer and stroke. The individuals who did not answered adequately the SF-36 and those who did not undergo anthropometric measurements were excluded (loss), remaining 605 participants.

The HRQL was evaluated by the SF-36, a general, self-applicable and validated in Brazil questionnaire1515. Ciconelli RM, Ferraz MB, Santos W, Meinão I, Quaresma MR. Tradução para a língua portuguesa e validação do questionário genérico de avaliação de qualidade de vida SF-36. Rev Bras Reumatol 1999; 39(3):143-150.. The outcomes variables were defined as the scores of the SF-36. The physical component summary (PCS) was the sum of the following the domains: physical functioning, role-physical, bodily pain and general health; for the mental component summary (MCS) we used the sum of: role-emotional, mental health, social functioning, and vitality, and the sum of both PCS and MCS we called the general score.

The Normal distribution was not seen in none of the eight domains. As the median of six dimensions, achieved the maximum score and the two remaining reached 85%, we set the cutoff at 25% of the maximum as low scoring on HRQL. To analyze the additive interaction, dummy variables were constructed by exposures of interest: non-obese women (+ -), obese men (- +) and obese women (+ +), taking as reference the group men non obese (- -). Adjusted and unadjusted odds ratios were estimated by logistic models of generalized estimating equations (GEE). For modeling, we included potentially confounding variables that were associated with HRQL in the bivariate analysis (p < 0.2).

We surveyed 605 subjects, 55% women, 72% under 50 years and 22,5% were classified as obese. Associations of low HRQL with gender (women), age (older), physical activity (low), depression, hypertension and HDL (low) were statistically significant (Table 1). The overall prevalence of poor HRQL ranged from 13% among obese men and 40% among obese women. The crude and adjusted OR of low overall HRQL were higher in females, which did not happen with exposure to obesity alone (Table 2).

In multivariate analysis, the percentages of overall scale and MCS decreased, but increased the PCS, in which adjusted difference remained statistically significant. Comparing to the Synergy Index, which represents the excess risk of exposure to risk factors when interaction is present, in relation to risk of exposure when interaction is absent, the rates of total synergy, physical and mental, not reached statistical significance (Table 3).

The present study confirmed the assumption of biological interaction between obesity and sex to low HRQL. The chance of obese women to present lower HRQL, compared to non-obese women and obese men, exceeded the sum of the odds ratios of the other groups. Obese women had the higher OR of low HRQL in the scale as a whole, in the PCS and MCS, followed by thin women and thin men. Obese men had better scores. The worst score of obese women compared to men has been described in numerous studies. Choo et al. found similar results for Korean population99. Choo J, Jeon S, Lee J. Gender differences in health-related quality of life associated with abdominal obesity in a Korean population. BMJ Open 2014; 4:e003954..

In our study, the OR of low scores on the SF-36, indicating low HRQL of obese women was higher in the physical component. The index of bodily pain seems to be larger and more varied among women, responding differently to drugs due to neural and hormonal differences and development between the genders1919. Macintyre S, Hunt K, Sweeting H. Gender differences in health: are things really as simple as they seem? Soc Sci Med 1996; 42(4):617-624.,2121. Berkley KJ, Zalcman SS, Simon VR. Sex and gender differences in pain and inflammation: a rapidly maturing field. Am J Physiol Regul Integr Comp Physiol 2006; 291(2):241-244.. Perhaps, these differences may partly explain the greater reflection on the HRQL in the physical component of the obese woman compared to obese man.

The mechanism underlying the hypothesis of interaction between female sex and obesity to the impact on HRQL may include genetic or biological matter such as body composition - that relates to the variable performance like strength and endurance - and psychological and social variables, how women, unlike men, perceive their physical appearance and are more susceptible to mental suffering.

Some limitations of the study should be highlighted, the sample size may have affected the power of the study, hypothesis tests for additivity has low power when applied to traditional sample sizes, which is reflected in the poor accuracy of the corresponding estimates, as RERI1010. Rothman KJ, Greenland S. Modern Epidemiology. 2nd edition. Philadelphia: Lippincott Williams and Wilkins; 1998.. Even with low precision, the outcome studies of interaction, that points to possible combined effects, biologically plausible, and susceptible to intervention processes for preventing new cases, without prejudice to the population, should be valued.

Although the results were favorable to the hypothesis of biological interaction, the cross-sectional design is limited to causal inference, thus should be interpreted with caution. We also emphasize that we seek to minimize the effect of confounding factors by controlling the variables associated with the exposures and outcomes involved in the analysis. The differences seen in this study cannot be generalized to the population overall, as they are based on a subjective measure that can vary between populations of different cultural, social realities and historical periods.

The results of this study support the hypothesis of biological interaction between sex and obesity on HRQL. This study contributes to public health with the warning that an excess of cases of low HRQL is related to the combination: woman and obesity. The possibility of the combined effect takes greater importance in the current context, in which the incidence of obesity is increasing globally. Healthcare professionals in primary care settings should pay attention to gender differences in the impact of obesity on HRQL.

Table 1   Distribution of demographic, socioeconomic, behavioral and comorbidities variables according the score of SF-36, lesser and greater than or equal to the percentile 25, total SF-36, physical and mental components. Population sample assisted by PMF of Niterói, Rio de Janeiro, Brazil 2006 to 2007 (n = 605).

Table 2   Distribution and prevalence of low HRQL (total, physical and mental) among the groups of effects isolated or combined between women and obesity, Odds Ratio (OR) and adjusted (ORa), confidence interval (CI 95%). Population sample assisted by PMF of Niterói, Rio de Janeiro, Brazil 2006 to 2007 (n = 605). 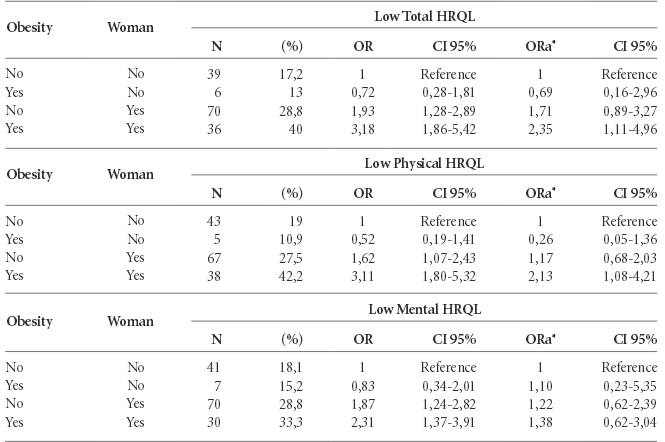