Considering these data, we conduct a study to estimate the survival of patients with penile cancer treated on a universitary, philanthropic and tertiary oncology hospital at a state.

It is a retrospective cohort study. The study population was composed of 108 patients diagnosed with penile cancer treated at Santa Rita de Cássia Hospital (Hospital Santa Rita de Cássia - HSRC)/Women’s Association for the Education and Fight Against Cancer (Associação Feminina de Educação e Combate ao Câncer - Afecc), located in Vitória, Espírito Santo, Brazil, from 1 January 2000 to 31 December 2011. Eight men were excluded from the study because they were followed at HSRC for less than 6 months. The final number of cases analysed was 100. We did not include cases with recurrent disease.

Data were collected from the Tumour Registry of HSRC/Afecc, a tertiary referral centre for cancer treatment, established as a Centre of High Complexity in Oncology (Centro de Alta Complexidade em Oncologia - CACON) by Brazilian Ministry of Health.

The Tumour Registration Form and the medical records of men diagnosed with penile cancer and treated at HSRC were registered on the hospital’s health information system. From these data, we could identify sociodemographic and clinical variables (age range, race/skin colour, educational level, occupation, place of residence, marital status, source of referral, previous diagnosis, staging, presence of lymph node invasion, and metastasis).

Deaths and causes of death were identified via the Mortality Information System (Sistema de Informaçoes sobre Mortalidade - SIM) of Espírito Santo state from 2000 to 2012. Penile cancer was defined as the cause of death for cases registered with diagnostic code ICD C60, according to the 10th edition of the International Classification of Diseases (ICD), approved in 1989 and updated in 2008, must appear as the basic cause of death to be considered as death-specific for penile cancer.

Deaths were verified by cross-checking data from the HSRC treated patient database and SIM database from 2000 to 2012. The patient’s name, date of birth and name of the mother were used as variables to compare databases.

Survival times were calculated in months from the date of diagnosis by histopathology until death by penile cancer (event of interest) or death by other causes (censure). For patients who were alive until the last day of follow-up (January 01, 2000 SIM data there December 31, 2012) were considered censored data, the last visit or medical procedure recorded on the medical record was used as the final date.

Data were organised using Microsoft Office Excel 2007 for Windows. To estimate survival, the Kaplan-Meier method was applied. To compare survival curves, the Log Rank test was used with a 5% significance level. The event of interest was death by penile cancer. The influence of variables was calculated using Cox’s multiple regression model. Statistical analysis was performed with Statistical Package for the Social Sciences (SPSS) version 18.0.

The forward stepwise (likelihood ratio) method was applied to select variables after testing other methods for entering variables into the Cox Regression model because it produced the best results. The forward stepwise method relies on individual variable entry, which allows the verification of the significance of each variable and the elimination of non-significant variables. Any variable having a p-value of 0.20 in the univariate test was selected as a candidate for the Cox multivariate model, and the final significance level was 5%.

This study was performed according to the ethical standards determined by the National Research Ethics Commission (Comissão Nacional de Ética em Pesquisa - CONEP), and the study was submitted and approved, using Plataforma Brasil, by the Ethics in Research Committee of the Espírito Santo Federal State University (Universidade Federal do Espírito Santo – UFES).

The median survival time was 49 months, indicating 50% of the analysed patients died within that time period. Figure 1 presents the cumulative survival curve, calculated for the outcome of death by penile cancer using the Kaplan-Meier method. The mean survival time was 57.79 months [95% Confidence Interval (CI): 46.3 - 69.29].

Table 1 presents a description of survival times according to the independent variables of interest. Figures 2A-D present Kaplan-Meier curves for mean survival times as a function of the statistically significant variables described in Table 1 (occupation, origin, presence of compromised lymph nodes and metastasis).

The log-rank test revealed that the variables race/skin colour, educational level, marital status, source of referral and previous diagnosis were not statistically significant.

Although it is considered a rare cancer, a considerable number of penile cancer cases were observed. The overall survival of the study sample was comparable with the survival of the most advanced cases described in the literature1414. Graafland NM, Verhoeven RHA, Coebergh JWW, Horenblas S. Incidence trends and survival of penile squamous cell carcinoma in the Netherlands. Int J Cancer 2011; 128(2):426-432.,1515. American Cancer Society. Survival rates for penile câncer. EUA. [Acessado 2014 Fev 16]. Disponível em: http://www.cancer.org/cancer/penilecancer/detailedguide/penile-cancer-survival-rates
http://www.cancer.org/cancer/penilecance... . Although the majority of patients enrolled in this study had stage I or II penile cancer, the progression of the disease to poor outcomes in patients with early stage penile cancer treated at HSRC is noteworthy. Another study reported a similar mortality (38%) and a low overall survival rate (38 months)1616. Morrison BF, Hanchard B, Graham RP, Reid ME. Penile cancer in Jamaicans managed at the university hospital of the West Indies. West Indian Med J 2011[citado 2014 Abr 02]; 60(5):525-530. Disponível em: http://caribbean.scielo.org/scielo.php?script=sci_arttext&pid=S0043-31442011000500005&lng=pt.
http://caribbean.scielo.org/scielo.php?s... .

Following multivariate survival analysis, we observed that metastasis was the only variable that remained statistically significant in our study. In a similar analysis, a Dutch study also identified metastasis as a risk factor for death, with an HR of 2.6 (95% CI: 1.3 - 5.4)1313. Hassan E, Carvalhal GF. Câncer de pênis. In: Rhoden EL, organizador. Urologia no consultório. São Paulo: Artmed; 2009. p. 650-662..

After analysing data from the HSRC/Afecc Tumour Registry and medical records, a number of variables related to penile cancer, such as phimosis, smoking and HPV, rarely mentioned or even unreported, were observed, preventing analysis depth of the sample. This is a limitation of retrospective studies, there is not systematic collection of information that could have an effect on prognosis of patients.

Care services to treat these patients with penile cancer must disclose information about this disease, which is not known for much of the population, due to rare incidence and certain prejudice. Should discuss and advising on prevention, risk factors, the importance of early diagnosis, the severity of its evolution and the result of mutilating treatment. Opportunities exist centers of multidisciplinary teams references that allow access and an approach not only the physical but also the mental. Considering the large number of patients that progress to depression and suicide.

A better understanding of penile cancer patients would help to establish more effective public policies for the fight against penile cancer. The proposal to implement a Brazilian National Policy for Men’s Health (Política Nacional de Atenção Integral à Saúde do Homem) aims to improve the quality of men’s health through different actions for health promotion, prevention, care and recovery at the different levels of medical care assistance2323. Brasil. Ministério da Saúde (MS). Política Nacional de Atenção Integral à Saúde do Homem. Brasília: MS; 2008. [acessado 2014 Abr 03]. Disponível em: http://dtr2001.saude.gov.br/sas/PORTARIAS/Port2008/PT-09-CONS.pdf
http://dtr2001.saude.gov.br/sas/PORTARIA... . Guiding the population in personal hygiene care, transmission of sexually transmitted diseases, HPV vaccination, and dangers of tobacco use, making circumcision available to patients with phimosis, orientating men how to identify a suspicious lesion, and providing specialized medical care according to the population needs would represent important measures to reduce the burden of penile cancer. These measures would prevent the emergence of a disease whose psychological consequences may be irreparable and would provide the earliest and most effective treatment available. 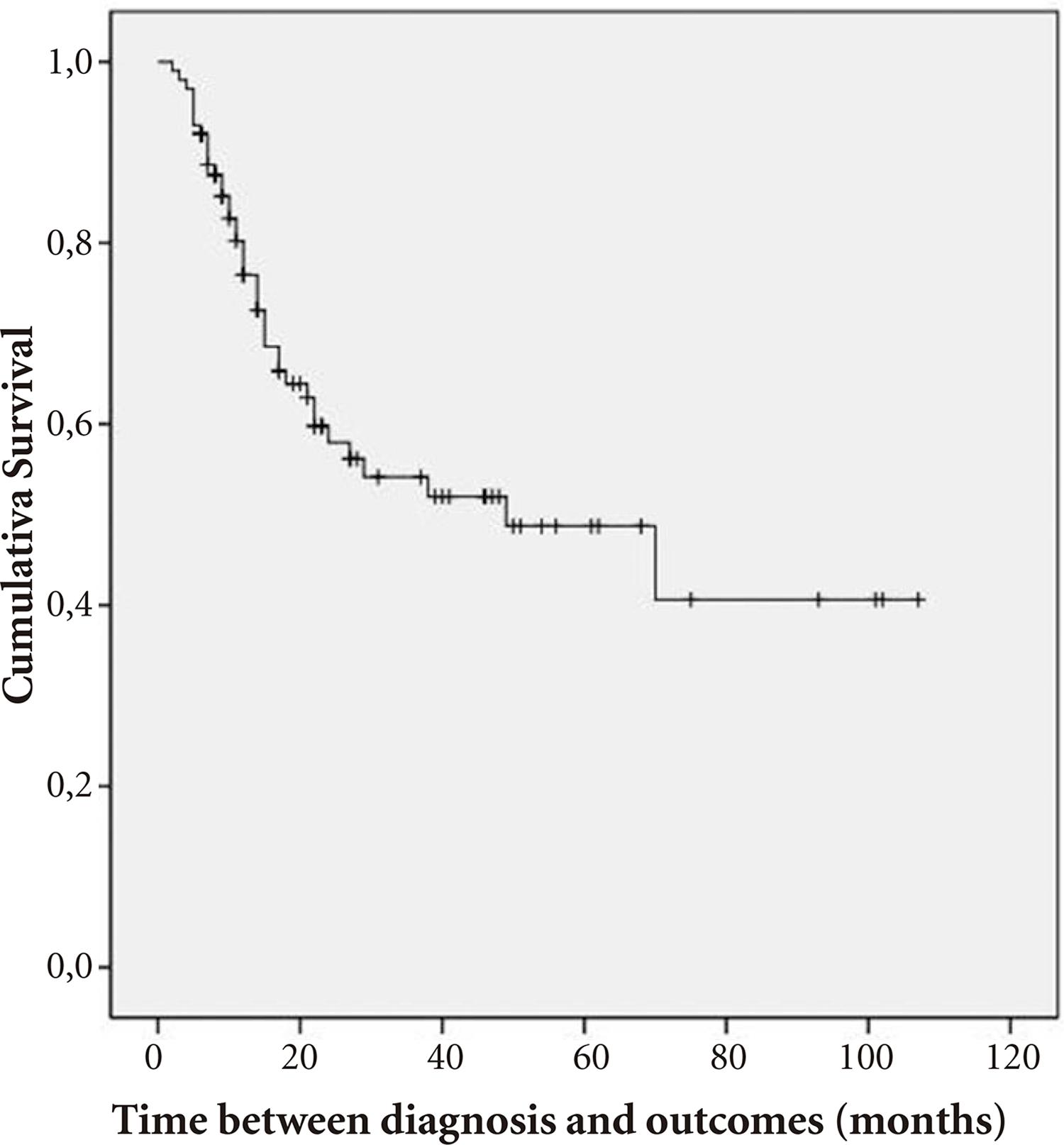 Figure 2   Survival curves of men with penile cancer as a function of the statistically significant variables occupation (2A), origin (2B), presence of compromised lymph nodes (2C) and metastasis (2D). 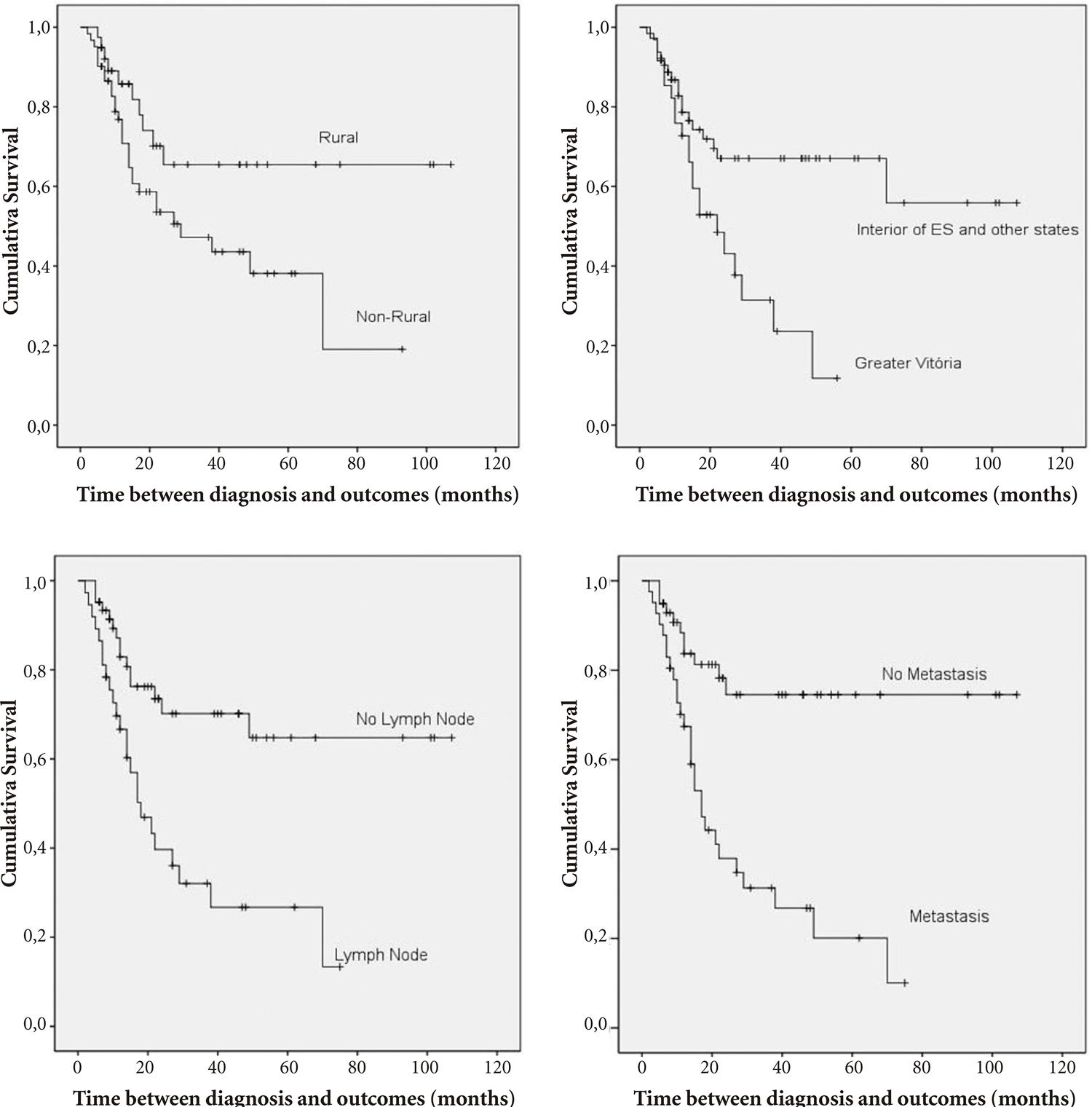