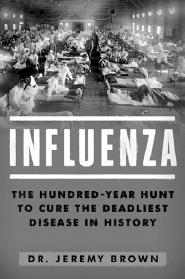 The main themes are: discovery of the virus that caused the 1918 pandemic, vaccines and viral mutations, data collection, the need to forecast epidemics. The book also addresses the pharmaceutical industry lobby - focusing on the Tamiflu case in 2005.

The first chapter - Enemas, blodleting, and whiskey: treating the flu - draws a parallel between the efficiency of the methods at the beginning of the century and that of the current ones, concluding that, despite the advance of modern medicine, the cure for the flu was not found. Chapter 2 - The Jolly rant: a history of the virus - deals with the specificities of viruses - which can become new and unrecognizable to the immune system, challenging vaccine production. Chapter 3 - Something fierce: the Spanish Flu of 1918 - addresses the origin of the name, treatments, mortality, and attempts by scholars to discover the reason for the lethality of the Spanish flu.

The work is deepened in Chapter 4 - Am I gonna die?:round one, two, three and four - with information on the influenza epidemics of more recent years, indicating their specificities, with emphasis on H2N2. The author focuses on the 2009 pandemic, which had a very rapid spread capacity, but Brown emphasizes that the recovery occurred for the majority of those infected without the need for medical treatment. Brown also reports what he considers to be the most lasting effect of the flu pandemic, namely the population confusion: although official documents predicted a dangerous winter and the media reported frequent deaths, the viral outbreak was no more or less lethal than other common colds. There were also accusations that the number of deaths reported was exaggerated. On this point, a journal editor reported that the circulating messages about the high lethality of the 2019 pandemic were associated with the pharmaceutical industry interests so that it could sell its drugs on the market, and that professionals from the World Health Organization were complicit in this. The discomfort was general. For Brown, even with the scientific knowledge accumulation about the flu, inadequacies of preventive public policies responses, in addition to the reaction of the media, are obstacles to the effective virus battle. However, a gap in the book is not dealing with direct and indirect costs arising from the epidemic, since gains in relation to mortality did not mean lower expenditures for the health system in areas where populations were affected by the pandemic of 201944 Nickol ME, Kindrachuk J. A year of terror and a century of reflection: perspectives on the great influenza pandemic of 1918-1919. BMC Infect Dis2019 ; 19(1):117.. Thus, the flu may not have been more deadly, but it caused negative impacts on the populations in terms of their morbidity, disability and health indicators in general.

Chapter 6 - Data, intuition and other weapons of war - reveals the thoughts of the author as an emergency doctor. Brown does not consider it common in emergency care to request tests in case of flu: patient history and symptoms are more important for the diagnosis. For the author the data are not useful to solve outbreaks and immediate epidemics, but for epidemiologies that need to predict patterns of diseases. At this point, there is a lack of clarity on the function and role of epidemiological surveillance, which operates in times of crisis. As reviewers of this book, we consider that this view is a mistake: in his short-sighted logic, Brown does not understand that data from the past can lead to control of future epidemics. At this point, the author’s ideas contradict each other, since Brown himself devotes much of the book to understanding a remote epidemic. Thus, this chapter should be read critically. Beyond that, it is interesting the incursion on the initiatives that tried to predict the flu, such as Google Flu Trends, a subject little explored in scientific articles.

Chapter 7 - Your evening flu forecast - deals with the supposed influenza seasonality. This subject is controversial and Brown is didactic, arguing that calling the disease as seasonal would make the false impression of safety at certain times of the year. In Brazil, authors also go beyond seasonality and discuss the flu in the context of sanitary structure in the country, bringing a comprehensive view of the need for permanent surveillance and articulated response of governments in the various types of flu (seasonal or not)66 Costa LMC, Merchan-Hamann E. Pandemias de influenza e a estrutura sanitária brasileira: breve histórico e caracterização dos cenários. Rev Pan-Amaz Saude 2016; 7(1):11-25..

Chapter 10 - The business of flu - deals with economic aspects related to influenza. It explains how certain sectors benefit from influenza, such as pharmacies and funeral homes, and the pharmaceutical industry itself. However, the flu is unequivocally harmful to society as a whole and the estimated cost of a serious flu outbreak in the United States, for example, would be 20 to 25 billion dollars88 Tempia S, Moyes J, Cohen AL, Walaza S, Edoka I, McMorrow ML, Treurnicht FK, Hellferscee O, Wolter N, von Gottberg A, Nguweneza A, McAnerney JM, Dawood H, Variava E, Cohen C. Health and economic burden of influenza-associated illness in South Africa, 2013-2015. Influenza Other Respir Viruses 2019 ; 13(5):484-495..

In the epilogue, the author suggests that the collective memory of the 1918 epidemic should be recovered, since what causes individuals to remain alert in the prevention of a disease is the ability of the society to understand its impacts, and to evaluate what has been sucessful in the past to be able to deal with the present, projecting the future. At this point of the book, there is constant reference to the past and the future, made by an emergency physician, who deals essentially with the present. Overall, the book reading is challenging, even because the author himself is involved with his conceptions of immediate needs and sometimes gets lost in some arguments. Therefore, the book becomes interesting and should be appreciated lightly and critically.