Over the past decades, different strategies have been adopted in order to attract and retain these professionals in underserved and high need areas33 Araújo E, Maeda A. How to recruit and retain health workers in rural and remote areas in developing countries: A Guidance Note. Washington: HNP; 2013.,55 Wilson NW, Couper ID, Vries ED, Reid S, Fish T, Marais BJ. A critical review of interventions to redress the inequitable distribution of healthcare professionals to rural and remote areas. Rural Remote Health. 2009; 9(2):1060.,66 Dolea C, Stormont L, Braichet J-M. Evaluated strategies to increase attraction and retention of health workers in remote and rural areas. Bull WHO. 2010; 88(5):379-385.. In Brazil, despite great progress towards a more equitable access and utilization of health care77 Mullachery P, Silver D, Macinko J. Changes in health care inequity in Brazil between 2008 and 2013. International J Equity Health. 2016; 15(1):140.

There are two major reasons why the unbalanced distribution of physicians across areas is a concern to policy makers and researchers. First, in countries with system founded on the principles of equality and social justice, there is an issue when part of population has limited access to health care. Second, an extensive literature indicates the link between physician availability, access to medical care and health status1212 Pitblado JR, Pong RW. Geographic Distribution of Physicians In Canada: Reproduced with permission of the Minister of Public Works and Government Services. Sudbury: Centre for Rural and Northern Health Research Laurentian University; 2000.,1313 Basu S, Berkowitz SA, Phillips RL, Bitton A, Landon BE, Phillips RS. Association of Primary Care Physician Supply With Population Mortality in the United States, 2005-2015. JAMA. 2019; 179(4):506-514.. Clearly, these impacts are considerable for primary health care. In general, primary care physicians (PCPs) are more equally distributed than specialists, but maldistribution of PCPs also occurs in many countries1414 Matsumoto M, Inoue K, Farmer J, Inada H, Kajii E. Geographic distribution of primary care physicians in Japan and Britain. Health Place. 2010; 16(1):164-166..

The positive impact of PMM on health indicators has been shown by an increasing number of studies1616 Santos JRR, Santos HG, Dias CMM, Chiavegatto Filho ADP. Assessing the impact of a doctor in remote areas of Brazil. Int J Public Health. 2020; 65(3):267-272.,1717 Fontes LFC, Conceição OC, Jacinto PA. Evaluating the impact of physicians' provision on primary healthcare: Evidence from Brazil's More Doctors Program. Health Economics. 2018; 27(8):1284-1299.. However, there is a lack of evidence of the effect of the program towards a more equal distribution of physician at national level. Some studies have address this topic, but at the regional/local level or in a selected group of municipalities1818 Santos LMP, Oliveira A, Trindade JS, Barreto IC, Palmeira PA, Comes Y, Santos FO, Santos W, Oliveira JPA, Pessoa VM, Shimizu HE. Implementation research: towards universal health coverage with more doctors in Brazil. Bull WHO. 2017; 95(2):103-112.,1919 Nogueira PTA, Bezerra AFB, Leite AFB, Carvalho IMS, Gonçalves RF, Brito-Silva KS. Characteristics of the distribution of doctors in the Mais Medicos (More Doctors) Program in the states of Brazil's Northeast. Cien Saude Colet. 2016; 21(9):2889-2898.. The present study asses the effect of More Doctor Program on the geographic distribution of PCPs and its contribution to a more equal distribution of PCPs in Brazil.

Brazilian strategies to deal with the maldistribution of physicians

The Program for Internalization of the Unified Health System (Programa de Interiorização do Sistema Único de Saúde - PISUS) was created in 1993. The PISUS was a cooperation of the three branches of government targeting municipalities without health services. It had the goal of retaining at least one physician with residence in the selected municipality; besides the installation of a small healthcare center with basic equipment and healthcare team. Due to the lack of political support, the program was extinguished even before it was effectively implemented2020 Maciel Filho R, Branco MAF. Rumo ao Interior: médicos, saúde da família e mercado de trabalho. Rio de Janeiro: Editora Fiocruz; 2008..

The Program for Internalization of Health Work (Programa de Interiorização do Trabalho em Saúde - PITS) emerged in 2001. PITS used financial incentives and professional qualification to encourage physicians and nurses to move to selected municipalities. Initially, it was selected only municipalities with population of up 50 thousand inhabitants, no Family Health Program coverage, high infant mortality rate (80 per 1,000 live births), low indicator of medical consultation and participation in the Active Community or Alvorada Project. The Program selected 151 municipalities. In the second year of the program, some of the eligibility criteria of the municipalities were changed and 216 municipalities were selected. In additional to unfilled vacancies, the program registered the desistance of some professionals and municipalities in a few months. PITS ended in 20042020 Maciel Filho R, Branco MAF. Rumo ao Interior: médicos, saúde da família e mercado de trabalho. Rio de Janeiro: Editora Fiocruz; 2008..

This study investigates the effects of PMM on geographic distribution of primary care physicians and uses two years for comparison purposes, 2012 and 2016 (before and after PMM implementation). The analysis includes data from 5,564 municipalities.

Primary care physician density is defined as the total number of PCPs per 10,000 population in each municipality. The PCP data source is the Information Department of Brazil’s Unified Health System (DATASUS) from the Brazilian Ministry of Health. The TabWin 32 (Tab for Windows) program was used for collect the data. Primary care physicians include physicians from the Family Health Strategy (FHS) and Primary Health Teams (PHT). It was included only PCPs who work in healthcare centers designed to provide primary health care to the population (Centro de Saúde/Unidade Básica de Saúde, Posto de Saúde and Centro de Apoio a Saúde da Família - CASF). Physicians working in hospitals are not included. In Brazil, it is known that physicians can work different number of hours and/or in more than one municipality. So, for a more accurate number of the provision of this service and avoid an overestimation, the total number of PCPs is calculated dividing the total hours worked weekly in the municipality by 40.

The study uses different approaches to analyse the inequality in the distribution of PCPs. First, it was employed spatial data analysis, where the geographic distribution of PCPs and patterns of spatial association (clusters) were displayed. The maps of geographic distribution provide some indicators regarding the inequality that exist across Brazilian municipalities. The cluster maps detect patterns of spatial dependence between neighbouring municipalities. Spatial dependence (or spatial autocorrelation) can be interpreted a systematic pattern in the values recorded in geographic space2525 Anselin L. The Moran scatterplot as an ESDA tool to assess local instability in spatial association. In: Fischer MM, Scholten HJ, Unwin D, editores. Spatial Analytical Perspectives on GIS. London: Taylor & Francis; 1996.,2626 Anselin L. Spatial Econometrics: Methods and Models. Netherlands: Springer; 1998.. To identify local patterns of spatial association, it was calculated the Local Indicator of Spatial Association (LISA). In formal terms, LISA statistic can be expressed as follows2727 Ertur C, Gallo JL. An Exploratory Spatial Data Analysis of European Regional Disparities, 1980-1995. In: Fingleton B, editor. European Regional Growth. Berlin: Springer Verlag; 2003.:

The following equation was estimated to calculate the time trend in the Gini coefficient:

Where Gi is the Gini coefficient for the unit of analysis i and εi denotes the error term. The equation (1) was estimated for Brazil and each state (26 states) and region (5 regions).

Thumbnail
Figure 2
Geographical distribution and changes in the number of primary care physicians in Brazilian municipalities, 2012 and 2016ª.

Thumbnail
Figure 4
Lorenz curves of primary care physicians in 2012 and 2016ª.

Thumbnail
Table 1
Trends in the Gini coefficient for the distribution of primary care physicians per 10,000 population in Brazil between 2012 and 2016a.

The distribution of PCPs has become more equal after PMM implementation in 4 (North, Southeast, Northeast, South) out of 5 regions. In North, Gini coefficient reduced by 23% from 0.300 in 2012 to 0.230 in 2016. North is the region where was identified a large low-low cluster, as showed in Figure 3.

It was identified a statistically significant trend towards a more equal distribution of PCPs in 21 out of 26 states, with Gini coefficient change ranging from -37% to -6%. The distribution of PCPs has become more unequal in 3 states, but only Goiás exhibited a statistically significant trend toward increasing inequality (p<0.05).

Despite substantial improvements in PCP distribution, there is still an expressive difference in the level of equality in physician distribution in 2016, especially across states. São Paulo is the state in which PCPs are most unequally distributed (0.341), while Piauí is the most equal state (0.0093).

This paper addresses the problem of distribution of physicians in the Brazilian municipalities. Since the 70’s, the government has adopted strategies to recruit and retain physicians in underserved areas and regions with shortage of health professionals. In general, these strategies have been targeted towards primary care and focused to ensure the equitable access of health service around the country2020 Maciel Filho R, Branco MAF. Rumo ao Interior: médicos, saúde da família e mercado de trabalho. Rio de Janeiro: Editora Fiocruz; 2008..

It was identified only one study that had applied the Gini coefficient to evaluate inequality trends in the distribution of health workers in Brazil. Sousa et al.3333 Sousa A, Poz MRD, Carvalho CL. Monitoring inequalities in the health workforce: the case study of Brazil 1991-2005. PloS One. 2012; 7(3):e33399. used data of Brazilian Minimum Comparable Areas (MCA) for 1991, 2000 and 2005. The authors found that the Gini for physicians was 0.60 in 1991 and 0.58 in 2000 and 2005. These coefficients are larger than the found in this study. However, they measured the inequalities in the distribution of all physicians, including specialists, which it is much more concentrated than primary care physicians. The ratio of specialists to generalists in Brazil is 1.67, with a significant difference between the regions, for example, the ratio of specialists to generalists is 2.27 in South and 1.06 in North3434 Scheffer M, Cassenote A, Guilloux AGA, Biancarelli A, Miotto BA, Mainardi GM. Demografia Médica no Brasil 2018. São Paulo: FMUSP, CFM, Cremesp; 2018..

In conclusion, findings in this study evidence that the implementation of PMM has contributed to reduce inequalities in the distribution of PCPs in Brazil. This experience shows the relevance of policies oriented at promoting a more equal distribution of physicians, especially in a context with notable disparities in access to healthcare. However, although the recent increase in the number of PCPs has led to systemic changes, there is still substantial difference in the level of equality in PCP distribution across geographic regions.

Thumbnail
Figure 2
Geographical distribution and changes in the number of primary care physicians in Brazilian municipalities, 2012 and 2016ª.

Thumbnail
Figure 4
Lorenz curves of primary care physicians in 2012 and 2016ª.

Thumbnail
Table 1
Trends in the Gini coefficient for the distribution of primary care physicians per 10,000 population in Brazil between 2012 and 2016a.
Thumbnail
(1)
Thumbnail
(1)

Figure 1   Kernel density plots of primary care physicians in Brazilian municipalities in 2012 and 2016ª. 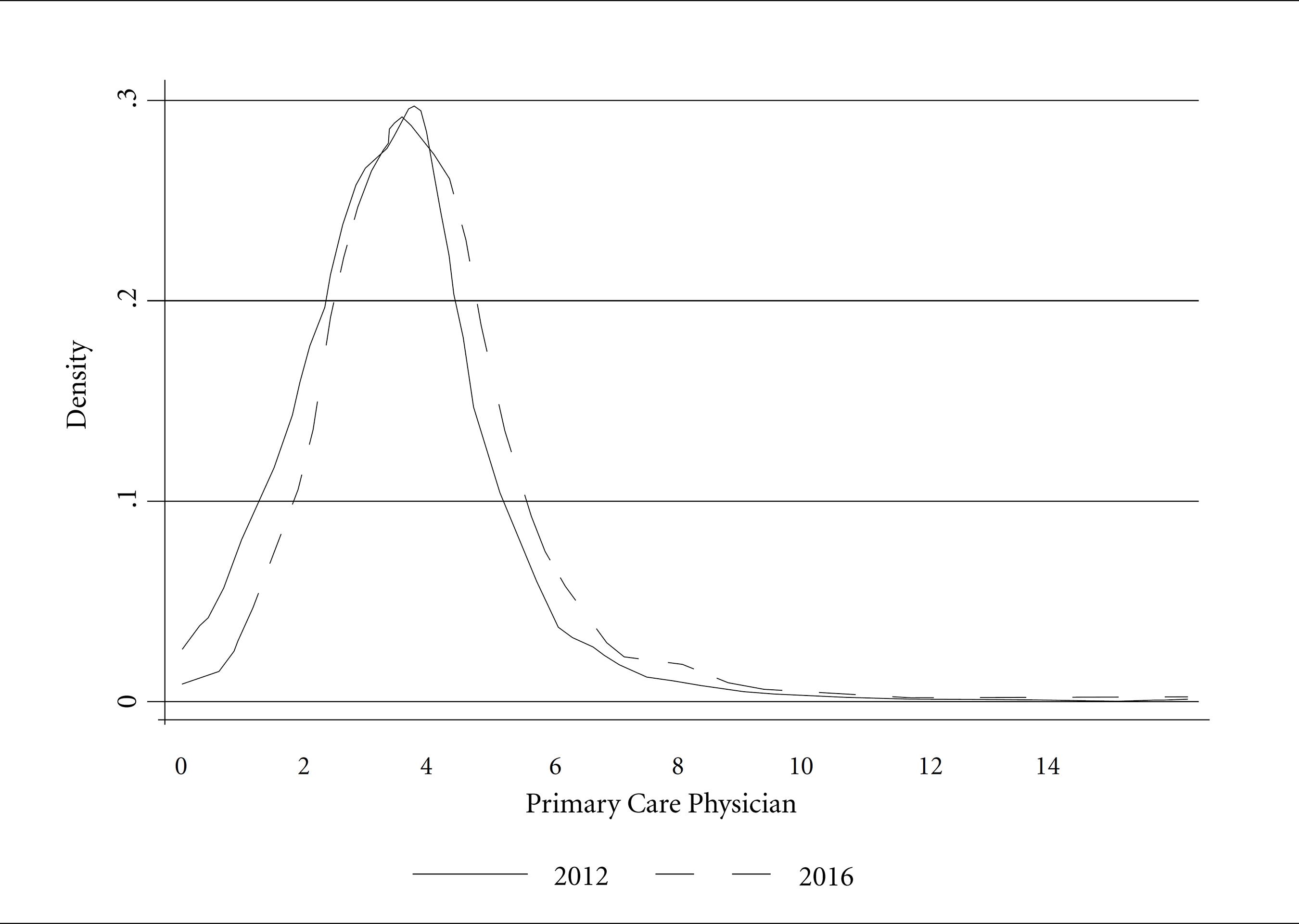 Figure 2   Geographical distribution and changes in the number of primary care physicians in Brazilian municipalities, 2012 and 2016ª. 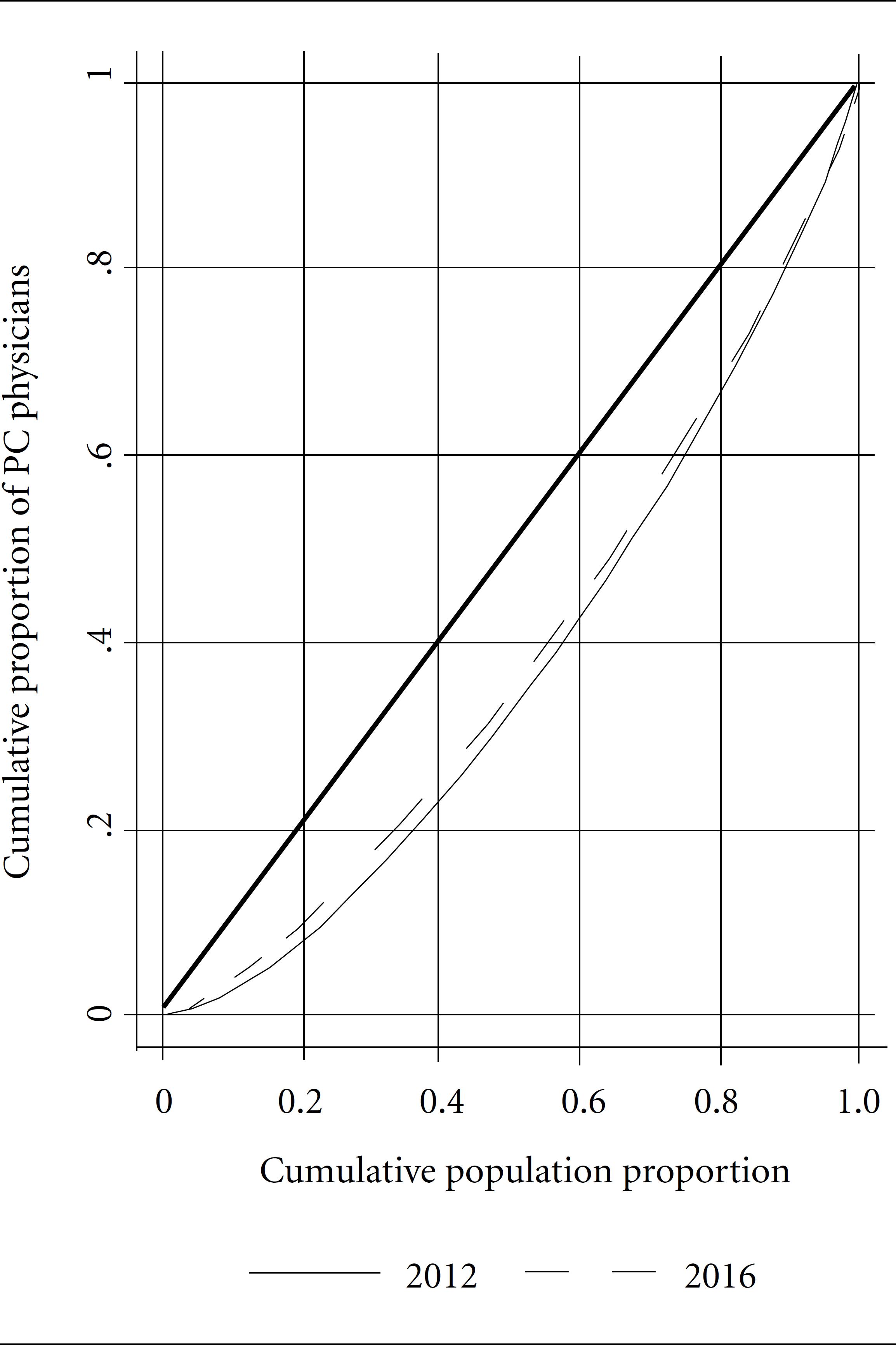 Table 1   Trends in the Gini coefficient for the distribution of primary care physicians per 10,000 population in Brazil between 2012 and 2016a.