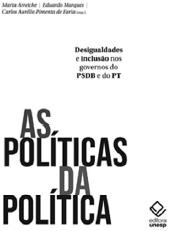 The collection As Políticas da Política: desigualdades e inclusão nos Governos do PSDB e do PT11 Arretche M, Marques E, Faria CAP. As Políticas da Política: desigualdade e inclusão nos governos do PSDB e do PT. São Paulo: Editora Unesp; 2019. (The Policies of Politics: inequality and inclusion in the PSDB and PT Governments), organized by Marta Arretche, Eduardo Marques and Carlos Aurélio P. de Faria, offers a benchmark for the understanding of federal public policies produced and implemented since the 1988 Federal Constitution (FC, 1988). In addition to the thought-provoking sections of Introduction and Final Considerations, the collection includes sixteen chapters by authors linked to the National Association of Postgraduate Studies and Research in Social Sciences (ANPOCS) and the Brazilian Association of Political Science (ABCP). The health policy receives great prominence in the publication, making it important for students, professionals and collective health researchers.

The publication promotes a non-trivial challenge to the dominant approaches regarding the Federal Executive power role in the 1990s and 2000s in the social and health area. Especially regarding publications in the collective health field, the polarization thesis between the agendas of FHC’s and Lula’s administrations for health policy is quite widespread. The almost consensus in the field, the statement that the action of the federal executive power during FHC’s government was completely subordinated to the imperative of the policy of economic stabilization and health expenditure containment, did not favor resource redistribution in favor of inequality reduction22 Viana ALD, Lima LD, Oliveira RG. Descentralização e federalismo: a política de saúde em novo contexto - lições do caso brasileiro. Cien Saude Colet 2002; 7(3):493-507.. The emergence of Lula’s government, conversely, would have substantially broken this orientation, inaugurating an innovative and unique cycle due to social inclusion public policies and health conditioning actions33 Menicucci TMG. A política de saúde no governo Lula. Saude Soc 2011; 20(2):522-532..

These theses are still a by-product of the ruthless electoral competition between the PSDB and PT parties, which affected the narratives in the Social Science and Public Health fields on government policies. In contrast, Arretche et al. argue that the social inequality reduction trajectory begins with the FC in 1988, resulting from the inclusive democratic transition in the New Republic (1985-1990). Therefore, the inequality reduction trajectory was a direct result of the two presidential administrations by PSDB and the four PT administrations. As of 2016, under Temer’s government, public policies aimed at promoting a more inclusive society started being neglected. By focusing on the Federal Executive initiative analysis between 1995 and 2015, the authors identify two exercise periods by PSDB and PT of what they call “durable political authority” – which resulted from electoral victories, control of Executive positions and the successful imposition of the narrative on the legitimacy of their respective governments’ agendas.

The first period (1995-2002) occurred under the PSDB presidency terms, when the Federal Executive agenda was centered on controlling inflation and stabilizing the currency. Notwithstanding, policy reforms inherited from the military government and the social pact implementation advocated by the FC in 1988 were also prioritized, albeit to a lesser extent in some areas.

The second period, which corresponded to PT presidential terms (2003-2015), brought to the center of the agenda the fight against poverty and inequality, and the expansion of the provision of goods and services for the disadvantaged population. Still, the macroeconomic stabilization guidelines were not abandoned in Lula’s first two terms. However, according to the authors, during Dilma Rousseff’s government, the fiscal stability agenda was progressively run over by continued attempts to extend, through public spending, the economic growth period experienced during Lula’s administrations (2003-2010).

In this context, the authors claim that after achieving the federal government, PT received the policies built under the governments by PSDB as legacy. Party differences in relation to PSDB would authorize expecting a complete review of previous policies. However, PT adopted incremental and imitative strategies to produce changes and expand policies. Despite the programmatic divergences, the strategies adopted by PT did not consist of radical ruptures regarding the legacy of previous policies, particularly those adopted under PSDB governments. The implementation of strategies during PT governments involved endogenous changes by incorporating new layers of legislation into pre-existing systems, by replicating the institutional characteristics of a successful federative agreement system and by promoting “showcases” for the governmental agenda priority subjects. For the authors, the assembling of the national health and education systems would characterize the PSDB governments in the social area. The intensification of the ambitions to rescue the social debt through incremental, emulative interventions and the promotion of institutional visibility gave shape to PT governments.

In this sense, the book shows the two PSDB presidency terms took the first steps towards converting the provisions of the 1988 FC into concrete policies by instituting the Unified Health System (SUS) and the incentives for the subnational entities’ adherence to health service decentralization under the Ministry of Health regulation. This argument invites the rescue of the institutional construction effort of sectoral health policies, such as mental health and the local production of medications, usually attributed to civil society pressure.

The book discusses the creation of the Cash Transfer Program by PT, which promoted the massification and unification of fragmented programs created under FHC’s government. According to the authors, PT broadened the scope of actions to promote access to medications and expanded priority federal interventions in the educational policy beyond elementary education, encompassing child, secondary, technical and higher education. The creation of the Ministry of Cities by PT was also an attempt to expand the scope and scale of urban and housing policies.

The publication calls attention to the expansion, by PT governments, of assistance policies, which included a comprehensive strategy for the provision of services to vulnerable populations, complementary to income transfer. Important milestones also discussed in the collection were the creation of the Special Secretariat for Women’s Policies and the Special Secretariat for the Promotion of Racial Equality, linked to the Presidency of the Republic in the PT administration. The initiatives to expand the Federal Executive power intervention in strategic areas were accompanied by the strengthening of civil society participation in federal extra-parliamentary arenas (Councils and Congresses).

The book also contemplates the reader with well-developed texts on the agenda of the two political parties regarding electoral competition, ideology and social protection, income redistribution, tax policy, federal budget and public administration organization. As an epistemic community publication, it is understandable that the social security and basic sanitation areas were addressed, because they are not in the researchers’ agenda. Similarly, the collection does not deal extensively with the income transfer policy for the elderly and people with disabilities under extreme poverty conditions within the scope of the Continued Installment Benefit. Moreover, for a reader who is not familiar with the cleavages and coalitions of party forces in the national scenario, it is also difficult to understand the cause of the absence of cooperation between PSDB and PT in the exercise of the federal government, despite the convergences in substantive policies indicated in the studies. These are issues that may deserve specific treatment in a possible and desirable future edition. There is no doubt, however, that the publication rigorously identifies and analyzes the main public policy issues subordinated to the Brazilian Federal Executive power’s decision-making freedom until the 2016 impeachment. By shedding light on the convergent performance of PT and PSDB, the authors warn about the party system capacity to promote or veto decisions to expand public policies and reduce inequality.

The intensity of the collapse of social security, labor protection laws and the federal health pact promoted by the management in the Federal Executive power by Michel Temer (2016-2018) - and maintained and deepened by the rise of Bolsonaro government in 2019 - certainly influenced the authors’ perception of the mitigated polarization between the PSDB and PT governments in the development of national policies. The objective and concise chapter format makes reading on subjects that are often arid - and of apparent interest only to specialists - extremely pleasant. I consider the publication an essential reading for public health readers interested in the development of public policies to reduce social inequality in the Brazilian democratic experience.