Factors associated with perinatal mortality in a Brazilian Northeastern capital

This study investigated factors associated with perinatal mortality in São Luís, Maranhão, Northeastern Brazil. Data on perinatal mortality were obtained from the BRISA birth cohort and from the Mortality Information System, including records of 5,236 births, 70 of which referred to fetal deaths and 36 to early neonatal deaths. Factors associated with mortality were investigated using a hierarchical logistic regression model, resulting in a perinatal mortality coefficient equal to 20.2 per thousand births. Mothers with low education level and without a partner were associated with an increased risk of perinatal death. Moreover, children of mothers who did not have at least six antenatal appointments and with multiple pregnancies (OR= 9.15; 95%CI:4.08-20.53) were more likely to have perinatal death. Perinatal death was also associated with the presence of congenital malformations (OR= 4.13; 95%CI:1.23-13.82), preterm birth (OR= 3.36; 95%CI:1.56-7.22), and low birth weight (OR=11.87; 95%CI:5.46-25.82). In turn, families headed by other family members (OR= 0.29; 95%CI: 0.12 - 0.67) comprised a protective factor for such condition. Thus, the results indicate an association between perinatal mortality and social vulnerability, non-compliance with the recommended number of prenatal appointments, congenital malformations, preterm birth, and low birthweight.

Perinatal mortality comprises the death of a child during pregnancy (fetal mortality) or up to seven days after birth (early neonatal mortality). Fighting perinatal mortality has been a major challenge for the care of pregnant women and their children worldwide, especially in the middle- and low-income countries11 World Health Organization (WHO). Maternal and perinatal health. Geneva: WHO; 2013. [cited 2020 maio 6]. Available from: https://www.who.int/maternal_child_adolescent/topics/maternal/maternal_perinatal/en/.

This is a cross-sectional study, part of a population-based cohort initiated in 2010 entitled “Fatores etiológicos do nascimento pré-termo e consequências dos fatores perinatais na saúde da criança: coorte de nascimento em duas cidades brasileiras” (Etiological factors of preterm births and consequences of perinatal factors on children’s health: a birth cohort from two Brazilian cities) - BRISA, which analyzes births in São Luís, in the state of Maranhão, and Ribeirão Preto, in the state of São Paulo, Brazil. This study aims to evaluate the perinatal deaths in São Luís identified in the birth cohort.

São Luís is the capital city of the state of Maranhão, inhabited by 1.014.837 citizens in 2010. It is in the northeastern region of Brazil, one of the poorest in the country. Its human development index (HDI) is 0.768, 14th among Brazilian capitals, behind all southern, southeastern, and midwestern capitals of the country1313 Programa das Nações Unidas para o Desenvolvimento (PNUD). Perfil - São Luís, MA. Atlas do Desenvolvimento Humano no Brasil. Brasília: PNUD; 2010. [acessado 2020 maio 7]. Disponível em: http://www.atlasbrasil.org.br/2013/pt/perfil_m/sao-luis_ma.

The São Luís birth cohort was conducted from January 1 to December 31, 2010, and included births in both public and private services, whose institutions performed at least 100 deliveries per year. In 2010, 98% of deliveries occurred in hospitals; and only 3.3% of births in the city were excluded from this study. Our sample was systematically stratified by maternity, proportional to the number of deliveries performed. Each surveyed hospital had an initial causal number (drawn from 1 to 3) with a sampling interval of three, i.e., one in three women were interviewed. An interview and birth control form was prepared in which deliveries were registered chronologically and included live and dead newborns. There was a 4.6% loss due to refusals by mothers to participate, or early discharge, resulting in a final sample of 5,236 births1414 Silva AAM, Batista RFL, Simões VMF, Thomaz EBAF, Ribeiro CCC, Lamy-Filho F, Lamy ZC, Brito e Alves MTSS, Loureiro FHF, Cardoso VC, Bettiol H, Barbieri MA. Changes in perinatal health in two birth cohorts (1997/1998 and 2010) in São Luís, Maranhão State, Brazil. Cad Saude Publica 2015; 31(7):1437-1450..

Only newborns whose mothers lived in São Luís in the last three months were included in the sample. In 2010, SINASC (the Information System on Live Births) registered 17,544 live and dead births in São Luís (by place of residence). Thus, our final cohort sample accounted for 29.8% of all deliveries in the city.

Interviews were conducted in the first 24 hours after delivery, based on two standardized questionnaires on the pregnancy, mother, and newborn. Birth weight was obtained from maternal medical records. Gestational age was collected from maternal reports of their last menstrual period and their medical records. Both sources were compared, and mothers were prioritized in case of discrepancies. All questionnaires were applied by trained professionals after the informed consent form was signed.

The dependent variable was perinatal death, defined as fetal or neonatal deaths occurring between 22 weeks of gestation and less than seven days of postnatal life11 World Health Organization (WHO). Maternal and perinatal health. Geneva: WHO; 2013. [cited 2020 maio 6]. Available from: https://www.who.int/maternal_child_adolescent/topics/maternal/maternal_perinatal/en/. These were identified in the BRISA cohort and confirmed by the 2010 Mortality Information System (SIM). To detect early neonatal mortality, the BRISA and SIM databases were cross-referenced. The Maranhão State Health Department provided the latter upon our formal request. Linkage was used via the Data Link software. To identify perinatal deaths, the information was filtered for age (code < 400) and São Luís (code 211130). After filtering, the data was used to cross-reference the databases (mothers’ names, newborns’ sex, dates of birth, and birth weight). Subsequently, the software generated a table with possible links to be evaluated. To identify stillbirths, only the age was modified in the filter. Type of death = 1 was reported; the code for fetal deaths in death certificates. Cross-referencing and verification followed the same procedure as that for early neonatal deaths.

Variables were divided into three levels of a hierarchical theoretical model (Figure 1), aiming to prioritize the theoretical plausibility of the complex interrelations between variables and not only the statistical associations among them. Variables were interpreted at their levels, rather than at later ones, to prevent underestimating their effect due to the presence of mediators1515 Victora CG, Huttly SR, Fuchs SC, Olinto MTA. The role of conceptual frameworks in epidemiological analysis: A hierarchical approach. Int J Epidemiol 1997; 26(1):224-227.. In our hierarchical model, outcomes were affected by newborns’ biological characteristics (proximal level), which, in turn, were influenced by maternal and reproductive factors (intermediate level), impacted by socioeconomic and demographic variables (distal level).

Thumbnail
Figure 1
Hierarchical model for the analysis of perinatal mortality.

Socioeconomic and demographic data were included in level 1: newborns’ sex, maternal education (0-4 years, 5-8 years, 9-11 years, > 12 years), family income in Reais (divided into tertiles - high, medium, and low), mothers’ marital status (with or without a partner), the head of the family (i.e., the one with the highest income: mother, partner, or other), and ethnicity (white or other). The recorded ethnicity was self-reported. Women who were married or living in consensual unions were considered with a partner, whereas those who reported being single, divorced, or widowed, without a partner.

Maternal and reproductive characteristics were included in Level 2 as intermediate variables: smoking during pregnancy (yes or no), maternal age (< 20 years, 20-34 years, and ≥ 35 years), parity (1 delivery, 2-4 deliveries, or ≥ 5 deliveries), previous miscarriages (yes or no), previous preterm births (yes or no), attended prenatal consultations (≥ 6 or < 6), type of delivery (vaginal or cesarean), pregnancy type (single or multiple) and hospital where the delivery occurred (public or private).

For the statistical analysis, the SPSS 14.0 software was used. After categorizing the variables of interest, data were described via relative and absolute frequencies. Two models were adjusted to associate independent variables with perinatal deaths: a simple logistic regression, and subsequently, a hierarchical one. A 5% significance level was adopted.

The multiple logistic regression analysis analyzed the factors associated with perinatal mortality, with variables inserted in levels following the hierarchical theoretical model. Variables showing a p-value < 0.1 in their level were included in the next level. This strategy was used to verify which variables in the theoretical model were potential mortality predictors since spurious associations may be made, and true associations, diluted by the many variables in the multiple model, leading to imprecise confidence intervals1616 Ranganathan P, Pramesh CS, Aggarwal R. Common pitfalls in statistical analysis: Logistic regression. Perspect Clin Res 2017; 8(3):148-151.. The clinical and scientific plausibility of the associations found was considered in all stages. The effect of each variable on the outcome was only evaluated at its level for those variables showing a p-value < 0.05.

This study met the fundamental requirements of Resolution No. 196/96 and its complementary ones of the National Health Council, being approved by the Research Ethics Committee in the University Hospital at the Universidade Federal do Maranhão under protocol no. 4771/2008-30.

The perinatal mortality rate in São Luís was 20.2/1000 births, associated with mothers with low educational attainment, heading families, without a partner, who attended less than six prenatal consultations whose children had either congenital malformations, preterm births, or low birth weights.

This study’s strengths are data from a large, systematic, population-based birth cohort providing information on many variables that could be risk factors for perinatal mortality. As a limitation, we cite the lack of information on 24 perinatal deaths recorded in the SIM database. Moreover, since mothers reported most of the information obtained, there might be a memory bias. The exclusion of maternities with less than 100 births per year from the sample may have led to the underreporting of perinatal deaths. However, we believe this effect is minimal since only 3.3% of deliveries in 2010 in São Luís occurred in these maternities. Our results indicate risk factors for perinatal mortality, one of the most resilient infant mortality indicators. Although the literature reports reduced rates in Brazil and São Luís, we found that the perinatal mortality rate in the city is higher than that of other cities in the country and even higher when compared with the rates in high-income countries. Knowing the factors associated with this indicator may guide public policies seeking more effective actions to reduce perinatal mortality.

We highlight the importance of improving socioeconomic factors (which require structural changes in human and social development), prenatal care, and characteristics of pregnancies and newborns, such as multiple pregnancies, congenital malformations, preterm births, and low birth weight. Therefore, the minimum schedule of prenatal visits must be monitored and be of sufficient quality to ensure early detection of gestational morbidities and congenital malformations. Adequate prenatal follow-ups may intervene in behavioral risk factors, infection control, and maternal morbidities, helping to reduce adverse outcome rates, such as preterm births and low birth weight. Moreover, we must reinforce the need for rational medical interventions to avoid iatrogenic prematurity.

Figure 1   Hierarchical model for the analysis of perinatal mortality. 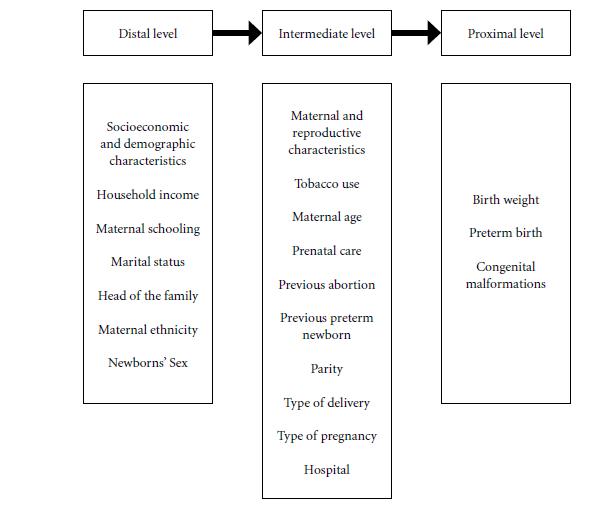