Health Equity: A Solutions-Focused Approach is a book written by K. Bryant Smalley, Jacob C. Warren, and M. Isabel Fernández11 Smalley KB, Warren JC, Fernandez MI, editors. Health Equity: A Solutions-focused Approach. Berlin: Springer Publishing Company; 2020.. Its purpose is to unmask the hidden fights that minority groups and marginalized communities have struggled with regarding health equity and social justice. In addition, it is a homage to those who have fought for recognition, respect, and equality, neglected in the scientific literature. Finally, the authors acknowledge the few and deeply navigate through the origins, demographics, and health disparities they face and come up with alternatives, models, and solutions to each community to decrease health disparities.

The book is structured into three sections: “Introduction and Overview”, “Population Perspectives on Health Equity”, and “The Path Forward”.

The first section, “Introduction and Overview”, describes the concepts of equality, equity, and justice. Furthermore, it identifies how racism, prejudice, and discrimination affect different racial/ethnic groups in the health department. A big emphasis is made on Intersectionality Theory and how it impacts health equity and Minority Stress Theory, which explains the higher rates of health risk behaviors in these populations. It also suggests a correlation between socioeconomic belonging and privilege, some of our culture’s darkest and non-talked-about aspects.

The race is a social construct that categorizes groups based on ideologies of superiority and inferiority related to phenotype. Racism = racial prejudice + power. It also contradicts itself in some ways; for example, Arabs and Muslims are racially considered non-White but are classified under White in the U.S. Census. Racism shapes health outcomes, particularly through stress, racial residential segregation, and immigration policy. Some of the best strategies to address racism and health are psychoeducation, validation, critical consciousness, and examination of privilege and racial attitudes. According to the Socio-Ecological Model, there is a need for an engagement at all levels, especially to turn around health-associated racial disparities.

The second section talks about specific populations and factors intervening in the quality of health services. Here is a summary of the main points per population:

- Health Equity in U.S. Latinx Populations: largest foreign-born group in the U.S.; less education; economic disadvantages; racism and perceived discrimination; major health burdens include cancer, cardiovascular disease, diabetes, mental health, and alcohol and substance abuse; they experience worse utilization and access to services; decline in insurance coverage; a solution to some problems is to not lump all types of Latinx individuals together, like native-born, foreign-born, migrant workers, and undocumented.

- Asian American Health Equity: Asian Americans (A.A.) are the fastest-growing minority in the U.S.; A.A.s represent the model minority group and are portrayed as a healthy minority that does not deserve or require additional research; there are several factors influencing disparities among A.A.s, including but not limited to acculturation, nativity, income, educational attainment, health literacy, English proficiency, and immigration status; fortunately there are several organizations and programs that are working towards health equity.

- American Indian and Alaska Native (AIAN) Health Equity: AIANs are given legal rights based on the forced relocation of their tribes throughout American history; however, this does not guarantee access to quality healthcare; the Indian Health Service is one of the most critically underfunded segments of the government; AIANs health disparities go much further, reminiscing to sociodemographic and historical reasons; some of their most significant issues are alcohol and substance use disorders, diabetes, domestic violence, and assault.

- Health Equity for kānaka ʻōiwi, the Indigenous People of Hawaiʻi: compared to the U.S., this group has a disproportionately higher prevalence of chronic medical conditions, as diabetes, obesity, and cardiovascular diseases, and higher mortality rates for cancer, stroke, and heart disease; behavioral health is also a big issue, especially when compared to other groups in the U.S.; it is necessary to plan health initiatives from a Hawaiian perspective to create culturally appropriate programs and materials, mainly thanks to the great diversity of languages, family structures and traditions between this communities.

- Women’s Health Equity: for women, both sex and gender impact their health; women live on average 5 years longer than men; the top two leading causes of death are heart disease and cancer; women have the highest morbidity rate for most illnesses; excluded from medical research and clinical trials, leading to men-focused treatment; women face unique consequences of reproductive health; depression and anxiety are more common in women; in recent years the gap of drug abuse has been narrowing; intimate partner violence increases the risk of lower self-reported health; changes in research policies and community-level interventions with a gender perspective can address these disparities.

- Achieving Men’s Health Equity: Men live shorter lives; the “death of despair” is the drug-related, alcohol-related, liver disease, and suicide mortality in ages 45-54 with a high school or lower degree; this is more pronounced in rural areas; men health equity includes the population-specific approach of men of the different groups and a comparative approach between man and women among the same groups; the way men negotiate their masculinity remains at the margin of men’s health.

- LGBTQ Health Equity: historical injustices and discrimination along with current prejudice affect the health of LGBTQ people negatively; homosexuality used to be considered a diagnosable mental disorder, being transgender still is; in half the states of the U.S., professionals can legally refuse care to patients based on their sexual orientation or identity; the most common types of discrimination are heterosexism, homophobia, cisgenderism, and transphobia; some of the most significant barriers to health equity in this group include obesity, cancer, mental health, substance abuse, and HIV; particular emphasis on HIV among the sexual minority men of color.

- Rural, Frontier, and Appalachian Health Equity: the vast majority of health promotion and prevention strategies are designed, implemented, and evaluated in urban communities; there is stigma attached to what rurality is, and people associate it with remoteness, isolation, self-reliance, agriculture, poverty, religiosity, and health stigma; the most common rural health disparities include mental and behavioral health, obesity and chronic diseases, and poor access to healthcare; the ideal method to approach the health barriers in rural communities is the use of telehealth.

- Health Equity in Immigrant and Refugee Populations: immigrants, together with their U.S.-born children, constitute 28% of the population; conditions that mainly affect this population include tuberculosis, hepatitis, cardiovascular disease, mental health, and infectious diseases; the immigrant health paradox explains how immigrant and refugees come to the U.S. with better health status than native-born but lose this status after some years.

- Health Equity in Veteran Populations: Veterans, due to the nature of their military-related experiences, have increased medical and mental health risks; they are given an integrated U.S. government healthcare system called V.A. healthcare system; there are different risks associated with their period of service, meaning that those who served during the Cold War won’t need the same service as those during the ongoing Gulf War.

- Health Equity in Populations with Disabilities: People with disabilities face disparities among almost all health indicators; these disparities are not only due to the person’s primary disability itself but relates to discrimination and exclusion; to achieve health equity, it is proposed to improve access to healthcare, collect data to drive policies, strengthen the human services workforce capacity, including people with disabilities in public health programs, and ensure preparedness for emergencies.

- Achieving Health Equity for Children: since 1950, infant mortality has been reduced fivefold, vaccines and antibiotics have nearly eliminated significant childhood illnesses, and children born with genetic conditions are now living well into adulthood; however, not all children in the American society enjoy these privileges; healthcare quality has stagnated or even declined in some population groups; being born on different race/ethnic groups relate to significant child health disparities; some essential solutions to problems involving children are high-quality health insurance coverage, and access to comprehensive primary and preventive care.

The third section, “The Path Forward”, is about the complexities of human interaction and social dynamics, relevant for everyone who inevitably interacts with diverse populations. It defines the concept of “Cultural Competence” and “Cultural Humility”. It elucidates how we, as humans, go through a process of lumping and splitting where we assume that people with similar physical characteristics share values, beliefs, and behaviors, even though there are many variations within particular racial groups.

This last section also provides solutions applicable to the healthcare system to those difficulties that minorities struggle with in terms of medical care. For example, it describes an educational program with five intersecting core structural competencies, proposed in 2014 by Metzl and Hansen. It seeks to systematically train healthcare professionals to think about variables like race, social class, gender, religion, sexual orientation, etc. Furthermore, an emphasis is placed on integrating behavioral/mental health services into the preexisting physical health services, how to achieve this, and the benefits it would drive regarding healthcare outcomes. 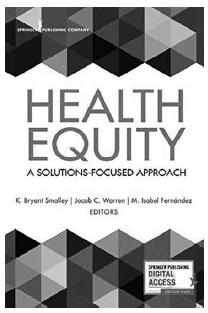