Parasite eggs found in organic remains collected from medieval structures in Raversijde (medieval name: Walraversijde), a village on the northern coast of Belgium, are discussed. The eggs were identified as Ascaris lumbricoides and Trichuris trichiura, both human parasites. Species identification allowed elucidating the origin of the organic sediments and the structures, in this case latrines used by humans. Capillaria sp. and free-living nematode larvae were also found in the latrine. Although neither parasite burden nor prevalence rates could be measured, the abundance of human intestinal parasite eggs indicated a high infection rate in the village residents, reflecting very poor sanitation.

Parasite studies performed on organic material collected from archeological sites are essential to understand an ancient population's health conditions. Organic sediments and coprolites  desiccated or mineralized feces  are mainly used to search for parasite remains. The goal of paleoparasitology as a science is to find and interpret parasites in archeological material by using proper methodological methods and reproducing experiments 1,2.

The first parasite studies found in cesspits and latrines began with Taylor 3 when examining a medieval pit in England. The findings were limited to a generic diagnosis, such as Ascaris sp. and Trichuris sp. eggs 4,5,6. Species identification of trichurids and ascarids found in organic sediments is not easily done, e.g. A. suum and A. lumbricoides, T. suis and T. trichiura, which infect pigs and humans respectively, since morphologically they are almost identical. However Trichuris sp. egg dimensions, as recorded by Beer 7, may point to a specific host, since Trichuris species are highly host-specific.

We performed paleoparasitological analysis in sediment from the archeological site of Raversijde, a small village on the northern coast of Belgium. The contents from two structures that could have been used as latrines, garbage deposits, or food storage sites were examined in an attempt to identify human latrines and also to assess the general sanitary conditions by finding intestinal parasites.

The Raversijde medieval archeological site was inhabited by fishermen. Excavations performed in the layer dated to the 16th century revealed two structures filled with organic sediment, the use of which was to be determined 8. Ten sediment samples from the two structures were collected for paleoparasitological analysis.

The ten samples were prepared following a slightly modified technique proposed by Callen & Cameron 9, by adding 5% glycerin to the aqueous trisodium phosphate solution (Na3PO4) used for rehydration. After 72 hours the rehydrated samples were ground in a mortar and screened through 25µm and 50µm sieves. To prevent fungus and bacterial growth, 50µl of formaldehyde-acetic solution was added to each sample 8.

Twenty slides were prepared from each sample for microscopic analysis, as recommended by standard procedures 10,11. Parasite and food remains were examined under X100 and X400 microscope magnifying lenses, digitally photographed, and measured with an ocular micrometer.

Trichuris sp. eggs (Figure 1) were found in all samples. Ascaris sp. eggs (Figure 2) were also found in all samples except one. The majority of both kinds of eggs were well preserved. One hundred trichurid eggs with both polar projections were measured, ranging within 53.5-55.7 x 25.0-27.1µm (Table 1). Fifty Ascaris sp. eggs were also measured, ranging within 59.94-73.26 x 49.95-59.94µm. Damaged, infertile, and decorticated Ascaris eggs were not measured. Rare eggs of Capillaria sp. and nematode larvae were also found. 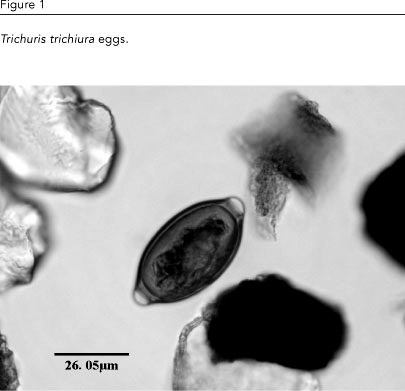 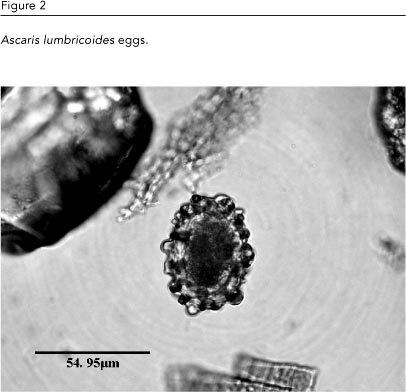 Ascaris and Trichuris are cosmopolitan helminths, and the two are usually present in the same host. Adult Ascaris live in the small intestine of the host, and adult Trichuris in the colon. Eggs passed in the feces need a suitable environment to continue development. Indiscriminate defecation near dwellings contaminates the soil with eggs. Ascaris eggs can remain viable for several years. Humans are infected when they ingest such eggs. Both parasites are directly related to poor sanitation standards and can reach high prevalence rates. Transmission usually occurs by the hand-to-mouth route, and the use of night soil as fertilizer can also be an important source of infection.

A. lumbricoides and A. suum have similar egg measurements, but the association with T. trichiura points to the human parasite. Therefore, it was possible to identify A. lumbricoides and T. trichiura infection in a medieval fisher population using morphometric patterns of Trichuris species, separating them from the two parasite species infecting pigs, A. suum and T. suis. Although rare, cross-infection by human and pig parasites cannot be discarded, as highlighted by Beer 7 and Cromptom 14. Identification of the Capillaria egg species could not be done due to the small number found. Nematode larvae were identified as free-living nematodes by morphology.

It is possible by the identification of the two nematodes to conclude that the medieval structures were used as latrines for human excrement. The abundance of T. trichiura and A. lumbricoides eggs indicates high infection prevalence rates among the ancient population of Raversijde, reflecting very poor sanitation and high population density in that medieval village.

Growing knowledge on parasite infection in the past contributes to the mapping of its distribution among ancient European populations. In cases coinciding historically with New World colonization, European paleoparasitological studies can shed light on the influence of parasitic diseases in new urban settlements in the Americas. Both in North and South America, new data have recently been obtained concerning parasite infections, pointing to similar conditions to those found in Medieval Europe. Paleoparasitological data suggest that although the majority of intestinal parasites already infected pre-Columbian Amerindians 15, a considerable increase may have occurred with European colonization and the creation of new urban settlements.

Results show that light microscopy still offers a precise and reliable diagnosis, sometimes allowing specific diagnosis. Organic sediments can be reliably identified as having human origins whenever specific parasites are present. Paleoparasitology is a science that adds new data to a better understanding of ancient populations' way of life, the parasitic diseases that infected them, and the impact on their subsistence and evolution.

L. F. Ferreira and A. Araujo were the research supervisors. M. L. C. Gonçalves was responsible for epidemiological aspects of the study. F. Bouchet performed rehydration and the laboratory techniques to prepare sediments for analysis. C. H. Klein and T. Iguchi were responsible for statistical analysis of egg measurements. L. Sianto provided bibliographic support. A. Fernandes performed all laboratory work and egg measurements, and conceived this manuscript.

4. Pike AW. The recovery of parasite eggs from ancient cesspit and latrine deposits: an approach to the study of early parasite infections. In: Brothwell D, Sandison AT, editors. Diseases in antiquity. London: Thomas Springfield; 1967. p. 184-8.