The American visceral leishmaniasis (AVL) is caused by parasites belonging to the genus Leishmania (Trypanosomatidae) and is transmitted to humans through the bite of certain species of infected phlebotomine sand flies. In this study, we investigated the natural infection ratio of Lutzomyia longipalpis, the main vector species of AVL in Brazil, in Várzea Grande, Mato Grosso State. Between July 2004 and June 2006, phlebotomine sand flies were captured in peridomestic areas using CDC light-traps. Four hundred and twenty (420) specimens of Lu. longipalpis were captured. 42 pools, containing 10 specimens of Lu. longipalpis each, were used for genomic DNA extraction and PCR (polymerase chain reaction) amplification. Leishmania spp. DNA was detected in three out of the 42 pools tested, resulting in a minimal infection ratio of 0.71%. Restriction fragment length polymorphism (RFLP) analysis indicated that Leishmania (L.) chagasi was the infective agent in the positive pools.

American visceral leishmaniasis (AVL) is a public health problem in Brazil. In Várzea Grande, Mato Grosso State, a total of 138 human cases of AVL were reported between 1998 and 2005 1. In 2003, that municipality was considered an area of intense transmission by the Department for Epidemiological Surveillance in the Brazilian Ministry of Health 2.

In this context, we carried out the present study in order to determine the natural ratio of Leishmania-infected Lutzomyia longipalpis and the infecting Leishmania species in that area.

Phlebotomine captures were carried out for two years during three consecutive days per month, from July 2004 to June 2006. CDC light traps were mounted in peridomestic areas in five houses across three districts 4 of intense AVL transmission (São Matheus and Eldorado - two residences each - and Parque Sabiá - one residence) totaling five traps per day. The selection of areas and residences was based on previous entomological data 4,5, as well as on the prevalence and incidence of human and canine cases of AVL.

Pools containing ten Lu. longipalpis females each were prepared for DNA isolation 6. In order to confirm the extraction of phlebotomine sand fly DNA, these pool samples were amplified by polymerase chain reaction (PCR) in the presence of primers for a constitutive Lutzomyia gene (cacophony) 7,8.

The pool samples were also amplified with specific primers for Leishmania spp. 9. In every PCR reaction set, both negative (no DNA) and positive controls (kDNA purified from Leishmania (V.) braziliensis) were included. Product analysis was performed by PAGE (polyacrylamide gel electrophoresis).

Since each pool sample comprised ten Lu. longipalpis females, the minimal infection rate was calculated as the number of positive pools times 100 divided by the total number of specimens tested 10.

Positive PCR samples were submitted to PCR-RFLP (restriction fragment length polymorphism), aimed to distinguish among the infecting parasite species according to a published protocol 11.

The efficacy of DNA extraction was confirmed by the presence of a 220bp fragment in every pool of Lu. longipalpis DNA (Figure 1). The amplification product for Leishmania spp. (120bp) was detected in 3 out of 42 pools tested (Figure 2). Minimal infection rate was calculated as 0.71% that corresponds to, at least, three infected females among a total of 420 individuals. RFLP analysis of those Lu. longipalpis pools indicated L. (L.) chagasi as the infecting agent with typical gel profiles: a single 120bp and 120, 80, 60 and 40bp fragments after ApaLI and HaeIII digestion, respectively (Figure 3). 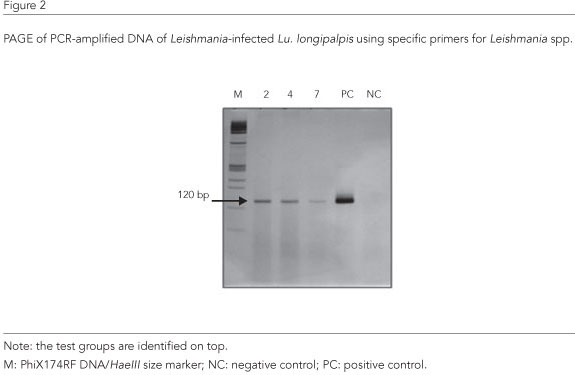 One of the main disadvantages of dissection, besides low sensitivity, is the assumption that all motile flagellates in the sand fly guts are Leishmania parasites. Among molecular methodologies used in the detection of Leishmania, the PCR has been widely reported in the literature for many purposes, including the assessment of infection ratios in both experimentally and naturally infected phlebotomine sand flies. PCR-positive results, however, may be due to the presence of fragments of Leishmania DNA from non-established infections or blood meals from unsusceptible animals, besides live promastigotes. Although neither dissection nor PCR positive results alone can incriminate a given species as an AVL vector, PCR is a particularly effective screening tool in epidemiological surveys due to its high sensitivity and speed. Any positive result may be regarded as additional evidence for the involvement of a certain species in transmission.

Nevertheless, literature data have shown that the infection ratios of Leishmania in phlebotomine vectors are usually low, even in endemic areas. Average values remain below 3%, hardly reaching 10% in a few cases, when assessed either by dissection or PCR-based methods for Leishmania DNA detection (Table 1). Therefore, the minimal infection rate of 0.71% determined for Várzea Grande is in accordance with other literature data for Latin America.

Due to the prevalence of cutaneous leishmaniasis (CL) in Mato Grosso, L. (V.) braziliensis and L. (V.) amazonensis, two etiological agents for CL in Latin America, were also included as references in RFLP. However, the infecting Leishmania in the Lu. longipalpis positive pools from Várzea Grande was unequivocally identified as L. (L.) chagasi. Although Lu. longipalpis is the main vector of VL in Brazil, Lu. cruzi was also suggested as such 1,3. The last species was shown to be widely distributed in Mato Grosso 12,13 but it was not captured in Várzea Grande.

9. Degrave W, Fernandez O, Campbell B, Bozza M, Lopes U. Use of molecular probes and PCR for detection and typing of Leishmania: a mini review. Mem Inst Oswaldo Cruz 1994; 89:463-9.