Montes Claros in Minas Gerais State, Brazil, was considered an intense transmission area for visceral leishmaniasis. This study evaluated sand fly fauna after insecticide application. Captures were performed in 10 districts from September 2005 to August 2006 with CDC light traps inside and outside each residence. Cypermethrin was sprayed in two cycles during November/2005 and May/2006. The 636 specimens collected, belonging to 10 species, were predominantly Lutzomyia longipalpis (79%), and most frequently males (70%). The highest percentage of specimens were captured in areas surrounding domiciles (85.8%). The main species were observed to be sensitive to treatment with the insecticide. The results showed a reduction in the number of sand flies collected after use of cypermethrin in homes and annexes, and with residual effect lasting from two to four months.

Visceral leishmaniasis is a tropical disease important in human and veterinary medicine. It is caused by protozoan of the genus Leishmania (Leishmania) chagasi (Cunha & Chagas, 1937) and is transmitted to humans mainly by the bite of infected female sand flies of the species Lutzomyia longipalpis Lutz & Neiva, 1912. The disease is prevalent on four continents and endemic in 87 countries worldwide 1,2. In the New World, where Brazil accounts for about 90% of human cases reported 3, increasing numbers of recorded cases of visceral leishmaniasis have been associated with urbanization, disorderly growth of cities, poverty and inadequate sanitation conditions.

In Brazil, following World Health Organization (WHO) recommendations, control of visceral leishmaniasis relies on early diagnosis of the infection, treatment of human cases, detection and elimination of domestic reservoirs (infected dogs), and control of sand flies based on environmental management and epidemiological surveillance 4. Control measures for adult phlebotomine sand flies include using insecticides for residual spraying of dwellings and animal shelters, space-spraying, insecticide-treated nets and dog-collars, and personal protection by application of repellents/insecticides to skin or fabrics.

Since the the Brazilian Government prohibited use of organochlorines in agriculture and vector control programs, because of their high toxicity and environmental contamination 7, other insecticides, such as synthetic pyrethroids, have been evaluated for insect vector control 8,9,10.

This study evaluates the impact of use of cypermethrin pyrethroid insecticide on sand fly populations, as a control measure against visceral leishmaniasis in an endemic area of intense transmission of the disease.

The municipality of Montes Claros, in northern Minas Gerais State, Brazil, covering approximately 3.577 sq.km., lies at 638m altitude and geographic coordinates 16º43'41'' South latitude and 43º51'54'' West longitude, 420km from the state capital. The area is characterized by semi-humid tropical (warm and dry) climate, with average temperatures around 25ºC and prolonged dry season (approximately 5 months per year). Climate data indicate annual precipitation of around 520mm, with rainfall occurring from December to February and relative humidity ranging from 52 to 80%. The vegetation in the region is predominantly savannah with denser wooding in the damper valley bottoms, near riverbanks. The municipality is enclosed by hills.

Systematic captures were carried out monthly, from September 2005 to August 2006, in 10 districts of Montes Claros using CDC light traps 11. Two traps were placed in one residence per district for 3 consecutive days a month, one inside the house and another in the peridomicile, totaling 20 traps. The captured specimens were preserved in glass vials containing 70% ethanol and transferred to the laboratory for identification using the taxonomic keys of Young & Duncan 12. Specimens with missing or damaged characters that impaired identification at the specific level were considered as Lutzomyia spp.

in two cycles: November/2005 and May/2006. The insecticide was applied to internal and external walls of the 10 selected houses and their annexes (chicken coops, stables and warehouses) and in all residence in the neighborhood.

The one-sample Kolmogorov-Smirnoff test was used to determine whether a variable was normally distributed. Collected data on every two months were grouped for further statistical analysis. P-values were determined by two-tailed Student t test to assess differences before and after application of cypermethrin pyrethroid. A p-value < 0.05 was considered significant. All statistical analysis was carried out using Prism 5.0 for Windows (GraphPad Software Inc., La Jolla, USA).

The monthly distribution of main sandfly species is demonstrated in Figure 1. L. longipalpis, L. sallesi and L. intermedia constitute approximately 90% of the fauna captured. These species were sensitive to treatment with the insecticide. The distribution of L. longipalpis captured indoors and outdoors in the municipality of Monte Claros is shown in Figure 2. 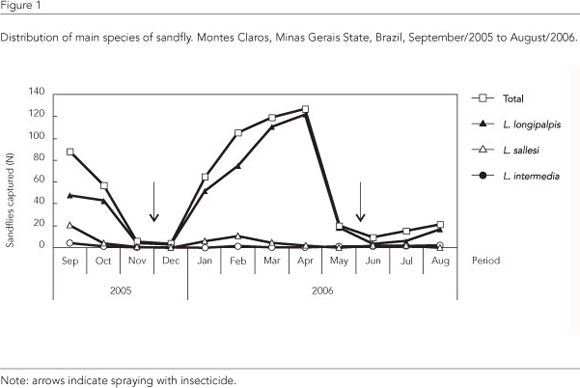 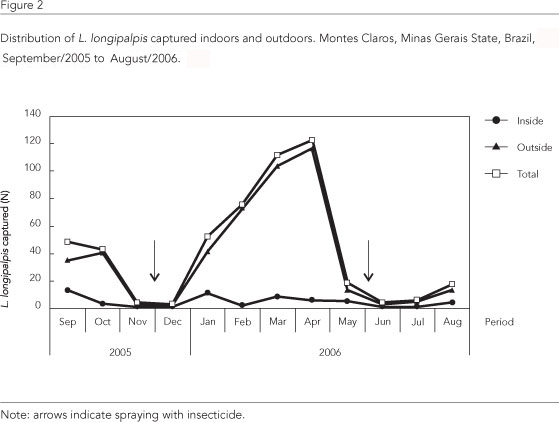 The two months prior to each spraying campaign (Sep-Oct/2005 and Mar-Apr/2006) were compared with the subsequent marking periods. The results showed that, two months after spraying, significant reduction occurred only outdoors (p = 0.0053). In the second spraying period, the differences between pre- and post-spraying were significant at two months (p = 0.0065) and four months (p = 0.0057) after spraying. Thus, the insecticide was less effective in the first cycle (two months) and more effective in the second cycle (four months).

In this study there was a clear predominance of L. longipalpis (79%) both inside and outside domiciles. These findings reinforce the idea that this species has been frequently found in the home environment, and is perhaps better adapted to the presence of man and domestic animals in endemic areas of visceral leishmaniasis 14. In studies by Monteiro et al. 15 at the same capture sites, 1,043 specimens of sand flies belonging to 16 different species were captured. When comparing the two capture periods, species such as Brumptomyia sp., L. evandroi, L. cavernicola, L. migonei, L. peresi, L. pessoai and L. trinidadensis were not observed in the present study. On the other hand, specimens of L. lutziana, absent in the previous study, were captured in this study. Nonetheless, these findings can be expected to occur due to annual variation of the cycle of each species, or perhaps to these species' sensitivity to the insecticide.

Among the measures recommended by the WHO, sand fly control by application of insecticides seems most effective in reducing Leishmania transmission, according to several reports where the measure was used successfully 16,17,18. Mazzarri et al. 19 showed that a field population of L. longipalpis was susceptible to all insecticides tested [organochlorines (DDT), carbamates (propoxur), organophosphates (fenitrothion, malathion and pirimiphos methyl) and pyrethroids (deltamethrin, cyhalothrin and permethrin)], with little or no significant resistance.

In Brazil, some studies have shown that pyrethroid insecticides have major impact in sand fly control. Falcão et al. 8 showed a significant reduction in the number of sandflies indoors after using deltamethrin insecticide. Marcondes & Nascimento 20 also observed a notable decrease in populations of several arthropods, including L. longipalpis. Teodoro et al. 21 observed that peridomicilary use of deltamethrin and removal of organic matter from the soil surface can also significantly reduce the sandfly population.

As in Figure 1, we observed that the number of insects captured dropped abruptly immediately after application of two cycles of insecticide, i.e., November/2005 and May/2006, suggesting temporary (two- or four-month) efficacy in reducing sand fly population density. This efficacy may be curtailed by onset of the rainy season in the region (December to February).

De Silans et al. 10 evaluated the residual effect of cypermethrin in an endemic area for visceral leishmaniasis in Paraíba State. The results showed that cypermethrin showed efficacy limited to two months inside the home and no significant effect on vector populations outside the home (Figure 2). Teodoro et al. 22 found cypermethrin to offer little efficacy, failing to control a sandfly population in Paraná State. In the present study, cypermethrin produced residual effect for two months after the first cycle (Dec/2005) and four months after the second (May/2006).

In view of the sand fly capture curve in this study, we believe that intervention activities with insecticide in the municipality were timed correctly (September to November and March to May), preceding the start of the rainy season and, consequently, peak sand fly population density.

Finally, we observed that both the cypermethrin insecticide and the methodology employed were effective, although the former's residual power may be overestimated. Accordingly, our results recommend three or four insecticide sprayings every year to achieve effective control of the sand fly population, which is at variance with the measures recommended by Brazilian Ministry of Health (Ministério da Saúde) 13.

To the agents of the Montes Claros Municipal Health Department and the residents of dwellings surveyed in the municipality for their collaboration, friendship and support. To FAPEMIG (PPM-CDS APQ-5429-5.01).

1. Desjeux P. Information on the epidemiology and control of the leishmaniasis by country and territory. Geneva: World Health Organization; 1991.