Cost-related medication non-adherence (CRN) is estimated to occur in 13% to 32% of elderly persons 1,2. Patients who reduce medical costs by taking their medications sporadically, splitting pills, using smaller doses than prescribed, or delaying refills may do not achieve the full therapeutic benefits of therapy 3. Indeed, this subset of non-adherence has been associated with serious health consequences, including decrements in self-reported health status 4, increased hospital admissions 4,5, and death 5.

Although the costs of prescription drugs pose a growing burden on the elderly 6, they cannot fully explain the occurrence of CRN, since many patients continue using their medication as prescribed despite the cost, and others forgo medication due to costs when they may be able to afford those treatments 2,7.

Since individuals' responses to cost pressures cannot be predicted solely based on their level of financial burden, Piette et al. 8 suggest that the cost-adherence relationship is modified by multiple social contextual factors. However, this has never been formally tested 9.

One of the key components of social context is social capital 10, which can be described as a feature of social structure based on reciprocity, trust, and mutual obligations, which serve to facilitate action for shared benefit, through membership in civic and community networks and other social structures 11,12,13. Despite the controversies that surround this literature 14,15, social capital theory has become prominent in public health research, since it has been linked, both in the general as well as in elderly populations, to a wide range of health measures, including perceived health status 16,17,18, quality of life 19, and access to health care 20.

With respect to medical treatment, social capital may determine adherence through its influence on health-related behaviours, on transmission of health information, on access to health services, and through social control over deviant health-related behaviour 18. The underlying, but yet unproven assumption, has been that low levels of social capital might increase the probability of CRN.

This study aims to investigate the association between perceived social capital and CRN among older people, after controlling for sociodemographic determinants, health conditions and health system characteristics.

The survey was a two-stage stratified cluster sample, using the Brazilian census tract as the primary selection unit and household as the sample unit. The sample was based on 7,500 households with 24,000 residents. All residents aged 18 years or older were eligible for the survey. A total of 13,701 respondents completed the questionnaire (1,778 aged 60 years or older), yielding a response rate of 79%. Participants' distribution by gender and age was similar to that observed among the total Greater Metropolitan Belo Horizonte population aged 18 or older. More details on the survey can be seen in another publication 21.

For the present study, we selected all of the 1,386 participants from this survey aged 60 years or older with a history of drug prescription in the previous 30 days.

The Greater Metropolitan Belo Horizonte Health Survey was approved by the Institutional Review Board of the Oswaldo Cruz Foundation in Belo Horizonte, Minas Gerais State, Brazil, in 2001.

For the analysis, we constructed a summary indicator of CRN based on other studies that have used a similar approach 1,6,7: the value "yes" was assigned if a respondent indicated "yes/ever during the previous 30 days" on any of the following: "did not have a completed prescription because it was too expensive"; "skipped doses to make the drug last longer"; or "took smaller doses of a drug to make the medication last longer".

We measured individual social capital through three different broad and multidimensional indexes: neighbourhood trust, perception of attachment to the neighbourhood, and perception of physical environment. We also used a question on perception of help. The construction of social capital indexes was similar to Baron-Epel et al. 17. Some of the original questions were recoded in reverse order to ensure data consistency. We computed Cronbach's alpha coefficient 22 to check the reliability of the variables used for constructing each of the social capital indexes. The estimated coefficients show a moderate to high reliability, varying from 0.315 (for responses to questions that enter into the construction of perception of physical environment), 0.317 (for social trust index) to 0.678 (for perception of attachment to the neighbourhood index) 16. The indexes and the question are described below:

 Index of perception of attachment to the neighbourhood

In this study, as an indicator of socioeconomic status, we used schooling, a characteristic that generally does not change after a certain age, instead of income, a characteristic which can change during the individual's lifetime 32.

We first conducted univariate analysis, based on robust Poisson regression 33 and Pearson's chi-square test to explore the association between characteristics of the study population and social capital measures and CRN (a binomial variable: 0 = no non-adherence due to cost; 1 = cost-related medication non-adherence, was used as the dependent variable). Then we conducted the multivariate analyses, based on robust Poisson regression analyses, to assess the independent association between CRN and each variable. All independent variables with a p-value of less than 0.20 in the univariate analysis were initially included in the multivariate models. A backward elimination process eliminated non-significant variables at p-value < 0.05. The prevalence ratio (PR), 95% confidence interval (95%CI), and p-value are presented. The variance inflation factor (VIF) was also estimated to exclude the possibility of overlapping of highly-correlated independent variables (maximum VIF value 1.42 and minimum tolerance index 0.71), showing that multicollinearity was not a concern in fitting these models. All statistical analyses were carried out using the survey (svy) command in the Stata software, version 10.0 (Stata Corp., College Station, USA).

From 1,386 participants of the health survey with a history of drug prescription in the previous 30 days, there were 1,017 (73.4%) for whom complete data on all study variables were available, and these were included in this analysis. Participants and non-participants were similar in terms of mean age (70.3 years and 69.9 years, respectively, p = 0.417), but females are overrepresented in our study (66% and 55.9%, respectively, p = 0.002).

As shown in Table 1, 13.4% of respondents answered affirmatively to cost-related medication non-adherence questions, with the following predominant characteristics: women (66%), non-white skin colour (52.8%), and less than seven years of schooling (76.7%). In relation to social capital variables, the majority of participants reported low levels of trust in people in their neighbourhood (82.6%), and about one third had low perceptions of attachment to both their neighbourhoods and the physical environment. Lack of help was reported by almost a quarter of participants. 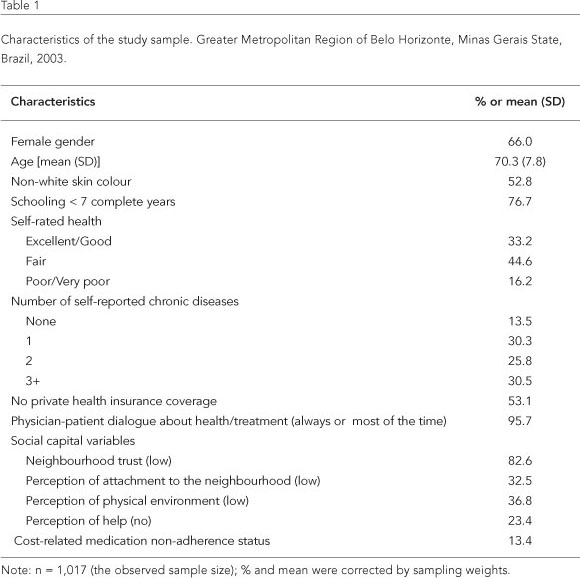 Tables 2 and 3 show the proportion of individuals reporting CRN stratified by covariates previously described as associated with CRN and by social capital measures. Schooling, self-rated health, number of self-reported chronic diseases, private health insurance coverage, and frequency of physician-patient dialogue about health/treatment were all significantly associated with CRN (p < 0.05). With respect to social capital measures, the perception of attachment to the neighbourhood and perception of help were significantly associated with CRN (p < 0.05). 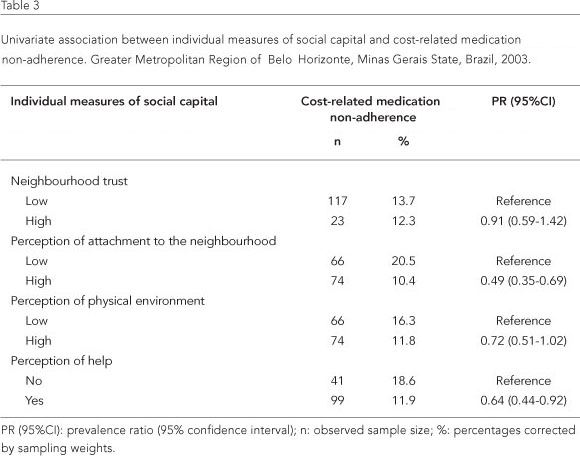 Significant results (p < 0.05) of the multivariate analysis of factors associated with CRN are presented in Table 4. Elderly people with a better perception of attachment to the neighbourhood, and those covered by private health insurance had a significant reduction in prevalence of reporting CRN. On the other hand, poor self-rated health, the presence of more chronic diseases, and a lower frequency of physician-patient dialogue about health/treatment were associated with significantly higher prevalence of CRN.

The literature suggests that the relationship between patients' out-of-pocket medication costs and adherence is complex and may be modified by multiple contextual factors. In this population-based study, we found evidence that low levels of social capital appear to be associated with cost-related medication non-adherence. Indeed, among the elderly, a low perception of attachment to the neighbourhood contributes independently to CRN.

Despite the lack of other similar studies to directly compare with these results, we believe similar findings could be expected, since there is solid evidence linking higher stocks of social capital with better health outcomes 16,17,18,19,34.

The mechanism linking social capital and CRN remains to be elucidated, but it is possible that high stocks of social capital can act as a buffer against health inequities, helping people to access services and resources 35, such as the provision of medicines. In particular, those elderly with a high perception of attachment to their neighbourhood probably have healthier behaviours 36, such as adherence to medical prescriptions 37. Those elderly might directly benefit from the effects of belonging to a community based on common interests and feelings, and cultural or leisurely pursuits, which may all influence the community member's health 36.

An independent association between CRN and other covariates, like private health insurance coverage, self-rated health status, number of chronic diseases, and frequency of physician-patient dialogue about health/treatment was described previously 31. The results of the present study add to those from the earlier study to show that this association persists even after adjustments for social capital covariates.

In fact, the individual is the repository of societal norms and values, and it is at the individual level that people use personal social networks to strengthen social support, social influence, social engagement, and attachment to access scarce resources 11,41. We examined people's perceptions of their subjective social context that may provide a crude but adequate substitute for group-level observations 42.

Given the cross-sectional nature of the study, we cannot deduce causal relationships between cost-related medication non-adherence and related factors, but merely describe probable associations. However, one of the current study's strengths is that (to the best of our knowledge) it represents the first effort at examining the association between CRN and social capital.

In conclusion, the main finding of our study the evidence of effect of social capital on CRN suggests that future research on CRN should include the social context in order to achieve a more complete understanding of this complex phenomenon. Although the underlying path for this particular association remains elusive and the direction of causality cannot be established firmly with the present design, we believe that health policy could use such information, for instance, to establish initiatives to intensify the involvement between the elderly and their community to assist them in taking their medication as prescribed, despite cost pressures.