The authors conducted a cross-sectional study of the local canine population in the Krenak indigenous community to detect parasites of the genus Leishmania and identify the circulating species and the proportion of asymptomatic dogs, while investigating associations between canine infection and the dogs' sex, age, and hair length. A seroepidemiological survey was performed, including 63 dogs. All the animals underwent clinical examination to verify the presence of characteristic signs, and serum samples were taken for serological tests (ELISA, IIF). Infected dogs culled by the health service were necropsied and the material was analyzed using molecular diagnostic techniques. The cross-sectional study detected a 46% prevalence rate, and the circulating species was Leishmania (L.) chagasi. The statistical analysis showed no association between infection and the independent variables. The study generated data on the epidemiological situation with canine infection in the area, which was previously unknown.

American visceral leishmaniasis (AVL) is caused by caused by parasites of the genus Leishmania and transmitted by phlebotomine sandflies 1,2,3,4. Reservoirs for the disease include the domestic dog, of major epidemiological importance in maintaining the disease cycle. Various studies 3,5,6 have shown that in some cases canine infection precedes the appearance of human cases, but this finding may reflect dogs' greater susceptibility to the infection. Culling of infected dogs as a prophylactic and control measure is routine in endemic control programs 7,8. Serological diagnosis may not detect asymptomatic infections 9. Molecular tests appear promising, but their precision and reproducibility are still under investigation 10,11.

This cross-sectional study was performed to generate epidemiological data on the presence of canine infection, its etiology, and dogs' susceptibility to the infection. The study area was classified as susceptible to visceral leishmaniasis, based on detection of the vector Lutzomyia longipalpis in 2007 by the Minas Gerais State Health Department (SES/MG).

The Krenak indigenous community is located in the municipality (county) of Resplendor, Minas Gerais State, Brazil. The municipality has a total population of 17,124, of whom 300 are Krenak indigenous people belonging to 60 families. The indigenous community consists of three villages: Barra do Eme, Cacique, and Porto da Barca. During the survey, 63 dogs from all three villages in the Krenak indigenous community were examined and tested, representing 94% of the total estimated canine population of 67 animals. A canine seroepidemiological survey was performed, a routine practice under the Endemics Control Sector of the National Health Foundation (FUNASA), the institution responsible for taking serum and tissue samples and culling the infected dogs. The study and procedures dispensed with prior approval by ethics committees.

The dogs were classified as follows: asymptomatic (absence of signs), symptomatic (more than three signs), and oligosymptomatic (one to two signs). A questionnaire was prepared by the René Rachou Research Center of the Oswaldo Cruz Foundation (CPqRR/Fiocruz) and applied by the veterinarian in charge of the survey.

The serological tests were ELISA for screening and indirect immunofluorescence (IIF) as the confirmatory test. The antigens were provided by the Institute of Immunobiological Technology of the Oswaldo Cruz Foundation (Bio-Mangui-nhos/Fiocruz).

Serological testing was performed by the Ezequiel Dias Foundation (FUNED) in parallel with the Federal University in Ouro Preto (UFOP).

The infected animals were sacrificed by a veterinarian. After verification of the animal's sedation with xylazine chlorhydrate reinforced with thiopental, euthanasia was performed by electrical shock. Disposal of the cadavers of the euthanized dogs complied with Ruling RDC nº. 33 of February 25, 2003 12. The tissue samples were sent to CPqRR/Fiocruz for identification of the circulating species of Leishmania spp. The molecular method used was polymerase chain reaction (PCR) 13. Species identification used RFLP-PCR 14.

Prevalence rates were compared according to sex, age, and hair length using the chi-square test with 95% significance (p < 0.05).

Prevalence of canine infection was 40% in the Barra do Eme village, 35% in the Cacique village, and 76.9% in the Porto da Barca village, with an overall rate of 46% (Table 1). No statistical difference was observed between occurrence of the infection and the variables sex, age, or hair length (Table 2). 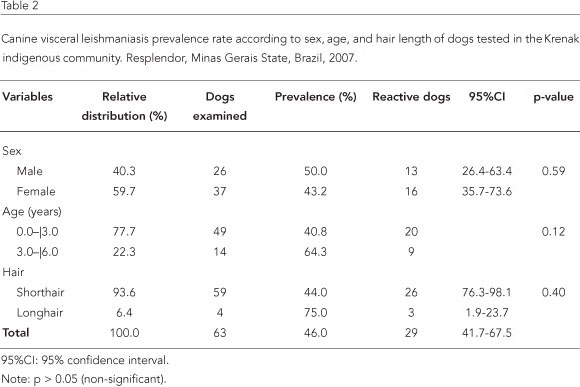 According to the clinical classification, 27.3% of the dogs were asymptomatic, 54.5% oligosymptomatic, and 18.2% symptomatic. The most frequent symptoms were: splenomegaly, wasting, onychogryphosis, opaque fur, and hepatomegaly. Some typical symptoms of canine visceral leishmaniasis like alopecia, furfuraceous dermatitis, and keratoconjunctivitis were less frequent. The circulating species was Leishmania (Leishmania) chagasi.

Although overall prevalence was 46%, distribution of cases by village was heterogeneous, with 76.9% prevalence in Porto da Barca, 40% in Barra do Eme, and 35% in Cacique.

Even without previous reporting of human or canine cases, canine surveys are important for monitoring the disease in the Krenak indigenous community. Indigenous peoples in Brazil are generally subject to precarious living and health conditions. The indigenous communities lack basic sanitation and have high malnutrition and parasite infection rates, besides other diseases 15.

Canine reservoirs play a central role in the expansion of the visceral leishmaniasis in endemic areas 16,17,18,19.

There was a high prevalence of asymptomatic dogs. One hypothesis that could explain the ineffectiveness of culling infected dogs as a control measure is the persistence of undetected asymptomatic animals due to the diagnostic tests' low sensitivity, so that these dogs remain in the area and contribute to maintenance of the disease 19,20,21.

We emphasize the importance of frequent serological surveys and knowledge of the relative abundance of the various Lutzomyia species, aimed at identifying the most susceptible period for visceral leishmaniasis transmission and orienting chemical vector control measures.

In order to better understand the epidemiology of canine visceral leishmaniasis and avoid the emergence of human cases in the Krenak indigenous community, regular serological surveys are needed, followed by culling of infected dogs and studies on sandfly density.

The authors wish to thank the Brazilian National Health Foundation for the logistic support, the Ezequiel Dias Foundation and the Federal University in Ouro Preto for the serological testing, and the René Rachou Research Center/Fiocruz for the molecular testing.