This study aimed to estimate thyroid cancer incidence in Brazil in 2006 using polynomial models that take age and birth cohort effects into account in the estimation process. Estimates were based on new cases of thyroid cancer in nine Brazilian cities (Manaus, Palmas, Natal, Recife, Cuiabá, Belo Horizonte, São Paulo, Porto Alegre, and Curitiba) and the Federal District from 1997 to 2001. We estimated 6,066 new cases, of which 1,065 in men and 5,001 in women. The incidence rates were, respectively, 1.16 and 5.27 per 100,000 inhabitants. Rates increased with age in both genders, especially after 30 years. The size and profile of rates according to age and gender indicate that the method yields plausible estimates.

The recent literature has shown an increase in differentiated thyroid cancer. The hypothesis has been raised that this increase results from the expanded use of diagnostic practices such as ultrasound and fine needle biopsy 1,2. According to another hypothesis, the increase is actually determined by an association with a series of risk factors, including age, gender, ethnicity, and geographic location 1,3.

Access to information on cancer incidence is essential for defining the role of risk factors and setting priorities for prevention, planning, and health services administration. However, such information is rarely available at the national or regional level. Methods that allow obtaining an estimate of new cases based on information about incidence are highly useful and offer an overview of the cancer distribution pattern for the country and its regions. In Brazil, as in various other countries, the real number of new cases diagnosed by health services each year in not known, due to the lack of a nationwide cancer registry, so that annual incidence estimates are still highly useful 6.

An ecological study was conducted to estimate cancer incidence for Brazil in the year 2006.

The population data sources were the National Population Censuses (1980, 1991, and 2000), the Population Count (1996), and population estimates (Instituto Brasileiro de Geografia e Estatística - IBGE; http://www.ibge.gov.br). Mortality data for the years 1979 to 2004 were obtained from the Mortality Information System (SIM). Population data and mortality data from the SIM were downloaded from the website of the Health Informatics Department (Departamento de Informática do SUS - DATASUS; http://www.datasus.gov.br). New cases of thyroid cancer were downloaded from data in the Population-Based Cancer Registries (PBCR) for Manaus, Palmas, Natal, Recife, Distrito Federal, Cuiabá, Belo Horizonte, São Paulo, Porto Alegre, and Curitiba, available on the website of the Brazilian National Cancer Institute (Instituto Nacional de Câncer - INCA; http://www.inca.gov.br) according to gender and age bracket for the years 1997 to 2001, which includes most of the records.

Poisson polynomial models were adjusted for the estimated incidence rates for the year 2006. These models considered age and birth cohort information during the incidence rate estimation process 8.

Age brackets were divided into five-year intervals (Δx = 5), while the last bracket was defined as 80 years and older. Mean points in the age brackets (x) were calculated and centered on 42 years (x0), the midpoint between 40 and 44 years. The following formula was thus applied:

Five-year cohorts were defined (Δu = 5). For example, the birth cohort for children 0 to 4 years of age from 1979 to 1983 corresponds to the cohort of children 5 to 9 years of age from 1984 to 1988. Birth cohort was defined as a function of age bracket and the period in which a new case occurred, both in five-year intervals. For analytical purposes, birth cohort (u) is equal to the midpoint in the period (p) minus the midpoint in age (u = p-x). The birth cohort (u) was centered on the year 1991 (u0). The following formula was thus applied:

where: α and β are the model's coefficients.

The models used to estimate the incidence rate (Λx,u) are identified as I3C6 for men and I1C4 for women: 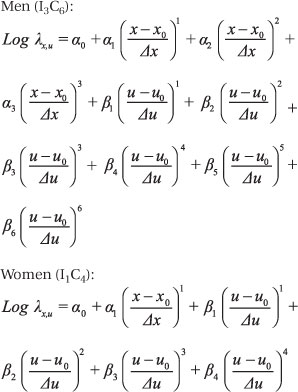 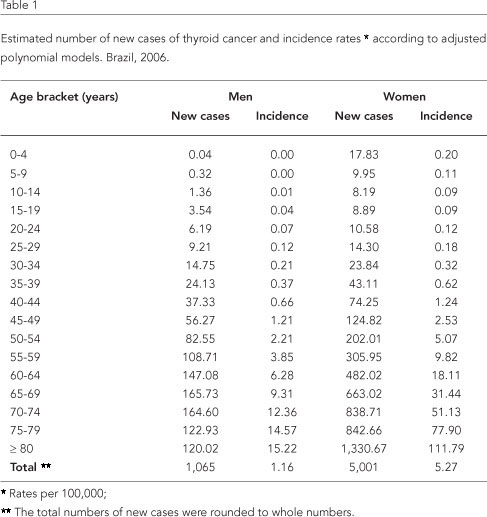 The profile of estimated rates by gender and age is consistent with what is expected for thyroid cancer, with a predominance in women and increasing incidence with age, especially after 30 years 1,2,3. As for the size of the rates, a recent study based on PBCR in the cities of Belém, Recife, Goiânia, São Paulo, and Porto Alegre from 1993 to 2001 showed a wide variation in the incidence rates 5, and the estimates obtained in the current study were consistent with what would be expected for a mean value for Brazil. According to Coeli et al. 5, the possible explanations for the geographic variations in incidence are probably related to the availability of medical care resources in the different regions and to the quality of data in the cancer registries. Thus, it would be interesting to conduct future studies aimed at evaluating the method's adequacy for obtaining estimates in smaller geographic areas such as regions and States of the country.