Trajectories of cognitive decline over 10 years in a Brazilian elderly population: the Bambuí cohort study of aging

Few population-based studies have examined long term cognitive trajectory, and these studies were conducted in high income countries. We investigated the association of age, gender and education with 10-year cognitive trajectory in a well-defined population of elderly using data from the Bambuí Cohort Study of Aging, in Brazil. Cognition was measured using the Mini- Mental State Examination (MMSE). Cohort members underwent annual follow-ups. This analysis was based on 12,206 MMSE measurements from 1,461 (91%) baseline participants. We used mixed effects models to study MMSE as outcome. The key findings from this analysis are that women and people with a higher schooling level at baseline had high scores of MMSE, while older participants started off lower. Regarding cognitive decline, women, older people and those with a higher schooling level declined faster.

There is a normal process of age related cognitive decline across the life span characterized by increasing difficulties with memory, speed of information processing, language and other cognitive functions. More intense closing stages of decline in cognition tend to be defined as dementia but decline in the non-demented population has also been shown repeatedly with some cognitive functions more affected than others. Although cognitive decline is known to increase with age 1,2, low-education levels 1,3,4 and inconsistently associated with gender 2,3,4,5,6, in cross-sectional studies, measurement of trajectories and production of these trajectories are much less certain.

Few studies have investigated the relationship of basic variables such as age, gender and education in cognitive trajectories in demented and non-demented. In demented participants, Wilkosz et al. 7 showed six trajectories with significantly different courses and rates of cognitive decline. These trajectories were best defined by subject age and Mini-Mental State Examination (MMSE) 8 score at the initial assessment. In general, subjects with older age followed a trajectory with slower cognitive decline. Participants with higher initial MMSE scores tended to follow trajectories of slower decline, while those with lower initial scores tended to decline more rapidly.

Among studies that have focused on non-demented participants, one in the United States demonstrated that cognitive decline was faster in older cohorts, women, widowed, and never-married individuals but was slower in non-Hispanic black Americans 9. However, at first assessment, women had higher scores than men, and non-Hispanic black Americans had lower scores than non-Hispanic white Americans. Educational level was not associated with rate of decline in cognition scores. Another study carried out in the United Kingdom, demonstrated that education and social class were not related to decline and increased rate of change 10. In contrast, poor mobility was associated with lower cognitive performance, increased cognitive decline and increased rate of change of cognitive decline.

Although, some studies have examined the trajectory of cognitive decline, as mentioned above, to our knowledge there has been no research carried out in a developing country. Developing countries have on average lower education levels but also a much wider range of educational levels and hence it might be possible to demonstrate a relationship between education and cognitive decline, which is attenuated in developed countries by the restricted range.

In this study, we investigated the association of age, gender and education with trajectories of cognitive decline in a well-defined population of Brazilian elderly with low-education levels, using data from a 10-year population-based cohort study.

This analysis was carried out using data from the Bambuí Cohort Study of Aging, which took place in Bambuí, a town of approximately 15,000 inhabitants, situated in Minas Gerais State in Southeastern Brazil. In the study area, the human development index (a composite statistic used as an index to rank countries by level of "human development") was 0.70, which implies medium development, and the life expectancy was 70.2 years in 1991 11. The city had one general hospital and approximately one physician per 1,000 inhabitants. The main economic activities were agriculture (particularly farming) and commerce 11.

The Bambuí Cohort Study of Aging procedures have been described in detail elsewhere 11,12. Briefly, the baseline cohort population comprised all residents aged 60 and over on January 1st, 1997 who were identified by means of a private census in the city. From a total of 1,742 older residents identified in this census, 1,606 (92.2%) participated in the baseline survey. Baseline data collection was carried out from February to May 1997, comprising standardized interviews and selected biological measures. Cohort members underwent annual follow-up, consisting of standardized interviews, and verification of death certificates.

The Bambuí cohort interview includes a standard Brazilian version of the MMSE 13. In the Brazilian validation study, some questions were modified according to their relevance to the target population 14. In the orientation section by Fostein et al. 8 questions about the season of the year, building, and floor were replaced by period of the day, room, and address 13. In the registration and recall section, the words used were cat, tree, and guitar (those words in Portuguese are gato, árvore and violão). In the attention and calculation section, serial fives replaced serial sevens, and "Maria", which is more commonly used in Brazilian culture, replaced spelling "world" backwards. The MMSE is a widely used instrument for assessing cognitive impairment 8. However, its application in research is much broader, in particular as a measure of cognitive function in clinical and epidemiological studies of persons without dementia.

Age, gender and schooling were considered as exploratory variables in the present analysis.

We used mixed effects models to study MMSE as outcome with sex, age group (four levels: 60-64, 65-69, 70-74, 75 or more years old) and education (three levels: 3 or less, 4-7, 8 or more years of schooling) and as exposures. Also, since it is important to take account of the dropout in longitudinal studies like this, a further factor, pattern, was included to indicate at which point in time the last valid observation occurred. Time was included in the model in years and as an interaction with pattern. Three separate models were fitted to incorporate each of the three interactions of interest: time with each of sex, education and age group. The models include a random intercept and random slope for time within participant to account for the correlation between observations. The analysis was performed using the R software (The R Foundation for Statistical Computing, Vienna, Austria; http://www.r-project.org).

The total number of participants who answered the MMSE in the baseline of the Bambuí Cohort Study of Aging was 1,558 (97%). However, participants with only one observation were excluded from the main analysis, as they did not allow for estimation of time trends. Participants with missing education (two participants) were also excluded. This left 1,461 participants. The median age at entry was 69.1 years (standard deviation - SD = 7.3) and 60.2% were female. The mean number of cognition assessment visits was 7.9, consisting of a total of 12,206 MMSE measurements. 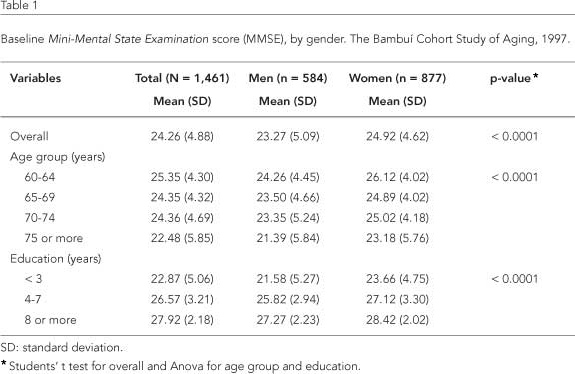 Table 2 shows the results of three separate mixed models to test primarily interactions between gender, education, age and MMSE score trajectory. Each model is adjusted for the other two main effects. In model 1, the positive coefficient for the main effect of gender indicates a higher initial level of 0.4 MMSE points in women. However, the significant negative interaction with slope indicates a faster decline in MMSE in women so that the performance of the two sexes is equivalent after about four years with women predicted to score lower from then on. 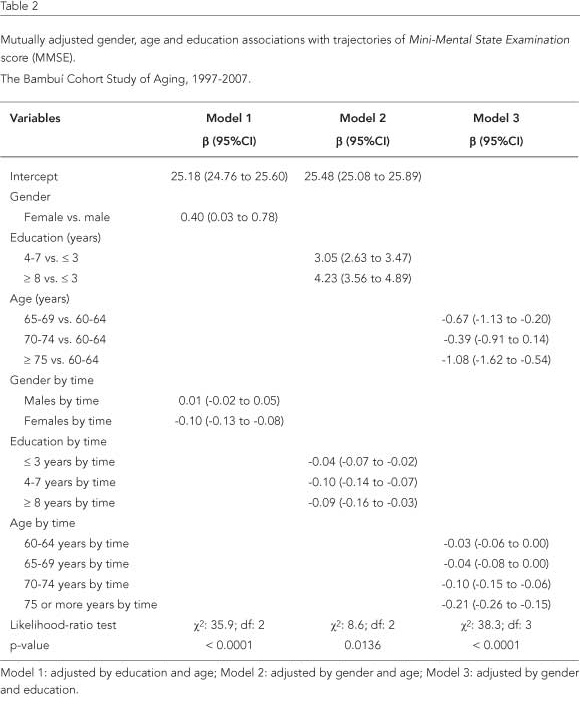 Finally, the model 3 investigated the effect of age group on slope. Main effects for age do not indicate a monotonic association with initial MMSE score. However, the significant interaction indicates faster decline with increasing age, especially for the two oldest groups. The results for the dropout patterns and their interaction with time are not presented but in general show that participants who dropped out early had a steeper rate of decline than later dropouts.

In this prospective population-based cohort study, carried out in a well-characterized large Brazilian elderly population, we modelled the effects of age, gender and education on initial cognitive performance measured by the MMSE and rate of decline. The key findings from this analysis are that women and people with higher levels of education at baseline have high scores of MMSE, while older participants started off lower. Regarding cognitive decline, women, those with higher education and older people declined faster.

The current study is, to our knowledge, the first investigation of cognitive trajectories to have been carried out in a low or middle-income country in a population with a low education level, adding to the relatively few longitudinal studies that have investigated this. Its strengths include the large population-based cohort followed over an extended period and the annual examination of cognitive performance over a long period of time using a widely applied brief assessment measure (the MMSE) administered in an identical format. It also provides supportive evidence that the MMSE, although relatively crude, is adequate to pick up variations between individuals and influences on decline over the period studied. The main limitations are the assumptions in the models of a linear decline and further assumptions regarding dropout patterns being the same whether dropout is due to refusal or death.

Studies investigating the trajectory of cognitive decline in older populations are rare 8,9,10 and fail to find a consistent education effect. Anstey & Christensen 15, in a review of the literature, identified 14 studies that examined the effect of education as a risk factor for cognitive decline in old age, but results were not consistent. All studies using mental status measures 16,17,18,19,20,21,22 such as MMSE (used and Bambuí) found a protective effect of education, while studies including measures of memory, verbal fluency/vocabulary and those that involve reasoning and induction showed 75%, 71% and none protective effects of education, respectively. However more recently, two studies 9,10 assessing cognitive function using mental status measures, MMSE and the Telephone Interview for Cognitive Status (a validated assessment tool comparable to the MMSE 22) did not find a protective effect of education.

Findings from our study are mostly comparable with those from previous reports in which the same exposure measure (mental status measure) was administered to older adults in longitudinal population-base surveys 9,10,16,17,18,19,20,21,22. The previous findings at baseline of most studies demonstrated that women had higher scores than men and older participants had lower scores than younger participants and are consistent with our findings 9,10,16,17,18,19,20,21,22.

In conclusion, in this large cohort of a Brazilian elderly population with low education levels, gender, age and education were associated with long-term rates of cognitive decline. Further analyses are needed to examine the effects of health conditions and other potential confounding variables on the MMSE trajectories.

To CNPq, FINEP and CAPES for their financial support.