Birth cohort differences in cardiovascular risk factors in a Brazilian population of older elderly: the Bambuí cohort study of aging (1997 and 2008)

The aim of this study was to investigate whether cohort differences exist in the prevalence of cardiovascular risk factors among older elderly from the Bambuí Cohort Study of Aging. Participants were those aged 71-81 years at two points in time a decade apart: 457 in 1997 (earlier cohort) and 553 in 2008 (recent cohort). The prevalence of hypertension (PR = 1.27; 95%CI: 1.19-1.36) and of diabetes mellitus (PR = 1.39; 95%CI: 1.06-1.83) was higher in the recent cohort compared to the earlier one, regardless of sex. The recent cohort had a lower prevalence of smoking (PR = 0.58; 95%CI: 0.42-0.80), and lower total cholesterol/HDL cholesterol ratio level (PR = 0.85; 95%CI: 0.80-0.89). There was a 136% increase in the pharmacologic treatment of diabetes and a 56% increase in pharmacologic management of hypertension in 2008 in comparison with 1997. Overall, the number of cardiovascular risk factors in the recent cohort remained similar to that of the early cohort.

Data about trends in cardiovascular risk factors in the elderly, based on surveys of nationally representative samples in middle income countries, are scarce. In South Korea, the prevalence of smoking declined between 1998 and 2005 among men, but not among women. The prevalence of diabetes mellitus and of hypertension (both defined by the mean of biological measures or treatment) increased in both sexes between 2001 and 2005. But the prevalence of dyslipidemia (total cholesterol > 240mg/dL) decreased in the same period 4. In Brazil, a recent study based on a representative sample of nearly 40,000 elderly participants of the Brazilian National Household Sample Survey (PNAD) demonstrated a gradual increase in the prevalence of self-reported hypertension (44%, 49% and 53% in 1998, 2003 and 2008, respectively) and self-reported diabetes (10%, 13% and 16%, respectively). These trends persist, even after adjusted for sex, age and number of physician visits 10.

Recent studies have investigated the existence of cohort differences (i.e., a generation effect) in the prevalence of cardiovascular risk factors in the elderly. In this type of study, the prevalence of risk factors in the recent cohort (in order words, those elderly born most recently) are compared with a similarly aged cohort from an earlier period or vice versa. One example of this type of study was carried out in a rural area in England. Results from two waves of data collection of a cohort study of elderly were used. The earlier cohort was comprised of those who were 65 to 69 years old in 1991-1992 and the more recent cohort comprised those who fell within the same age rage five years later in 1996-1997 (about 600 subjects participated in each wave). No difference in the prevalence of hypertension or of diabetes mellitus between the two groups was observed, indicating the absence of a generation effect in what was only a five year interval 11. Another study conducted in Finland used a similar approach over 20 years. Data from three waves of a cohort study - each comprised of 200 to 300 elderly participants - for the years 1988, 1996 and 2008 were used. The earliest cohort was comprised of those who were 65 to 69 years old in 1988, and so on. No difference in the prevalence of self-reported diabetes or hypertension among the cohorts was observed 12.

This study sought to examine whether cohort differences exists with regard to the prevalence of cardiovascular risk factors among the older elderly in the Bambuí Cohort Study of Aging.

The study was conducted as part of the Bambuí Cohort Study of Aging, a population-based study conducted in Bambuí, a municipality with a population of 15,000, located in the state of Minas Gerais, in southeastern Brazil. The Bambuí Cohort Study of Aging procedures and the health profile of baseline participants have been described in detail elsewhere 13,14. Briefly, the baseline cohort population consisted of all residents who were age 60 and over on January 1st, 1997; they were identified by means of a complete census in the city. Baseline data collection was performed in 1997, including a standardized interview, blood tests, blood pressure measurements and others. The interview was repeated annually and other measures and procedures were repeated in selected years 13,14. All baseline participants aged 71 to 81 years in 1997 (i.e., born from 1916 to 1926), as well as all participants in the same age range (i.e, born from 1927 to 1937) who participated in the 11th wave - conducted in 2008 - were included in the present analysis.

The Bambuí cohort study was approved by the Ethics Research Committee of the Oswaldo Cruz Foundation (Fundação Oswaldo Cruz). Participants signed an informed consent form in 1997 and again in 2008.

Current smoking information was obtained by face to face interview in the subject's home. Blood pressure was measured at the Bambuí project field clinic in the early morning, after five minutes of rest, and at least 30 minutes after consumption of caffeine and/or use of tobacco. Three blood pressure measures were obtained at least two minutes apart using a standard protocol 15. All measurements were taken on the right arm with an appropriate size cuff, using a random zero Mercury sphygmomanometer (Tycos 5097-30; Tycos, Arden, USA) and stethoscope (Littmann Cardiology II, USA). Systolic and diastolic blood pressures were registered using as a reference the first and the fifth Korotkoff sounds, respectively. The first measure was ignored; we considered the blood pressure the average of the second and third measures.

Blood specimens were collected after a recommended 12 hour fast. Blood tests were performed at the project's central laboratory in Belo Horizonte. Serum levels of lipids were determined by enzymatic methods, using standard assay kits (Boehringer Mannhein, Ingelheim am Rhein, Germany). All lipid and glucose measures were performed using an automated analyzer (Eclipse Vitalab; Merck, Schiphol-Rijk, Netherlands). Medications used were verified by examining the packaging and/or the physician's prescription during the home visit. Medications were coded according to the Anatomical Therapeutical Chemical Index (ATC/DDD Index) 16 and were considered antihypertensives if they were classified in groups ATC: C02 - antihypertensives, C03 - diuretics, C07 - beta-blockers, C08 - calcium channel blockers, and C09 - agents that act on the renin-angiotensin system. All diabetes medications were classified in only one ATC group: A10. All measurements in 1997 and 2008 were performed in a similar way. The interviewer and technicians who measured blood pressure were trained and certified by a specialized team. The laboratory tests were supervised by credentialed clinical pathologists.

Current smokers were those who had smoked at least 100 cigarettes in their lifetime and were still smokers. Hypertension was defined by systolic blood pressure > 140mmHg and/or diastolic blood pressure > 90mmHg and/or anti-hypertensive treatment 17. Diabetes mellitus was defined by fasting blood glucose > 126mg/dL and/or treatment 18. The number of cardiovascular risk factors was defined by the sum (each = 1) of the following: current smoking, hypertension, diabetes mellitus and total cholesterol/HDL cholesterol ratio above the mean (> 5). None of the participants had a history of drug treatment for lowering lipids, and none had used these drugs during the period in which patients were evaluated. Thus, drugs for lowering cholesterol were not included in the present analysis.

The statistical analysis was based on prevalence ratios (PR) and 95% robust confidence intervals (95%CI) estimated by the Poisson regression. Those aged 71 to 81 years in 1997 (early cohort) were the reference category and those in the same age range in 2008 (recent cohort) were the exposure group. In the initial analysis, men and women were pooled and the PR and 95%CI were adjusted for sex. Subsequent analyses were stratified by sex. Statistical analyses were conducted using Stata 11.0 statistical software (Stata Corp., College Station, USA). All p values were 2-tailed (α = 0.05). 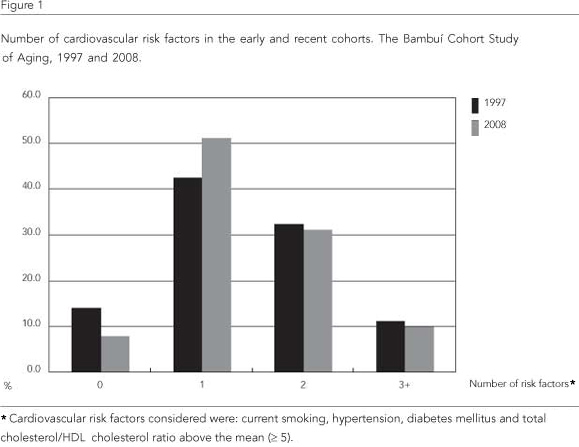 The results of this study show that the prevalence of hypertension and of diabetes mellitus was higher in the recent cohort than in the early cohort, independent of sex. Conversely, the recent cohort had a lower prevalence of smoking and a lower total cholesterol/HDL cholesterol ratio. Other parameters did not differ significantly between the early and recent cohorts. Analysis revealed a 136% increase in the pharmacologic treatment of diabetes and a 56% increase in pharmacologic management of hypertension from 1997 to 2008, which is consistent with national policies that have expanded access to publicly financed treatment of these two conditions 19.

Strengths of this study include the community-based sample, the standardized and systematic measures of parameters at baseline and at the 11th wave. Other strengths include the high response rate at baseline and minimal loss of participants to follow-up 13,14, reducing the likelihood of a selection bias in 1997 or in 2008. It should be noted, however, that this analysis was based on two studies of prevalence and it not possible to know whether the changes observed were due to changes in the incidence of investigated conditions or their duration.

In summary, the results of the present study revealed cohort differences in the cardiovascular risk factors in the population studied. Although some improvements have been observed - mainly the decline in smoking, increased treatment of hypertension and diabetes, and lower total cholesterol/HDL cholesterol ratio - the overall cardiovascular risk of the recent cohort remained similar to that of the early cohort.

This study was sponsored by FINEP, CNPq and FAPEMIG.

8. Puts MT, Deeg DJ, Hoeymans N, Nusselder WJ, Schellevis FG. Changes in the prevalence of chronic disease and the association with disability in the older Dutch population between 1987 and 2001. Age Ageing 2008; 37:187-93.