Birth cohort differences in anthropometric measures in the older elderly: the Bambuí cohort study of aging (1997 and 2008)

The aim of this study was to evaluate the effect of birth cohort on nutritional status among older elderly (71-81 years old) from the Bambuí Cohort Study of Aging, conducted in Brazil in 1997 and 2008. We compared the two birth cohorts - 1916-1926 (older cohort) and 1927-1937 (recent cohort) - considering body mass index (BMI = weight/height2), waist circumference (WC) and prevalence of overweight (BMI ³ 27kg/m2). BMI (β = 0.09, 95%CI: 0.04, 0.15) and prevalence of overweight (PR = 1.02; 95%CI: 1.01; 1.03) were higher in the recent cohort than the earlier cohort, regardless of sex and schooling. No difference was observed in WC. Stratified by sex, similar overall trends were observed for men, and WC was higher in the recent cohort. Among women there was no difference in BMI and overweight, but WC was lower in the recent cohort. The cohort effect was greater among older men and, in the near future, may result in greater prevalence of overweight in this group.

Brazil is aging rapidly. In 1950, with 2.1 million older adults, it ranked 16th in the world. By 2025 it is expected to stand sixth, with 31.8 million older adults, i.e., in 75 years the population over 60 years old will increase fifteen times, while the overall population will grow five-fold 1. While the population of elderly can be seen to grow steeply (2-4% per year), the younger population is growing more slowly 2. This rapid demographic transition signals a need to know more about the aging process, including nutritional state, among Brazilians 3,4. Population-based studies evaluating nutritional state among the elderly in Brazil are rare and limited to cross-sectional studies 5,6,7.

Generally speaking, overweight and obesity are reaching epidemic proportions worldwide. Rapidly increasing prevalence of overweight (body mass index - BMI > 25kg/m2) has been observed in many developed and developing countries, including Brazil. In the 1970s, prevalence of overweight in adults (> 18 years old) was 16.7% among men and 25.6% among women, rising in 1989 to 25.4% and 38.2%, respectively 8. A telephone survey conducted recently among Brazilian adults revealed that prevalence of overweight has continued to grow, rising from 42.7% in 2006 to 44.2% in 2008 9,10.

Flegal et al. 11 argued that explanations of the increasing prevalence of obesity must first consider overall social conditions, as well as cultural changes in the population. The hypothesis that historical changes take place, probably as a result of cultural, behavioral and environmental changes, can be sustained if consistent change is evidenced by birth cohort studies 12.

Cohort analysis is used to identify risks in specific birth cohorts, by furnishing information vital both to public health surveillance and to identifying the etiology and time trends of many diseases 13. A birth cohort groups individuals by year of birth, thus furnishing a single series from which it is possible to identify how the experiences of people born at one point in time differ from those born in a different period 14. When what is involved is an effect of age, then the changes in disease rates occur independently of birth cohort and calendar time 15. The variations are thus associated with chronological age, and caused by physiological changes, accumulated social experiences, changes in status and/or represent life-course developmental changes 16.

Given the scarcity of studies of the elderly population and the historical rise in overweight and obesity rates, this study examines whether there is a birth cohort effect on anthropometric measurements - BMI, overweight and waist circumference (WC) - in a population of older elderly resident in the community.

This study used data on the population-based cohort of older adults in Bambuí, Minas Gerais, Brazil, the details of which are available in previous publications 17,18.

The cohort baseline was established in 1997. All residents of Bambuí city (population ~15,000), 60 years old or older on 1 January 1997, were eligible for the study. Of the 1,742 residents in the age group studied, 92.2% (n = 1.606) participated in the baseline, which comprised interviews and biological measurements (including anthropometric evaluation, hematological and biochemical examinations, and measurement of arterial pressure). Baseline participants were monitored annually by interview and death certificate review. Other procedures, including anthropometric evaluation, were repeated in 2000, 2002 and 2008. In the first ten years of follow-up, 641 participants died and 6.9% were lost to follow-up 17,18.

Nutritional status was gauged from anthropometric measurements. For the present study, weight, height and WC were considered. All anthropometric measurements were taken three times by a trained team; for purposes of analysis, the mean was considered. The weight and height measurements were used to calculate BMI (weight/height2). Overweight in the older adults was defined as BMI > 27kg/m2, as recommended by the Nutrition Screening Initiative 19 and Lipschitz 20.

Student t-tests (for continuous variables) and Pearson chi-square test (for categorical variables) were used to examine differences in age, sex, years of schooling and anthropometric measurements between the two cohorts. Regression models were adjusted for the comparisons between the two birth cohorts in terms of anthropometric variables. For the continuous variables (BMI and WC), a linear regression model was adjusted, and the coefficients and their respective 95% confidence intervals were obtained. For the variable "overweight", the analysis was based on prevalence ratio (PR) and robust confidence interval (95%CI) estimated by Poisson regression. Birth cohort was considered an independent variable, with the older cohort (1916-1926) considered the reference category, and the recent cohort (1927-1937), the exposure category. Initially, the analyses were performed for all participants, and the model was adjusted for sex and years of schooling. Subsequently, stratified analyses were performed by sex, and the model was adjusted for years of schooling.

The population-based cohort study of older adults from Bambuí was approved by the Ethics Research Committee of the Oswaldo Cruz Foundation (Fundação Oswaldo Cruz), Rio de Janeiro, Brazil. All participants signed a Declaration of Free, Informed Consent, which was renewed at all years of follow-up. 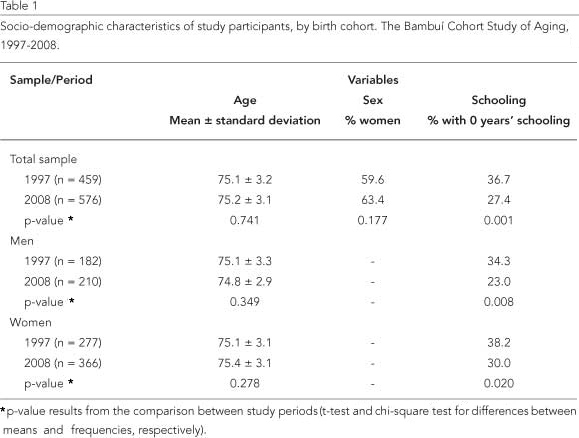 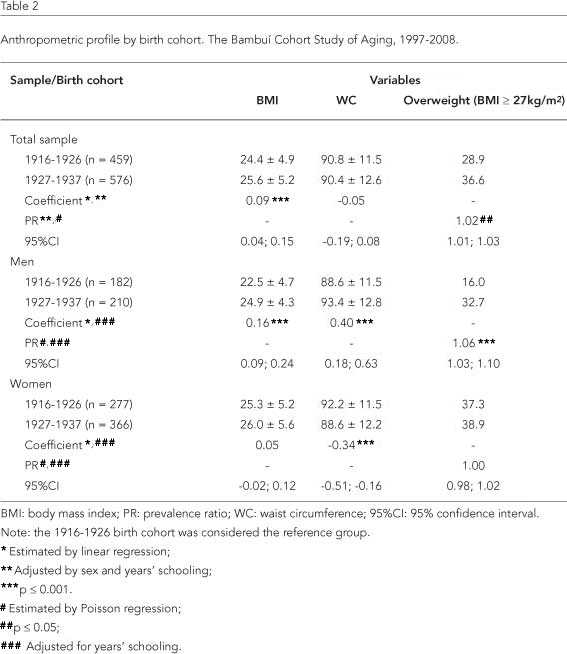 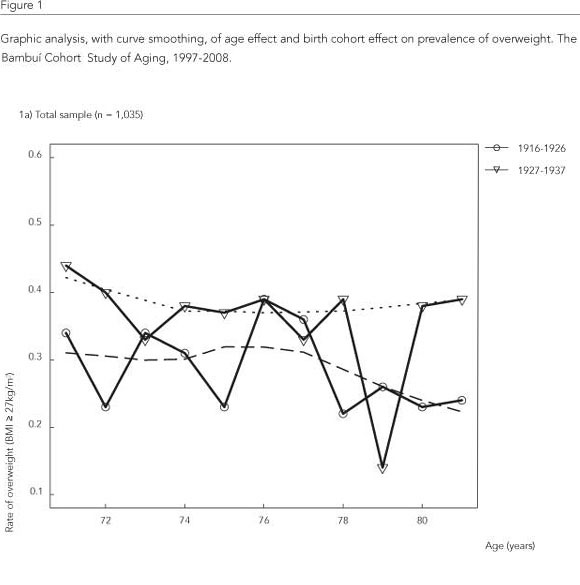 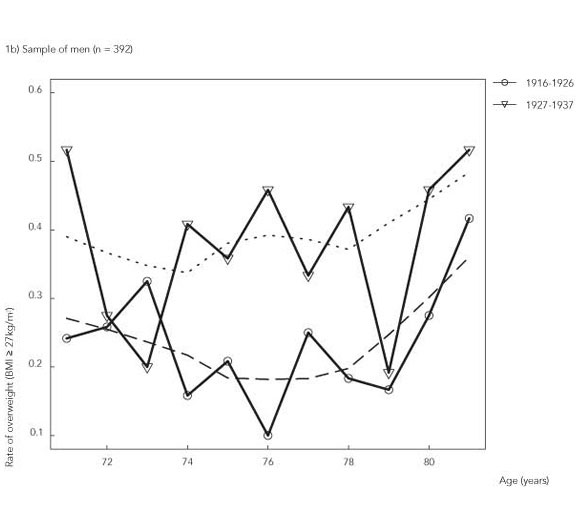 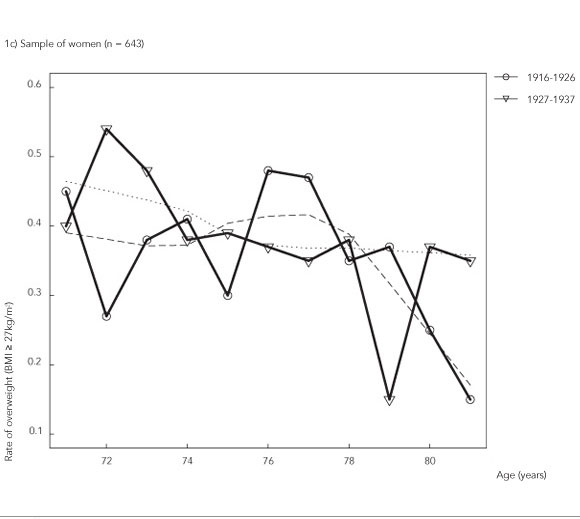 Anthropometric profiles were observed to differ between older adults in the same age range (71-81 years), born in different periods. Individuals in the more recent birth cohort (1927-1937) showed greater weight gain both in mean BMI and in prevalence of overweight as compared with individuals born in the older cohort (1916-1926). The effects of both birth cohort and age on anthropometric profile seem to have been greater among men than among women.

Despite the scarcity of international and Brazilian studies examining the evolution of body composition over time 5,6,7,21,22, particularly in the elderly population 23, some comparisons can be made. The findings of this study are consistent with the literature as regards the greater prevalence of overweight and obesity among women. In both 1997 and 2008, prevalence of overweight (BMI > 27kg/m2) was greater among women (37.3% in 1997 and 38.9% in 2008) than among men in the same years (respectively, 16% and 32.7%). Comparable prevalences were also even encountered in studies that used different classifications for overweight/obesity in older adults, such as Eiben et al. 23, which considered obesity as given by BMI > 30kg/m2, and Menezes & Marucci 24, which assessed overweight/obesity in terms of BMI percentiles.

It is argued that such differences are probably due to biological considerations relating to men's greater tendency to accumulate lean mass and, among women, relating to menopause accompanied by increased weight and adiposity 3. However, although biological factors do favor weight gain, it has to be understood whether other factors - such as social conditions, environment, behavior and habits acquired over life course with changing paradigms of health and illness - have affected how the profile of nutritional status has evolved historically in a given population.

Accordingly, changing contemporary effects of the environment can be assessed by way of birth cohort effect 13, as proposed by this study. Considering that schooling 12 and sex 23,24 are associated with nutritional status, the anthropometric profile of the study population was ascertained in two birth cohorts (1916-1926 and 1927-1937), and adjusted for sex and years of schooling.

Older adults born into the more recent cohort (1927-1937) showed a higher mean BMI and also greater prevalence of overweight. This finding matches those observed by some other authors studying secular trend towards adult obesity, who point to greater prevalence in more recent birth cohorts 13,16, and highlight even more marked increases among those born since the 1960s 16.

The trend observed here is consistent with assertions that more recent birth cohorts tend to adapt more quickly to cultural and technological changes 16. Individuals born in 1927-1937 spent part of their childhood and adolescence in a period (the late 1940s) that was marked by major demographic, epidemiological and nutritional changes. At that stage of life, habits and behavior are strongly defined, and very often persist into adult life 25.

Considering that the differences between birth cohorts are related to historical changes from either changing cultural, behavioral or environmental circumstances 12, secular trends in anthropometric changes can be expected to differ by sex, given that women tend to access health services more 26, and to change their patterns of diet and physical activity more quickly than men 27.

Stratifying by sex, it was observed that men born in the more recent cohort displayed greater mean BMI, waist circumference and prevalence of overweight than men born in the older cohort. Among the women, meanwhile, there was no difference between the birth cohorts in terms of mean BMI and prevalence of overweight, even given smaller waist circumference in the more recent cohort.

Studies examining cohort effect on nutritional status in adults present similar findings. A study in Finland on BMI trend by birth cohort demonstrated that obesity affected middle-aged men more, but had limited impact on women: from 1972 to 1997, BMI was observed to increase 1.96 units among men and only 0.32 among women 28. In that same direction, a study in Sweden of a population in their 70s, born between 1901 and 1930, investigating differences in anthropometric measurements among different cohorts, found higher mean weight, BMI, WC, prevalence of overweight (BMI > 25kg/m2) and obesity (BMI > 30kg/m2) in more recent cohorts for both sexes, although the impact was greater among the men 23. As in our study, however, other authors studying different birth cohorts have identified differences in BMI among men only 29,30.

This study has advantages and limitations. The advantages include the study population base, the long time span (11 years) of the comparison, the high response rate at both data collection points (which was apparently not affected by age, sex or schooling), and the strict standardization of the measurements taken in 1997 and 2008. The main limitation of the study is its cross-sectional analysis, which does not allow the evolution of anthropometric measurements in the same individuals, nor the determinants of any such changes, to be examined.

In spite of these limitations, this exploratory study addresses unprecedented questions regarding overweight trends and related measurements in a Brazilian population of older elderly. Further investigations are necessary to examine the determinants of anthropometric changes among older adults and the related sex differentials, particularly considering the historical evolution of the health-illness process in each population.

The increase in BMI is directly related to increase in morbid-mortality and worse quality of life and, in the elderly, is associated with mobility and preservation of mental state 31. In addition, preliminary information suggests increasing prevalence of arterial hypertension and diabetes mellitus among elderly participants of the recent birth cohort 32, reinforcing once again the need for further studies directed to understanding the determinants of such trends better.