Birth cohort differences in hypertension control in a Brazilian population of older elderly: the Bambuí cohort study of aging (1997 and 2008)

Worldwide, arterial hypertension is the main risk factor for mortality and the third most important cause 1 of years lived with disability. Prevalence of arterial hypertension is high in the overall population, and increases markedly with age. It is the most common chronic disease among older adults, with prevalence of 60% or more, both in high-income countries and in Latin America and the Caribbean 2. The World Health Organization (WHO) estimated in 2002 that at least 50% of cardiovascular diseases and 75% of strokes result from high blood pressure 3. Because of its high prevalence and severe consequences, efforts have been made worldwide to increase detection and control of existing arterial hypertension 4,5,6,7.

The present study used baseline and 11th wave data on the Bambuí cohort mentioned above, in order to examine for birth cohort differences in prevalence of appropriate control of arterial hypertension among older elderly adults, and in associated factors.

The cohort study has being conducted in the town of Bambuí (population approximately 15,000), in Minas Gerais State. The cohort baseline was established in 1997, since when follow-up is performed annually on all participants by interview and death certificate review. Measurement of arterial pressure and other biological measures were taken at the baseline and at 2000, 2002 and 2008 follow-up. Further details are available in previous publications 13,14.

When the cohort baseline was established, the town of Bambuí had one 62-bed hospital, 15 doctors (1 per 1,000 population), and a polyclinic that offered 24-hour emergency care. In 2003, the Family Health Strategy (FHS) was introduced in the town, for which four teams were set up. In 2006, two further teams were added to the program, and drug distribution began under the FHS.

The Bambuí cohort study of older adults was approved (for initial procedures) by the Ethics Research Committee of the Oswaldo Cruz Foundation (Fundação Oswaldo Cruz - Fiocruz), Rio de Janeiro, and (for procedures not contemplated in the original project) by the Ethics Research Committee of the René Rachou Research Center of Fiocruz (Centro de Pesquisas René Rachou), Belo Horizonte. Baseline participants signed a free, informed consent form, which was renewed at all study follow-up points.

The population for the baseline cohort was identified by means of a complete census of the town performed in November and December 1996. Of the 1,742 residents aged 60 years or more on 1 January 1997, 1,606 participated at the baseline and 1,492 had their arterial pressure measured. Loss to follow-up in the first ten years was 6% 13,14.

For the present study, all hypertensive participants aged from 71 to 81 years at the baseline and at 11th year follow-up were selected (that is, those born in 1916-1926 and in 1927-1937, respectively). Hypertension was considered to be given by systolic pressure > 140mmHg and/or diastolic pressure > 90mmHg, and/or anti-hypertensive drug use 15.

Measurements of arterial pressure and drug use

Three measurements of arterial pressure were taken at 2-minute intervals, after 5 minutes rest, with the individual seated and with the arm supported at heart level. These measurements were taken in a quiet, isolated room with controlled temperature. The first was taken after at least 30 minutes without drinking coffee or smoking. Arterial pressure was considered to be the mean of the second and third measurements 15. The following instruments were used: Tycos 5097 sphygmomanometers (Welch Allyn Tycos 5097-30, Tycos, Arden, USA) and Littman Cardiology II stethoscopes (3M Medical Devices, St. Paul, USA). Arterial pressure was measured at Fiocruz advance post in Bambuí by trained technicians. The technicians' training included use of videos, double auscultation, and exercises to gauge inter- and intra-observer variability. The same procedures were followed in 1997 and 2008.

Other variables considered in this study were: age, sex, schooling (complete years), leisure-time physical activities, current smoking, number of medical appointments in the previous 12 months, history of medical diagnosis for arterial hypertension, and body mass index (BMI). Sufficient leisure-time physical activity was defined by the participant's reporting having performed exercises of any intensity for at least 20-30 minutes, three times or more a week in the previous 90 days. Tobacco use was defined as consumption of at least 100 cigarettes ever, and continuing with the habit at present. Participants were considered to know they suffered from hypertension if they reported having been so informed by a doctor. BMI was defined as weight over height squared. Further details are available in previous publications 13,14.

Controlled arterial hypertension was defined by values of systolic and diastolic pressure of less than 140 and 90mmHg, respectively, among those using anti-hypertensive drugs 15.

Unadjusted analysis was based on the Pearson chi-square test, Student t-test and Mann-Whitney test for differences in frequencies, means and medians, respectively. Analysis of the factors associated with appropriate control of arterial hypertension was based on prevalence ratios (PRs) and 95% confidence intervals (95%CI) estimated by Poisson regression with robust variance. All analyses were performed using Stata 11.0 software (Stata Corp., College Station, USA).

The study participants' characteristics are shown in Table 1. The two cohorts did not differ in mean age or the proportion of women. In the more recent cohort (born 1927-1937), as compared with the previous one (born 1916-1926), significant increases were observed in the proportion of those with 4 years' or more schooling, and of those with sufficient leisure-time physical activity, in addition to an increase in mean BMI and median number of medical appointments in the previous 12 months. Prevalence of smoking use halved (from 16% to 8.9%). Among the older adults of the more recent cohort, there was a greater prevalence of those who knew they were hypertensive than in the earlier cohort (81.2% against 70.9%) and of those who used anti-hypertensive drugs (90.7% against 74.4%). 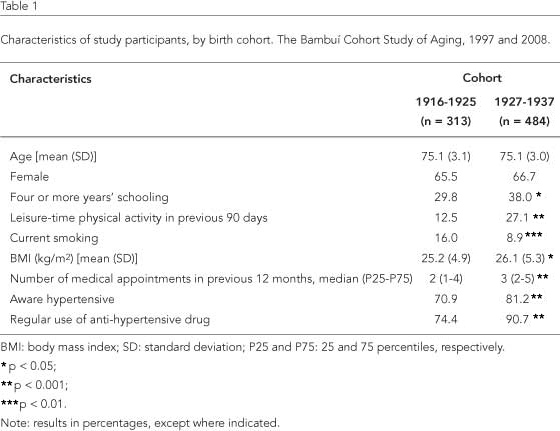 Table 2 shows the values of systolic and diastolic pressure by birth cohort and sex. In joint analyses for both sexes, no statistically significant differences (p > 0.05) were observed between the cohorts in prevalence of arterial pressure controlled at levels below 140/90mmHg (44.6% and 40.1%, respectively) or at levels below 160/100mmHg (76.8% and 74.9%, respectively), or in mean systolic pressure (143.4mmHg and 145.6mmHg, respectively). These results were observed consistently among men and women. Mean diastolic pressure was lower in the more recent cohort (79.5 mmHg) than in the older cohort (82.5mmHg); and that decrease was observed among the men, but not among the women. Table 3 shows the results of multivariate analysis of the factors associated with appropriate control of arterial hypertension stratified by birth cohort. Only four or more years' schooling showed an independent association with appropriate control of arterial hypertension, and that association was observed consistently in the two cohorts (PR = 1.34; 95%CI: 1.00-1.79 and PR = 1.26; 95%CI: 1.00-1.58, respectively). Sex, leisure-time physical activity, current smoking use, BMI and number of medical appointments in the previous 12 months showed no significant associations with appropriate control of arterial hypertension [PR (95%CI)], ranging from 0.89 (0.68-1.17) to 1.26 (0.90-1.76) in the older cohort, and PR adjusted for sex (95%CI) ranging from 0.85 (0.54-1.34) to 1.28 (0.87-1.87) in the recent cohort.

One explanation for the association between more schooling and appropriate control of arterial hypertension may be improved understanding and assimilation of medical prescription and its importance 21,22. The association with schooling observed in this study is consistent with previous observations made among participants in the Bambuí cohort of older adults. A qualitative study showed that people were generally clear about the need for treatment to control arterial pressure. However, although most of the participants reported that they followed the treatment, it was clear from their accounts that many of them did not follow their medical prescription correctly. Overall, it was clear from the accounts that the absence of symptoms led many of them to feel they were not ill, and accordingly to underestimate the importance of continuing to use the medication. Thus, medication was often interrupted and resumed only with the advent of symptoms which, in their view, indicated increased arterial pressure 23. Such behavior may explain, at least partially, the persistence of poor pressure control in the population studied.

This study has advantages and limitations. The advantages include the population base and the standardization of methods and data collection at the baseline and 11th year follow-up. One further advantage was the low level of participant loss to follow-up, which reduced the likelihood of non-participation bias. Meanwhile, the response rate for arterial pressure measurements was slightly higher in the 1997 survey (93%) than in 2008 (88%), and that may in some way affect the estimated prevalence of appropriate control of arterial hypertension. However, a sensitivity analysis showed that the results obtained would not be affected even if all non-participants in the 2008 survey had appropriately controlled arterial pressure (p = 0.196; details not shown). Lastly, it must be emphasized that this study was conducted using the population of the Bambuí cohort of older adults, and the results may not be generalizable to other elderly populations.

Lack of success in controlling arterial pressure at appropriate levels, in spite of advances in drug therapy and access to treatment, is a phenomenon that has recently be termed the "hypertension paradox" 24. The persistence of low levels of controlled arterial hypertension in this study occurred in a context of improved schooling, health-related behavior, awareness of the condition of being hypertensive, use of anti-hypertensive drugs, and number of medical appointments. These results show that these improvements were not enough to increase appropriate control of arterial hypertension in the population studied. The results underline the need for complementary measures - possibly to increase adherence to treatment - in order to improve control of existing arterial hypertension.

J. O. A. Firmo conceived the project, participated in data collection, analysis and interpretation, drafted the article and approved the final version. S. V. Peixoto and A. I. Loyola Filho participated in the analysis, interpretation of results and critical analysis of the article. E. Uchôa and M. F. Lima-Costa contributed to project conception, data collection, and critical review and final approval of the article.

To FINEP, CNPq and FAPEMIG for funding this study.