The aim of this study was to verify whether pregnancy was a risk factor for death in influenza A (H1N1)/2009 infection. We compared the case-fatality rates for pandemic influenza among non-pregnant women of childbearing age and pregnant women, besides investigating other factors that differentiated the groups in relation to the outcomes. The data were collected from the National Information System on Diseases of Notification (SINAN), of the Ministry of Health. The study used cases with laboratory confirmation and included 1,861 women from 10 to 49 years of age, of whom 352 were pregnant. The case-fatality rate during the 2009 pandemic was 4.5% for pregnant women and 6.4% for non-pregnant women (p = 0.197). Logistic regression did not show an association between pregnancy and death (OR = 0.7; 95%CI: 0.41-1.21). However, there were significant differences between the two groups in relation to mean age, treatment with oseltamivir, schooling, and presence of other risk factors.

Influenza virus infection usually presents mild symptoms, with clinical recovery in a few days. However, the symptoms can become worse in children and the elderly and in the presence of associated risk factors, comorbidities, and pregnancy 1.

In previous influenza pandemics, pregnant women showed a higher morbidity and mortality compared to non-pregnant women 2. They can also suffer more miscarriages and premature deliveries, especially in the presence of pneumonia 3.

The factors that make pregnant women more susceptible result from physiological alterations proper to gestation that occur in the cardiovascular, immune, and respiratory systems 4. In addition, the third trimester is characterized by compression of the visceral structures by the gravid uterus (which can restrict respiratory function) and hypervolemia, which decreases the capacity for hemodynamic adaptation in case of sepsis 5.

Given the emergence of a new viral variant, the aim of this study was to evaluate pregnancy as a potential risk factor for death in pandemic influenza A (H1N1)/2009.

This was an observational cross-sectional study whose data source was the Registry of Information on Pandemic Influenza (H1N1)/2009 in the National Information System on Diseases of Notification (SINAN) of the Brazilian Ministry of Health.

The study population consisted of childbearing-age women living in the State of Paraná, Brazil. Childbearing age followed the Ministry of Health's standard definition, namely 10 to 49 years 6.

The sample included all cases with laboratory confirmation by RT-PCR (reverse transcription polymerase chain reaction) and without inconsistencies or missing data.

Other variables included age, presence of a known risk factor for aggravation of influenza highlighted on the SINAN reporting form, use of oseltamivir, hospitalization, and dates of onset of symptoms, beginning of treatment with oseltamivir (when treated), and of death (when it had occurred). Data on use of oseltamivir were obtained from the observations section on the reporting form. This section, for open-ended observations, included information on the use of oseltamivir or lack thereof. Forms with no information on treatment were excluded from the analyses on this antiviral drug.

The statistical analysis aimed to compare the case-fatality rates in pregnant versus non-pregnant women, using logistic regression with odds ratio (OR) as the measure of association for the occurrence of death as the outcome; the comparisons of distribution of risk factors between pregnant and non-pregnant women and between deaths and non-deaths used the chi-square and Student's t tests and measures of central tendency. The study also attempted to establish a possible association between risk factors and death as the outcome, by logistic regression, and finally to verify whether there was a significant difference in survival times between pregnant and non-pregnant women, by Kaplan-Meier analysis. The study used SPSS 17.0 (SPSS Inc., Chicago, USA), with statistical significance set at p < 0.05.

The research project complies with the principles contained in the Declaration of Helsinki, meets with Brazil's specific legislation, and was approved by the Institutional Review Board of the Health Sciences Research Division, Federal University in Paraná (Setor de Ciências da Saúde, Universidade Federal do Paraná).

A total of 2,527 female patients were identified who acquired de novo influenza, pandemic subtype, during the year 2009 in the State of Paraná, presenting laboratory confirmation by RT-PCR, and whose reporting forms did not display inconsistencies. Of these, 1,861 fit the classification for women of childbearing age; 352 (18.9%) were pregnant and 1,509 (81.1%) not pregnant. A total of 16 deaths due to complications of influenza were recorded in pregnant women and 96 in non-pregnant women.

Table 2 shows the cure rates and death rates in pregnant and non-pregnant women according to presence of each characteristic related to risk factors.

In both groups, deaths were significantly more frequent among women with comorbidities versus those without any other associated disease.

Having acquired the infection during the pregnancy was not associated with death in women of childbearing age in the State of Paraná during the 2009 pandemic (OR = 0.7; 95%CI: 0.41-1.21), as shown in Table 3. Use of oseltamivir, as a protective factor, contributed substantially to modification of the outcome (OR = 0.02; 95%CI: 0.01-0.06). The presence of a risk factor increased the odds of death by 2.2 times, and the odds of death increased by 75% for each associated comorbidity. 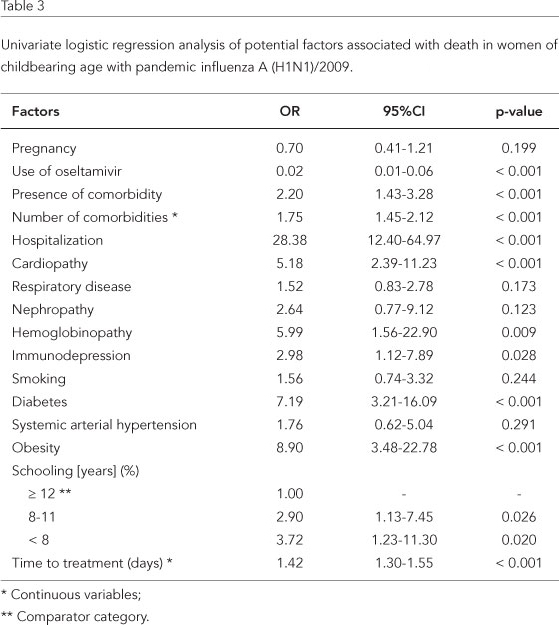 The need for hospitalization was associated with an increase in the risk of death, as were the comorbidities cardiopathy, hemoglobinopathy, immunodepression, diabetes, and obesity. The OR values for schooling suggest an increase in the risk of death among patients with less schooling as compared to those with university education. In relation to time until initiating treatment, the results indicated a 42% increase in the odds of death for each additional day between the onset of symptoms and beginning of treatment with oseltamivir.

The findings did not provide sufficient evidence to associate pregnancy with worse prognosis in influenza, since the risk of a pregnant woman evolving to death was not significantly different from that of a non-pregnant woman of childbearing age.

However, this result may be related to the study's characteristics. A secondary database was used (SinanWeb; http://portalweb04.saude.gov.br/influenza/default.asp) rather than data obtained directly from the patients or from their charts, and the small number of deaths in the groups limited the comparisons. In addition, the non-pregnant women showed a lower treatment rate, and when treated, the medication was initiated later. Meanwhile, the larger number of pregnant women treated with oseltamivir may have been the key factor for the better outcome in this group. Pregnant women were allotted greater priority for treatment as compared to non-pregnant women, possibly thanks to previous evidence of pregnancy as a risk factor in influenza. Thus, treatment was more common and was initiated earlier in pregnant versus non-pregnant women, which may have altered the case-fatality rate.

Despite these limitations, it was possible to show that the presence of comorbidities (especially diabetes and obesity) in association with influenza infection was the main factor related to death as the outcome in women of childbearing age, thus corroborating the results of other studies 7,8,9.

Despite not having shown an association between pregnancy and death, infection with the pandemic influenza A (H1N1)/2009 virus in pregnant women should be monitored carefully, especially in the presence of risk factors.