Polysomnography (PSG) is the gold standard for OSA diagnosis 15. Nonetheless its availability is still limited worldwide. To circumvent this limitation, questionnaires have been developed to screen for OSA 16. They are easily administered, inexpensive, applicable in large surveys, and useful for screening a diagnosis of OSA. The Berlin Questionnaire (BQ) was designed to identify individuals at higher risk of having OSA in primary care. The BQ includes questions on obesity, hypertension, snoring, daytime sleepiness and fatigue 17. We demonstrated that a positive response to the questionnaire was independently associated with resistant hypertension 18.

We hypothesized that an association between OSA and coronary artery disease can be detected by the BQ. As of this date, this method has not yet been employed in this setting.

This is a case-control study. Cases were patients referred for elective coronary angiography for diagnostic purposes. Patients had class I to II stable angina or had an evidence of ischemia in non-invasive testing. Patients with prior treatment of coronary artery disease by angioplasty or surgery, current or previous malignancies, chronic disabling disease, or major surgery in the last two years were excluded. Cases were additionally classified according to severity of coronary artery disease by quantitative digital angiography in patients with or without significant lesions, defined as > 50% stenosis in major epicardial vessels or their branches.

Controls were selected from a population-based study that investigated 1,858 adult residents randomly selected from the city of Porto Alegre, Rio Grande do Sul State, Brazil. Details of this study are described elsewhere 19. Among 1,210 individuals aged 40 years or older, a random sample of 439 individuals matched to the cases, by age and gender, were selected. Controls with history of cardiovascular disease (defined by a medical history of myocardial infarction, artery failure, stroke or coronary artery bypass grafting and self-reported angina pectoris) were excluded.

Cardiovascular risk factors, socioeconomic and demographic characteristics were assessed using the same standardized questionnaire both in the control group and case individuals. Interviews were conducted by certified investigators. Skin color was defined by the referred race of the ascendants 20. Smokers were characterized by lifetime consumption of at least 100 cigarettes, and pack-years of smoking were calculated by multiplying the daily number of packs smoked and number of years of smoking 21. Abusive consumption of alcoholic beverages was defined by an average daily intake > 30g of ethanol for men and > 15g ethanol for women 22.

Blood pressure was measured with an OMRON device, model CP-705 (OMRON Co. Ltd., Dalian, China), with the patient sitting, and the average of three measurements was used in the analyses. Hypertension was defined as systolic pressure > 140mmHg, diastolic pressure > 90mmHg or use of blood pressure-lowering medications. Diabetes mellitus was defined by a history of a physician's diagnosis of diabetes or use of antidiabetic agents.

Anthropometric assessment was performed with the participant wearing light clothing without shoes. The average of two or three measurements was used in the analysis. Weight and height were measured in a scale to the nearest 100g with a scale (model TINN 00088; Plenna S.A., São Paulo, Brazil), and height (cm) was measured maintaining the Frankfurt plane, to the nearest 0.1cm. Waist circumference was measured at the midpoint between the lower costal rib and superior iliac crest. Body mass index (BMI) was calculated as [weight (kg)/height (m)2].

Controls were interviewed during a home visit, as part of a larger study 19. Case patients answered the BQ, read by the investigators, after catheterization. When possible, wives and husbands of the case patients and the controls helped to answering the questions.

The BQ is composed of three categories of symptoms, five questions are related to snoring and cessation of breathing in category 1, four questions are related to daytime sleepiness in category 2; there is a question about high blood pressure and also a question about the BMI in category 3. In category 1 and 2, high risk was defined as persistent symptoms (> 3-4 times/week). In category 3, high risk was defined by the presence of hypertension (> 140/90mmHg or use of medication) or a BMI > 30kg/m2. Patients and control subjects were classified as having high risk for OSA if scores were positive on two or more categories.

Coronary angiography was performed by transfemoral access, according to the Seldinger technique, using Axion Artis equipment (Siemens, Munich, Germany) by experienced interventional cardiologists. The diagnosis of significant lesions was established by quantitative analysis of the major epicardial vessels - branch, anterior descending artery, circumflex and right coronary artery - and branches with a diameter > 3mm - obtuse marginal arteries, posterolateral, first diagonal, diagonal second, apical and posterior descending. Evaluation of the images was done independently by two cardiologists and disagreements were settled by a third interventional cardiologist. Stenosis was detected, as well as the percentage of stenosis in relation to the diameter, through digital quantitative analysis. Significant coronary artery disease was defined as stenosis > 50% in at least one epicardial coronary artery.

The sample size was calculated to detect an odds ratio (OR) of at least 2.0 with p α = 0.05 and 80% power, assuming a prevalence of BQ positives of 35% in the controls and 50% in the cases, with a ratio between controls and cases of 2.5:1. Thus, the required sample size was 126 cases and 315 controls. In order to maintain the power in the multivariate analysis, the sample size was increased to 328 cases and 439 controls. The differences between means were compared using Student's t-test. Chi-square test was used to compare proportions. T-test and ANOVA were employed to test for differences between the cases classified with significant and non-significant coronary lesions, and controls. Odds ratios and confidence intervals for significant lesions in the high-risk BQ were calculated in a multinomial regression analysis, adjusting for age, gender, skin color, education, smoking, alcohol beverage consumption and diabetes mellitus. This method enables calculating odds ratios of a dependent-variable with more than two categories. The categories were cases with significant and non-significant lesions in the coronary angiography. Analyses were conducted using the Statistical Package for Social Sciences (version 16.0; SPSS Inc., Chicago, USA).

The study was approved by the Ethics Committee of Porto Alegre Clinics Hospital (Hospital das Clínicas de Porto Alegre) which is accredited by the Office of Human Research Protections as an Institutional Review Board. All participants signed an informed consent form.

The flow chart of the selection of cases and controls is presented in the Figure 1. A total of 328 individuals referred for coronary angiography, aged 36 to 82 years, were characterized as cases and classified by the presence or absence of significant stenosis. The reasons for coronary angiography included; angina pectoris in 54.9% of cases, a previous acute myocardial infarction (15.2%), chest pain with positive exercise testing (16.5%) or positive nuclear myocardial perfusion scan (2.1%), dyspnea precipitated by exertion (3.3%), atypical chest pain (0.8%), abdominal pain on exertion (0.4%) and other indications (6.5%). Of the 328 cases, 167 had no significant lesions (< 50% stenosis) and 161 had significant lesions (> 50% stenosis) in at least one epicardial coronary artery.

Demographics and other characteristics of cases and controls are showed in Table 1. There were no significant differences between groups in distribution of gender and smoking. Cases had higher systolic and diastolic blood pressure, age, BMI, waist circumference and prevalence of hypertension and diabetes. Cases had fewer years of formal education. The proportion of individuals with a positive BQ was higher in the cases than in the controls (41.2% vs. 34.4%; p = 0.03). 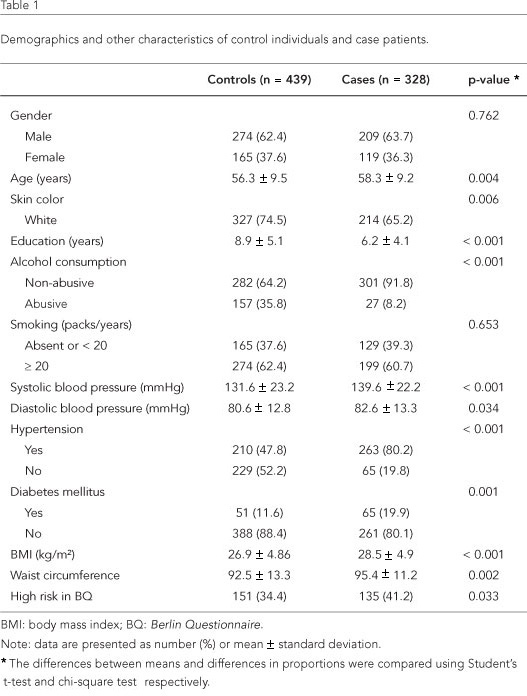 In stratified analyses, the risk for OSA detected by the BQ was higher in individuals aged 40-59 years and in women (Table 2). Table 3 shows the OR for coronary artery disease when OSA is identified by the BQ, stratified by age and gender. In both crude and adjusted multinomial regression analysis, patients 40-59 years old and women identified as high risk by the BQ were more likely to have significant coronary lesions. 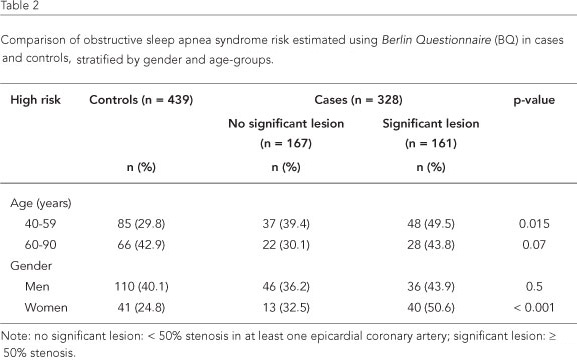 In Table 4, multinomial logistic analysis showed that individuals with a BQ positive result for OSA had an OR (71% higher risk) of displaying significant coronary lesions. Adjusting for age, gender, skin color, education, smoking, alcohol beverage consumption and diabetes, the effect of a positive BQ for risk of coronary lesions was still significant (OR = 1.53, p = 0.04). Hypertension and excess of adiposity, associated with OSA in the univariate analysis, were not included in the model because they are part of the BQ. Individuals without significant lesions had odds ratios not significantly different from that of the controls in any model (Table 4).

Women are less likely than men to report typical snoring and symptoms of apnea 45. There is also a tendency to delay suspicion and diagnosis of coronary artery disease in women 46. The lower suspicion of OSA identified by the BQ in women, was associated with the higher prevalence of abnormal angiograms in women (85.9 vs. 73.7% in men) and may explain the higher risk for coronary artery diseasein women with a positive BQ than that identified in this survey. The gender difference in OSA prevalence is negligible after the age of 60 years 2,47. The OSA identified by the BQ and suspicion of higher risk for significant coronary artery disease in individuals aged 40-59 years age group suggests that OSA is more important in younger individuals. At older ages, other risk factors for coronary heart disease may prevail in the causation of atherosclerosis,making the risk added by OSA in elderly individuals undetectable by the BQ.

Our study has limitations that deserve attention. The BQ is a screening test for the high risk of OSA and should not replace a full OSA investigation 48. On the other hand, the use of the BQ as screening for OSA is feasible and may help to increase the diagnosis of OSA in patients with suspected coronary artery disease 49. Since controls were not submitted to coronary angiography, the possibility they had subclinical coronary atherosclerosis remains and could be a measurement bias. Nonetheless, this possibility is unlikely, since controls never had a suspicion of having coronary artery disease (the main criterion for being a case in our investigation). The lack of evaluation of lipid profile in cases and controls is a potential source of bias, but there was no reason to suspect that the prevalence of lipid disorders was any different between individuals with and without OSA. The case-control design precludes establishing the temporal association. OSA may be the cause of coronary artery disease and vice-versa. The bulk of evidence, including longitudinal studies, suggests that the first option is more plausible.

We would like to thank the CNPq-INCT-IATS, CAPES and FIPE-HCPA for their financial support.

44. Hiestand DM, Britz P, Goldman M, Phillips B. Prevalence of symptoms and risk of sleep apnea in the US population: results from the national sleep foundation sleep in America 2005 poll. Chest 2006; 130:780-6.