Trends in self-reported arterial hypertension in Brazilian adults: an analysis of data from the Brazilian National Household Sample Survey, 1998-2008

This study investigated the time trend in self-reported arterial hypertension from 1998 to 2008 in individuals older than 20 years in Brazil. Data were analyzed on prevalence of hypertension from the National Household Sample Survey (PNAD) for the years 1998, 2003, and 2008. The analysis considered the sampling complexity and included 203,419, 238,591, and 257,816 individuals in the years 1998, 2003, and 2008, respectively. The time trend in hypertension was analyzed by sex, family income, geographic regions of Brazil, and area of residence (urban versus rural), and the prevalence rates were adjusted for age. Prevalence of self-reported hypertension was 12.5% in 1998, 13% in 2003, and 13.9% in 2008, with an annual increase of 1.07%. The highest increases occurred in the Southeast Region (1.41%), in men (1.82%), and in urban areas (1.15%). The study showed a rise in the prevalence of self-reported hypertension in all income brackets and with increasing age. Knowledge of the prevalence of hypertension is essential for backing activities to prevent and control the problem, especially among the more vulnerable subgroups.

Systemic arterial hypertension (SAH) is a risk factor for cardiovascular, cerebrovascular, and renal diseases and accounts for some 40% of deaths due to stroke and 25% of deaths from coronary artery disease 1,2,3. SAH affects more than 30 million Brazilians, with an annual treatment cost of approximately US$ 398.9 million for the public Brazilian Unified National Health System (SUS) and US$ 272.7 million for the private healthcare system, representing 1.11% of overall healthcare expenditures 4. Negative effects have also been reported on quality of life for individuals with SAH, including physical, functional, emotional, and mental problems and various forms of pain 5.

The study was conducted with data from the health supplements included in the PNAD in 1998, 2003, and 2008. PNAD is a survey conducted by the Brazilian Institute of Geography and Statistics (Instituto Brasileiro de Geografia e Estatística - IBGE) and whose objective is to furnish basic information on the country's socioeconomic development. The survey has been conducted every five years since 1998 and has included a health supplement that provides a five-year historical series with national population-based information on health conditions and access, utilization, and financing of health services in Brazil 17.

The sampling plan in the PNAD is conducted in up to three stages (municipalities or counties, census tracts, and households), thereby guaranteeing the sample's representativeness for the country, geographic regions, States, and some metropolitan areas 18. The sample consisted of 344,975, 384,834, and 391,868 individuals in 1998, 2003, and 2008, respectively. Additional information on methodology and sampling can be found on the IBGE website 19,20.

The current study population consisted of individuals 20 years of age or over. The question "Has a physician or other health professional ever said (...) that you have arterial hypertension (high blood pressure)?" was used to estimate the prevalence of self-reported arterial hypertension for each year. The variable was used dichotomously, as a "yes" or "no" answer.

The databases were obtained from the IBGE. Data were analyzed in the Stata software, version 11.0 (Stata Corp., College Station, USA), using the svyset command to define the sampling weights and clusters and the svy prefix for all the analyses, given the complexity of the sampling process. Prevalence rates for self-reported arterial hypertension were estimated for Brazil and its geographic regions, as well as annual percentage ranges. This information was also stratified by area of residence and sex. The prevalence rates for systemic arterial hypertension were adjusted for age.

where p1998 and p2008 are the prevalence rates calculated for the years 1998 and 2008, respectively. The statistical test used to verify the time trend was the Wald test for linear trend.

Table 1 shows the sample's characteristics for each year of the PNAD. In all three years there was a slight predominance of females and young adults (20-29 years). As for the geographic region and area of residence, the majority lived in the Southeast region and in urban areas in all three years, while there was an increase from 1998 to 2008 in the proportion of individuals living in the North of Brazil. The year 2008 showed a lower proportion of individuals from the lowest income quintile as compared to 1998. 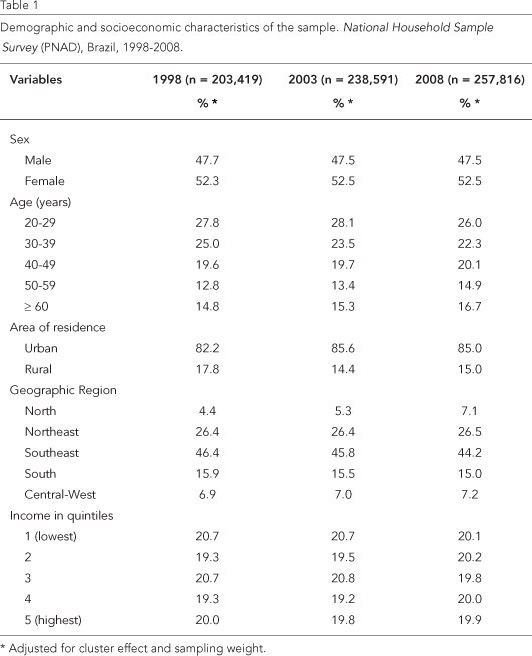 Prevalence of self-reported arterial hypertension increased from 1998 to 2008 in Brazil and in its various geographic regions (1.07% per year). Although the estimated prevalence for all three study years was higher among women, the annual increase was higher in men. Self-reported arterial hypertension was proportional to age, and the highest increase was observed in age groups 50 years and older. Higher prevalence rates were also seen in residents of the South and in urban areas of the country.

Despite the inherent limitations in obtaining self-reported morbidity data, there is a consensus in the literature that self-reported systemic arterial hypertension is a valid and appropriate indicator for estimating the frequency of the disease, with the advantage of rapid data collection and low cost 13,14,15,16. Another fact to be considered in the utilization of the self-reported measure is the influence of access to health services, such that the prevalence rates may be overestimated.

In the current study, the prevalence rates for self-reported arterial hypertension were higher among women in all three study years. Other studies on self-reported arterial hypertension have also reported higher prevalence among women 8,9,11,13,14,16,21,22. Some studies that evaluated hypertension using more accurate methods such as repeat blood pressure measurements found a higher prevalence among men 23,24. The current study's findings can be partially explained by women's greater use of health services 25, which gives them more opportunity to receive a medical diagnosis of arterial hypertension. Another explanation is that obesity 26,27,28 and physical inactivity are more common among women 29. However, a larger increase in prevalence, as observed in men, may mean that there is an increase in the risk of cardiovascular diseases in this group. This trend was observed in other studies 6,9,11,21 and may be related to the increase in obesity among men 30.

Prevalence of self-reported systemic arterial hypertension increased with age, especially after 50 years, which is consistent with other studies showing more frequent reporting of arterial hypertension in older persons 8,9,24,31. Older individuals tend to use health services more often due to the higher prevalence of disabilities and chronic illnesses in this age bracket. This increases the likelihood that these individuals will receive a medical diagnosis for some disease, like arterial hypertension, which could explain the findings. The current study also showed differences between the regions of Brazil and between areas of residence (urban versus rural). Urban residents presented higher prevalence rates. The relationship between arterial hypertension and urbanization may be associated with increased access to industrialized products by part of the population, lifestyle changes, daily stress 32, and even greater access to medical services when compared to residents of rural areas of Brazil.

The current study showed a direct relationship between arterial hypertension and socioeconomic status. Travassos et al. 33 demonstrated that in Brazil, access to and utilization of the health system increased in proportion to income and schooling, reflecting the country's pattern of social inequalities, which could explain the finding.

Knowledge on the prevalence of arterial hypertension in Brazil is essential for supporting prevention and control measures that will contribute to reducing the impact of cardiovascular diseases at the population level, especially the subgroups most exposed to the disease. In conclusion, the study showed that overall prevalence of self-reported arterial hypertension increased during the 10-year period. This trend not only reflects increased access to health services, but also exposes the inadequacy of current strategies to fight arterial hypertension. The challenge thus remains to make health promotion and prevention measures more effective, through legislation and regulation, as well as educational activities, focusing especially on the reduction of sodium in foods, increased access to and consumption of fruits and vegetables, and treatment of arterial hypertension, among other effective measures.

23. Ford ES. Trends in mortality from all causes and cardiovascular disease among hypertensive and nonhypertensive adults in the United States. Circulation 2011; 123:1737-44.