Prostate cancer mortality projections at the nationwide and regional levels to the year 2025 are carried out in this ecological study that is based on an analysis of Brazilian trends between 1996 and 2010. The predictions were made for the period 2011-2025 utilizing the Nordpred program based on the period of 1996-2010, using the age-period-cohort model. A significant increase was observed in the Brazilian rates between 1996 and 2006, followed by a non-significant decrease. The projections indicate a decrease in rates at a national level as well as for the Central, South and Southeast regions. Increases are expected for the North and Northeast regions. In conclusion, a reduction in the mortality rates for prostate cancer in Brazil is expected to the year 2025, as well as for the Central, South and Southeast regions. However, an increase in the absolute number of deaths in all regions is expected due to the anticipated aging of the population.

Prostate cancer is considered globally to be the most prevalent and the sixth most mortal type of cancer in men. In Brazil, prostate cancer is the most common type of cancer in men and, in terms of the number of deaths, occupies second position, after lung cancer. The incidence rate is approximately 50 per 100,000 inhabitants, with more than 40,000 cases diagnosed annually. 14,500 deaths by prostate cancer are registered every year in Brazil, with rates of 16 deaths per 100,000 inhabitants per year, slightly fewer than lung cancer 11 Ferlay J, Shin HR, Bray F, Forman D, Mathers C, Parkin DM. Globocan 2008: cancer incidence and mortality worldwide. Lyon: International Agency for Research on Cancer; 2010. (IARC Cancer Base, 10)..

The International Agency for Research on Cancer (IARC) predicts that the number of deaths by prostate cancer in Brazil will almost double by the year 2025 11 Ferlay J, Shin HR, Bray F, Forman D, Mathers C, Parkin DM. Globocan 2008: cancer incidence and mortality worldwide. Lyon: International Agency for Research on Cancer; 2010. (IARC Cancer Base, 10).. However, these projections are limited, as there are no age- or region- specific data available. The detailed study presented herein is very important in a country with a high proportion of inequalities and profound regional differences such as Brazil. Furthermore, trend analysis and cancer mortality projections are very useful for planned interventions such as screening programs and therapy advances, as well as to quantify the probable burden of cancer in the future.

The objective of this study is to carry out projections of prostate cancer mortality in Brazil and its regions until the year 2025, based on the trend analysis for the period 1996-2010.

This is an ecological study for which the data were obtained from the Brazilian Ministry of Health web page (Departamento de Informática do SUS. Informações de Saúde. Estatísticas Vitais. http://www2.datasus.gov.br/DATASUS/index.php?area=0205, accessed on 02/Jul/2013) along with population data from 1996 to 2010. All deaths registered as prostate cancer (ICD-10 code: C61) were included in the analysis. The quality of death certificates is comparable to those of developed countries, and the proportion of ill-defined death causes is lower than 13% for the overall country and lower than 6% for the capital cities (Global Health Observatory Data Repository, World Health Organization. Demographic and Socioeconomic Statistics: Census and Civil Registration Coverage. Data by Country. http://apps.who.int/gho/data/node.main.121, accessed on 23/Apr/2014) 77 Fonseca LA, Eluf-Neto J, Wunsch Filho V. Cancer mortality trends in Brazilian state capitals, 1980-2004. Rev Assoc Med Bras (1992) 2010; 56:309-12..

Analyses of mortality and predictions were performed by calculating crude and adjusted rates, expressed per 100,000 persons per year. The adjusted mortality rates were calculated by the direct method using the world standard population as reference for Brazil and its five regions (North, Northeast, Central, Southeast, and South). Adjusted rates for each year were calculated to study trends using the Joinpoint Regression Program (National Cancer Institute, Bethesda, USA). Crude rates were calculated, as well as the confidence intervals for the adjusted rates, to a confidence level of 95%. The objective was to determine whether the estimated trends were statistically significant or not. Joinpoint analysis identifies the moment in which changes in trends occur and calculates the annual percentage change (APC) in each segment. The analysis starts with a minimum number of joinpoints and compares whether one or more are significant to the model 88 Kim HJ, Fay MP, Feuer EJ, Midthune DN. Permutation tests for joinpoint regression with applications to cancer rates. Stat Med 2000; 19:335-51.. Birth-cohort analysis was carried out graphically and dividing data in five- year periods.

In the period 1996-2010, 139,349 deaths were registered in the Brazilian mortality database as being from prostate cancer. The Joinpoint analysis shows an initial increase in mortality rates, followed by a stable plateau after the year 2006. The same trend is found by region, with an exception for the North region, where significant increases were verified for the entire period. In the remaining regions, the initial increase occurred until the years 2005 and 2006, followed by a decrease in rates. However, the APC were not statistically significant in the second segment (Table 1).

Trend analysis for mortality by birth cohort shows an increment in rates for individuals in the age groups of 75-79 and 80-84 years of age, with a change in trends and stability for younger cohorts starting from 1933 (Figure 1).

Table 2 presents the total number of deaths and death by age group, along with rates that are adjusted to the world population, during the observed and projected periods, for Brazil and its geographic regions. For the projected period (2011-2025) an increase in the absolute number of deaths is predicted, reaching a total number of 236,086 cases. During the most recent period under observation (2006-2010), 59,647 deaths were registered, and 91,420 cases are expected for the last projected period (2021-2025). When comparing the most recent period with the last projected period, an increase of 53.3% is predicted in the number of deaths, with 60% of these being as a result of population changes, and a reduction of 6.8% is also expected in death risk by prostate cancer.

Figure 2 shows a comparison of prostate cancer mortality rates: observed adjusted versus projected for the five regions of Brazil. The predicted increase can be observed in the adjusted mortality rates for the North and Northeast regions, attributed both to increases in risk as well as to population changes. Decreases are predicted for the remaining regions (South, Southeast and Central) due to reductions in risk.

From 1996 onwards, a significant increase in Brazilian prostate cancer mortality rates was observed, followed by a slight decrease in the period after 2006. The projections of this study indicate decreases in mortality rates from prostate cancer in Brazil, as well as in the South, Southeast and Central regions, until the year 2025. In contrast, an increase is predicted in the rates of less developed regions of the country, in the North and particularly in the Northeast region. Nevertheless, it must be mentioned that it is expected that the absolute number of deaths from prostate cancer increases in all regions due to the population aging process in Brazil. This increase in mortality is predicted to be smooth in the South and Southeast regions, as a consequence of the reduction in risk or increased effectiveness of early diagnosis, while for the North and Northeast regions the changes in risk and population may almost double the number of deaths by the year 2025.

Regarding cancer mortality rates, there are three factors that could exert an influence: changes in risk factors for the development of the disease, screening programs and advances in treatment 1616 Bezerra-de-Souza DL, Bernal MM, Gomez FJ, Gomez GJ. Predictions and estimations of colorectal cancer mortality, prevalence and incidence in Aragon, Spain, for the period 1998-2022. Rev Esp Enferm Dig 2012; 104:518-23.. Currently it is known that non-modifiable risk factors, such as family-genetic factors and especially age, play an important role in the development of prostate cancer. However, these factors do not affect the analysis presented herein because this study analyzed age-adjusted rates and at a collective level, where there is a low influence of family-genetic factors. Regarding modifiable risk factors, such as obesity and the consumption of tobacco and alcohol, which have already been established for other types of cancer, the association remains little known for prostate cancer 1515 Ferris-i-Tortajada J, Garcia-i-Castell J, Berbel-Tornero O, Ortega-Garcia JA. Constitutional risk factors in prostate cancer. Actas Urol Esp 2011; 5:282-8.. For this reason, it is not possible to explain the influence of these factors in the regional differences in mortality rates encountered herein.

As a limitation of this study, the period for which the projections apply – just 15 years – is short. Regarding the national registry of deaths by cancer in Brazil, it must be mentioned that in the past there were issues with data reliability, particularly in the North and Northeast regions, but improvements have been made since the 2000s 66 Chatenoud L, Bertuccio P, Bosetti C, Levi F, Curado MP, Malvezzi M, et al. Trends in cancer mortality in Brazil, 1980-2004. Eur J Cancer Prev 2010; 19:79-86.. Cancer projections must be considered with caution, as the actual diagnosis and treatment conditions might change in the future, and consequently modify the mortality trends. However, the methods currently used have certified validity and some authors point to small differences of between 10 and 20% in estimations 22 Bernal M, Romero FJ, Souza DL, Gomez-Bernal FJ, Gomez-Bernal GJ. Estimation of the projections of incidence rates, prevalence and mortality due to prostate cancer in Aragon (Spain). Actas Urol Esp 2011; 35:470-4..

In conclusion, an initial increase in prostate cancer mortality rates was herein demonstrated, followed by a slight decrease in rates that is predicted to take place until the year 2025 in the entire country. However, in the North and Northeast regions increases in mortality are expected, attributed to changes in risk and the aging of the population. The results of the projections presented herein clearly show the inequities present in prostate cancer mortality rates per geographic region, which must be considered for the development of public policies and for the planning of health services.

To CNPq for their financial support. 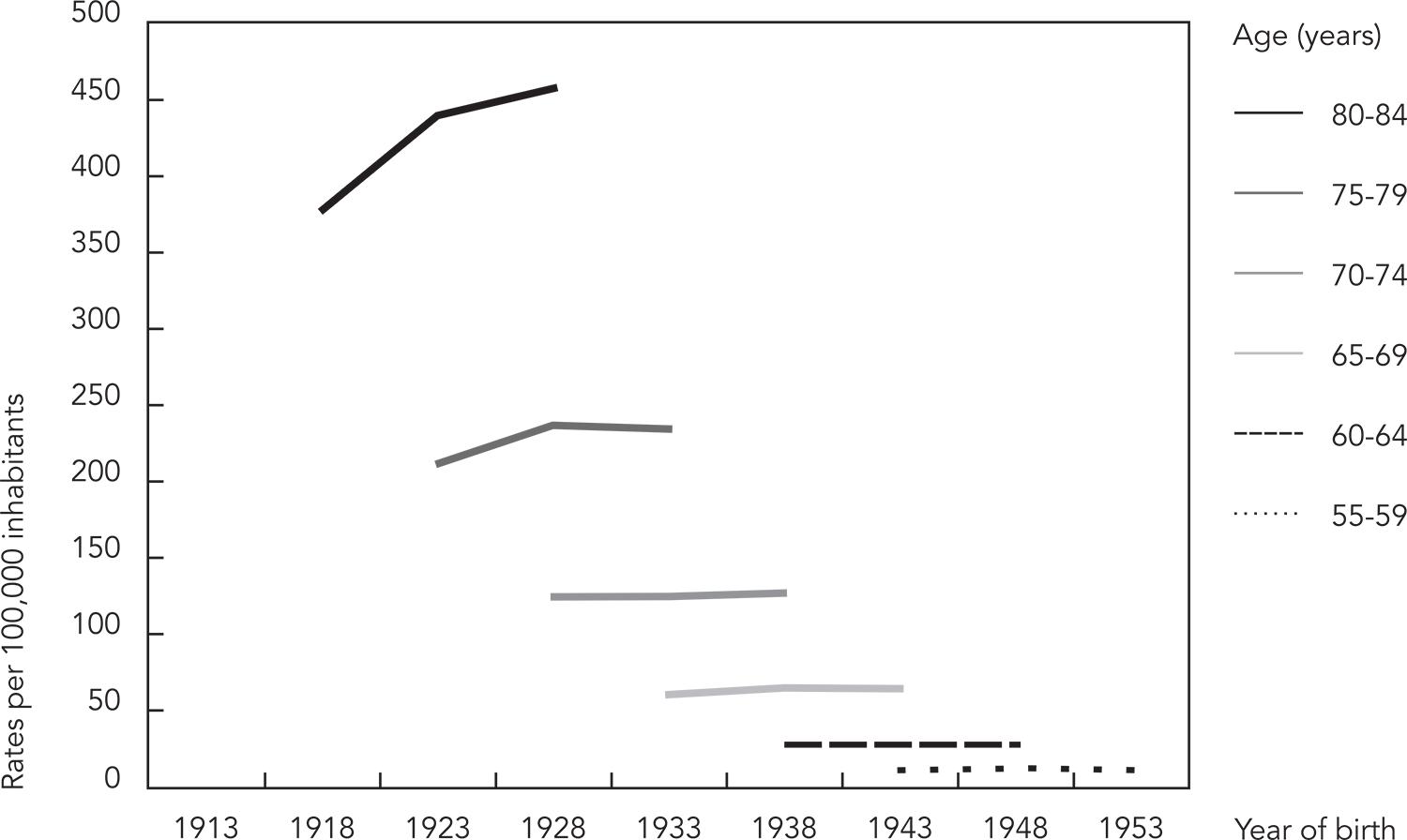 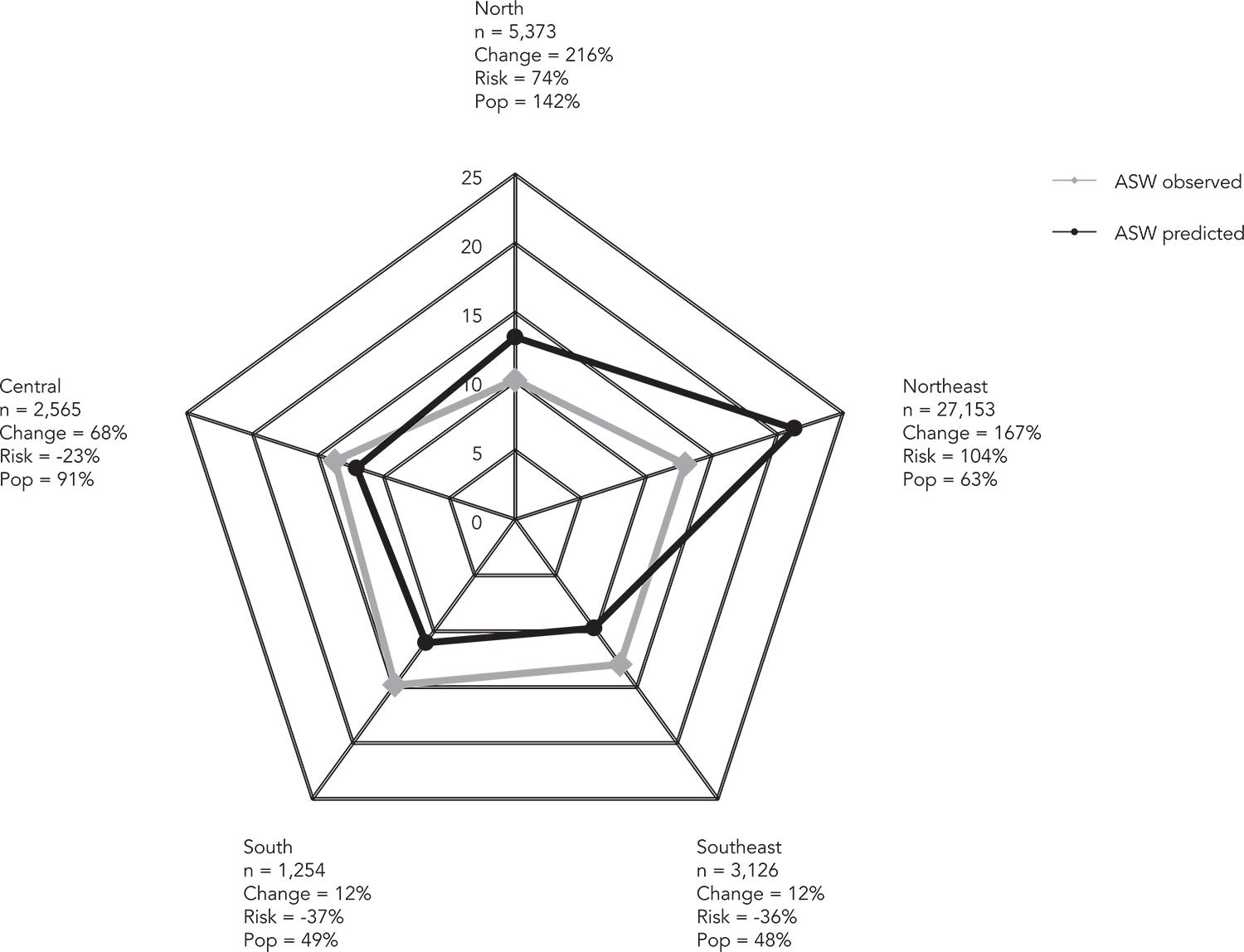