Time spent by Brazilian students in different modes of transport going to school: changes over a decade (2001-2011)

Active commuting to school is an alternative way to promote an active and healthy lifestyle among children and adolescents 11 World Health Organization. Transport, environment, and health. Vienna: WHO Regional Publications; 2000. (European Series, 89).; however it has decreased over time 22 Costa FC, Silva KS, Schomoelz CP, Campos VC, Assis MAA. Longitudinal and cross-sectional changes in active commuting to school among Brazilian schoolchildren. Prev Med 2012; 55:212-4.. Among the factors that have affected the journey to school in the last seven decades, researchers have highlighted the change in the availability of transportation technologies and an expectation to travel greater distances in a shorter time 33 Pooley CG, Turnbull J, Adams M. The journey to school in Britain since the 1940s: continuity and change. Area 2005; 37:43-53..

Identification of changes in the proportion of time spent in each type of transportation for commuting to school is important for clarifying some issues like the contribution of time spent in commuting to school for physical activity level proposed in the guidelines 44 World Health Organization. Global recommendation on physical activity for health. Geneva: World Health Organization; 2010. or evaluated in intervention 55 Chillon PP, Evenson KR, Vaughn A, Ward DS. A systematic review of interventions for promoting active transportation to school. Int J Behav Nutr Phys Act 2011; 8:1-17.. Nevertheless, there are limited data examining changes in time spent in different types of transportation used for going to school. The rationale of this study is to answer some questions, such as how many students used walking/bike or car/motorcycle or bus to school for short, middle and long distance trips? Overall, it is expected that people choose motorized transport for long trips, and active commuting as a strategy for short trips. This study analyses changes in the time spent in each mode of transportation to school in two surveys conducted with high school students living in Santa Catarina, Brazil. We also evaluated whether the trend between 2001 and 2011 differed according to gender and age.

The data collection was conducted in the classroom, and the students completed the questionnaire in a guided session by the researchers. We assessed the mode of transportation students typically used to go to school (on foot/by bicycle; by bus; car/motorcycle) and the time spent in commuting (< 10min/day: short trips; 10-19min/day: medium trips; ≥ 20min/day: long trips).

Comparisons across surveys and variables studied (sex and age) were based on the prevalence and its 95% confidence interval (95%CI), according to procedures for studies with complex sample in Stata version 11 (Stata Corp., College Station, USA).

Thumbnail
Figure 1
Changes in the proportion of time spent in each mode of transportation used for going to school, by gender. Santa Catarina State, Brazil, 2001 and 2011.

Thumbnail
Figure 2
Changes in the proportion of time spent in each mode of transportation used for going to school by age. Santa Catarina State, Brazil, 2001 and 2011.

Our findings indicated changes in short versus long trips by foot/bike over a ten-year period. These changes occurred for both genders and among students aged 15-16 years. Active commuting for at least 10 minutes has been commonly recommended as a strategy by government agencies to promote physical activity and to achieve health benefits 77 International Physical Activity Questionnaire: guidelines for data processing and analysis of the International Physical Activity Questionnaire (IPAQ) – short and long forms. http://www.ipaq.ki.se/scoring.pdf (accessed on 11/Feb/2013).
http://www.ipaq.ki.se/scoring.pdf... . However, after a decade, we observed a decrease in the proportion of adolescents in this commuting group, which, in turn, substantially reduces the contribution of this domain to the total physical activity level.

Several correlates of active commuting to school are described in the literature, including personal and socio-demographic factors 88 Reimers AK, Jekauc D, Peterhans E, Wagner MO, Woll A. Prevalence and socio-demographic correlates of active commuting to school in a nationwide representative sample of German adolescents. Prev Med 2013; 56:64-9., and physical environment 99 Trapp G, Giles-Corti B, Christian H, Bulsara M, Timperio A, McCormack G, et al. On your bike! A cross-sectional study of the individual, social and environmental correlates of cycling to school. Int J Behav Nutr Phys Act 2011; 8:123.. Many factors were investigated, including traffic and neighborhood aesthetics; however, the distance from home to school remained the main determinant of active commuting 1010 Wong BY, Faulkner G, Buliung R. GIS measured environmental correlates of active school transport: a systematic review of 14 studies. Int J Behav Nutr Phys Act 2011; 8:39.. In a previous study of Brazilian adolescents, the distance, crime/safety concerns and traffic were associated with passive commuting 1111 Silva KS, Vasques DG, Martins CD, Williams LA, Lopes AS. Active commuting: prevalence, barriers, and associated variables. J Phys Act Health 2011; 8:750-7.. These factors may partially explain the rise in the use of motorized transport for short trips found in our study.

Our findings may be a result of recent socioeconomic improvements in Brazil. Between 2001 and 2011, there was an increase of 78% in the number of cars and buses in Brazil. In the same period, the number of cars and buses almost doubled (95.3%) in Santa Catarina (Departamento Nacional de Trânsito. Frota de Veículos. http://www.denatran.gov.br/frota.htm, accessed on 01/Jun/2012). Census data indicated an increase in the proportion of households with cars in Santa Catarina from 50.3% in 2000 to 64% in 2010 1212 Instituto Brasileiro de Geografia e Estatística. Censo demográfico 2000 e 2010: características das famílias e dos domicílios: resultados da amostra. Rio de Janeiro: Instituto Brasileiro de Geografia e Estatística; 2012.. Regarding the number of buses, we are unsure if the increase aimed to serve more people along the same routes or if new ones were made available as an extension of services to accommodate more users in the public transport system.

Our study showed that for all types of transportation, the proportion of youth who travelled for more than 20 minutes decreased over time. An explanation for this result is the growth of 17.5% in the number of high schools over this decade, from 598 in 2001 to 725 in 2011. This probably resulted in closer distances between home and school, thus decreasing the proportion of long trips over time. In this study, no evidence for decreased time for travel to school by bus was observed for long trips, mainly because the majority of students who use this mode of transportation lived in rural areas.

In summary, our findings indicated a stable pattern of commuting by bus in the two surveys. However, there was a rise in the proportion of males who actively traveled or commuted by car/motorcycle to school for short trips and a decrease for longer trips over a ten-year period. These findings could reflect the decrease of overall physical activity levels of young people. A systematic review on the association between active travel to school and physical activity levels in youth found that active commuters tend to be more physically active than passive commuters 1313 Lee MC, Orenstein MR, Richardson MJ. Systematic review of active commuting to school and children’s physical activity and weight. J Phys Act Health 2008; 5:930-49..

The findings of the present study contribute to the discussion in public policy on the design of safe environments to promote active commuting to schools, especially to decrease the use of motorized transport for short trips.

We would like to pass on our thanks to the Department of Physical Education of the Federal University of Santa Catarina for approval of the COMPAC Project to be done in both years, the chairpersons of the Regional Education Boards, the directors of the selected schools, the teachers who kindly gave up their class time, and all the students who participated in this study. We thank all members of the Research Center on Physical Activity and Health who participated in the data collection.

Figure 1   Changes in the proportion of time spent in each mode of transportation used for going to school, by gender. Santa Catarina State, Brazil, 2001 and 2011. 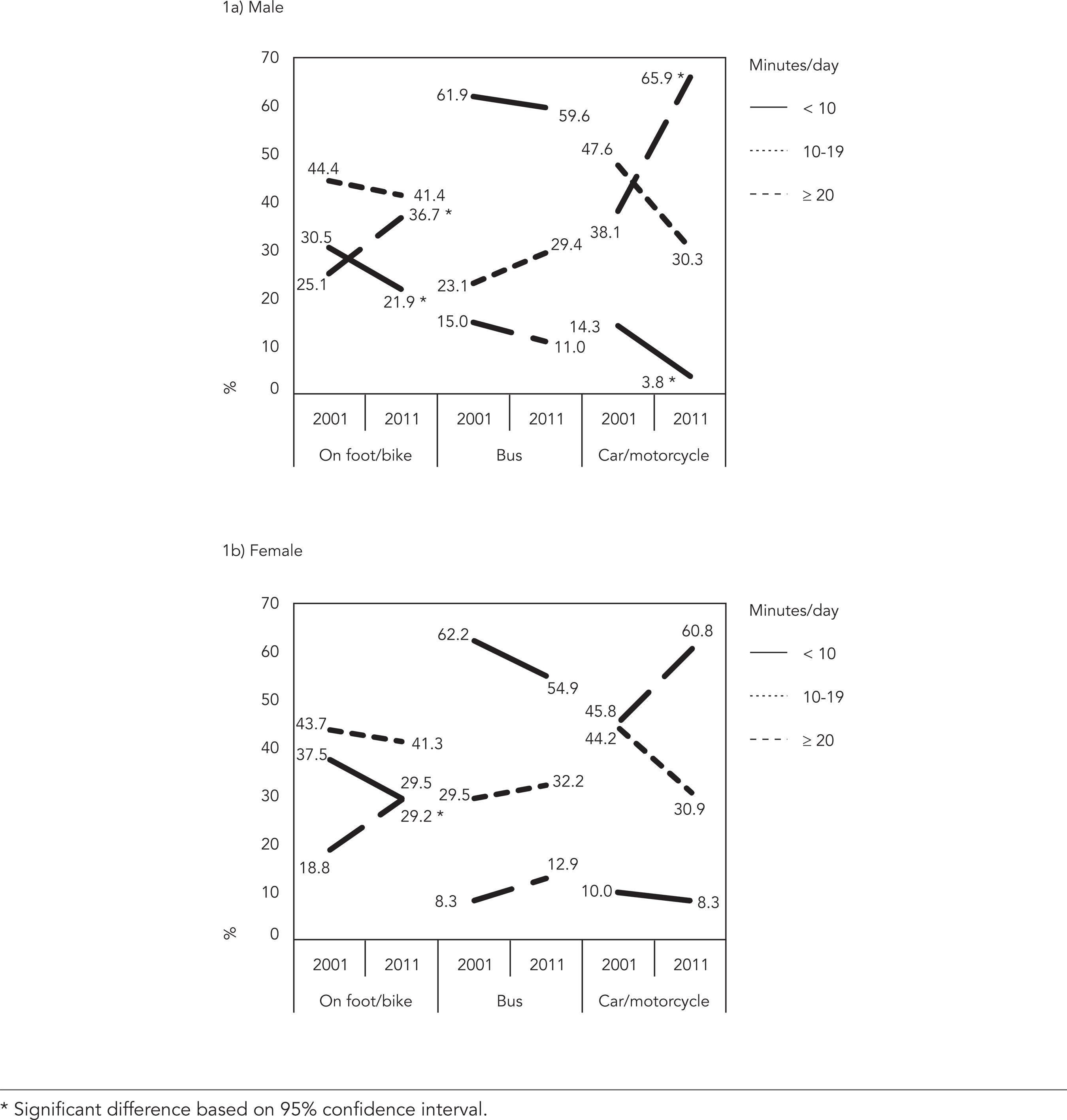 Figure 2   Changes in the proportion of time spent in each mode of transportation used for going to school by age. Santa Catarina State, Brazil, 2001 and 2011. 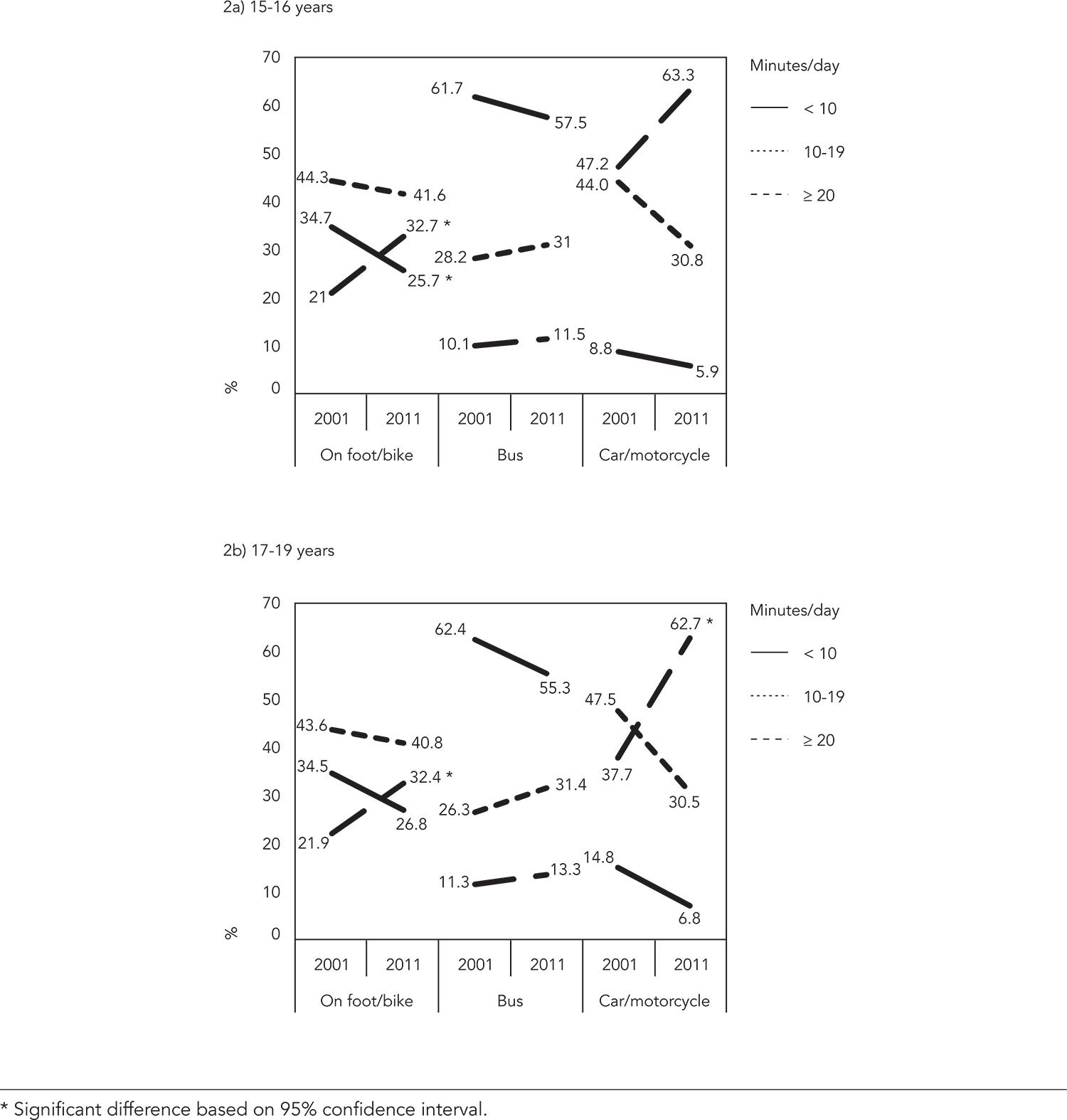