Familial aggregation and dietary patterns in the Brazilian population

The aim of the study was to identify dietary patterns in Brazil and verify aggregation among members of the same family based on the Brazilian National Dietary Survey, a nationwide dietary survey conducted in 2008-2009 in individuals over 10 years of age. Dietary intake was estimated with a food record. Dietary patterns were identified by factor analysis, and familial aggregation was verified by linear regression. Three major dietary patterns were identified: (1) a traditional snack featuring coffee, rolls, oils and fats, and cheese; (2) traditional main meal, based on rice, beans and other legumes, and meat; and (3) fast food type snacks, namely sandwiches, processed meats, soft drinks, snacks, and pizza. Pattern 2 showed the strongest association (β = 0.37-0.64). Patterns 1 and 3 showed positive associations for all pairs of family members, with β ranging from 0.27 to 0.44 and 0.32 to 0.42, respectively. The study showed familial aggregation of dietary patterns in the Brazilian population.

Effective proposals for the prevention of this group of diseases and promotion of healthy eating by adolescents require understanding the formation of eating habits and their maintenance over the course of life. Multiple socioenvironmental and personal factors interact to influence individual eating patterns, featuring interpersonal relations within the family. In addition to providing food, the family influences attitudes, preferences, and values related to food intake. Equally important are the independence and autonomy acquired during adolescence and related to food choices 44. Story M, Neumark-Sztainer D, French S. Individual and environmental influences on adolescent eating behaviors. J Am Diet Assoc 2002; 102(3 Suppl):S40-51..

Nutritional Epidemiology has used the identification of dietary patterns to overcome the limitations of studies based on computation of nutrients and foods, given the complex combination of nutrients and anti-nutritional factors in the human diet. Statistical methods are used for this purpose that allow analyzing correlations between a large number of variables (food groups in this case), defining a set of common latent dimensions that can provide a more objective basis for the elaboration of dietary recommendations and guidelines 1111. Ocké MC. Evaluation of methodologies for assessing the overall diet: dietary quality scores and dietary pattern analysis. Proc Nutr Soc 2013; 72:191-9..

Despite much discussion in this regard, to our knowledge there are no studies aimed at verifying the association between food intake patterns among individuals from the same family. Such an approach allows identifying family influence on eating habits that are consistent with disease risk or protection. The aim of the current study is to investigate familial aggregation of dietary patterns in a representative sample of the Brazilian population.

Data were collected in the POF from May 2008 to May 2009. Following geographic and statistical stratification of the primary sampling units, namely the census tracts from the 2000 Population Census, a two-stage cluster sampling plan was adopted. The first stage was the choice of census tracts, selected by proportional probability in relation to the number of households in each tract. A subsample of tracts was selected by simple random sampling in each stratum.

The secondary units sampled in the second stage were the permanent private households within each of the selected tracts, selected by simple random sampling without replacement. Tracts were evaluated over the 12 months of study, thus allowing the geographic and socioeconomic strata to be represented by the selected households during every quarter.

Individual food intake was assessed by simple random sampling of a subsample of 25% of the units from the second stage, the households in each tract. All the tracts selected in the POF 2008-2009 were surveyed, as were all residents over ten years of age in the households from the INA subsample. Of the 55,970 households selected for the POF 2008-2009, 34,003 individuals over ten years of age participated in the evaluation of individual food intake.

For analysis of familial aggregation, we selected households where at least one adolescent child lived. We thus identified each household resident based on information on the degree of kinship or nature of household subordination in relation to the reference person in the consumption unit, with the following options: (01) reference person; (02) spouse; (03) child; (04) other relative; (05) tenant; (06) pensioner; (07) domestic servant; or (08) domestic servant’s relative. Further details on the sampling and data collection have been published by IBGE 1313. Instituto Brasileiro de Geografia e Estatística. Pesquisa de Orçamentos Familiares, 2008-2009. Despesas, rendimentos e condições de vida. Rio de Janeiro: Instituto Brasileiro de Geografia e Estatística; 2010..

“Reference persons”, “spouses”, and “children” were grouped separately. The NODUPKEY procedure (software SAS, version 9.3; SAS Inst., Cary, USA) was used to randomly select a child from each household, and a second child was chosen, independently of gender and also randomly, as the sibling. Through the child, the mother was identified as the female reference person and the father as the male reference person. Of the total INA sample, 5,927 families had at least one child, who added to a sibling, father, and/or mother, when they existed, totaled 17,918 individuals in the sample. Figure 1 shows the flowchart with the formation of the sample for analysis of familial aggregation.

Food intake was estimated by recording all foods and beverages consumed on predetermined days, besides reporting the times, amounts consumed (in household measuring units), and preparation. Food intake records were completed by the informants themselves except when they presented some impediment, in which case the assistance of another household resident or relative was suggested. For the current article, the analyses are based on the first day of the food record due to the lack of data (for 1,103 individuals) on the second day. Missing data in studies with complex samples affect important information such as those on strata and clusters due to the study design’s properties, which can skew the estimates 1414. Gorrell P. Survey analysis: options for missing data. Silver Spring: Social & Scientific Systems, Inc.; 2009..

Participants on in the INA survey cited a total of 1,120 food items on the first day, all of which were grouped into 27 groups according to nutritional similarity and frequency of consumption, in order to subsequently identify the dietary patterns by exploratory factor analysis. Table 1 lists the 27 food groups.

Identification of food intake patterns used factor analysis, with principal components analysis as the extraction method, aimed at reducing the data (food groups) into factors (dietary patterns) based on the correlations between these variables. This procedure was employed due to the complexity of the POF sample. We began by establishing the estimated correlations matrix considering the sample’s complex design, using the GLM procedure from the SAS statistical package; factor analysis was performed using as “input” the estimated correlations matrix considering the sample’s complex design according to the methodology proposed by Skinner et al. 1515. Skinner CJ, Holt D, Smith TMF. Analysis of complex surveys. New York: Wiley; 1989. and employed in Nutritional Epidemiology by Kerver et al. 1616. Kerver JM, Yang EJ, Bianchi L, Song WO. Dietary patterns associated with risk factors for cardiovascular disease in healthy US adults. Am J Clin Nutr 2003; 78:1103-10..

The analysis generated factor scores that represent the sum of the loads of each factor weighted by the factor’s eigenvalue and multiplied by each individual’s standardized food group intake. The scores represent standardized variables, with mean equal to zero and standard deviation equal to one.

Familial aggregation of dietary patterns was verified by linear regression. The PROC SURVEYREG procedure was used, which allows analysis of data from complex samples, considering the expansion factors, by means of the SAS version 9.3 statistical package. In order to test the respective correlations between the pairs: “father and son”, mother and son”, “father and daughter”, “mother and daughter”, “siblings”, and “father and mother”, each linear regression model was constructed using the normalized factor scores for each pair’s component, while in the linear regression analyses between mothers and children and between fathers and children, the child’s factor scores were used as the dependent variable, and for the father-mother pairs the father’s factor scores were used as the dependent variable. It was assumed that children are extensively influenced by the parents’ eating habits 2121. Wardle J. Eating behaviour and obesity. Obes Rev 2007; 8 Suppl 1:73-5.,2222. Skinner J, Carruth B, Moran J, Houch K, Schmidhammer J, Reed A, et al. Toddler’s food preferences: concordance with family member’s preferences. J Nutr Educ 1998; 30:17-22.,2323. Branen L, Fletcher J. Comparison of college students’ current eating habits and recollections of their childhood food practices. J Nutr Educ 1999; 31:304-10.,2424. Larson NI, Neumark-Sztainer D, Hannan PJ, Story M. Family meals during adolescence are associated with higher diet quality and healthful meal patterns during young adulthood. J Am Diet Assoc 2007; 107:1502-10.,2525. Rossi A, Moreira EA, Rauen MS. Determinants of eating behavior: a review focusing on the family. Rev Nutr 2008; 21:739-48., that the woman exerts influence on the man’s eating, since she historically has greater control over and management of the family’s eating as a whole 2626. Canesqui AM, Garcia RWD, organizadores. Antropologia e nutrição: um diálogo possível. Rio de Janeiro: Editora Fiocruz; 2005., and that for the pairs of siblings, the adolescents were selected randomly in the household and the first one selected was used as the dependent variable. Linear regression coefficients and their respective 95% confidence intervals were estimated, which allowed comparison of the relations between family pairs for each of the three factors.

The study protocol for individual food intake in the POF 2008-2009 was approved by the Ethics Research Committee of Instituto of Social Medicine in the Rio de Janeiro State University (CAAE 0011.0.259.000-11).

The first pattern, characterized as the “traditional snack”, included breads, cheeses, oils and fats, and coffee and did not include sweets, salted snacks, or dairy products. The second pattern, characterized as the “traditional main meal”, included rice and rice dishes, beans and other legumes, and meats, and did not include soups, broths, macaroni, or pasta. The third pattern, “fast food type snacks”, included sandwiches, processed meats, salted snacks, pizzas, and soft drinks and not fruit or breakfast cereals.

Thumbnail
Table 2
Components of the rotated matrix of eating patterns retained in the factor analysis of participants in the Brazilian National Dietary Survey (INA), 2008/2009.

Wang et al. 3131. Wang Y, Beydoun MA, Li J, Liu Y, Moreno LA. Do children and their parents eat a similar diet? Resemblance in child and parental dietary intake: systematic review and meta-analysis. J Epidemiol Community Health 2011; 65:177-89., in a recent systematic review and meta-analysis on resemblance of food intake by parents and children, observed weak to moderate associations in studies published since 1980. However, the authors highlighted that many of these studies were based on small samples, and that few had been performed in developing countries, where eating away from home by children and adolescents is not as common as in developed countries.

Lower beta values were observed for pairs with daughters when compared to pairs with sons, which may indicate gender influence on dietary aggregation, with boys more influenced by their parents’ food intake than girls.

The study’s possible methodological limitations include the use of factor analysis for deriving dietary patterns, since this method involves some arbitrary decisions such as grouping of food items and retention and naming of factors. Still, the dietary patterns identified here were comparable to those of other studies.

The study identified familial aggregation of food intake patterns in the Brazilian population, suggesting family influence on individual eating habits. This context corroborates the importance of developing strategies to encourage eating meals in the family and exploring the contribution of family life to healthy dietary practices, providing evidence for elaborating dietary recommendations and public health policies.

The authors wish to thank the General Coordination of Food and Nutrition of the Brazilian Ministry of Health for the funding and the Brazilian Graduate Studies Coordinating Board (Capes) research funding agency for the grant to F. A. Massarani. 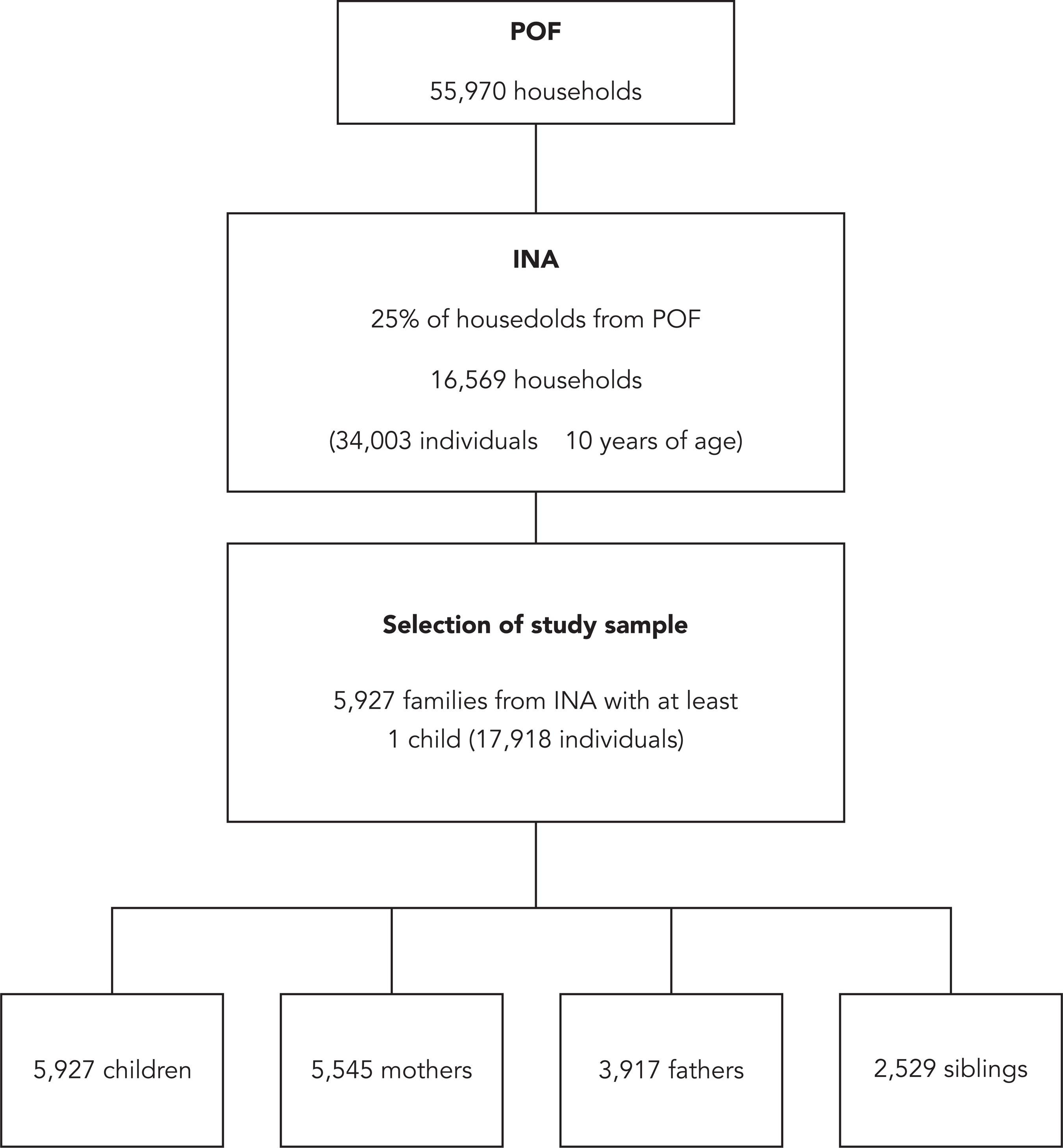 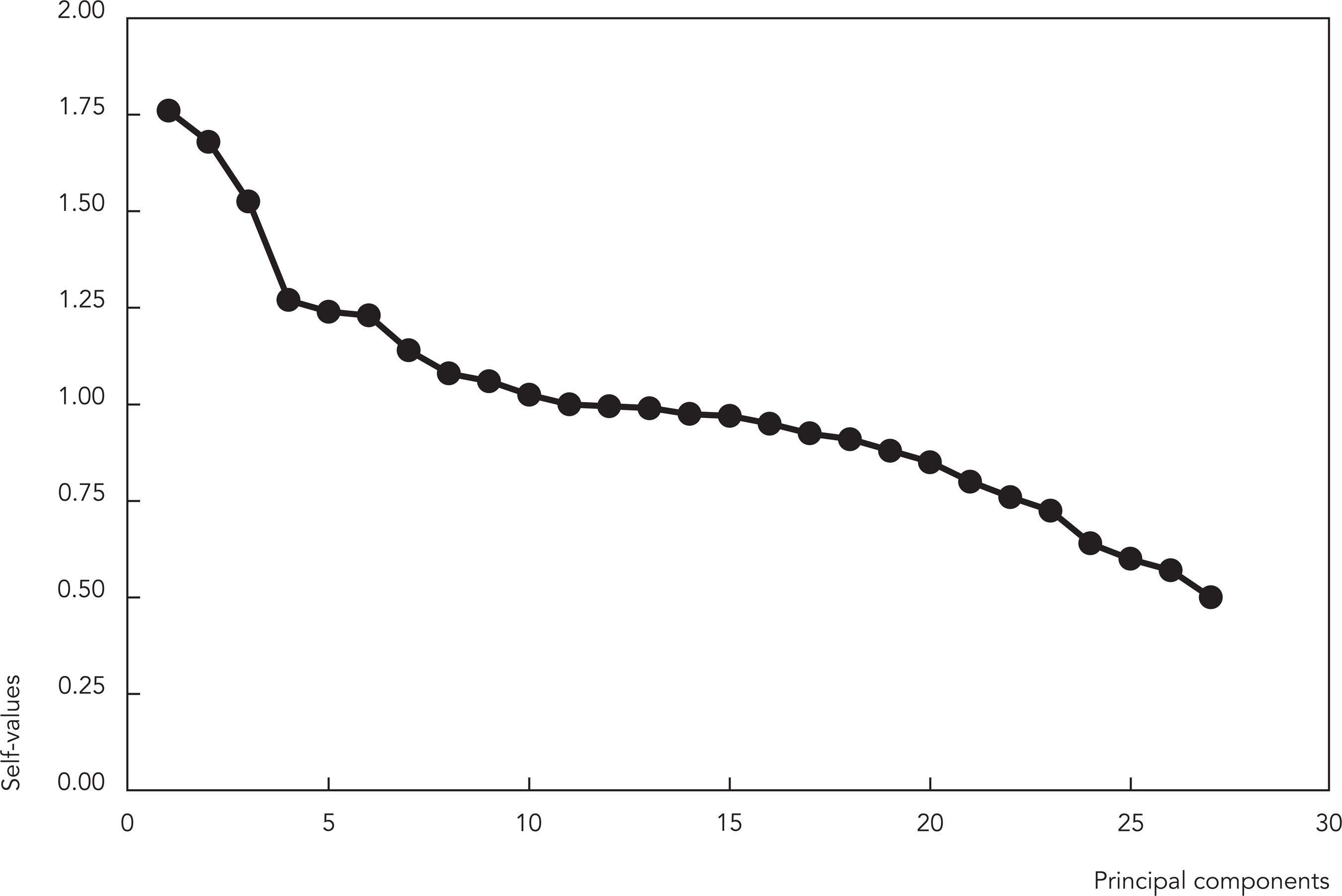 Table 2   Components of the rotated matrix of eating patterns retained in the factor analysis of participants in the Brazilian National Dietary Survey (INA), 2008/2009.