The evolution of the socioeconomic gap in fertility among adolescents in Chile, 1990-2011

For research and policy issues, it is very important to measure the evolution of socioeconomic differences in the adolescent fertility rate over time (AFER) in order to be able to provide a quantitative description of such an evolution. By combining well reputed Chilean data, this study computes a ratio of AFER (15-17 years-old) between the 30% of the population living in economically worst off areas (the numerator) against the corresponding 30% better off segment of the population (the denominator). This ratio of AFER by relative socioeconomic status shows a stable evolution from 1.45 in the year 1990 to 1.10 in 2011. Sexual initiation, whose association with AFER is well established, also shows a dropping ratio, from 1.24 in 1997 to 1.01 in 2012. The size of some dimensions of socioeconomic inequalities in adolescent fertility and sexual initiation has being decreasing between 1990 and 2011. This exercise shows that even in Chile, the most unequal country among the Organisation for Economic Co-operation and Development, there are some improvements in health inequality.

The adolescent fertility rate (AFER) is a key dimensions of adolescents' reproductive health, and is usually linked to socioeconomic status (SES).

But only a few studies follow the evolution of inequality in adolescent fertility across time, and they use follow-up data that is not available in most countries, and use absolute rather than relative measures of SES.

Absolute measures, such as education level and race, are likely to change their “prevalence” across time 11. Manlove J, Ikramullah E, Mincieli L, Holcombe E, Danish S. Trends in sexual experience, contraceptive use, and teenage childbearing: 1992-2002. J Adolesc Health 2009; 44:413-23. and are not standard measures across countries, jeopardizing the comparison of health outcomes. A relative measure, like the rank-position of the observation in a socioeconomic ladder, can be compared across time and places.

This study aims to describe quantitatively the evolution of the relative-SES ratio of adolescent (15-17 years old) fertility rates and sexual initiation in Chile on each year between and 1990-2011 or 1997-2012, respectively.

AFERs by SES are difficult to measure. AFERs are small (less than 4% of 15-17 year old women have a child in any recent given year in Chile 55. Ministerio de Salud de Chile. Situación actual del embarazo adolescente en Chile. 2012.http://www.mineduc.cl/usuarios/convivencia_escolar/doc/201210251259030.situacion_actual_emba razo_adolescente_en_chile.pdf (accessed on 10/Mar/2014).
http://www.mineduc.cl/usuarios/convivenc... ), so either large surveys or vital records are required to estimate them. However, large surveys are costly and vital records usually do not include rich socioeconomic information, aside from a few variables regarding parents' education and employment status. Measuring adolescents' SES requires somewhat complex socioeconomic data 66. Currie C, Molcho M, Boyce W, Holstein B, Torsheim T, Richter M. Researching health inequalities in adolescents: the development of the Health Behaviour in School-Aged Children (HBSC) family affluence scale. Soc Sci Med 2008; 66:1429-36.. However, if the vital records include complete data on place of residence, a geographic SES can be computed and used to compare across time and countries, in a relatively easy manner, the ratio of AFERs (or another health measure) between the X% of the population living in the lowest and highest income areas.

Chilean comunas, a very important territorial and administrative unit, are used here as geographic and socioeconomic areas. Comunas are very heterogeneous, ranging from isolated and unpopulated areas to metropolitan areas with over 400,000 individuals each. The socioeconomic comuna-level data is estimated using data from the Encuesta de Caracterización Socioeconómica Nacional (CASEN). CASEN is by far the largest and most influential socioeconomic survey in Chile, and it uses comunas as a second-level sampling unit. There are roughly 350 comunas in Chile, around two thirds of them included in the CASEN sample. Two groups are defined in this study, by sorting the average household per-capita-wage in each comuna and then forming two groups of comunas: a high and a low relative SES group. Comunas in between the two groups are not included in the analysis. Each year from 1990 to 2011 that CASEN is conducted, the grouping is carried out so that the percentage of females aged 15-17 in each group is as close as possible to 30% (it ranges between 28% and 31%). The 30% percent rule is chosen as an equilibrium between the size of each group and the size of the difference in AFER. AFER by SES is defined then as single-year live births over mid-year population among 15-17 year old females. Results are similar if a 15-19 age range is used instead. Deliveries by SES are taken from Chile's official micro data (missing data is estimated to be under 5% since 1990 and about 1% since 2004), which includes the comuna where the mother lives. Total population by SES is taken from official comuna-level estimations, and the percentage of the population who is a 15-17 year old female is taken from the CASEN survey.

Regarding ASEX, the data used in this study comes from a completely different source. The Chilean National Youth Survey ( Encuesta Nacional de la Juventud– ENJuv) is the primary survey for youth issues in Chile, with seven rounds conducted from 1994 to 2012. ENJuv had a sampling error of 1.1% and 3% in urban and rural areas, respectively, in 2012. The ASEX in this study is operationalized by the “proportion that has ever had sex” among 15-17 year old adolescents, as the survey collected data every third year starting in 1994. Due to sample sizes, male and females are pulled together. Comunas on ENJuv 1997 and 2000 are blind-coded, therefore a new exercise of ranking and grouping comunas is required. By choosing among the few household-level economic variables in ENJuv, relative SES is obtained by hierarchically sorting comunas by their “proportion of interviewed population that report having a household head with a professional occupation (i.e. managerial-level employees or at least four years of university education)”. Another option was the “socioeconomic level” variable, as included in ENjuv, but this variable changes substantially from round to round and is not clearly defined in the methodological documents of the survey. Results, nevertheless, are not very sensitive to these options, even if individual-based rather than geographical-based SES are used. The grouping is done so the percentages of the population living in either the higher or lower SES are as close to 30% as possible.

At the same time, the relative household per-capita wage between the highest and lowest SES areas remained at 2.5 (approximately) from 1990 in 2011. Therefore it is probably not a mere closing gap in SES itself that is explaining the closing SES gap in AFER.

The size of some dimensions of socioeconomic inequalities in adolescent fertility and sexual initiation have decreased between 1990 and 2011. This exercise shows that even in Chile, the most unequal country among the Organisation for Economic Co-operation and Development (OECD) 77. Gurría A. Going for growth: reforming for a strong and balanced recovery. Paris: Organisation for Economic Co-operation and Development; 2013., there are clear improvements in some dimensions of health inequality.

Within the limitation of this study, it is important to highlight that selection effects might distort the results if, for example, adolescents that are less inclined to early reproductive lives are moving out of poverty across time. It is also important to mention that measuring SES by residential-area leaves out individual-level dimensions of SES that are relevant for the study of socioeconomic health inequalities.

Figure 1   : Ratio of female adolescent (15-17 years-old) fertility rate (AFER) and sexual initiation (ASEX) between the 30% of the population that lives in the socioeconomically better off areas against the corresponding 30% in the worse off ones, 1990 to 2011. 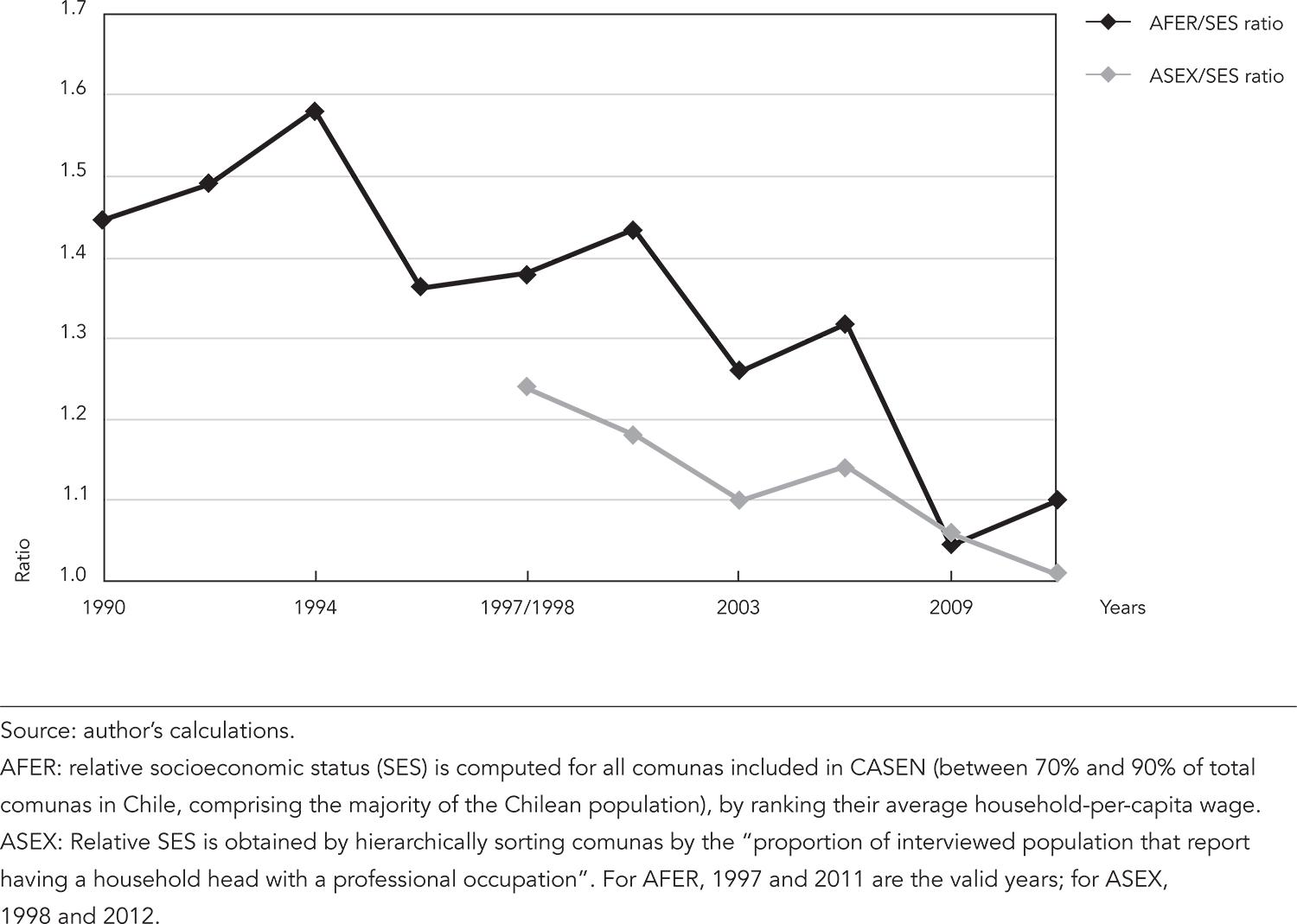 SciELO Analytics
Dimensions
The evolution of the socioeconomic gap in fertility among adolescents in Chile, 1990-2011
PlumX