Impacts of the new fiscal regime on health and education

The new fiscal regime proposal put forward by the Temer administration proposes a rule for primary Federal Government expenditures for the next 20 years, alterable - restricted to the correction factor - in 10 years. This proposal was approved as Constitutional Amendment Proposition 241/2016 (PEC 241) in the House of Representatives and is now under appreciation in the Brazilian Senate as PEC 55. Under its rules, federal expenditures, minus interest payments on the public debt, will be limited to the previous year's expenditures adjusted by the accumulated inflation, measured by the Extended National Consumer Price Index (IPCA). In short, the new fiscal regime will lead to an actual federal government budget freeze, which presupposes a reduction in public expenditures relative to Gross Domestic Product (GDP) and to the number of inhabitants. That is, according to the proposed rule, public expenditures will not follow the growth in income and population.

In this short article, we will address two aspects of this proposal. The first is its macroeconomic impact, taking into account the fact that the new fiscal regime presupposes a scenario of fiscal austerity over the next 20 years. The second is its impact on federal education and health spending. We will show that (i) the proposal will not lead to economic growth and (ii) will substantially reduce health and education spending.

Historical experience shows, as discussed by Blyth 11. Blyth M. Austerity: the history of a dangerous idea. New York: Oxford University Press; 2013., that the austerity remedy aggravates the problems it seeks to solve. Government expenditures are private sector income, which means that, when the government stops spending, someone stops earning. Likewise, the public surplus is private deficit and public debt is private sector asset. Thus, amidst a recession, characterized by a retraction in private spending, if the government seeks to avoid public deficit by cutting its expenditures, it may simply worsen its patrimonial situation and that of the private market, that is, the fiscal effort would cut private sector revenues even further.

In the vicious circle of austerity, public expenditure cuts induce growth reduction, which leads to new reductions in revenues, which demands new spending cuts. This vicious circle only tends to be broken through deliberate government decisions, unless there is a sufficient increase in exports to compensate the cumulative causation of the retraction in public and private internal demand. This exception is less likely amidst an international crisis such as the one currently under way, with slow recovery of demand, greater competition for markets and with foreign trade growing less than the already-depressed world GDP.

In Brazil, the austerity turn is a mark of the second Rousseff administration, which began with the adoption of her 2014 presidential election opponent's economic strategy - that is, a harsh fiscal and monetary adjustment in the hopes that the private sector would regain confidence and begin to invest again. The idea was that the fiscal contraction would be expansionist, only going through a short recessive period that was needed in order to recover trust in government policies. However, despite all the government's efforts in reducing expenditures, which in 2015 led to an actual 2.9% real reduction in primary federal spending, revenues plummeted and the deficit grew even larger, rendering clear the adjustment's counterproductive nature: austericide. That is, spending cuts amidst a scenario such as what was present in 2015 is no guarantee of better fiscal indicators, on the contrary, the public budget worsened due to the interruption in public investments and cutbacks to important areas such as health and education.

In spite of this experience, the Temer administration's new fiscal regime proposal insists on the austerity remedy. The proposal's basic principle is that the federal public spending have null real growth, which will lead to a reduction in public spending as a proportion of GDP. This principle may be identified as a continuous austerity effort which seeks to systematically reduce the State's participation in the economy and, therefore, in economic growth. That is, public demand will systematically contribute to reducing economic growth, which will demand a much greater effort from the private components of demand (consumption, investment and foreign demand).

Additionally, unlike the international experience, the new fiscal regime has no escape clause, that is, it does not permit the rules to be eased during extraordinary economic crises, such as the 2009 crisis, a year in which most central countries expanded public spending, incurring enormous fiscal deficits.

That is, from the macroeconomic point of view, the fiscal reform is disastrous because it imposes a contractionist character on the public demand over a long period and because it takes away from the State the fiscal instruments it needs to face economic crises. However, its social effects are even more critical.

PEC 55, on the other hand, establishes that, in 2017, education spending will be 18% of the RLI, health spending will be 15% of the RCL and, from then onwards, both will be limited to 2017 spending levels adjusted for inflation. That is, the real minimum federal spending on health and education will be frozen at 2017 levels.

Comparing current rules with the minimum established by the PEC, we see that what the PEC establishes is, in fact, a sliding minimum (Figure 1). That is, over time, the minimum value for health and education will fall as a proportion of revenue and GDP. In the simulation we present in Figure 1, with PEC 55, the minimum education spending would be 14.4% of the RLI in 2026 and 11.3% in 2036, while the minimum health spending would be 12% of the RCL in 2026 and 9.4% in 2036. It is worth noting that, despite the fact that PEC 55 establishes a higher minimum for health spending in 2017 and 2018, the government has been spending more than 15% of net revenue on health since 2014.

Thumbnail
Figure 1:
Minimum health and education spending under current rules and under PEC 55 *.

Additionally, social security spending, which currently correspond to around 8% of GDP, should increase due to demographics, even if undergoes a reform. In that context, there is no room for maintaining health and education spending as a proportion of the GDP, and they will tend to decrease under the new rule.

In this simulation, with the health and education spending freeze, they will go from 4% of GDP in 2015 to 2.7% of GDP in 20 years, when the Brazilian population will be 10% larger. Meanwhile, other federal expenditures (excluding social security and interest payments) which made up 7% of GDP in 2015 will be 0.6% of GDP in 2036, which seems neither technically nor politically feasible.

Considering an unlikely stabilization of social security spending at 8.5% of GDP and an average 2.5% economic growth, simple arithmetics show that it is impossible - mathematically impossible - for Brazil to reach 2036 with a higher level of health and education spending, as a proportion of GDP, even under the anarcho-capitalist hypothesis of eliminating all other public expenditures, executive, judiciary, legislative, armed forces, infrastructure, etc. That is because, according to the simulation, total primary government spending in 2036 will be 12.3% of GDP. If social security spending adds up to 8.5% of GDP, there will only be 3.8% of the GDP left, an inferior percentage to current health and education spending, around 4% of GDP in 2016. Thus, it is demagogic to simultaneously defend the PEC and public health and education.

In summary, the government's proposed fiscal reform is not a plan for fiscal stabilization, but a project of drastic State reduction. In the macroeconomic plane, the reform will hinder economic growth by institutionalizing and automatizing a permanent fiscal adjustment. Additionally, the reform will have profound social impacts. Its logic presupposes zero federal public spending growth while both population and income grow, which means reducing the per capita public spending and the spending as a proportion of the GDP. Additionally, while some expenditures will necessarily have a real increase, such as social security spending, others will be reduced under pressure from PEC limits, so as to reconfigure the Brazilian State. Finally, we argue that the only reason this fiscal reform is being discussed as a constitutional amendment is to remove mandatory minimum spending on health and education. Thus, PEC 55 renders any improvement in public health and education in Brazil impossible, on the contrary, it creates an opportunity for the dismantling of these areas and the elimination of their universal character.

Figure 1:   Minimum health and education spending under current rules and under PEC 55 *. 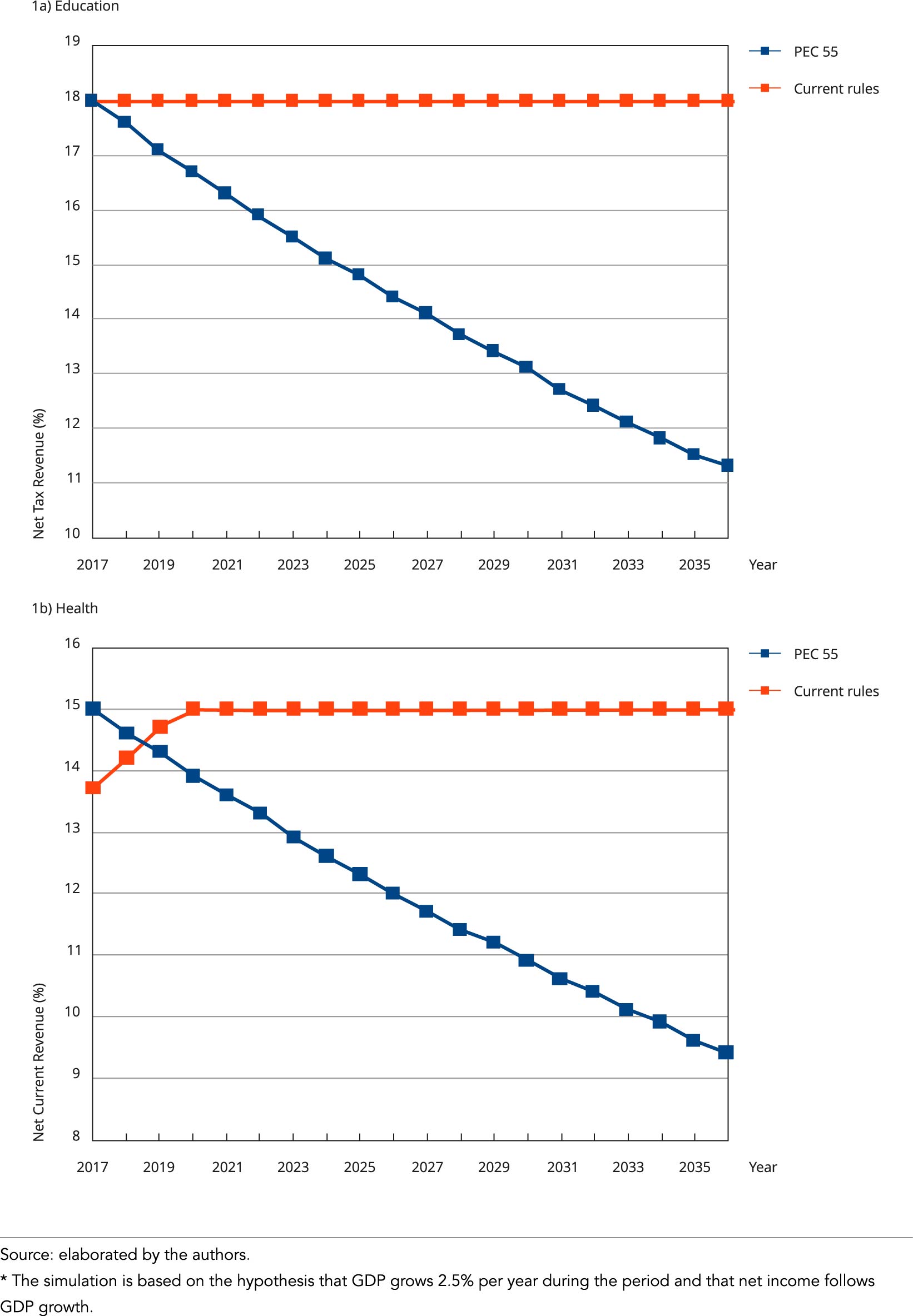 Figure 2:   Simulation of public expenditures under the New Fiscal Regime 2015-2036. 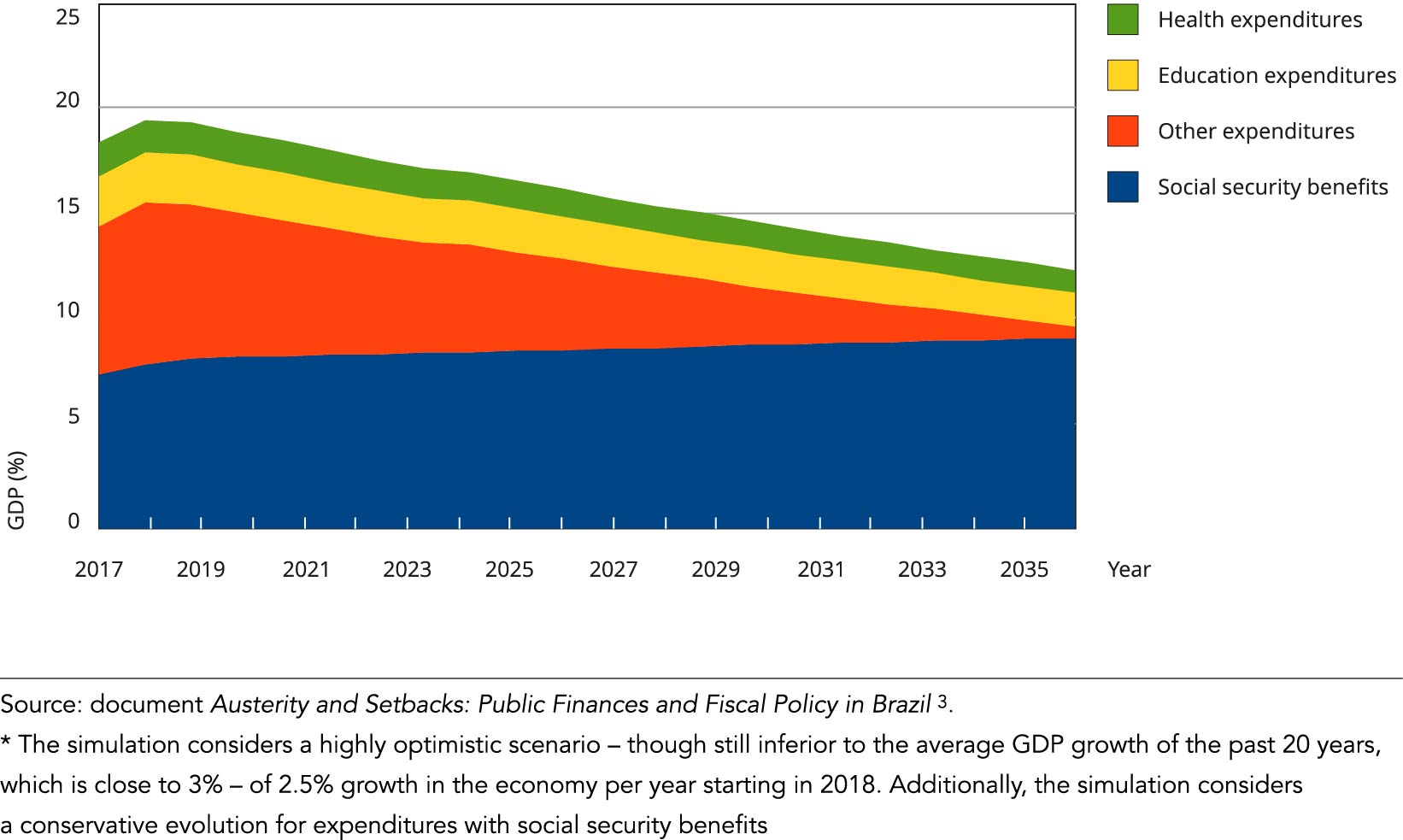