This study aimed to assess the association between overweight/obesity at different moments in the life cycle and body composition in early adulthood. Data were used from the 1982 Pelotas (Brazil) birth cohort study, which has followed live born children of families residing in the urban area of Pelotas at different ages. At 30 years of age, 3,701 cohort members were interviewed and body composition was assessed using Bod Pod, 2,219 cohort members had at least one weight and height measurement taken in the three periods (childhood, adolescence, and adulthood), 24% never presented overweight, and 68.6% were never classified as obese. Elevated body mass index (BMI) and percent body fat at 30 years of age were associated with individuals classified as overweight in all three periods or in adolescence and adulthood, while those with overweight/obesity only in childhood or adolescence showed mean BMI and percent body fat similar to those who had never presented overweight/obesity. The results indicate the benefit of early interruption of overweight/obesity.

In 1982, the maternity hospitals in the city of Pelotas, Rio Grande do Sul State, Brazil, were visited daily, births were identified, and newborns whose families lived in the urban area were examined and their mothers were interviewed (N = 5,914). These individuals have been followed several times at different ages. In 1984 and 1986, all households in the urban area of Pelotas were visited in search of the individuals born in 1982. Cohort members were weighed and measured and the mothers were interviewed. In 1997, a census was conducted in a systematic sample of 27% of the census tracts in the city of Pelotas in search of adolescents belonging to the cohort, and 1,077 individuals were interviewed and examined. In 2000, during routine medical examination for military service, male cohort members were identified and interviewed. In 2001, a new census was performed in the same tracts visited in 1997, and 1,031 cohort members were interviewed. Finally, in 2012, a new attempt was made to follow the entire cohort, and the interviews were conducted in the research clinic. Details on the cohort study's methodology have been published elsewhere 2020. Barros FC, Victora CG, Horta BL, Gigante DP. Metodologia do estudo da coorte de nascimentos de 1982 a 2004-5, Pelotas, RS. Rev Saúde Pública 2008; 42:7-15.), (2121. Horta BL, Gigante DP, Gonçalves H, Motta JS, Mola CL, Oliveira IO, et al. Cohort profile update: the 1982 Pelotas (Brazil) Birth Cohort Study. Int J Epidemiol 2015; 44:441e.), (2222. Victora CG, Barros FC. Cohort profile: the 1982 Pelotas (Brazil) Birth Cohort Study. Int J Epidemiol 2006; 35:237-42.), (2323. Victora CG, Barros FC, Lima RC, Behague DP, Gonçalves H, Horta BL, et al. The Pelotas birth cohort study, Rio Grande do Sul, Brazil, 1982-2001. Cad Saúde Pública 2003; 19:1241-56..

As mentioned above, the 30-year follow-up was done at the research clinic between June 2012 and February 2013. At this visit, weight was measured with the scale coupled to Bod Pod (COSMED, Chicago, USA) ‒ air displacement plethysmography ‒, and height was measured with a folding stadiometer (aluminum and wood), accurate to 0.1cm.

Body composition was assessed with Bod Pod. The equipment was assembled in a room with stable controlled temperature (21-24oC) and calibrated weekly by previously trained personnel. Pregnant or likely pregnant women (with more than two months in menstrual delay) were excluded. For taking measurements, the door to the room was kept closed to avoid sudden air flow. Subjects wore standard clothing (tight-fitting shorts and shirt/blouse), swimming cap, and no footwear or metal objects (bracelets, earrings, etc.). To measure body composition, subjects had to remain motionless inside the equipment (a closed chamber) for a few seconds. Having obtained body density, percent body fat was estimated by the equation for the general population 2525. Siri WE. Body composition from fluid spaces and density: analysis of methods. In: Brozek J, Henschel A, editors. Techiques for measuring body composition. Washington DC: National Academy of Science; 1961. p. 223-44.. Fat-free mass was estimated by the difference.

Overweight and obesity in childhood and adolescence were defined by the specific cutoff points for sex and age (BMI/age), according to WHO values. At 30 years, overweight was defined as BMI ≥ 25kg/m2 and obesity as BMI ≥ 30kg/m2 (2626. World Health Organization. Physical status: the use and interpretation of anthropometry. Report of a WHO Expert Committee. Geneva: World Health Organization; 1995. (Technical Report Series, 854).. Based on these definitions, participants were divided into eight groups according to presence of overweight or obesity in childhood, adolescence, and adulthood.

In the data analysis, the outcomes were measured continuously and linear regression was used to assess associations between different patterns of excess weight (overweight/obesity; obesity) and each outcome (weight, height, BMI, percent fat mass, and percent fat-free mass). Analyses were adjusted for birth weight, income at birth, maternal schooling, and maternal smoking during the pregnancy.

The study was approved by the Ethics Research Committee of the School of Medicine, Federal University of Pelotas (protocol: Of.16/12), and informed consent was obtained from participants in writing at each follow-up.

In relation to fat-free mass, individuals that were overweight either at all three follow-ups or in adolescence and adulthood had significantly lower fat-free mass than those who had never been overweight. The analyses on presence of obesity yielded similar results (Table 2).

Thumbnail
Table 2:
Body mass index (BMI), fat mass, and fat-free mass at 30 years of age according to overweight and obesity * at different moments in the life cycle. The 1982 Pelotas (Brazil) birth cohort study.

Our results corroborate findings from previous studies. Guo et al. 66. Guo S, Wu W, Chumlea W, Roche A. Predicting overweight and obesity in adulthood from body mass index values in childhood and adolescence. Am J Clin Nutr 2002; 76:653-8.), (2727. Guo SS, Roche AF, Chumlea WC, Gardner JD, Siervogel RM. The predictive value of childhood body mass index values for overweight at age 35y. Am J Clin Nutr 1994; 59:810-9., in the Fels Longitudinal Study, reported that individuals with high childhood BMI showed increased risk of elevated BMI at 35 years. In addition, the earlier the child developed overweight, the higher the odds of continuing with overweight in subsequent periods, and the higher the BMI in childhood, the higher the BMI in adulthood. In the same sense, in the study by Field et al. 99. Field AE, Cook NR, Gillman MW. Weight status in childhood as a predictor of becoming overweight or hypertensive in early adulthood. Obes Res 2005; 13:163-9., children in the upper range of normal or healthy weight (i.e., children between the 50th and 84th percentile of BMI for age and sex) also showed increased risk of becoming overweight or obese adults, compared to those below the 50th percentile.

Considering the current study's findings, the evidence suggests that on-going exposure to overweight or obesity is associated with increased body fat in adulthood. Meanwhile, individuals that only had one episode of overweight in childhood or adolescence presented body composition (BMI and percent body fat) that was similar to those who had never been overweight or obese.

One limitation to the current study could be selection bias. However, the occurrence of such bias is unlikely, since family income and BMI were similar in individuals included in (versus excluded from) the analysis (data not shown). Some key methodological features were history of overweight and obesity assessed at three moments in the life cycle and the use of an accurate measure of body composition in adulthood.

The current study's evidence suggests that on-going exposure to overweight or obesity is associated with high BMI and body fat and lower fat-free mass in young adults. The findings highlight the benefits of early interruption of overweight or obesity to reverse the repercussions on body composition in adulthood.

This article was produced with data from the 1982 Pelotas (Brazil) birth cohort study conducted by the Graduate Studies Program in Epidemiology at the Federal University of Pelotas, with the support of the Brazilian Association of Collective Health (ABRASCO) and Wellcome Trust. Previous phases of the study were funded by the International Development Research Center (IDRC), European Union, PRONEX, World Health Organization, Overseas Development Administration, Brazilian National Research Council (CNPq), and the Brazilian Ministry of Health. 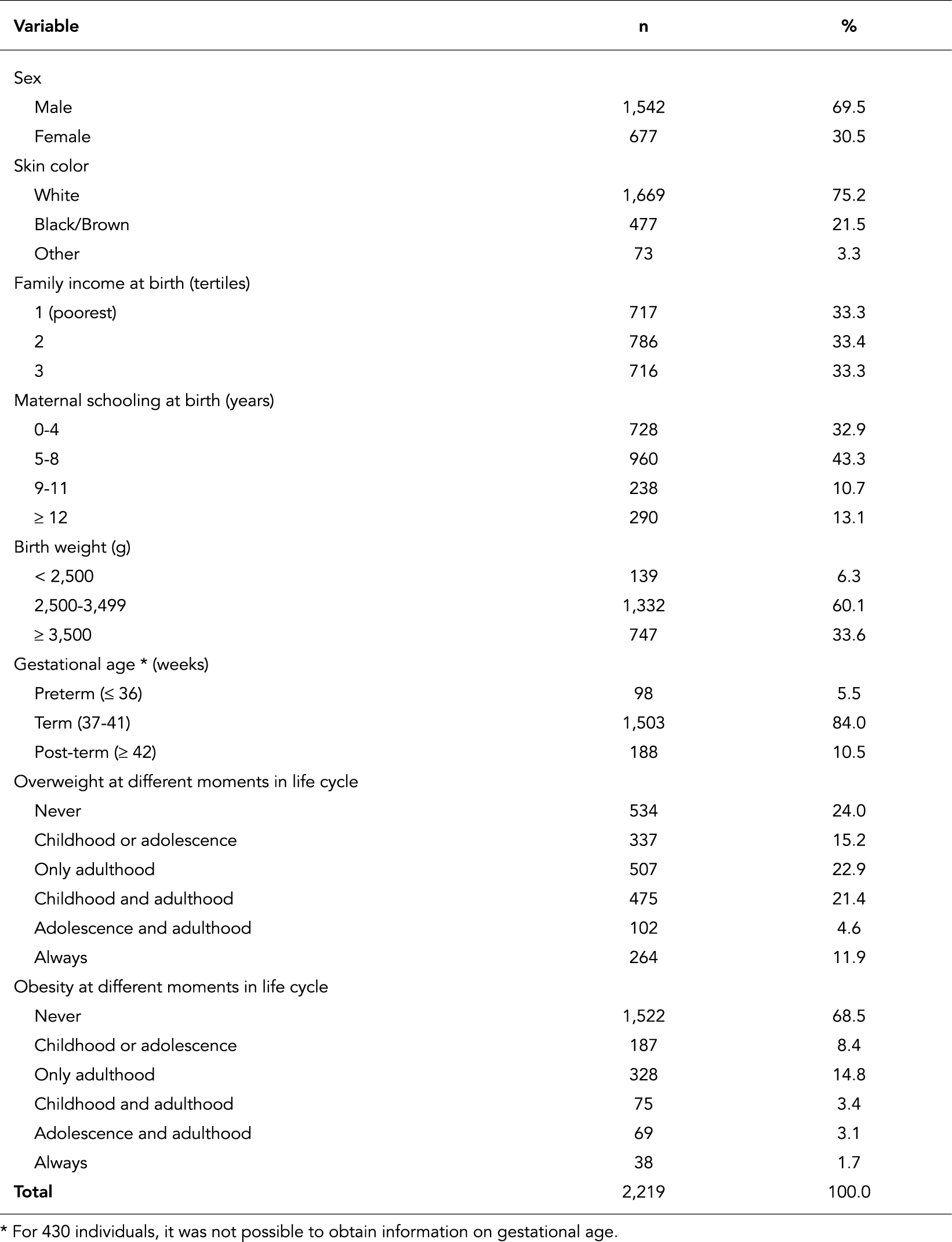 Table 2:   Body mass index (BMI), fat mass, and fat-free mass at 30 years of age according to overweight and obesity * at different moments in the life cycle. The 1982 Pelotas (Brazil) birth cohort study. 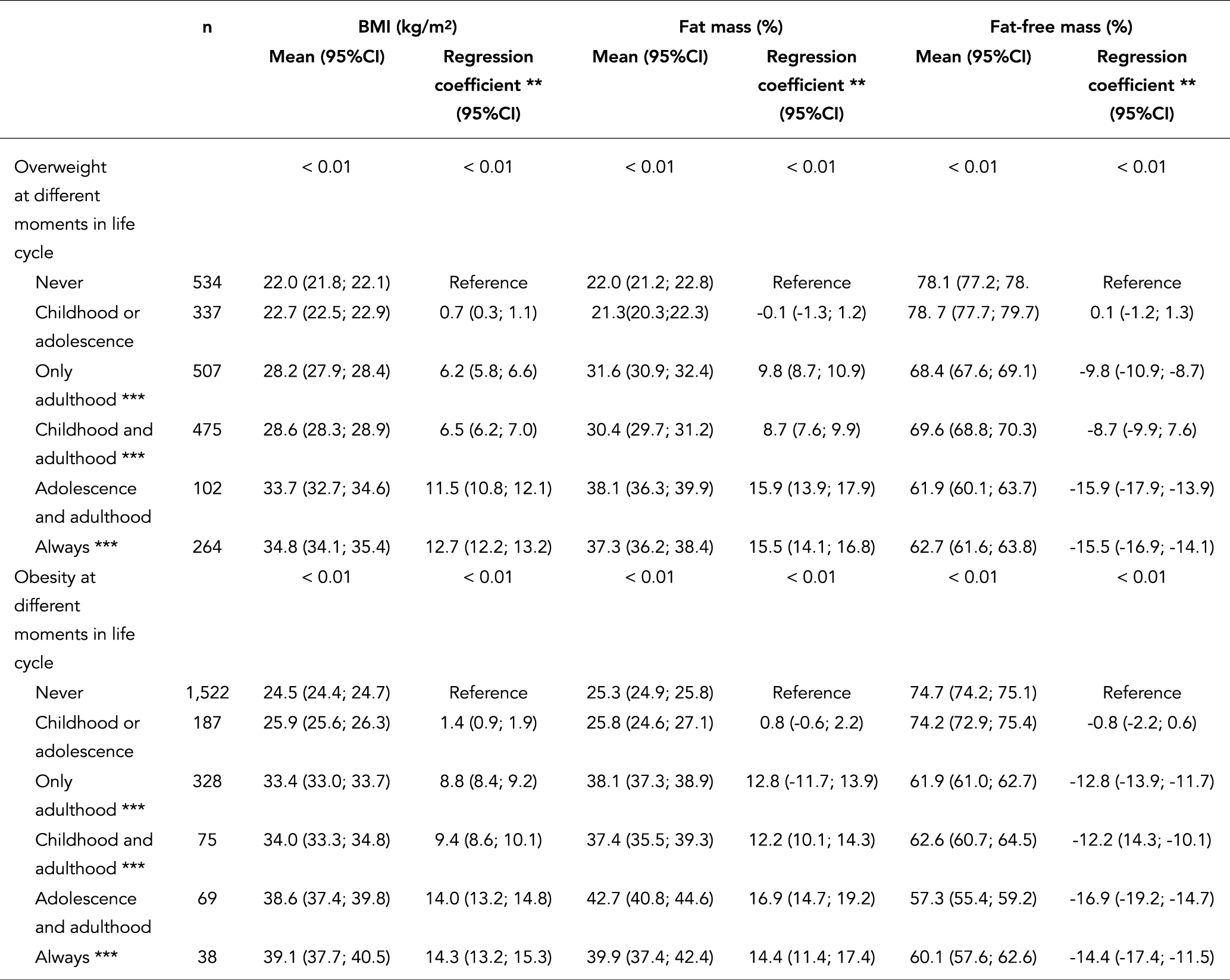