Bacillus cereus as the main casual agent of foodborne outbreaks in Southern Brazil: data from 11 years

Foodborne diseases are a global concern. In Brazil, the most prevalent pathogen found in foodborne outbreaks is Salmonella sp. (14.4%), followed by Staphylococcus aureus (7.7%), Escherichia coli (6.5%), and Bacillus cereus (3.1%). With the aim to perform a regional detailed analysis of foodborne intoxication, we analyzed 253 outbreaks’ profile reports to Food Surveillance team of the General Secretariat of Health Surveillance of Porto Alegre, Rio Grande do Sul State, between 2003 and 2013. In contrast to what was most notified in Brazil, in Porto Alegre the main outbreak agent identified was Bacillus cereus (32.2%) and, based on the patient symptoms, most cases were linked to enterotoxin production. The majority of the outbreaks were linked to the ingestion of food containing cereals or sauces poorly kept at environment temperature during the stock or preparation. We believe that, due to the compulsory use of pasteurized eggs in our city, Salmonella sp. outbreaks are less important here.

The occurrence of foodborne diseases has increased significantly worldwide. They are caused by ingesting food or water contaminated with chemical or biological agents, mainly viruses and/or bacteria 11. Hald T, Aspinall W, Devleesschauwer B, Cooke R, Corrigan T, Havelaar AH, et al. World Health Organization estimates of the relative contributions of food to the burden of disease due to selected foodborne hazards: a structured expert elicitation. PLoS One 2016; 11:e0145839.. According to the Department of Health Surveillance, Brazilian Ministry of Health, between 2000 and 2015, there were 10,666 foodborne diseases outbreaks in Brazil, affecting 209,240 people and with a mortality rate of 0.05%. Salmonella sp. was the most prevalent pathogen (14.4%), followed by Staphylococcus aureus (7.7%) and Escherichia coli (6.5%). Bacillus cereus was the fourth causative agent (3.1%). It is noteworthy that in most cases (58.5%), it was not possible to identify the microorganism associated with the outbreak 22. Secretaria de Vigilância em Saúde, Ministério da Saúde. Doenças transmitidas por alimentos: informações técnicas. http://foodsafetybrazil.org/surtos-alimentares-no-brasil-dados-atualizados-em-2015 (accessed on 28/Mar/2016).
http://foodsafetybrazil.org/surtos-alime... .

In the United States, most bacterial foodborne illnesses were caused by non-typhoid Salmonella spp. (11%) 33. Scallan E, Hoekstra RM, Angulo FJ, Tauxe RV, Widdowson M, Roy SL, et al. Foodborne illness acquired in the United States: major pathogens. Emerg Infect Dis 2011; 17:7-15.. It has caused one million of foodborne illnesses, with 19,000 hospitalizations and 380 deaths 44. Division of Foodborne, Waterborne and Environmental Diseases, National Center for Emerging and Zoonotic Infectious Diseases, Centers for Disease Control and Prevention. Pathogens causing US foodborne illnesses, hospitalizations, and deaths, 2000-2008. https://www.cdc.gov/salmonella/, and gov/salmonella/, and https://www.cdc.gov/foodborneburden/PDFs/pathogens-complete-list-01-12.pdf (accessed on 10/Jul/2017).
https://www.cdc.gov/salmonella/... . On the other hand, in Republic of Korea, where rice and grains are widely consumed, the potential risk of emetic syndrome associated to toxin-producing B. cereus was reported to be high 55. Kim JB, Jeong HR, Park YB, Kim JM, Oh DH. Food poisoning associated with emetic-type of Bacillus cereus in Korea. Foodborne Pathog Dis 2010; 7:555-63.. Furthermore, the B. cereus was the second most frequent causative agent associated to foodborne outbreaks in France between 2006 and 2014, followed by S. aureus66. Santé Publique France. Données relatives aux toxi-infections alimentaires collectives déclarées en France en 2013. http://invs.santepubliquefrance.fr/Dossiers-thematiques/Maladies-infectieuses/Risques-infectieux-d-origine-alimentaire/Toxi-infections-alimentaires-collectives/Donnees-epidemiologiques (accessed on Dec/2015).
http://invs.santepubliquefrance.fr/Dossi... . Its importance in this country is partly due to the participation of national health and food safety authorities in the epidemiological and microbiological investigations of suspected foodborne outbreaks 77. Glasset B, Herbin S, Guillier L, Cadel-Six S, Vignaud M-L, Grout J, et al. Bacillus cereus-induced food-borne outbreaks in France, 2007 to 2014: epidemiology and genetic characterisation. Euro Surveill 2016; 21:30413.. B. cereus is recognized as an opportunistic pathogen, causing gastrointestinal symptoms associated with the production of cereulide (emetic toxin) or enterotoxin (diarrheal syndrome associate). Therefore, the selective enrichment of emetic strains and the ability to sporulate made these organisms able to enter easily in the food chain; consequently, they are of great concern in recent years 88. Ehling-Schulz M, Fricker M, Scherer S. Bacillus cereus, the causative agent of an emetic type of food-borne illness. Mol Nutr Food Res 2004; 48:479-87..

Thus, the aim of this study was to evaluate the data from foodborne outbreaks notified in Porto Alegre, Rio Grande do Sul State, Brazil, that were associated to B. cereus.

Patients’ and suspected foods’ samples were collected for analysis by the Regional Reference Laboratory (LACEN/RS), according to the compendium of methods for microbiological examination of foods of the American Public Health Association 1111. Kramer JM, Gilbert RJ. Bacillus cereus and other Bacillus species. In: Doyle MP, editor. Foodborne bacterial pathogens. New York: Marcel Dekker Inc.; 1989. p. 21-70., as part of the outbreak surveillance program investigated in our city. The definition of incriminated food and causative agent is based on the epidemiological-clinical data collected during the investigation. The final report (Figure 1b; Form 5) of the outbreak is inserted in the SINAN 1010. Departamento de Vigilância Epidemiológica, Secretaria de Vigilância em Saúde, Ministério da Saúde. Manual de doenças transmitidas por alimentos. Brasília: Ministério da Saúde; 2010..

Snack bar: the food was prepared and/or ate at this type of premise, such as pastel, sandwich, cake, fried eggs, and hot dog;

Food with sauce: all foods prepared with sauce, such as meat, vegetables, pasta, shrimp, and cream soup;

Cereals: all foods prepared with cereals, such as bean, lentil, and rice;

Others: any other food associated to an outbreak.

Considering only the outbreaks associated with B. cereus, 2,435 (17/100,000 inhabitants/year) people were exposed and 346 (2.4/100,000 inhabitants/year) became ill. The central area of the city recorded the highest number of cases (50%), followed by the northwestern area (21%). The mean time between the onset of symptoms and the notification was 2 days, and between notification and investigation was less than 1 day.

Among the affected, 182 (52.6%) were men, and most were aged between 20-49 years (64.7%). The main symptoms reported by the affected were: diarrhea, cramps, and sickness. The mean incubation time was 12 hours (IQR = 5.75 hours). Three patients (0.87%) were hospitalized, and no deaths were reported. Table 1 summarizes the characteristics of the patient cases. We found that, in 73% of the cases, the suspected food was prepared and eaten in restaurants; moreover, snacks and foods with sauce were the main incriminated foods. The causative factors were: to be exposed to ambient temperature for over two hours (17.6%) or stored in inadequate temperature (16.2%) (Table 2).

Porto Alegre is a city with 496,682km² area and 1,409,351 inhabitants. In our study, most of the cases (50%) were reported in the central region of the city. This data is reasoned by the pronounced number of people who work in this region, plus the considerable number of inhabitants (276,799) and, in addition, approximately 20% (7,771) of the total food service establishments are located in the city center. Another argument is the high Human Development Index - HDI (0.805 of 1.0), that indicates a high socio-economic and cultural level of the inhabitants, who can have more meals in restaurants and have a better understanding of the importance of food intoxication reporting 1212. Programa das Nações Unidas para o Desenvolvimento; Instituto de Pesquisa Econômica Aplicada; Fundação João Pinheiro. Atlas do desenvolvimento humano no Brasil 2013. http://www.atlasbrasil.org.br/2013/pt/perfil_m/porto-alegre_rs (accessed on Dec/2015).
http://www.atlasbrasil.org.br/2013/pt/pe... .

Several toxins have been described in B. cereus outbreaks, and they cause two types of foodborne diseases. The enterotoxins have been linked to the diarrheal form of the disease, while the cereulide has been linked to emetic form 1313. Stiles BG, Pradhan K, Fleming JM, Samy RP, Barth H, Popoff MR. Clostridium and Bacillus binary enterotoxins: bad for the bowels and eukaryotic being. Toxin 2014; 6:2626-56.. In the diarrheal syndrome, toxin production occurs after the bacterial growth in the patient guts (8 to 24 hours of incubation), while in the emetic syndrome the cereulide, the toxin is formed and consumed within the food 1414. Ehling-Schulz M, Frenzel M, Gohar M. Food-bacteria interplay: pathometabolism of emetic Bacillus cereus. Front Microbiol 2015; 6:704..

In our study, the mean incubation period reported by the affected patients was 12 hours and the most common symptom was diarrhea, followed by abdominal pain. These results assume that most of the outbreaks were associated with diarrheal syndrome. This situation is similar to that found in Hungary, Finland, Bulgaria, and Norway, where the B. cereus diarrheal-type intoxication has been reported more frequently than the emetic syndrome 1111. Kramer JM, Gilbert RJ. Bacillus cereus and other Bacillus species. In: Doyle MP, editor. Foodborne bacterial pathogens. New York: Marcel Dekker Inc.; 1989. p. 21-70..

As reported in other studies, B. cereus could enter the food production chain at different points due to its ability to sporulate 1616. Nicholls M, Purcell B, Willis C, Amar CF, Ranagarajah S, Chamberlain D, et al. Investigation of an outbreak of vomiting in nurseries in South East England, May 2012. Epidemiol Infect 2016; 144:582-90.. Furthermore, the months of May, November, and December were those with the highest incidence of cases. These months are characterized by heat and humidity, favoring the microbial proliferation.

According to the Food Surveillance team, Salmonella sp. is not the most prevalent pathogen in Porto Alegre. A hypothesis for explaining this finding is that in only 55.14% of the cases it was possible to identify the pathogen. The substantial number of cases with unidentified agent can be explained by the difficulty in recovering the food due to a late notification. Another situation that contributed to these results was the implementation of a program to prevent and control the Salmonella’s outbreaks by restricting the use of raw eggs in commercial food services. In addition to that, this result can be justified by actions of the Department of Food Surveillance from Porto Alegre, Ministry of Agriculture, South Association of Poultry, and the State Department of Health on the production and trading of poultry and eggs in the Southern state, with focus on inspections, sanitary education, and more control over the raw materials that can carry the Salmonella sp. to food.

Finally, our findings show the importance of B. cereus in foodborne diseases, and the need for constant monitoring these cases to detect failures in the food preparation process.

We thank the surveillance departments on food and epidemiology of the city of Porto Alegre, for providing the data used in this work. 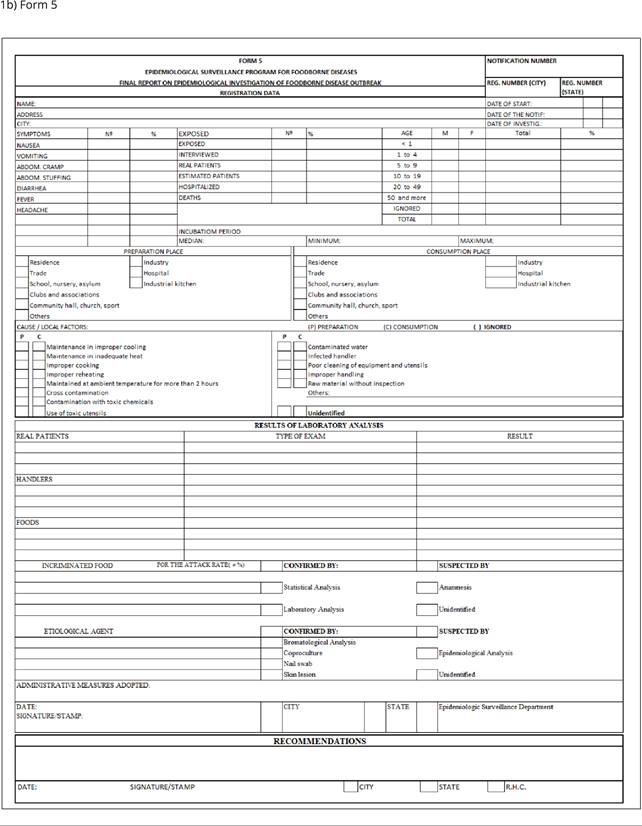