The establishment of the bond between mother and baby in the postpartum period is important for ensuring the physical and psychological health of both. This short communication reports the first phase of the cross-cultural translation and adaptation to the Brazilian context of the Postpartum Bonding Questionnaire (PBQ). Four aspects of equivalence between the original scale and the Portuguese version were evaluated: the conceptual, semantic, operational and item equivalences. Literature review, the study of PBQ history, translation, expert evaluation, back-translation and pretests involving 30 mothers with children aging up to 7 months using a primary healthcare unit were conducted. Each step demonstrated the need for adjustments, which were made during the adaptation process. At the end of the study, a version of PBQ in Brazilian Portuguese equivalent to the original one was obtained, offering promise for national studies on the mother-baby bond, and its influence on health, and for use in health services.

This article aims to present the first phase of the translation process and cross-cultural adaptation of the Brazilian version of PBQ.

Thumbnail
Figure 1
Flowchart of the first stage of the translation and cross-cultural adaptation of the Postpartum Bonding Questionnaire (PBQ) version in Brazilian Portuguese.

For the evaluation of the conceptual and item equivalences, a bibliographic review of the construction process and other cross-cultural translations and adaptations of the PBQ were conducted. In addition, a review of the literature on mother-baby bonding0 theory and its correspondence with the Brazilian reality was made. This content was discussed with three experts in perinatal mental health with extensive clinical and research experience, who also analyzed the components of the PBQ and its applicability to Brazil.

For evaluation of the semantic equivalences, the original instrument was translated by three professional translators, who are natives in the Portuguese language and English teachers. The synthesis was carried out by the researchers responsible for the adaptation of the instrument. Initially, the different translations were compared, and the discrepancies of meanings, concepts and contexts were analyzed. When there was no difference in meaning, the researchers chose the best translation. In cases in which significant disagreements of meaning occurred, one of the original authors of the instrument was consulted regarding the original meaning of the item.

This step generated the first version of the PBQ, used in a pretest conducted with 16 mothers over 18 years old with babies aging 1-6 months, living in a low-income community, who had appointments in a unit of the Family Health Strategy (FHS) in the city of Rio de Janeiro, Brazil. During the scale administration, when a woman expressed doubt regarding the meaning of an item, the interviewer explained the meaning of the item and asked for suggestions of synonyms. In addition, mothers were asked what they understood by certain items to verify the intended understanding. At the end, each woman was asked her opinion of the questionnaire.

Changes and adjustments were then made to improve the instrument, and a second version was administered to 14 women with babies from 1 to 7 months in the same health unit as the first pretest. Finally, the back-translation was performed by a native translator in British English and presented to one of the authors of the PBQ. The conceptual, item, semantic and operational equivalences of the Brazilian final version of the PBQ were evaluated by specialists in psychometry and perinatal mental health together with the researchers and one of the authors of the original scale.

This study was conducted according to Resolution n. 196/1996 of the Brazilian National Health Council, which sets the standards for research involving human subjects, issued by the Research Ethics Committee of the Sergio Arouca National School of Public Health, Oswaldo Cruz Foundation, under CAAE 21982613.6.0000.5240. All the participants assigned a free and informed consent.

The literature review and the opinion of the specialists confirmed that both the latent variable and the PBQ scale were relevant to the Brazilian reality. From the initial translation, discrepancies in meaning between the translators in items 4 and 7 were observed. Based on the response of an author of the scale, the word “cuddle” was translated as “ninar” and “winds me up” for “dar nos nervos” (Table 1).

In the first pretest, problems were identified in the understanding of some items. In item 3, the first translation was “Me sinto distante do meu bebê”. However, many mothers understood this as only referring to physical distance. In order to emphasize the emotional connotation of this distance, the word “emocionalmente” was included (Table 1). Another item that showed divergence in understandings was item 23, for which the initial translation was: “Sinto que a única solução é outra pessoa cuidar do meu bebê”. Many mothers chose the “always” answer, because they had to go back to work and, therefore, had to leave their children with another caregiver or in a daycare setting. The consulted author of the scale explained that, in England, such problem of understanding for the original English language item did not occur. One of the factors that may have influenced this difference is that in Brazil, the return to work for many women occurs a few months after delivery, unlike English’s women, who tend to have a longer maternity leave period (Table 1).

In the second application of the pretest, the adjustments that had been made improved the understanding of the items by the mother, confirming semantic equivalence with the original scale. The women were able to understand and answer all the questions and found the scale very interesting and easy to understand. Analog-scale response options were able to accurately capture the frequency of each question.

Experts in psychometrics and perinatal mental health considered that the final version of PBQ seems appropriate to assess the bond between mother and baby in the Brazilian context. The reverse translation was approved by one of the PBQ authors.

This initial process of cross-cultural translation and adaptation of PBQ demonstrates the importance of evaluations of conceptual, item, semantic and operational equivalence to obtain an adequate instrument for assessing the postpartum mother and baby bond in the Brazilian context and to ensure equivalence with the original scale. Thus, it allows the generalization and comparability of its results with other sociocultural and language contexts.

At the end of this initial process of transcultural translation and adaptation, a first version of PBQ in Brazilian Portuguese (Table 1) was obtained, which seems to be promising. Studies in progress by the research group will complement the psychometric evaluation steps of the instrument, through the evaluation of test-retest reliability, dimensional structure and construct validity, thus continuing the validation process of PBQ in Brazilian Portuguese 1414. Borsa JC, Damásio BF, Bandeira DR. Cross-cultural adaptation and validation of psychological instruments: some considerations. Paidéia (Ribeirão Preto) 2012; 22:423-32.,1515. Reichenheim ME, Moraes CL. Operacionalização de adaptação transcultural de instrumentos de aferição usados em epidemiologia. Rev Saúde Pública 2007; 41:665-73.. This instrument offers potential for future research and for use in perinatal mental health clinics.

Thumbnail
Figure 1
Flowchart of the first stage of the translation and cross-cultural adaptation of the Postpartum Bonding Questionnaire (PBQ) version in Brazilian Portuguese.
Thumbnail
Table 1
Original version in English and final version of the items in Brazilian Portuguese Postpartum Bonding Questionnaire (PBQ).

Figure 1   Flowchart of the first stage of the translation and cross-cultural adaptation of the Postpartum Bonding Questionnaire (PBQ) version in Brazilian Portuguese. 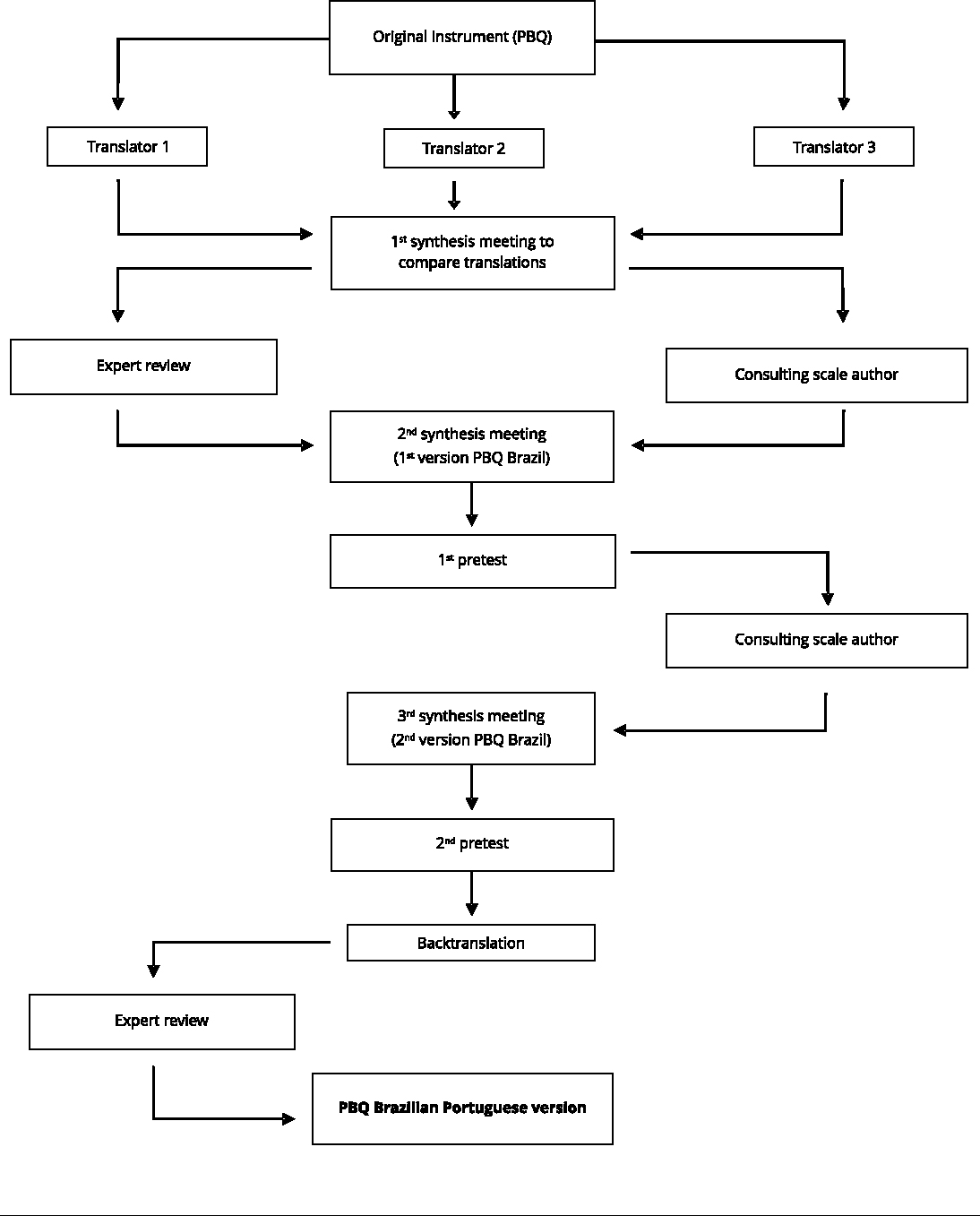