Dogs are the main reservoirs in the domestic transmission cycle of visceral leishmaniasis, and the diagnosis is essential for the effectiveness of the control measures recommended by the Brazilian Ministry of Health. We assessed the diagnostic performance of the ELISA-Vetlisa/BIOCLIN prototype with serum samples from 200 dogs, in triplicate, including symptomatic, oligosymptomatic, asymptomatic, and healthy dogs, originated by two distinct panels (A and B) characterized by parasitological tests as the reference standard. In this study, the prototype kit showed a 99% sensitivity (95%CI: 94.5-100.0) and a 100% specificity (95%CI: 96.4-100.0). The sensitivity of the prototype kit did not vary significantly with the clinical status of the dogs. Considering the final result classification (positive or negative), agreement between the results of repeated tests was almost perfect (kappa = 0.99; 95%CI: 0.98-1.00). ELISA-Vetlisa/BIOCLIN is a promising option for the serological diagnosis of canine visceral leishmaniasis in Brazil.

In this context, the company BIOCLIN developed a commercial ELISA kit using rK39 as antigen (Vetlisa/BIOCLIN, Belo Horizonte, Brazil). However, at the moment, reference centers in Brazil have not assessed commercial ELISA rK39 LVC kits. This study evaluated the performance of this prototype in a sample of dogs, using a well-defined reference standard and blind analysis for the diagnosis of CVL in infected and non-infected dogs from endemic areas of Brazil.

This study was a retrospective diagnostic test evaluation, with samples previously collected in two studies (panel A and B), kept under guard, and monitored using the serological panel database of the Parasitic Diseases Service, Ezequiel Dias Foundation(Minas Gerais State, Brazil).

In panel A, we assessed 1,440 serum samples obtained from dogs from the municipalities of Bauru (São Paulo State), Brasília (Federal District), Palmas (Tocantins State), and Fortaleza (Ceará State), between 2009 and 2010. In each selected municipality, three distinct, non-continuous neighborhoods with the highest prevalence of CVL were studied. Dogs were selected by active search, by house-to-house visits, following a systematic sampling procedure. Inclusion criteria were dogs whose owners had lived in the study region for at least six months; dogs whose owners were of legal age and qualified to sign the informed consent form; dogs aged eight months and older; dogs in conditions of being submitted to sedation; and dogs without previous clinical evaluation or laboratory diagnosis for CVL. The exclusion criteria were pregnant female dogs; dogs that got aggressive with handling; stray dogs; and dogs undergoing anti-Leishmania chemotherapy.

In panel B, we assessed seventy-five serum samples obtained from dogs from the endemic municipality of Betim (Minas Gerais State) in 2015. The dogs were selected by active search by the Zoonoses Surveillance Unit (ZSU) of Betim or by the owners’ spontaneously bringing the animals to ZSU. Inclusion criteria were dogs whose owners resided in the study region; dogs whose owners were of legal age and qualified to sign the informed consent form; dogs aged four months and older; dogs in conditions of being submitted to sedation and dogs a with previous serological diagnosis for CVL (ICT Dual Path Platform rK28 and ELISA/Bio-Manguinhos). Exclusion criteria were dogs that got aggressive with handling, dogs undergoing any anti-Leishmania chemotherapy.

A total of 200 serum samples were selected at random in the respective panels (100 positive and 100 negative), considering 90% sensitivity and 90% specificity with ± 6% error 1919. Banoo S, Bell D, Bossuyt P, Herring A, Mabey D, Poole F, et al. Evaluation of diagnostic tests for infectious diseases: general principles. Nat Rev Microbiol 2006; 4(9 Suppl):S21-31.. Positive samples were those with at least one positive parasitological test, and negative samples were those negative in all parasitological and serological tests. A total of 148 samples from panel A (6 asymptomatic, 13 oligosymptomatic, 29 symptomatic, and 100 negative samples) and 52 positive samples (11 asymptomatic, 10 oligosymptomatic, and 31 symptomatic) of panel B were used (Figure 1 and Supplementary Material. Box S1. http://cadernos.ensp.fiocruz.br/static//arquivo/suppl-e000413-20_9739.pdf). After sample selection, two aliquots of 100 microliters of each sample were taken from the freezer -80ºC. The samples were coded with a sequential and unambiguous number for each of them, from 1 to 200, by an analyst who did not participate in the execution of the Vetlisa/BIOCLIN tests.

The test was performed according to the manufacturer's instructions, considering the cutoff = negative control mean absorbance + 0.5 and calculating the index by dividing the absorbance of the sample by the cutoff value. All samples were tested in triplicate.

Accuracy evaluation was based on the cross-distribution of positive (asymptomatic, oligosymptomatic, and symptomatic) and negative samples, as detected by the reference standard, and the results of the Vetlisa/BIOCLIN test results of the 200 samples. Indeterminate results were excluded from the statistical analysis. We estimated sensitivity, specificity, and global accuracy with their respective 95% confidence intervals (95%CI).

The study was approved by the Animal Ethics Committee of the Ezequiel Dias Foundation (n. 016/18).

The Vetlisa/BIOCLIN test was performed in triplicate. All final classifications (positive or negative) were consistent across the repetitions, except one, coming from an infected dog, in which one of the replicates was considered undetermined (the other two were positive). This result was discarded from the sensitivity and specificity analysis.

As measured by the kappa statistic for the final classification provided by the test (positive or negative) for the three replications, agreement was almost perfect (kappa = 0.99; 95%CI: 0.98- 1.00). Agreement between three repeated measures of the “index values” for all samples was also almost perfect, as indicated by the intraclass correlation coefficient (ICC = 0.98; 95%CI: 0.98-0.99).

Our study provided evidence that the ELISA-Vetlisa/BIOCLIN prototype shows substantial sensitivity, specificity, and reproducibity. It is essential to point out that further studies regarding the specificity of this test are necessary, with the inclusion of positive samples for other pathogens.

Venturin et al. 3333. Venturin GL, Bragato JP, Silva KLO, Lima VMF. Recombinant K28 antigen in ELISA in the diagnosis of canine visceral leishmaniosis. Parasite Immunol 2015; 37:670-3. found 97% sensibility and 95% specificity for in-house rK39 antigen-based ELISA using a panel of dogs characterized with a direct examination in lymph node aspirate. Nevertheless, we should consider that the specificity might be underestimated in panels characterized with only lymph node aspirate because of the low sensitivity of the direct examination in this type of sample. Other authors observed contradictory values of sensibility and specificity when using ELISA rK39. Santarém et al. 3434. Santarém N, Silvestre R, Cardoso L, Schallig H, Reed SG, Cordeiro-da-Silva A. Application of an improved enzyme-linked immunosorbent assay method for serological diagnosis of canine leishmaniasis. J Clin Microbiol 2010; 48:1866-74. found values of sensitivity of 88% in symptomatic and 56% in asymptomatic animals when using ELISA rK39. Teixeira et al. 3535. Teixeira AIP, Silva DM, Vital T, Nitz N, Carvalho BC, Hecht M, et al. Improving the reference standard for the diagnosis of canine visceral leishmaniasis: a challenge for current and future tests. Mem Inst Oswaldo Cruz 2019; 114:e180452. observed sensitivity and specificity of 37% (95%CI: 27-49) and 83% (95%CI: 71-91) respectively. The choice of the reference standard, which included both conventional parasitological techniques and a combination of molecular tests in blood and bone marrow samples, might have influenced the results in the previous study. Variations in the results may also be a consequence of the quality of the diagnostic kit. For this study, we developed the diagnostic kit in an industrial setting. We used panels with different parasitological tests that guarantee the designated values of the samples and represent different transmission contexts of Brazil. However, we previously tested panel B using conventional serological tests, which may have contributed to overestimating the test performance. Additionally, the lack of the simultaneous application of the prototype evaluation and the standard reference tests may have also influenced the result.

The epidemiological role of asymptomatic dogs in the maintenance of the disease is still a matter of discussion, and many authors believe that the success of VL control measures relates to the effective diagnosis of asymptomatic dogs 3434. Santarém N, Silvestre R, Cardoso L, Schallig H, Reed SG, Cordeiro-da-Silva A. Application of an improved enzyme-linked immunosorbent assay method for serological diagnosis of canine leishmaniasis. J Clin Microbiol 2010; 48:1866-74.,3535. Teixeira AIP, Silva DM, Vital T, Nitz N, Carvalho BC, Hecht M, et al. Improving the reference standard for the diagnosis of canine visceral leishmaniasis: a challenge for current and future tests. Mem Inst Oswaldo Cruz 2019; 114:e180452.,3939. Duthie MS, Lison A, Courtenay O. Advances toward diagnostic tools for managing zoonotic visceral leishmaniasis. Trends Parasitol 2018; 34:881-90.,4545. Esteva L, Vargas C, Vargas de León C. The role of asymptomatics and dogs on leishmaniasis propagation. Math Biosci 2017; 293:46-55.. In this sense, it is auspicious to have a test such as the one evaluated in this study, in which the results are not substantially affected by the clinical status of infected dogs.

In Brazil, specificity is a crucial characteristic for ELISA because it is a confirmatory test. Considering the standardized antigens to improve the reproducibility of results in different Brazil regions, it is critical to implement and analyze validation studies on diagnostic tests for CVL.

Our study shows that Vetlisa/BIOCLIN prototype might be a promising option in association with other methods for diagnosing CVL. Nevertheless, a prospective phase III study is still required, using simultaneous assessments between standard reference tests and the rK39 ELISA in dogs from endemic areas. A more comprehensive range of diagnostic test options is essential for private laboratories and veterinary services in Brazil, given the increasing demand and public health impact.

The authors would like to thank Ezequiel Dias Foundation (Funed) for the support and infrastructure, and Oswaldo Cruz Foundation (Rio de Janeiro and Minas Gerais States), Brazilian Ministry of Health, and Zoonoses Surveillance Unit of Betim (Minas Gerais State) for all the assistance with sample collection and the characterization of panels. G. L. Werneck would like to thank the Brazilian National Research Council (CNPq) for the research productivity fellowship.

During the period this study was carried out, the co-author M. Thompson worKed at the company responsible for developing the assessed diagnostic kit. 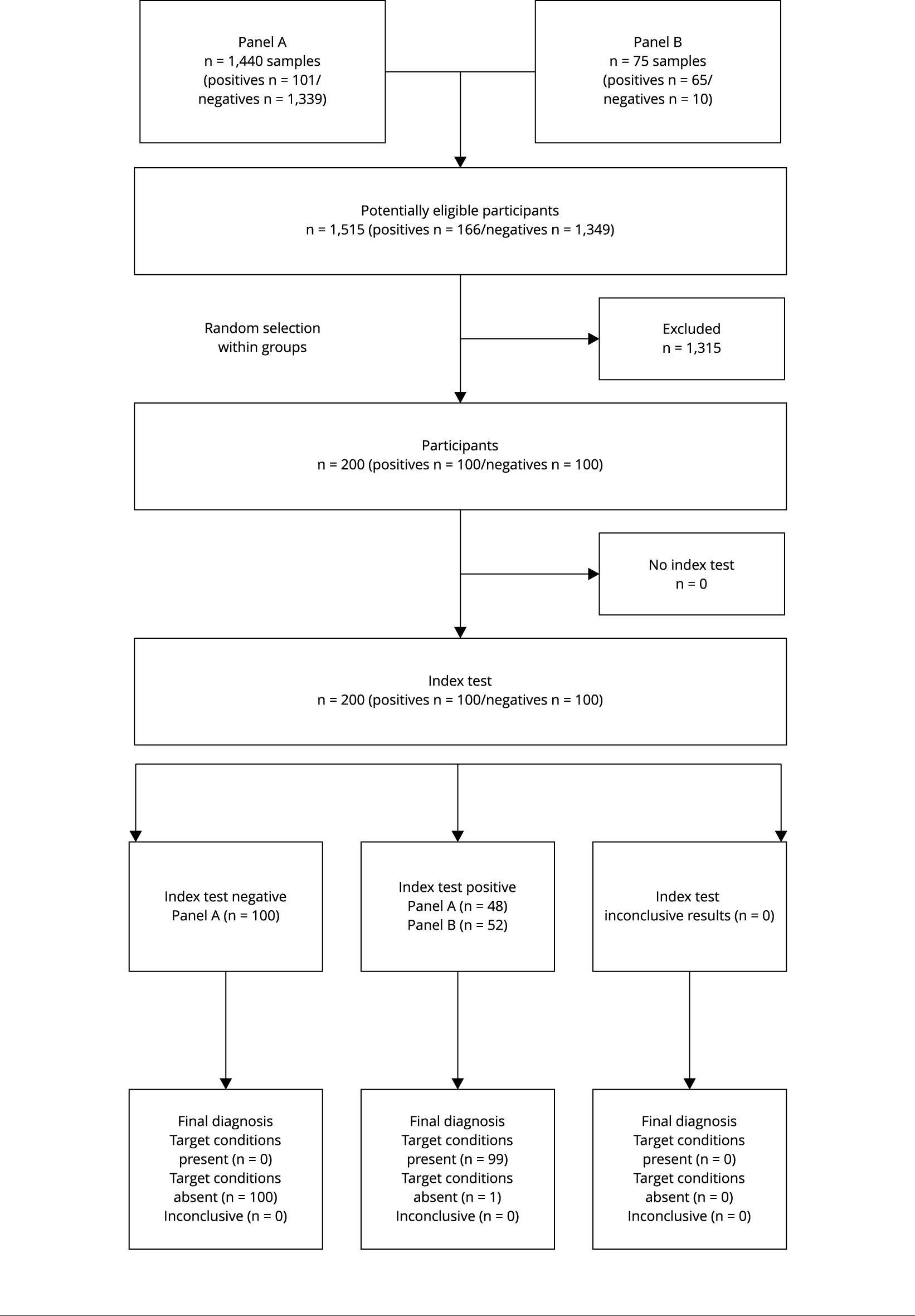 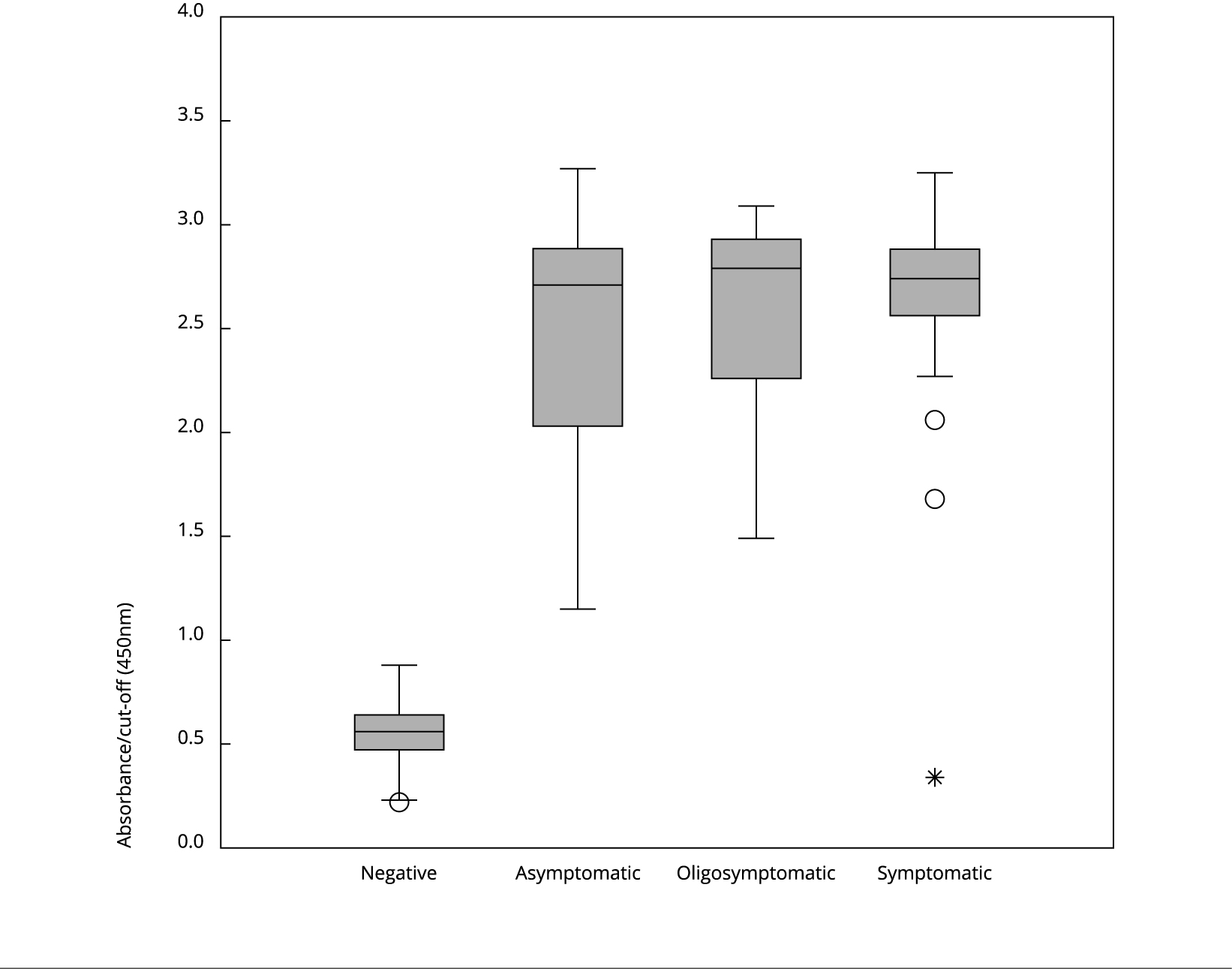